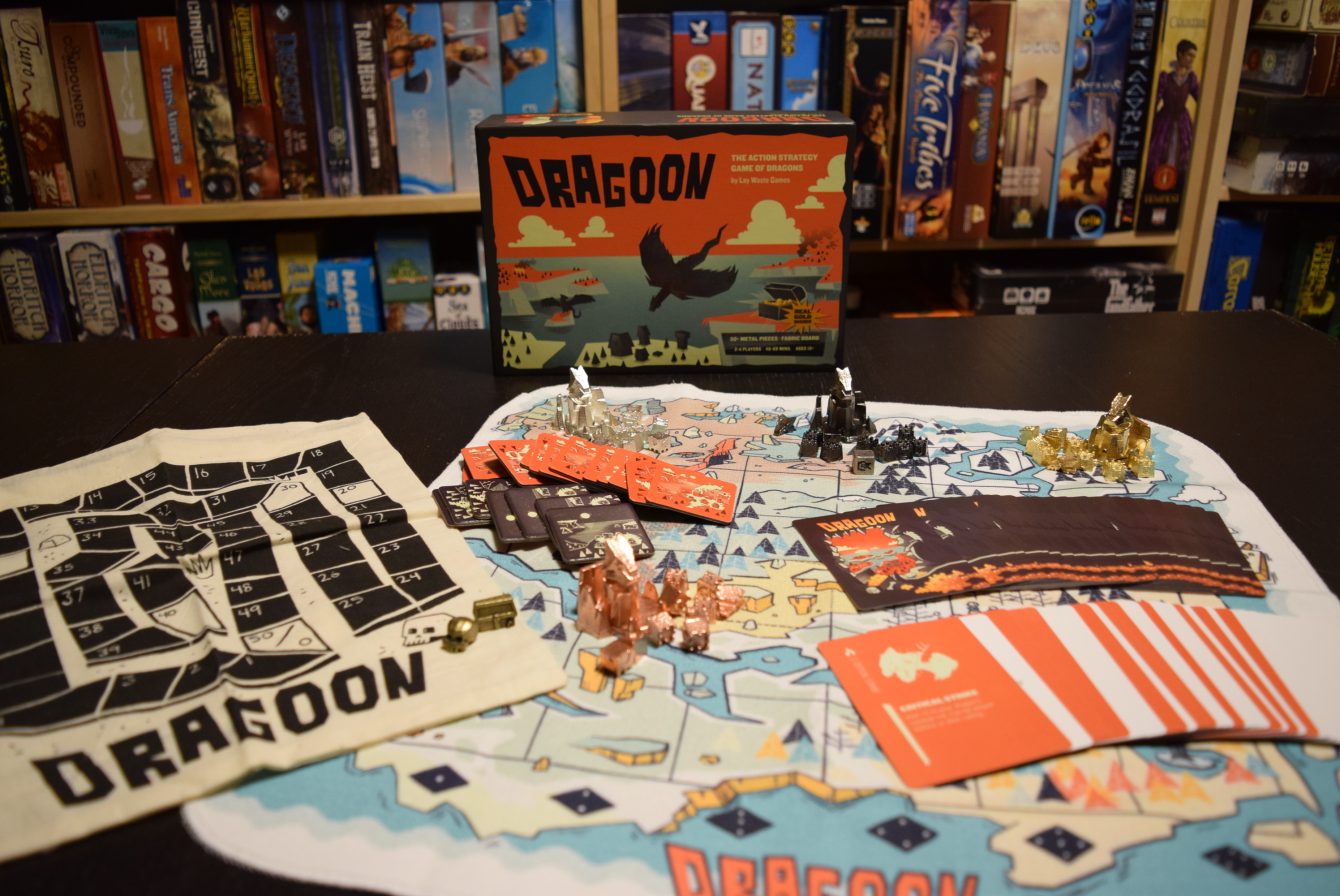 Dragoon is a pretty game with metal bits that are as awesome as they are expensive, but its gameplay mechanisms are heavily reliant on unmitigated dice rolls which can sometimes leave things arbitrarily one-sided.

To the classically geeky, dragons are something special.  Often found as the ultimate foes in adventures or as terrifying threshold guardians for forbidden treasures or trapped princesses (themselves a relic of the narrow-minded gender norms we eagerly seek to shed these days), dragons will always hold a special place in the myths and mythos of heroic storytelling.  No matter their role, no matter their scale, dragons are very nearly always depicted as nightmarishly powerful, insatiably greedy, and nigh invincible.

So if I were to offer you the chance to be one, you’d probably be interested, yes?

Andrew:  Our first encounter with Dragoon was a fleeting one, marked by immediate desire.  We were at a convention when a man walked by with a box.  I got a glance at the cover art and found my own quasi-draconic covetousness instantly engaged; call me shallow, but there was something about the stark, minimalist cover art which spoke to me.  But, alas, we were literally mid-meeting when I spotted it, and by the time we were free, it was gone.

The game mechanics of Dragoon are extremely simple.  Each player is a dragon (immediately fulfilling the game’s most audacious promise), with a lair out in the countryside.  Each round, optimistic humans, those bastions of hopeless industry, will raise a village, or possibly a city, somewhere on the game board.

Then each player takes their turn, moving their dragon over the countryside, spending action points and playing cards as desired.  By landing on a population tile, dragons can either destroy them for an immediate reward in gold, or claim them, thereby allowing these pathetic humans the privilege of paying that dragon tribute each round.

Andrew:  It would be nearly half a year later that we, at PAX East, found ourselves with the opportunity to actually sit down and play Dragoon .  As we poured out the bits from their curious cloth bags, I was astonished at the bizzare juxtaposition – a cloth, printed-on game ‘board’, contrasted against the heaviest, clankiest metal player pieces I had ever held.

Gold is the name of the game in Dragoon ; the game is essentially a race, with the first player to 50 gold triggering the endgame.  Gold is earned in several ways; the aforementioned destruction of population tiles provides a reliable trickle of that precious ore, though they will need to tromp from town to town to do their smashing.  However, there are riskier was of reaping much greater reward.

One way to grab gold is to steal from the Thief (an act of unadulterated irony).  Under certain conditions, the Thief will gain gold and stash it away on the map – a dragon who finds the thief’s treasure can loot it for gold.  Dragons can also steal from each other, though this is perilous, as it can only be done from within an opposing dragon’s lair, and you do not want to end your turn there.

Finally, by claiming population tokens, dragons stand a chance each round of earning gold for each of their tiles.  This mechanic, the ‘Tribute’ phase of the game, is dictated by a dice roll – roll well on this demonstration of your mighty dragon roar and you will be, well, rolling in gold.  Roll poorly and you may gain the bare minimum, or nothing, or, worse, watch as unimpressed villagers decide paying you tribute isn’t worth it – no dragon with a wimpy roar is getting any gold this way.

Andrew:  Jess and I sat down, learned the rules in less than 5 minutes, and were done with our first game in less than 20.  We then walked over to the Lay Waste booth (who showed the sort of business savvy necessary to let folks try their mostly-unknown game before purchasing it), and plunked down more money than I would normally be comfortable spending on a single game.  I’ll explain why, but to acknowledge the value of Dragoon , one must also address its weaknesses.

Dragoon is a fairly abstract game in some ways, albeit not a traditional Euro in any significant measure.  It is a game of moving your single piece around the board and either claiming or nuking tiles, ransacking gold stores where you find them, and doing your best to use your limited actions-per-turn to get ahead of your opponents.  There is certainly player contention, as it is totally legit to smash your opponents’ settlements to bits, but no player elimination. Dragoon is accessible, attractive as all hellfire, and quite fun to play…

Chaos, our old friend, comes to Dragoon in the form of a couple of 6-sided dice.  Rolls are used to determine the location and development of population tiles, as well as how well your dragons do during Tribute.  Looting other dragons’ lairs, as well as stealing from the Thief, is also resolved with a roll.  Outside of some cards to mitigate your luck (none of which, of course, are you ever actually guaranteed to draw), a huge part of Dragoon is entirely up to chance.

And that can be infuriating.

Especially early in the game, if the rolls for populations place them all near your opponent, it may be a full turn or two before you can manage to trundle your way across the map and either smash or claim those spots for yourself – turns during which your lucky opponent can get a nice fat lead, especially if she rolls particularly well on Tribute.  Or, worse, you may spend your precious turns securing settlements, only to watch powerlessly as your Tribute roll lands on a 1 and your allegedly supplicant villagers flip you the bird and toss off your colors.  It’s enough to make you want to burninate the countryside.

A constant reliance on random rolls is a true weakness in Dragoon and, despite my deep appreciation for dice and the chaos they bring, it can, arbitrarily and unfairly, leave a player in an undeniably, undeservedly better position than her competitors.  The dragon cards are interesting enough, letting you make tactical decisions and sometimes dramatically swing the game in a single turn, but ultimately, every time Dragoon is asking you to roll the dice, it is divorcing you, bit by bit, from that feeling of ultimate power that makes being a gods-be-damned dragon so incredibly appealing in the first place.

That said, Dragoon , which comes at an admittedly steep price tag, is itself a sort of treasure.  The game is eye-catching to say the least; I have never taken it out at a game night or get-together and not had everyone comment on its attractiveness.  The metal bits, the clear reason for the game’s cost, look and feel amazing – the standard version had heavy, painted metal pieces, and the new special edition is made of actual precious metals, with shining copper, gold, silver, and black nickel adding a presence and weight to the game that is as awesome as it is pricey.  The art, from Nick Nazzaro is some of the prettiest in any game I own.  How much that may be true or worthwhile for you is, of course, a personal measure.

Gameplay, of course, is what matters most, and in that regard, Dragoon lands better than average.  The puzzle it presents each turn is a simple but engaging one (for the most part), and we liked it best with 2 players, though it works well at all counts – at 4, it’s a slugfest, with dragons constantly in each others’ business, smashing and fighting in a great cacophony of cards and dice and flaming wreckage; good fun, for its measure of fun.

Where Dragoon feels weakest are the runs of bad luck, when players are either rewarded or punished completely at random, occasionally leaving someone reeling with no meaningful way of getting back in the game.  It’s too easy for the dice to turn on you, and the promise that everyone is at their mercy is a cold comfort when your last village leaves you and your opponent sweeps into a huge lead in the same turn.  Admittedly, it doesn’t necessarily happen all the time, but more agency would add tremendous value to this pretty game.

Andrew:  So, is Dragoon a good game?  Yes.  Good, but not great – its mechanical weaknesses are too pronounced to ignore.  However, did I happily shell out my cash for a copy?  Absolutely – though certainly fun enough to play (especially at 2 players), Dragoon is a talking piece, a coffee table game, something the collector in me simply takes pleasure in owning, like a dragon who just wants a pile of shinies, not for spending, but for having.

I swear I almost never pile it on the bed and sleep on it. 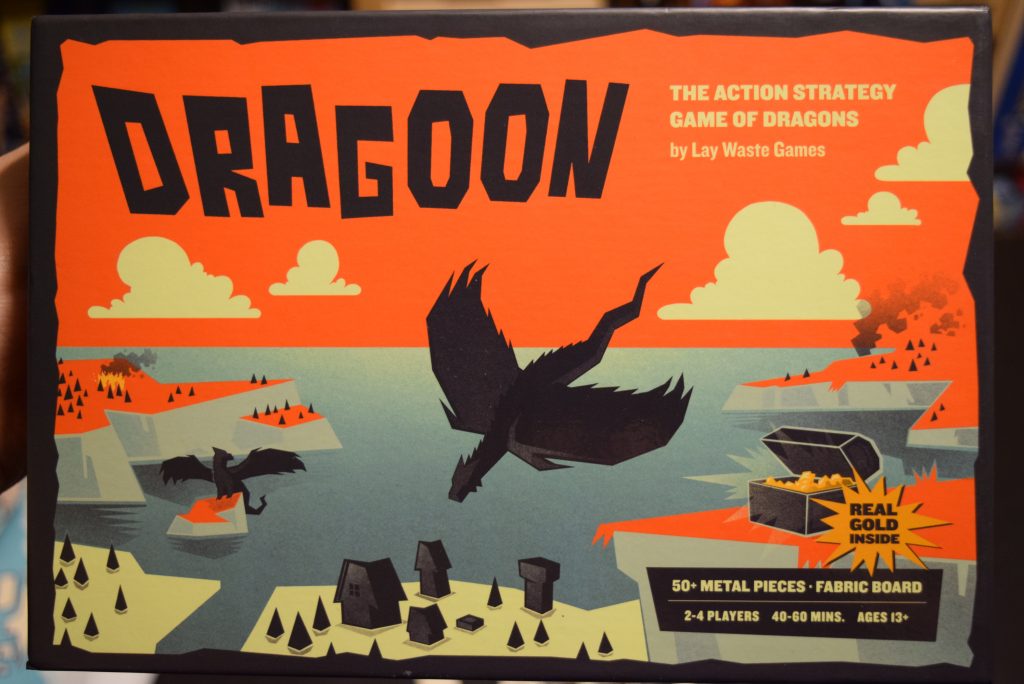 If you are interested in getting your own copy of Dragoon, it can be ordered directly from Lay Waste Games or found at a number of online retailers, such as Think Geek.

(Gameosity was given the premium bits to upgrade our personal copy of Dragoon to the Collector’s Edition.  We were not otherwise compensated.)

One thought on “Dragoon Review”