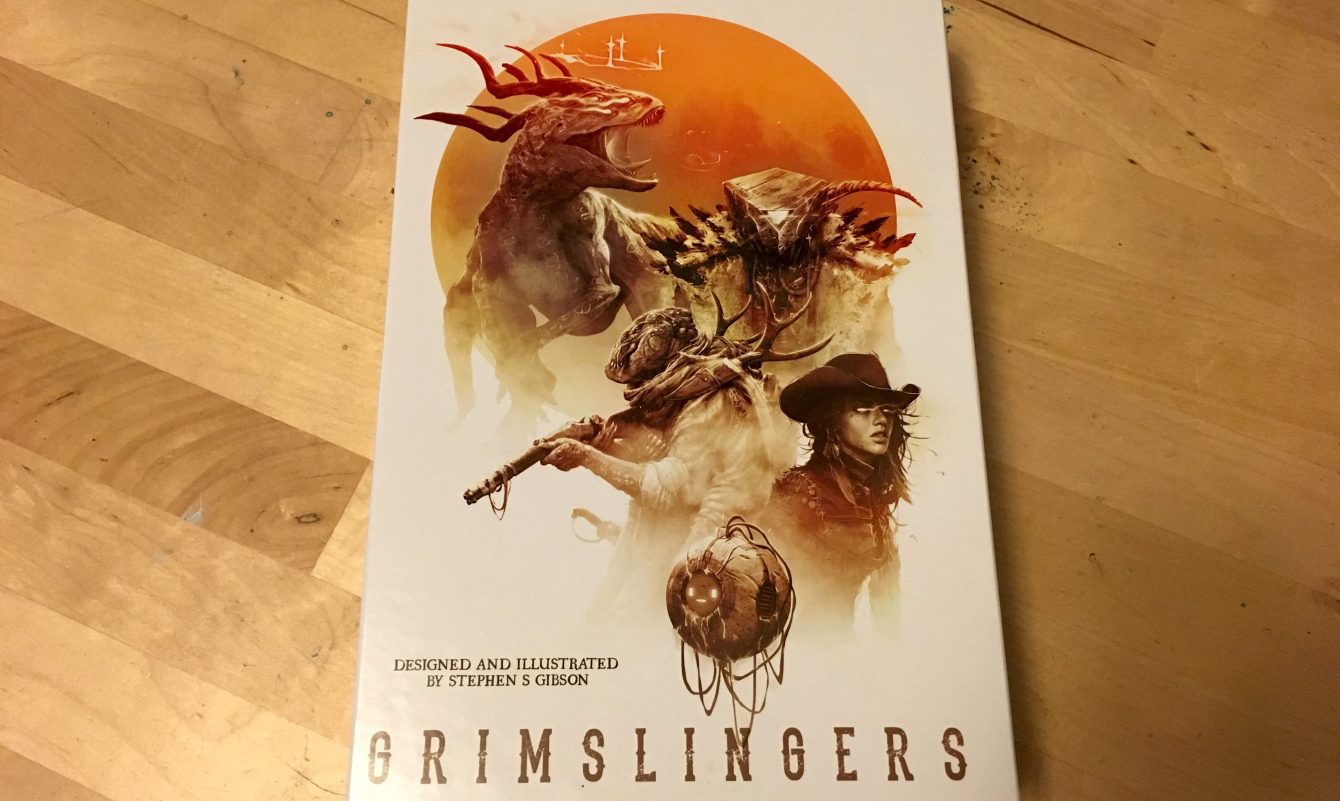 Grimslingers can be as entertaining as it is gorgeous, and offers up two distinct modes of play right out of the box.

Wow, okay, so yeah, Grimslingers. We previewed this game a while back (before the Kickstarter) and were, admittedly, not all fans of it due to a combination of unclear rules and our group generally not being big into direct competition. The artwork was certainly fantastic, though. So much so that Diana interviewed the game’s creator/designer/illustrator, Stephen Gibson, about his work. Now, after such a successful release it’s still difficult to find (at least without paying scalper prices) even after multiple printings, I’ve finally managed to get my hands on a copy and try out the final version.

I have MANY things to say about this.


The concept of Grimslingers is something that I (and most everyone else I explain it to) am quite interested in. It’s a card dueling game set in a sort of sci-fi fantasy Old West style world. Think Stephen King’s Dark Tower series (if you haven’t read it before, you go read right now because it’s flipping amazing) but with an unexpected – and very much appreciated – undercurrent of humor. Players take on the role of a titular Grimslinger: one of a posse/small army of very diverse and talented individuals under the tutelage of The Iron Witch. It’s… there’s a lot of world building stuff to talk about so I’ll mostly stop here so as to not waste much more time before getting to actual game stuff. But I will say this: between the rulebook, the campaign booklet, and the flavortext on most of the cards, there’s a remarkably vivid picture being painted here using a surprisingly conservative amount of words.


When I say the Grimslingers themselves are a diverse crew, I mean they’re exceptionally diverse. Not just in a “men, women, ethnicity” sort of way, either. Depending on whether you have the base game or paid a few bucks extra for the add-on packs, you can play as anything from a woman who teams up with a scholarly bear, to a bank-robbing cat being followed around by the spirit of his former partner, to The Iron Witch himself. And of course the art is spectacular. I’ll also avoid gushing too much about the artwork, mostly because we already did recently, but my god this game is gorgeous. I seriously would buy frame-able prints of several of the character portraits if that were an option.

Another thing I really love about the “heroes” in Grimslingers is that they’re all functionally the same by default. When you set up your character you select a bunch of different cards that determine who you’re playing as and will track your health and energy, but it’s all purely cosmetic. You’re not any different from your opponents (or teammates, depending on which mode you’re playing), and that’s great because there are so many wonderful characters to play as you’ll never have to pick stats or skills over aesthetic preference. The stat tracking cards are also all functionally the same, but each has a slightly different “personality” (i.e. brief lines of dialog). In other words you can somewhat customize your character’s personality if you want to. Or you could just treat the stat trackers like stat trackers and envision your own personality if you’d like.


The lack of mechanical differences between the characters doesn’t mean you can’t have a unique Grimslinger, though. Whether you’re playing the cooperative Tall Tales mode or using the advanced rules in a duel, you’ll be able to choose a class and use signature spells. Classes determine your Grimslinger’s max health and energy levels, as well as grant them a unique ability such as healing or powering up elemental spells. Signature spells are powerful (and costly) unique magics that can do all sorts of wild stuff – and every single signature spell is unique. So yeah, while the characters themselves are all mechanically the same by default, they can all end up being pretty different and unique once you’re done setting them up.

Right, on to the actual gameplay.

Grimslingers is basically two different games in one. Dueling is purely competitive, with two to six players going toe-to-toe with each other in a free-for-all or in teams. It works sort of like a game of Rocks, Paper, Scissors but more complex and with magical cowboys and possessed dogs and stuff. The goal is to be the last Grimslinger standing as you chuck spells at your opponents, use items to give you an edge, and generally try to get into everyone else’s head to predict what they might be planning.

Objectively, this makes for an interesting game. I can understand why it might appeal to other players as it requires a fair bit of mind games and (generally speaking) can be pretty quick to play. My one real gripe is that there are a lot of somewhat fussy rules to remember. You have to pay attention to a spell’s “RN” (essentially it’s speed), some elements will cancel out or be cancelled out by others, and the various terminologies can be confusing to new players (discard versus deactivate, for example). Then there are face-offs: blackjack-style number card draws that occur when players who have both played spells against each other on the same turn (imagine the spells clashing into and pushing against each other) need to figure out who comes out the victor – so long as one doesn’t immediately cancel out the other, of course. All of these elements taken separately don’t seem like much to deal with, but when you have to stay on top of them all at once it can start to feel pretty fiddly.


Subjectively, however, I’m not a fan of duels. None of us at Gameosity are, really. We all prefer either cooperative play or indirect competition over games that encourage smacking each other around. It was how we felt about the preview sample we were able to try out, and it’s how we feel about the final product.


Tall Tales, however, is freaking phenomenal. This is what you could consider to be Grimslingers’ cooperative (or solo) campaign mode. Much of the fundamentals of dueling are present, but instead of taking shots at each other you’re fighting all manner of men with questionable morals and some slightly mythical monsters. The monsters also have questionable morals.

The Grimslingers themselves start out similarly to their dueling counterparts. A neat difference is that gameplay elements such as character levels and an inventory system have been added to the basic setup. So now, instead of simply drawing items in a duel, you can find/trade for/earn gear as you progress. Everyone starts out somewhat the same this time (with the exception of their chosen class), but they’ll be drastically different as they level-up, add more signature spells, and stockpile a bunch of bizarre magical items.

What’s also cool is that there’s an actual honest-to-goodness story here. Tall Tales is broken up into several different chapters, each with several smaller sections and goals of their own. Meeting the criteria to activate one of these sections has players reading some well written and quite enjoyable story bits before being given their next task. Similarly, every time the group visits a landmark on the map (oh yeah, there’s actually a map to explore) there’s a corresponding page in the booklet to flip to with still more snippets of story and world-building, as well as some special actions that players can perform.

One potential problem that was brought up as we played Tall Tales is that having a campaign such as this might discourage repeat playthroughs. Truthfully, there’s not a lot of variation in terms of how the story progresses. You perform a specific task, move on to the next one, etc – none of that is going to change the second time around. However, there will be some variation. How the party decides to travel across the map, what events are drawn from the event deck and when, which random enemy encounters are activated, which modifiers are added to enemies when they’re encountered in the first place, how players decide to build up their character, what difficulty you’re playing on – all of that stuff can lead to some pretty unique situations. Granted, all of that variability ties into the gameplay itself and not the story progression, but it’s still something. One could also argue that the structure of the Tall Tales mode would make creating your own campaign (or using one somebody will inevitably share on BoardGameGeek) pretty simple, and could lead to way more stories and adventures.

Lastly, there’s the combat. As with regular dueling, the rulebook could be a bit clearer when it comes to some of the details as things are a little different when you’re not fighting other players. However, once you get it down it works quite well and is surprisingly clever. Each enemy has their own creature card and a few attack/ability cards. Those attack cards get mixed in with a few more general creature attack cards in order to spice things up a bit, and some story-specific encounters even cleverly splice multiple creature decks together for some added mayhem. Then there are all the variables, such as creature modifiers that can make things easier or more difficult, strength adjustments that are determined by the number of players in the game, and so on. I also like how, because creatures have energy as well as health, it’s possible to wear them out (i.e. reduce their energy to zero) rather than outright kill them. The end results are the same, but it’s a cool touch that works on a thematic level as well as giving players more options to defeat particularly tough foes.


Besting an enemy usually results in everyone gaining a level – potentially unlocking new stuff like a larger hand limit or new signature spells – and often leads to acquiring new items. Sometimes these items are specific to the creatures you kill, too. If I wasn’t already sold on Grimslingers before, I was after trying out a solo campaign and fighting a giant jackalope and then taking one of its antlers to use as a stabbing weapon.

All of this culminates into what feels like one hell of an adventure in an intriguing world full of intriguing characters. Exploring the wastes, improving your character, reading the story bits – it’s all immensely enjoyable. Heck, it can be downright hilarious (in addition to being serious and harrowing) at times. I still start to giggle whenever I remember that first visit to Llama Llama Sip Sip. And there I go again. The last time we were playing as a group it was likened to Eldritch/Arkham Horror, and I don’t disagree with that comparison – although it’s nowhere near as complex as either of those table-hogging monsters.

Admittedly there were some issues with the rules and we needed to turn to YouTube and the designer himself for clarifications, but once it was all figured out Grimslingers was a big hit. The theme doesn’t necessarily come through in the mechanics but what’s conveyed through the story text and the (utterly fantastic) illustrations makes up for that. Dueling other players wasn’t much fun for us, but working together to explore the wasteland and make The Iron Witch proud was captivating. Grimslingers might still be a bit of a pain to track down at the moment, but if any of what you’ve read here interests you even a little bit you’d do well to keep an eye on various board game retailers and Greenbrier’s official site. It’ll absolutely be worth the wait and the effort.