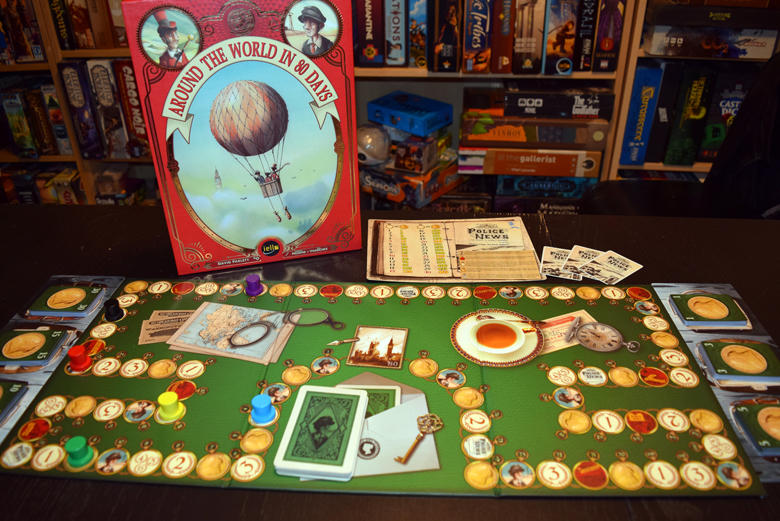 Around the World In 80 Days is a re-implementation of a classic Spiel des Jahres winner.  While it is delivered with great polish and presentation, iello has done a good job of keeping the feel of the original game intact, for better, or, (for us) worse.

I want you to take a good look at the box for iello’s Around the World in 80 Days. Really look at it. Behold the majesty of its slip case design; meant to be reminiscent of the original books. Admire its faux gold-leaf inlay and gorgeous illustrations. This box promises adventure, exciting encounters, a tour of the world itself, and most of all it promises fun. 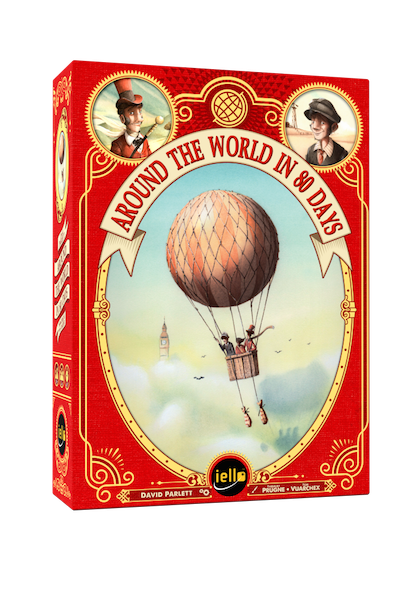 Andrew:  So the question is, does it deliver? Or is it-

Around the World in 80 Days is a 2-6 player racing game based on the book of the same name by Jules Verne. In it, you take on the role of an accused criminal suspected of stealing from Her Majesty’s bank. You flee London with naught but 80£ in your pocket and a handful of rumors sullying your reputation. The goal of the game is to return to London rumor-free and with 10£ or less remaining.  Because being financially destitute is a mark of good standing, or something.

On your turn, if you can, you must move your pawn forwards or backwards onto an unoccupied space. Each space you move forwards costs you £. If you decide to move backwards, you will move back to the closest Layover space and you will get paid according to how many spaces you moved.

There are several space types around the board:  Layover (as explained before), Pound, Bet, Police, and Passepartout. The Pound spaces are simple, you may choose to move normally next turn or sacrifice your movement to gain 10£. You can lose as many turns as you like and watch the pounds roll in…

Andrew:  …And your opponents cruise by.  This is a race, remember.

Bet spaces have numbers on them. If the position of your pawn on the track as compared to the rest of the pawns for next turn equals this number, you win pounds equal to your position × 10 (as in, 3rd place gets 30£, and so on).

Similar to Pound spaces, if you land on a police space, you can lose a turn to gain benefits. This time for a turn you get to drop a rumor card and gain your position x 10 in pounds. 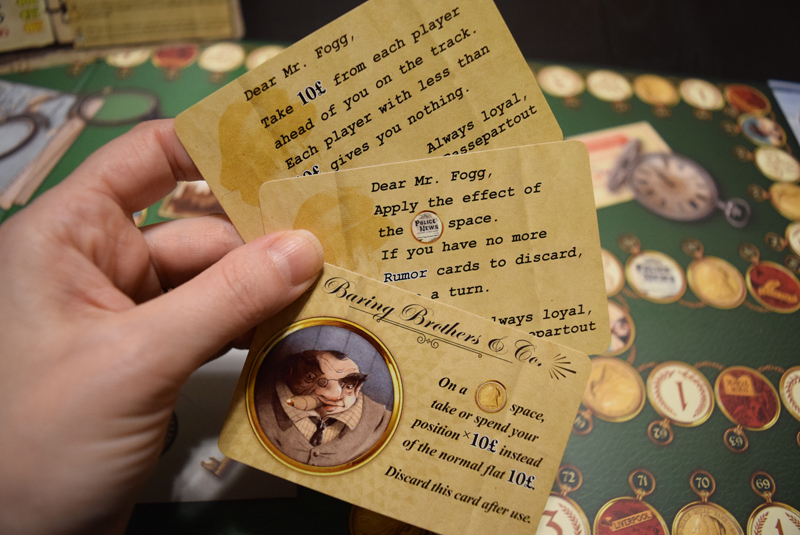 Lastly is the Passepartout space. If you land here and you are in the lead you will draw 1 Passepartout card. If you are not the furthest ahead on the track, draw 2 cards and choose 1; discarding the other. These cards either have events that happen immediately or effects you can play whenever you want.

The game is pretty simple. Move forward as far as you want and can afford or move back to recoup some of your costs. Around the World in 80 Days is a redesign and it feels like one. It has the air of a classic game and relies on the mechanics that made up Hare & Tortise  which won the Spiel des Jahres award in 1979. If this is an award winning game, it should be fun…right?

Jess: I wasn’t having fun.

Andrew:  None of us were, really.

Our first game with four players saw all of us at one time or another mention how we were totally fine not finishing the game. That is not a good sign.

So what went wrong?

There are several thing that i think the game had going against it. Firstly, the game’s theme, of grand, globe-trotting adventure, is totally absent in its play. When we opened it up, we were expecting perhaps a board with exciting locations to visit or perhaps cards with interesting encounters from the book. Instead we got a board that looks like someone’s afternoon tea break at the miniature pocket watch shop. 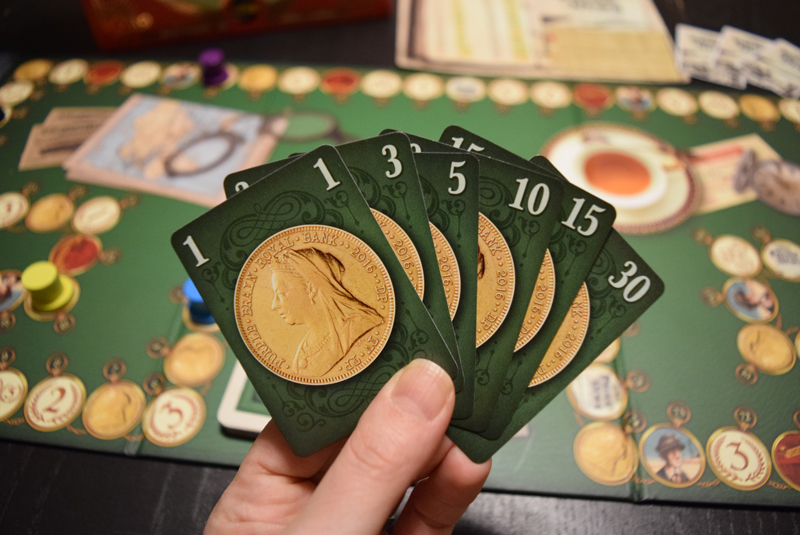 The money, too, is an issue. The game uses cards in a variety of denominations as money. We are not big fans of that around here. I spent so much time trying to sort out my money each turn that I didn’t bother hiding how much I had, so I could lay it all out in piles in front of me.

Andrew:  Same.  Honestly, I wanted to love this one – it always feels strange disliking a classic – but it just didn’t hook me at all.  The gameplay felt like a slog – there was little opportunity for cleverness, little interaction, little strategy…  I was hoping for a huge, varied, exciting event deck to dig through as I traveled across the globe.  What I got instead was an economic puzzle, where the entire challenge came from managing my travel budget better than my fellow travelers.

Jess: For someone who is looking for a classic feeling game, Around the World in 80 Days, should be right up your alley. The play style hearkens back to something I would have played with my parents when I was a child, and the art and presentation are gorgeous. Sadly, for the Gameosity crew, it just didn’t resonate. Perhaps we went in with the wrong expectations, but this one was a miss for us