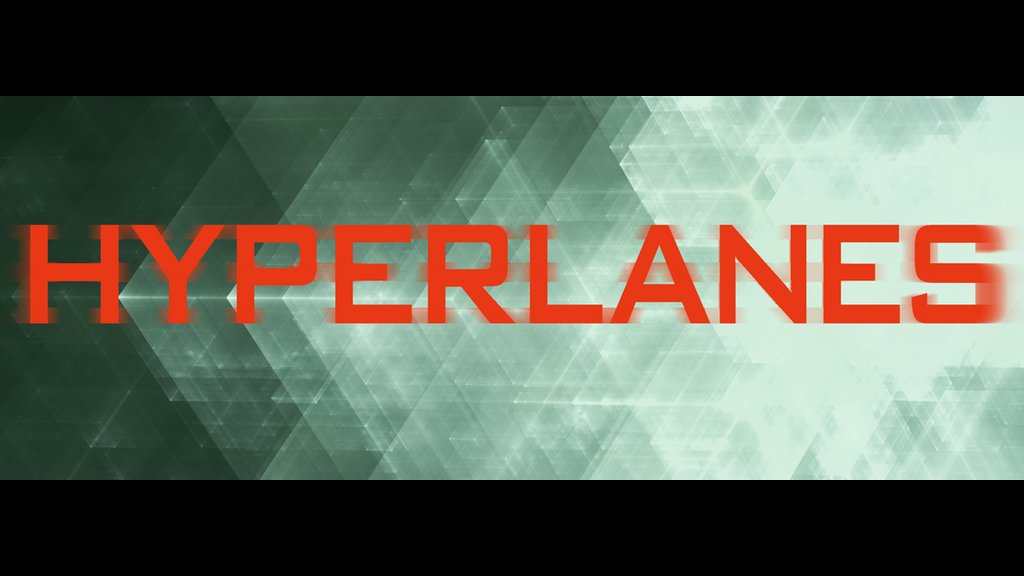 Back in college, I played away entire weekends with my trusty d20 and fistfuls of character sheets. Dungeons & Dragons was my jam, jelly, and compote. I was open to other game themes, especially science fiction, but often times those campaigns never really got off the ground. Was it the systems or the Game Masters? A lot of the systems we tried just felt old and clunky. I haven’t seen much developed for the genre in a while, but Avery Liell-Kok and Ryan Chaddock of Scrivened, are looking to change that. 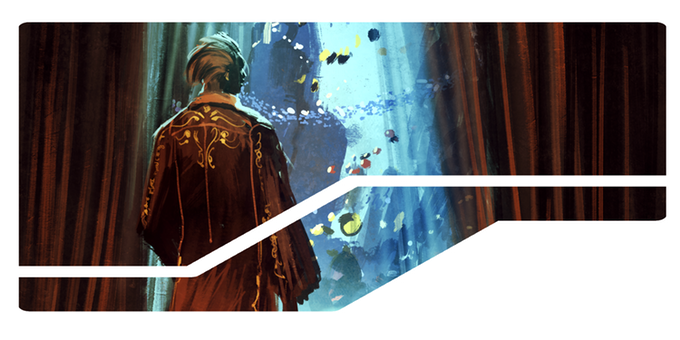 They have designed HYPERLANES, a new scifi rpg based on 5th edition D&D. The game is up on Kickstarter right now and is crushing its’ goals. Avery and Ryan have taken the classic fantasy system and created all new Classes and Archetypes, Feats, systems to build alien races, backgrounds, and even rules for starship battles! The system cites inspirations from Star Wars, Firefly, Cowboy Bebop, and Guardians of the Galaxy; some of my favorite titles in the genre. 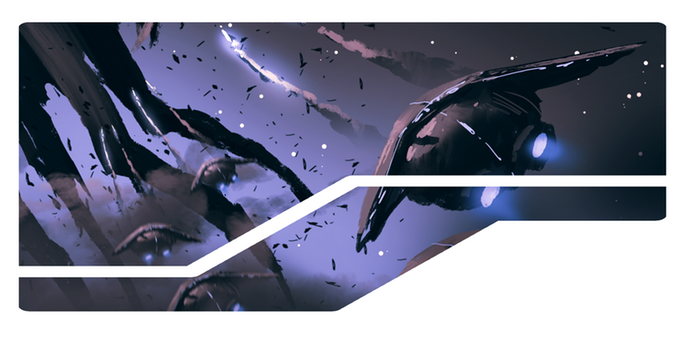 HYPERLANES puts aside magic and instead offers a system called gambits. According to Ryan:

“Gambits are our version of spells. They work almost exactly as spells do in D&D. We use the same tables, so classes get the same number of Gambit slots as they’d get spell slots. Gambits are more focused on the kinds of things that highly skilled heroes (and villains) do in cinematic sci-fi. So, we’ve got a school of Gambits for Survival on hostile worlds and tracking prey; one called Arsenal that enhances weapons; a Tactics school for leading a squad. In some cases we’re just reskinning some existing rules from the D&D rules, such as many of the healing Gambits in the Medicine school.

They work almost identically to spells, with a few changes. They tend to be shorter; designed for easy reading, writing, and memorizing. They rely heavily on technology, rather than spell components. So, for instance a Vehicles school Gambit might require the user to be piloting a craft. An Engineering school Gambit might require access to basic explosive supplies in order to set demolition charges. Depends on the particular Gambit.” 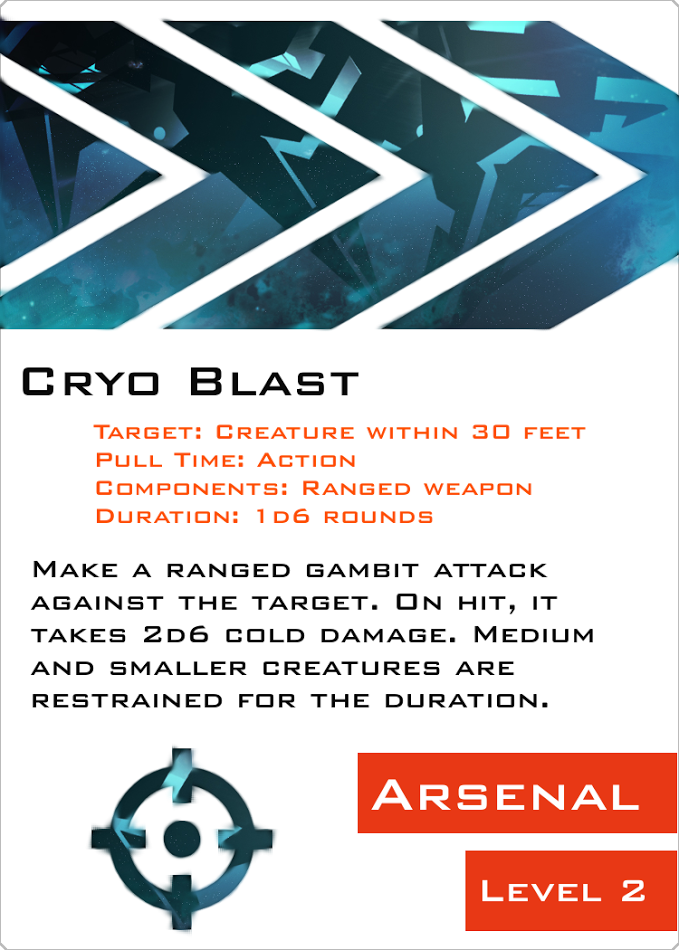 “Some are more open ended than you might see in D&D, so that they work both at the personal and the vehicular scale of combat. So, some of those Arsenal Gambits might enhance any ranged weapon, allowing you to, say, pick your damage type on your personal weapon, as well as with your spacecraft mounted guns.”

Jess: Gambits look like a pretty neat way to make spells technological. I also like the simplification of the rules – it seems like it will speed up turns in combat. One of the things that always make me nervous in modern or scifi games is guns. Ryan let me know that they are working hard to make using guns a smooth experience.
Ryan: “Well, at base they work pretty much the same as ranged weapons in D&D. The main difference is that depending on setting you might change the damage type (heat for laser, cold for cryo, force for gravity, etc.). However as you get into our equivalent of magical items, which we call superscience, you see the more advanced kinds of effects you might expect in truly tricked out weapons. We’re also experimenting with giving mounted weapons their own innate Gambits, so that even those without a lot of specialization in those kinds of abilities will be able to have their moments to shine in a starship dogfight or speeder chase.
We did need to develop rules for two-gun fighting, but we simply adapted the rules from the two-weapon fighting with melee weapons from D&D and made sure the some Outlaws have extra proficiency with that style of combat.
Another thing we’re grappling with are grenades. We’ve got them less as a buyable item, and more as a Gambit that requires explosive, and superscience items found here and there. Still, we think they could ruin the flavor of certain settings, so we’re dealing with them very carefully.” 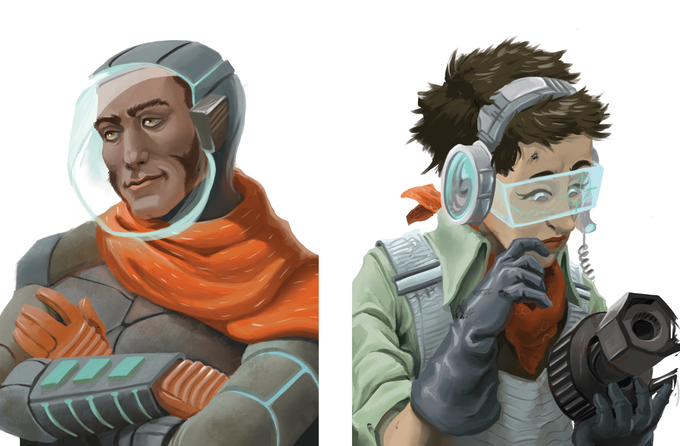 Jess: I’m really excited to see how this game plays. Like I said before, many older scifi RPGs disappointed me, but since I am familiar with the current D&D systems, I am optimistic about HYPERLANES.

For $20 you get PDFs of the core rulebook, character sheet, the gambit deck, any adventures, decks, or additional books that get unlocked, and the players guide; everything you need to run a successful campaign. You can also invest more for hard copies of the game and its components.

There are only a few days left for the campaign so head on over to the HYPERLANES Kickstarter to pledge now.