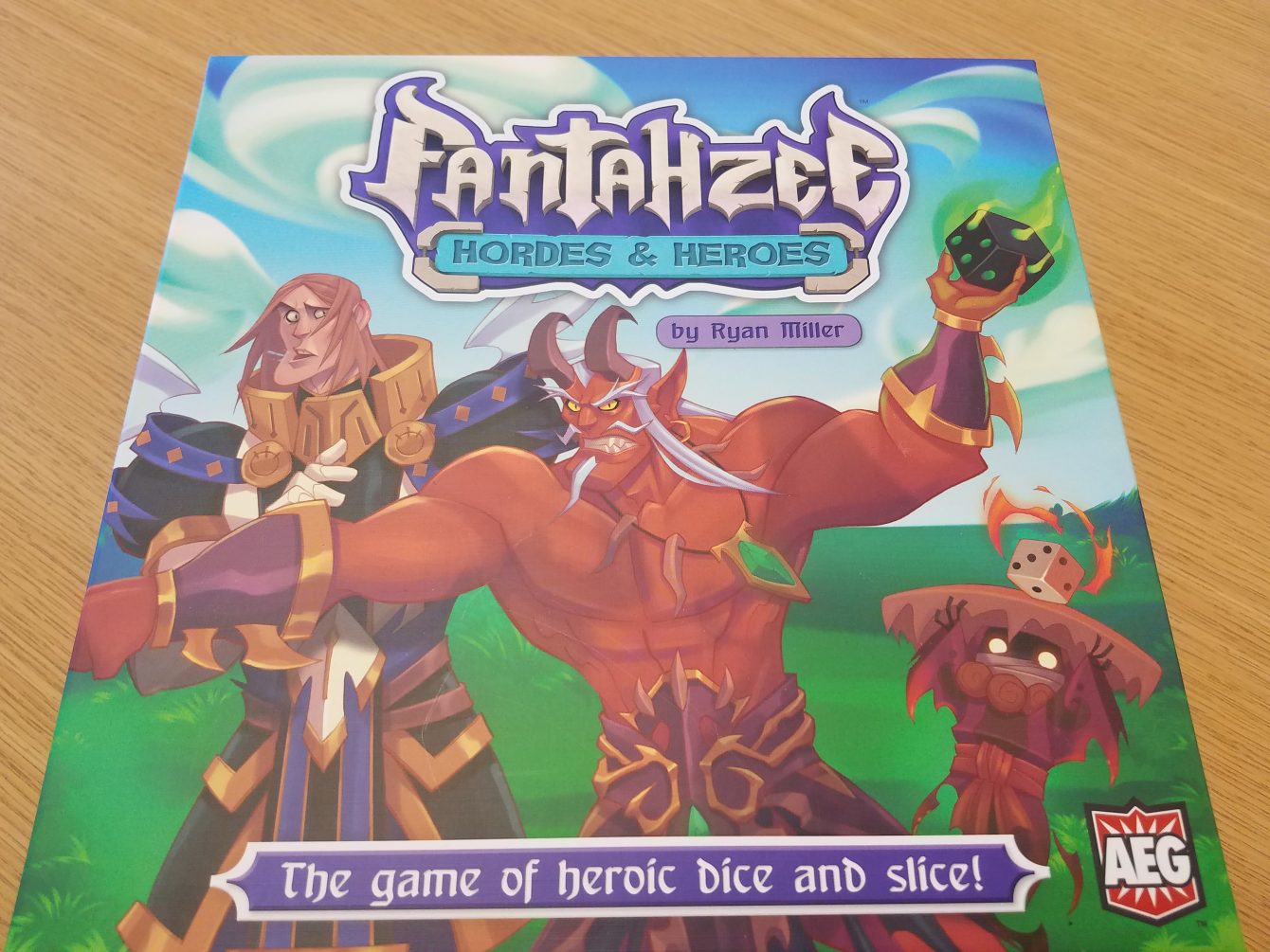 Fantahzee: Hordes & Heroes features great art, simple mechanics which will inevitably be expanded upon, and more luck dependency than you can shake a shamrock at.  If that doesn't bug you, then you're in for a fun, light, dice-chucker.

Dice never cease to amaze me.  From powering interstellar travel to building cities from nothing to defeating hordes of monsters, is there anything the humble handheld chaos-generators can’t do?

Jess:  You do know that it’s not actually the dice that-

Andrew:  Yes, dice are amazing, it’s true.  And in Fantahzee: Hordes & Heroes, they are serving as an odd form of currency, spurring those titular Heroes to face down the, well, Hordes.

Fantahzee (its very name a play on Yahtzee, I think?) is all about building up a party of heroes, rolling some bones in search of matching combinations of faces, and then setting those heroes to the task of defeating the monsters that have come to plague the countryside.

Players will set up 5 stacks of monsters (the Hordes), with powerful bosses on the bottom, dangerous monsters in the middle, and flunkies toward the top.  Each horde only has one face-up card at a time.  Next to the Horde row, the Town deck will get placed – this is the town all you hero-types are defending.

Each player’s turn flows as follows over the course of 4 phases:

Jess:  So, Fantahzee is a luck-fest.  There are moments of strategy, of course, but they are fairly minimal – you draw your heroes at random, roll to activate them at random, get counter-attacked and ambushed at random, and get punished by the Town deck randomly.  That’s a lot of random, even for a dice-chucker.

Andrew:  That’s absolutely all true.  And while I still think the game is a good time, that randomness means that sometimes you’ll have awesome turns full of cool card combos and tons of success slaying monsters, and you’ll also have turns where you do a whole fat lot of nothing, and then get punished because you couldn’t kill the Vanguard.  And there is nothing to do during opponents’ turns but wait, so higher player counts drag pretty badly.

The game continues like this until the group manages to defeat 3 of the 5 bosses.  Once that’s done, players tally up their points from defeated foes, penalties from the Town deck, and determine a winner!

Andrew:  For its flaws, there are moments of real fun to be had in Fantahzee.  Any time you can combo your heroes, generating tons of extra dice or steam to cheaply activate powerful mecha (there are mecha) and smash your way through some monsters feels awesome.

Jess:  Yeah!  Unfortunately, the hollows left between those turns can be really unsatisfying, and at higher player-counts, you have even less control, because the stacks will likely change a lot between your turns.  Not that there is much ‘planning’ here – you activate the best heroes you can, kill whatever you can get your sword into, and hire new heroes before you can even bury the dead ones.

Fantahzee is definitely quite expandable – there is already an expansion in the works and the game box has plenty of room to fit it (before Rob gets upset about it, though, I’ll point out that the box isn’t huge, either).

The components are fine – as I mentioned, the art is great, though I always find it really strange when games feature dice prominently in their mechanics and then proceed to have really plain ivory dice instead of cool custom ones.

Jess:  Your custom dice addiction is well documented, my love.

Andrew:  I don’t even pretend otherwise.  But come on, this is a dice game!  They should have been nicer.

Fantahzee is a game that isn’t going to be for everyone.  It should be a filler game, with its light mechanics, but it drags with more than 3 players and has these frustrating moments when the dice simply don’t cooperate and there is nothing you can do about it (and turns spent doing nothing are pretty antithetical to the ‘filler’ concept, not to mention the ‘fun’ concept).  So pinning its niche is a little challenging.

Still, when it works, it works, and there are definitely moments when Fantahzee: Hordes & Heroes absolutely explodes…but only for that moment.  That said, we’re eager to see where expansions take it, and look forward to reviewing them as they come out.  Not Top 10 material just yet, but certainly not a bad game overall.