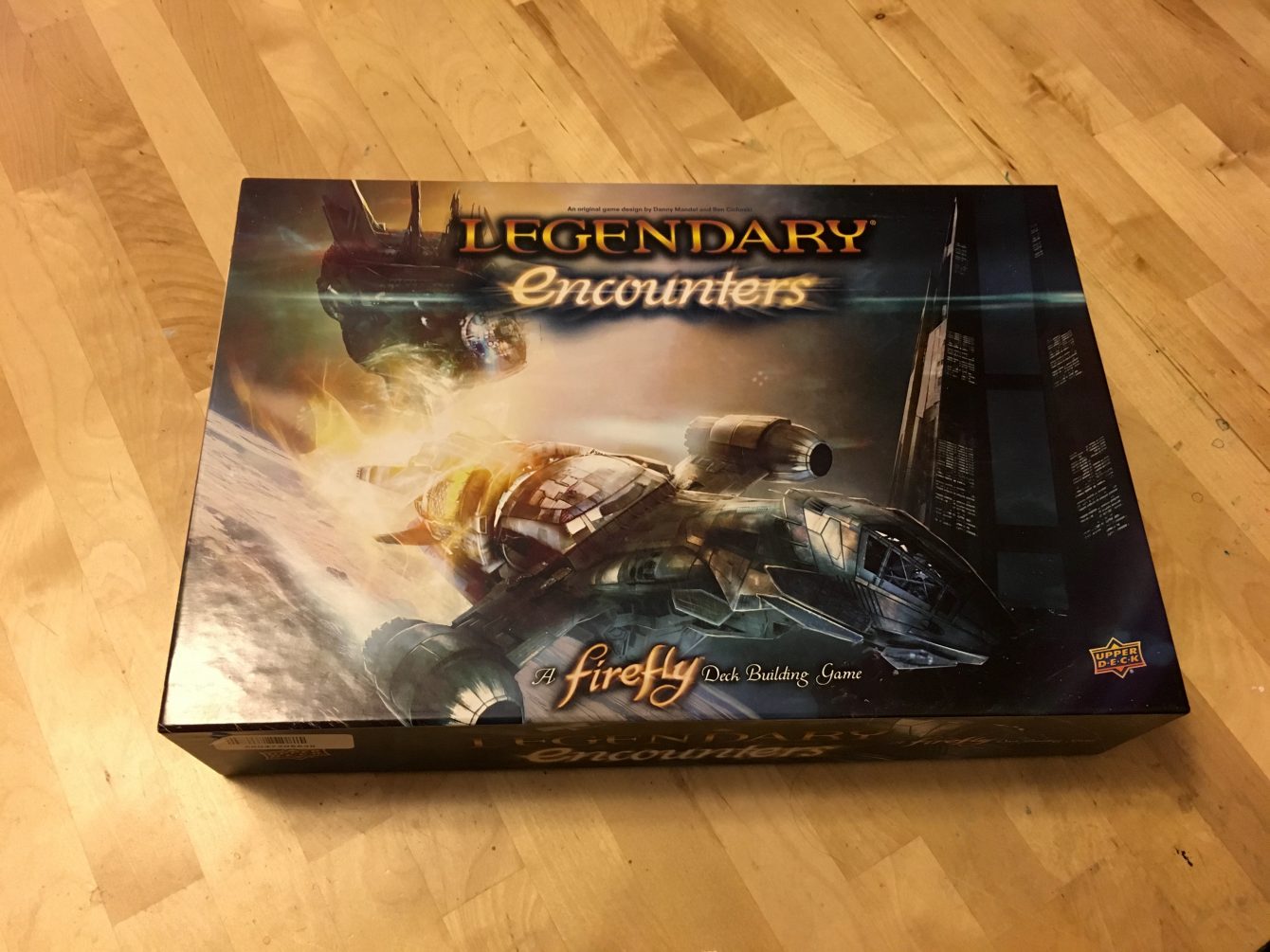 And so it’s come to this. What began as an interesting spin-off of a popular deck building system (Legendary) has become its own kind of popular deck building system (Legendary Encounters) with a few of its own “sequels” and follow-ups. Honestly, I just picked up Legendary Encounters: Alien because I thought the idea of an Alien-themed deck builder sounded neat – I wasn’t expecting to fall in love. But here we are, two years later; we’ve got a Predator version and an expansion that lets you play as the alien queen, all nice additions but none as good as the original Alien game.

And now, another entry in the Legendary Encounters series appears, featuring what is (in)arguably one of the best sci-fi tv shows in existence: Firefly.

Truth be told I was about as in the dark with Legendary Encounters: A Firefly Deck Building Game as I once was with the Alien version. There was some definite curiosity as to how the system would be adapted to fit with drastically different tone of the beloved show, but really I just bought it because I figured it would be funny/neat to have the crew of Serenity fight xenomorphs. I was expecting the same kind of “okay-ness”  we got in Big Trouble in Little China, honestly.

Diana: This game was so fantastic.

Rob: Oh sure, spoil the surprise.

Diana: Don’t care! It was great and everyone should know about it.

Legendary Encounters: Firefly somehow manages to do what I’d thought impossible: it incorporates the Legendary Encounters system in new and interesting ways, and actually feels even more in-line with the theme of its subject matter than the Alien version. The same skeleton of a game is there, so if you’ve played any of the other Legendary Encounters games – or even just Legendary – you’ll already know most the basics. You work with other players to try and complete objectives while also trying to survive an onslaught of enemies and random bad stuffs. You use some cards to “buy” more cards to add to your deck, use other cards to attack enemies, etc.

Rob: There’s so much more to it that that, though, and I’m not sure how best to cover the important bits.

Diana: Why not start with the characters?

Diana: Being familiar with the show has probably colored my thoughts a bit, but I loved how the whole thing is structured around the nine different crew members.

Rob: It makes so much sense, because they’re really what made the show. It’s also really clever how each of them always plays a part in every game, regardless of how many players there are. There’s always five “main characters” and four “supporting characters,” so nobody is left out.

Diana: Having specific events or enemies with special actions that will come into play if specific characters are “main” is also really neat and goes a long way to merging theme and mechanics. Getting rid of permanent player elimination was also a brilliant move.

Rob: Oh I know! It was always kind of a shame when we’d lose someone in the Alien version and either have to end the game entirely or that person would just have to sit out. The way they handle it here is so much better. Now if someone gets incapacitated they’re still unable to act, but other players can heal them and drag them back into the game.

Diana: It’s like, I know it’s a simple adjustment but it makes me picture one of those moments in the show where someone gets hurt and the rest of the crew patches them up. It fits the theme, and it fits the trope of main characters in TV shows almost never dying.

Rob: It’s such a smart way of adapting the Legendary Encounters system to fit the show. Really, the only issue I could see cropping up – not that it’s been an issue yet but it could be down the line – is that the character-specific stuff might lead to players feeling forced into using specific main characters when playing certain episodes.

The use of main and supporting characters goes further than a few special actions, though. Main characters are considered “in play,” and are subject to certain positive and negative effects depending on which cards end up on the table. However, the remaining four support characters all have their own cards shuffled into one deck that you then get to acquire cards from in the future. So for example, if you choose Mal and Zoe as main characters you’ll be able to use them for special events but neither of their unique cards will be available to add to your own deck. It’s a really smart trade-off.

Unlike previous Legendary Encounters games, here there are general use Talent and Flaw cards instead of avatar-specific ones. The great thing about this approach is that it’s possible to have multiple Talent (or Flaw) cards in your deck, which will potentially allow you you activate your main character’s special ability more often. Conversely, giving characters flaws is also clever (albeit problematic) because it also ends up making additional draws from your deck more risky. And of course, talents and flaws do a good job of fitting their given character.

Rob: Splitting things up by blocks of three episodes, instead of by individual films as with previous games, was also smart. Although it’s not like they could have spread each scenario out over several non-existent films anyway.

Diana: It makes a lot of sense. It’s also cool how, by breaking a single game up into three sections, players get a couple of “intermission” type moments where they can collect themselves, heal up, repair Serenity, and so on.

Rob: Oh my god and how great is it that Serenity is sort of her own character in this? I mean she’s not going to be doing any fighting or anything like that, but I like how she has a presence and could end up getting destroyed – thus killing everyone.

Diana: Also the upgrades. I love how you can use the credits you earn from certain objectives to give everyone various benefits. I also like that there are credits to earn and spend in the first place.

Rob: You know, I never thought it was possible but this has taken the top spot as my favorite deck builder. I mean a lot of the card artwork is kind of… not good… but at least the box, mat, and avatars look nice. And the game is fun enough that I don’t really mind the iffy illustrations.

Diana: It’s my new favorite, too. Even though we lost our last game on the second episode I immediately started looking forward to when we could play again. It’s just as much fun as the other game, but I like some of the tweaks to this one a bit better and now that I’ve seen Firefly I also love the stories that we get to play through.

Fans of deck builders who are also fans of Firefly shouldn’t hesitate to give Legendary Encounters: Firefly a try. The minor tweaks to the Legendary Encounters formula go a long way here. Knowledge of the show isn’t a must, though; even if you have no idea who Shepard Book is or have never heard the show’s theme song, there’s an excellent cooperative deck builder here.

And heck, maybe playing the game with get you interested in checking out the show. Which you should totally do, by the way.