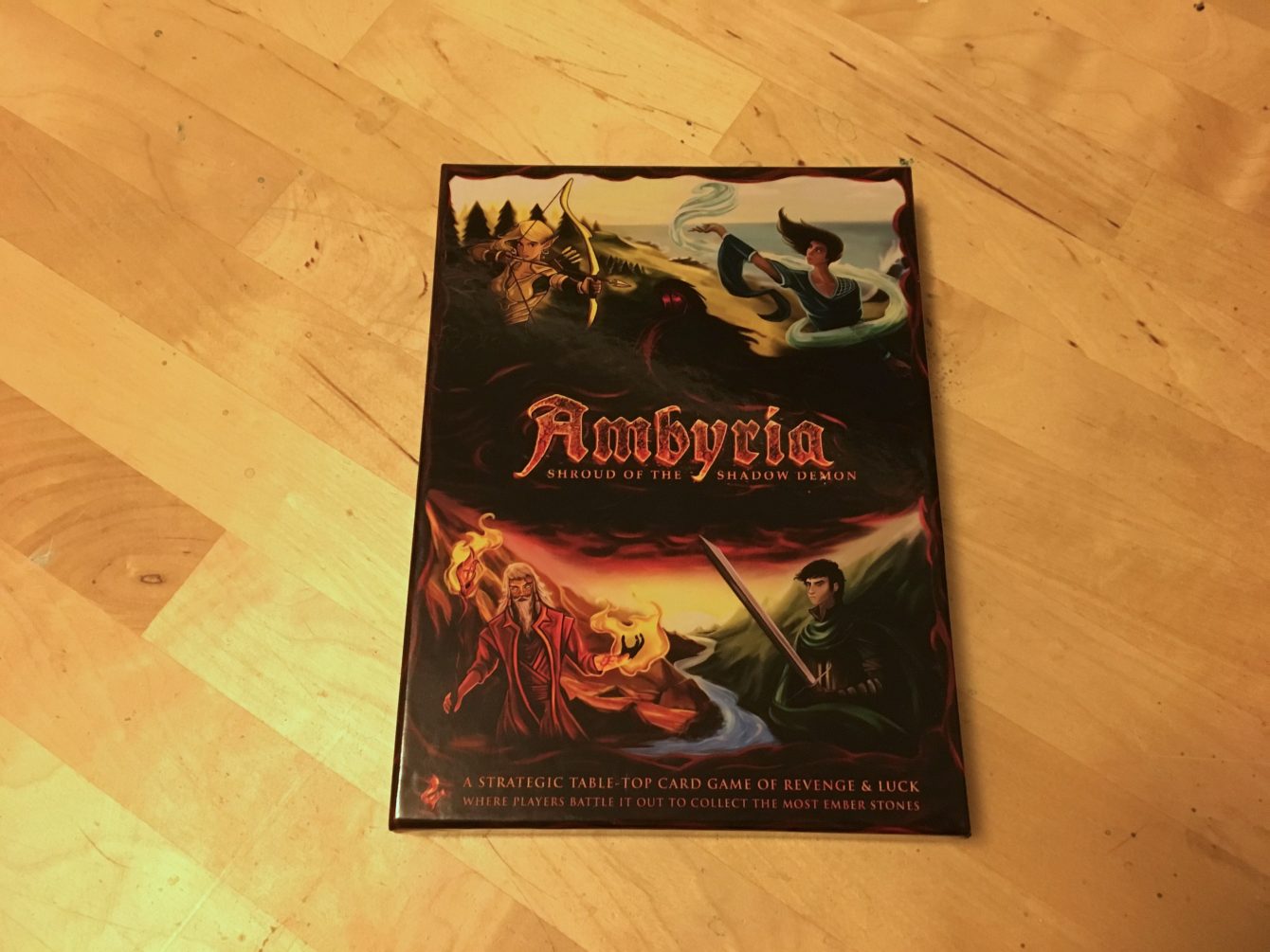 Ambyria: Shroud of the Shadow Demon may not sound or look like much in the box, but it's actually a pretty solid Take That style game, with some really clever, tense mechanisms to elevate it past its generic fantasy trappings.

Ambyria: Shroud of the Shadow Demon. Sounds like the name of someone’s high school Lord of the Rings-inspired fanfic, doesn’t it? You’d be forgiven for taking one look at the box and/or name, shrugging your shoulders, and moving on. Truth be told if I hadn’t been assigned to review it, I would have skipped it, too. However, if you’re able to look past the Generic Fantasy Everything of the game’s theme, it just might surprise you with its gameplay.

Diana: “Shroud of the Shadow Demon?” Are you serious with this?

Rob: I’m afraid so. But hey, names aren’t everything. Even something that’s eye-rollingly generic could surprise you – I say as though I don’t already know what both of our thoughts are on this game.

Credit where credit is due, though, Ambyria has been something of a surprise. Despite what you might think after hearing the name, there’s actually a rather interesting “take that” style card game going on beneath the lid. One could argue that it doesn’t make much sense for a bunch of heroes to compete with each other for the chance to vanquish the looming villain when they could just work together, but it’s probably better not to think about the theme or the background story too much.

There are a total of four decks in Ambyria – one for each of four possible heroes.  Unlike a collectible card game with endless time-and-cash- devouring expansions, the way everything is self-contained is the first thing that piqued my interest, honestly. I can appreciate a game that’s designed around tight constraints like this. I can also appreciate a game that doesn’t require an absurd amount of time to set up or put away. Anyway, all you need in order to start playing is for at least two players to each pick a character deck.

Ambyria does another thing that we like: it uses cards for more than one function. This is a fairly simple mechanic, conceptually, but I have a soft spot for games that make me agonize over whether or not I want to use a card in one particular way or “sacrifice” it to use it in a different way. In Ambyria’s case, it’s a choice between changing your “mode” and simply playing the card as usual.

The 4 Modes are mechanically simple, but add interesting tactical options. Each one will give players a specific boon that can be advantageous or completely pointless, depending on the situation. Think of it as a sort of simple role selection mechanic except everyone can decide to do the same thing – if they have the appropriate cards in their hand, of course.  And cards which you use to change Modes are not going to be played for their regular effect, so it’s a constant cost/benefit analysis, which we love.

Rob:  So yeah, modes and switching between them actually ends up being quite strategic.

Diana: Did we ever end up taking advantage of Hasty mode, though? I mean I think I remember you using it once or twice in our plays, but did you ever actually benefit from it?

Rob: I don’t think so, no. I never saw the point in it when there were far more obvious benefits from the other three modes.

Diana: Maybe it’s something that would make more sense with more players. I imagine things get a bit more chaotic when it isn’t just one-on-one.

Rob: That’s entirely possible. It could also be something that would make more sense once you start to become familiar with different strategies.

The most interesting element to Ambyria, however, is the Emberscape. The Emberscape is where most played cards end up, and it usually holds a maximum of five cards.  In most cases, playing a card will add it to your Emberscape. Ongoing effects will continue to activate on subsequent turns, but any one-offs (which most cards are) simply sit there.

However, if your turn begins with a full five card Emberscape (or three cards in Hasty, or as soon as it’s full if you’re in Attack mode), you add all of the cards to your Collection. And the reason this is important is because all the cards you play will have a point value (called Emberstones), with those points only counting if they’re in your collection.

And in Ambyria, Emberstones are what it’s all about – the winner is the hero with the most Emberstones in their Collection at the end of the game.

This means that you have to gamble with the cards you add to your Emberscape a bit. It’s likely that an opponent could remove or even steal cards from you as the game progresses, and you can’t collect anything until you have five cards out (or three if you’re in Hasty mode). In practice it can make the game surprisingly intense as you play a high value card, use its effects, and then hope you can bank it before anything happens to it.

Rob: The way you have to plan around the cards you play, both because of their effects and because of how you need to collect them for points later, is probably my favorite thing in Ambyria.

Diana: It’s definitely an interesting mechanic. I was also surprised at how it’s a Take That game but we didn’t hate it. I guess it’s because there are so many ways to sort of mitigate potential damage?

Rob: I think that’s definitely part of it. Between the mode switching and how you can usually even things out right after you’ve been “got,” it’s a more balanced sort of Take That. At least with two players. I think it would be even more interesting with three or more.

Diana: I’d worry a bit about ganging up with more than two people, though. If everyone decides you’re too close to ending the game or winning, you could end up having to wait two or even three turns before you could try to fix any of the damage.

Rob: I could definitely see that being a problem, but I think having the Collection face-down might help. Unless someone’s good at counting cards, I don’t think anybody would know who’s in the lead with any certainty. And even then there were plenty of times in our game where we were both able to add cards directly into our Collection without ever revealing them.

We’re still not huge on Take That games, and as such probably won’t be playing Ambyria with any sort of regularity, but there’s no denying that there’s a surprisingly enjoyable (and enjoyably self-contained) card game here. We can absolutely respect what it’s accomplished, but we’re not really the target audience.

I do think that players who prefer competition over cooperation shouldn’t write it off, though. It’s a pretty solid case for not judging based on appearances, and a good game to boot.

You can order Ambyria: Shroud of the Shadow Demon directly from Paw-Warrior Games, and be on the lookout for their upcoming Kickstarter for its first expansion!