Designed to simulate the thrilling…thrills of a breakneck race, TUR has a unique spacial element to its gameplay – the ‘board’ is actually a random splay of obstacle cards on the table with the entirely traditional checkered flag at the far end.  Racers line up and then blitz toward the finish, doing so by drafting Path cards, which dictate their car’s progress.

Going slow and steady is an option, of course; if you only draw a single Path card on your turn, you have lots of control over where you end up (and dictate who moves first next round).  However, the key to victory is drawing two or even three Path cards at a time, with the limitation that you can only draw adjacent path cards from the offer, limiting your choices and adding some delightful chaos (when you draw three, you have to actually shuffle them and lay them out randomly ahead of you).

And of course, there is the devastating Nitro – a once-per-game event where a player draws all six path cards, shuffles them blindly, and adds as many as they want, one at a time, to their route.

Andrew:  I have to say, this one wasn’t my thing.  I really appreciated what it was trying to do, especially since you can hit boosts to move faster or reverse to try and get out of crashes, but in the end, a driving game that makes you feel like controlling your car is the challenge just isn’t my idea of fun.

Jess:  I liked it more than you did, I think.  The physical, spacial element is a neat idea, and the path drafting is a clever mechanism.

Jess:  Well, somebody can’t seem to finish a game without hitting the Nitro.

Andrew:  I like going fast when I race!  Is that too much to ask!?!

A standalone expansion for Avignon, PIL continues in the original’s footsteps – it’s a 2-player Area Control…ish game where players compete to draw characters to their court.  A simple setup sees 5 characters arrayed between you and your opponent, and each turn you will take 2 actions (which must be different):

As in Avignon, the winner of PIL is the player who manages to claim 3 followers before their opponent manages the same, or who meets some of the unique victory conditions available on the characters.  And in an awesome bit of design, characters from both games can be combined to greatly expand on the gameplay of either.

Jess:  Like the original Avignon, Pilgrimage is a really great, simple game.  Each character’s unique power lead to some clever strategy, especially the alternate victory conditions presented by the Nobles.

Andrew:  I actually really enjoy Avignon, and Pilgrimage expands on it in every way.  Its new characters actually turn the originals into factions, so that powers new and old interact with each other seamlessly.  The balance between the two is tight and the combination makes for an even better experience.

If you’re looking for an ultra-portable, quick 2-player game, you really need to check out both Avignon and Pilgrimage!

A card drafting game about seating people at a party, FIND has simple set-collection at its heart, but with some clever twists along the way.  Each game starts with everyone holding a hand of stereotypes, all of whom have a few attributes (age, gender, conversation topics) which will score them points depending on who is adjacent to them.  Players claim a card and pass the rest, trying to plan for the best scoring opportunities once everyone takes their seats.

Of course, each character also has some special attributes, too, which can vary from preferences in neighbors to adding bonus points of specific guests are or aren’t present to even scaring off other guests from the party. 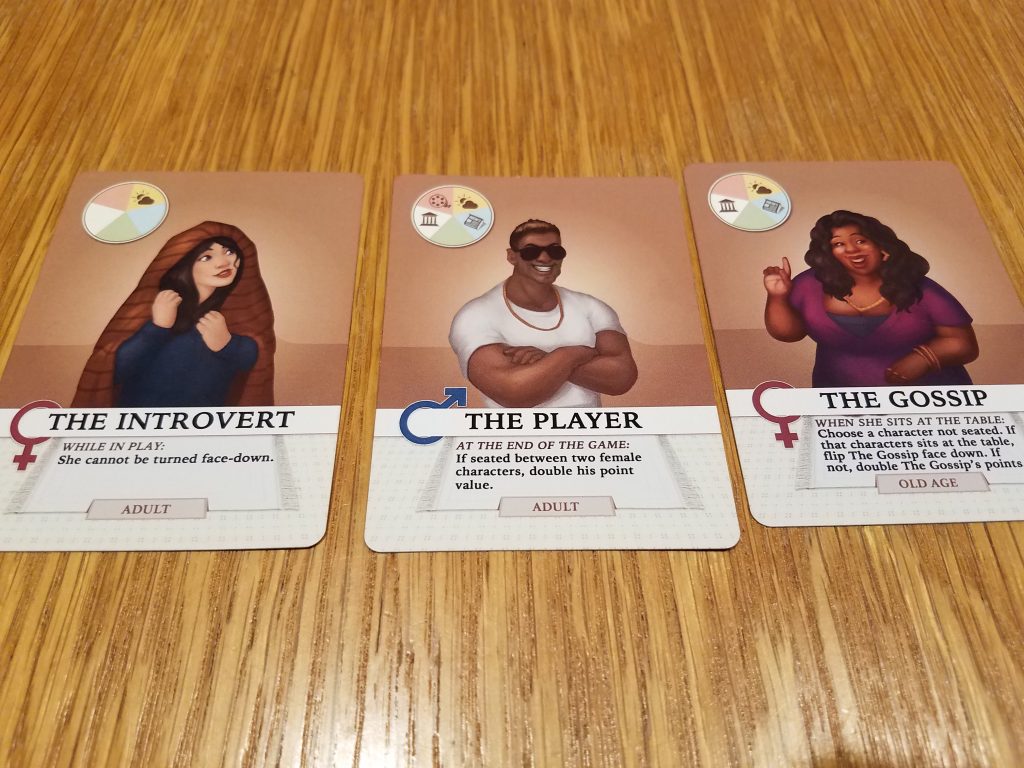 Andrew:  For example, this dudebro wants to be between two ladies.  And for optimal points, those ladies should be the same age and have as many conversation topics in common as possible.

Complicating matters, and in our favorite bit of this simple game’s design, is the fact that you will be adding 3 characters to the party, but so will your opponents.  And the characters on the left and right that you add are considered adjacent to the characters that your neighboring player adds to the sides of their seating arrangements!

Andrew:  That limitation on being able to plan is my favorite part.  It adds strategy to your drafting and the order in which you add your guests – play it wrong and you’ll accidentally hand your opponents lots of points.  It’s clever and simple, though many groups will want to move on to denser drafting fair pretty quickly, I think.

Jess:  I thought this one was fun, but it has a pretty wonky player count; 3-4 is more narrow than we usually like it, and it’s a shame that there isn’t a 2-player option.

Andrew:  That’s what Avignon is for!

Buttonshy’s Kickstarter has one week left to go, and it has blown away its funding goal and is on to stretch goals, adding cards to all 3 games for expanded gameplay.

If ultra-portable games with widely varied themes at really affordable prices sounds like your kinda thing, head on over to the Kickstarter and check them out!

(Gameosity received preview copies of these games.  We were not otherwise compensated)