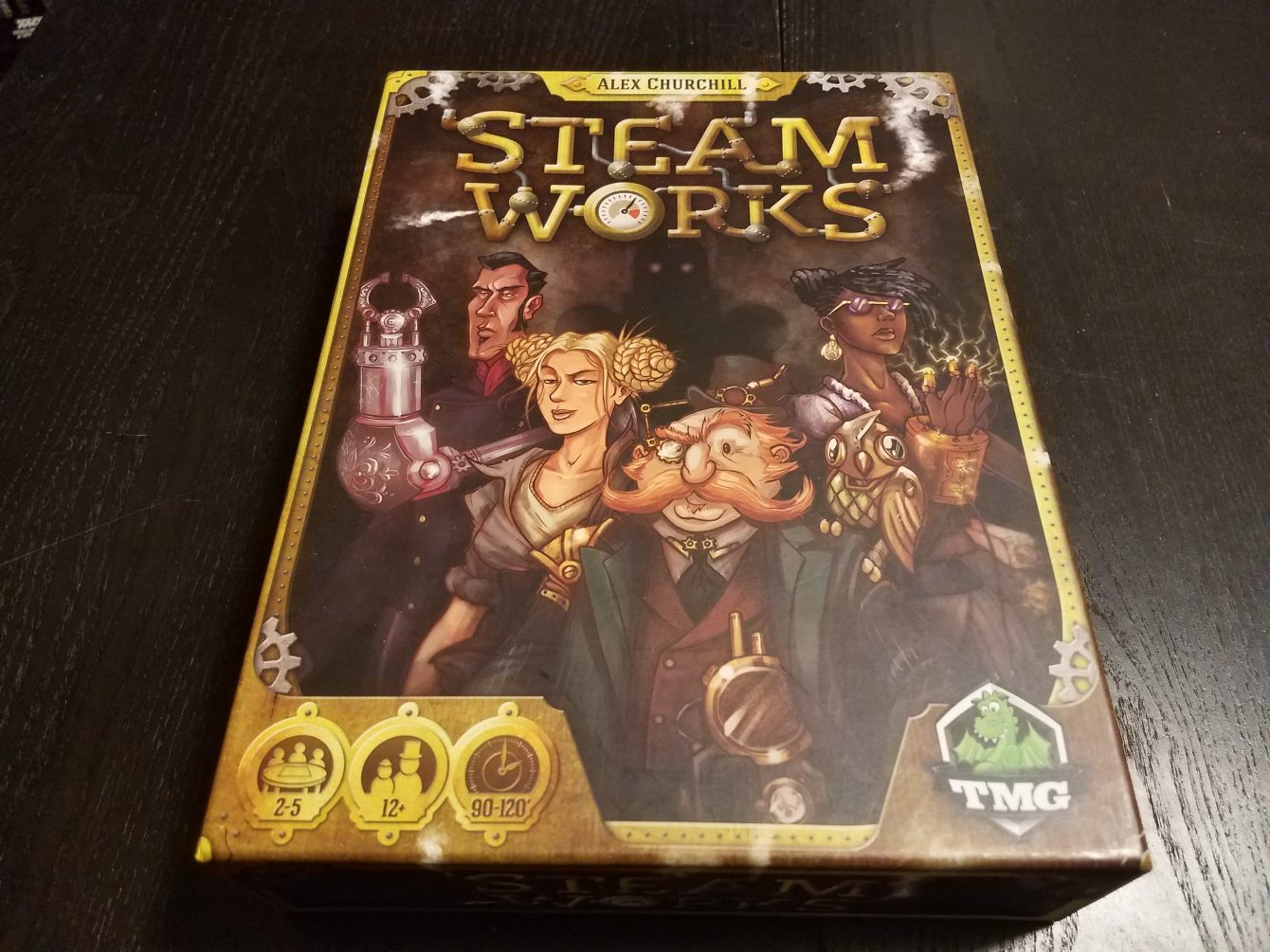 Steam Works has a few innovative mechanics, with players literally building the spots where they can send their workers, but a slow start and a complex finish can drag it down a bit.

‘Worker Placement’ is a broad genre.  Born of the indirect competition native to Euro-style games, its mechanical core, like so many other classical modes of gameplay, has enjoyed reinvention and rejuvenation in this rising moment in the popularity of board games.  Released in 2015 by Tasty Minstrel Games, Steam Works riffs on the classic ‘send your workers to get resources and points’ formula by centering the game on the mechanic of creating the placement locations themselves, as each player cobbles together steampunk mechanisms of increasing complexity, all the better to impress the queen and claim victory!

Josh:  So right up front, I find the idea fascinating.  Worker Placement games so often come down to optimal placements, so that you can have the resources you need to follow your point-generation strategy.  Not so easy here.

Andrew:  Yeah, for sure.  The core concept is the same, of course – the inventions both are and generate VPs, acting both as the goal and the mechanism for achieving your goals.  But before we dive too deep into our musings, let’s get the necessary mechanical exposition out of the way.

In Steam Works, all players take on the roles of inventors.  Each inventor has an A side and a B side, with the former being identical and the latter giving variety in abilities (once you have played a time or two with the basic, you will assuredly want to move on to the variable player powers).

The setup itself is meant to evoke a great clockwork – machine parts ride in on conveyors, separated into increasingly powerful and complex Ages.  These raw components each have unique functions, and by cobbling them together will we create the actual spaces to which we can send our workers.  These pieces represent a variety of functions, each of which either generates resources (in the form of component tiles), money, victory points, and a host of other effects, all of which are likely beneficial to an aspiring machinist.

Each component is powered by one (or possibly more) type of ‘source’; sources form the heart of each invention, acting as both power supply and trigger.  The three sources in Steam Works are Clockwork, Steam, and Electrickal (which, I assume, is a positively Victorian spelling of Electrical).

By procuring source and component tiles, players can assemble Devices.  Once built, these Devices become placement spaces for future workers – it only takes a single worker to activate a Device, and the player who does so benefits from all the attached components!  By building powerful Devices, players can accomplish a huge amount with the relatively few workers they have at their disposal.

The size (and therefore complexity) of these engines of productivity is limited – any inventor can hammer together a size 2 Device (a source and a single component), but in order to build larger and more delightfully complex machines, you will need to, no surprise, build Devices which allow you to build larger Devices.

Andrew:  And here’s where things get a little wonky for me and Steam Works.  See, if you somehow don’t manage to build a Device that will let you upgrade existing Devices or build new ones larger than size 2, your personal ability to create truly awesome inventions is non-existent.

Josh:  True!  However, you can always count on an opponent to do that for you, if you’re willing to take that risk.

Indeed, any player can send their workers to any Device that isn’t currently in use – not just their own.  Of course, ownership has its perks; any time another player uses your device, you will gain a victory point.

Andrew:  Which can be a poor balm when they start spamming your delicately designed machines to their own nefarious end!  Those hornswagglers!

Josh:  So, you’re kinda getting into the spirit of the game, I take it?

Steam Works is a percussively short game in some ways – there is an absolute turn limit, with device components falling off the conveyor into the abyss each turn.  When each Age stack is exhausted, the next will activate, and once the third Age is gone, the game is over.

Andrew:  So, I liked Steam Works quite a bit; I’d say the game’s got a lot of really neat things going for it.

Andrew:  But I found the pacing really killed it for me.

Josh:  I know what you mean.  When the game starts, your options for taking turns are limited – there are no inventions out, and every move is about gathering the resources you will need to make the Devices which make future turns worthwhile.  It has kind of a slow start.

Andrew:  And, unfortunately, with every invention that does make it out, each subsequent turn takes slightly longer – essentially, with each new space to place a worker that is added, the turn-by-turn calculation of efficient worker usage becomes more and more complex.  So by the end of the game, when each player has a handful of Devices in front of them (and can deploy workers to any player’s devices, remember), turns start to really drag while everyone looks at everything to figure their optimal placement.  It has kind of a slow finish.

Josh:  And yet, I felt like it was over all at once.  Each tile you take hastens the end of the game, and even on turns that no one took a tile, they get tossed off the conveyor anyway.  Just as the really big toys hit the table, the game is over.

Steam Works is an attractive game; thematic art, good quality components, and lots of nice bits.  Tasty Minstrel delivers good components as always, though, to be fair, the rulebook was a bit of a fiasco – there are a couple of components in the game which were simply omitted from the rules; doubly unforgivable, given the icon-driven nature of the components.

These criticisms aside, there is plenty to recommend in Alex Churchill’s first offering to the board game world, and we’re very eager to see more from him.

Andrew:  That said, I don’t think this one’s for me, which breaks my cold mechanical heart because I so wanted to love it.

Josh:  The pacing really did it in for you, eh?

Andrew:  Yeah, and that really kills me.  The idea of tweaking the WP formula this way is actually brilliant.  When it works, it feels fantastic – you send a single worker to a machine that activates your Steam Golem (because those are a thing), generates some cash, snags you a free component, builds you a new Device, and grinds out a few VPs for you all at once.  It’s awesome!

Josh:  But I can understand how that may not be enough to carry you through long rounds spent analyzing every Device every player has invented, trying to figure out how to best use your very limited number of turns.  I liked it a whole lot, too, but the things you bring up are definitely issues to be wary of.

If you can forgive its faults, and especially if you avoid it at higher player counts, SW is actually a smart game with lots of potential.  Sure, we’re split on it, as recommendations go, but none of us feel it’s a bad game, and for some, it’s going to be a real hit.

(Gameosity received a review copy of this game.  We were not otherwise compensated)