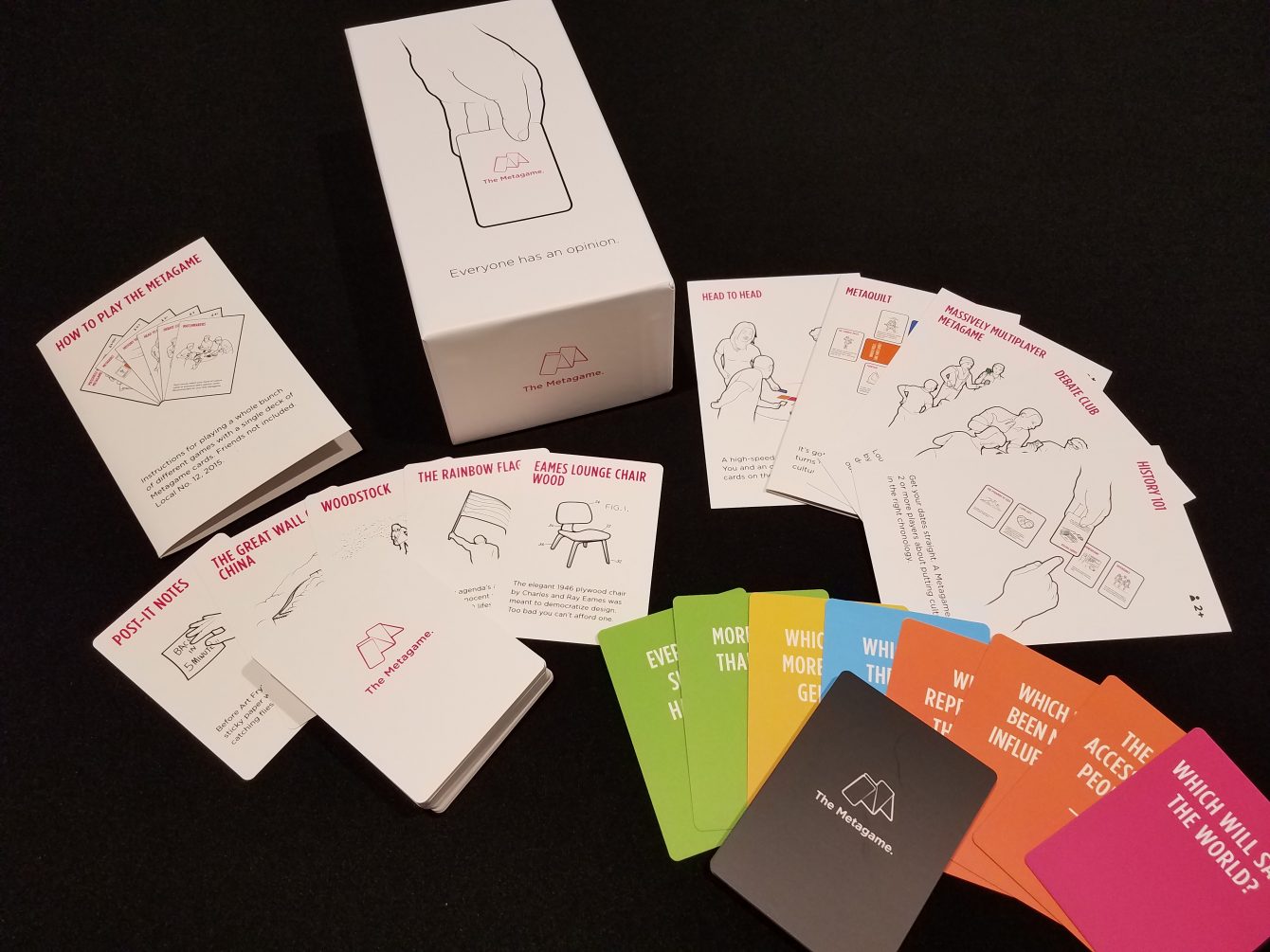 The Metagame is just one more in a huge line of party games made of cards with things and cards with questions about things.  But with some clever gameplay options (along with some less-inspired ones) and without needing to resort to constant references to genitals and drugs, it's definitely a fun alternative to your exhausted pile of Cards Against Humanity expansions.

When the bombastic shock humor of Cards Against Humanity got huge, it spawned ::checks boardgamegeek.com:: eight trillion copycats.  Everyone suddenly thought they could re-bottle the lightning that the CAH team had apparently unleashed. This was not the case.

Party games promising dubious social interactions and a lack of political correctness sprang up like wildfire on Kickstarter, clogging the arteries of casual gamers with dual-colored cards and Lego-style humor – you know the kind: random questions and arbitrary answers stacked on top of each other into something that resembles but is not actually itself ‘comedy’.

From that churning primordia, many really terrible games have been born, all proudly having 2 kinds of cards, some asking questions, others proposing answers, and all purporting to be entertaining.  When we saw The Metagame from Local No. 12, despite our immediate attraction to the graphical presentation of the game, we couldn’t help but wonder if it was just more of the same, or if Colleen Macklin, John Sharp, and Eric Zimmerman had managed to break the seemingly endless cycle these games established.

Andrew:  Now, I can’t say definitively whether the folks at Local No. 12 were actually inspired by CAH and its ilk, but The Metagame’s DNA speaks for itself – the games are cousins.

Jess:  Yeah, but it’s not the same game.  I mean, unless you really want it to be.

The Metagame is a game in binary, featuring two types of cards.  One is the pile of Culture cards, representing all sorts of ‘stuff’:  The Muppet Movie, Wonder Woman, Nirvana’s Smells Like Teen Spirit, the NYC Subways System.  You know, stuff.

The other kinds of cards are the Opinion cards; these invitations to debate, argue, opine, or otherwise disagree cover a variety of topics, like: Which Is More Fabulous?, Which Would Save The World, or simply Squishy.

Jess:  And here’s where The Metagame gets interesting.  From these components, Local No. 12 has created 6 ways of playing, all intended to be modular and easily modifiable.

Whereas CAH can be tinkered around with to a certain degree, The Metagame leans even more into the Lego-like nature of its design.  Some of these play modes are stock-simple, while others are pretty damn inspired.  So in order to really review The Metagame, we need to look at the 6 games that come in the box.  We’ll try to make it quick, and in no particular order.  Ready? GO!

Andrew:  Matchmakers is actually a really fun riff on the CAH formula and, to me, better in every way.  It’s quick, active, and it forces you to use basically all your Culture cards every turn.  The fast turnover and funny combinations of Opinion and Culture cards makes for a really easy good time.

Jess:  One of the things about these style games is that they tend not to play well at lower player counts.  Though the whole ‘race’ element feels tacked on, Head to Head actually makes The Metagame work at the 3-player mark pretty well, so that’s cool.

Andrew:  Meh, boring.  Some of the Culture cards don’t have dates (the game’s instructions say simply skip those), and aside from the comedic value of being tremendously wrong about my dates, there isn’t much entertainment value here.  A curiosity at best.

Debate Club:  For 5 or more players.  One player starts at the critic, and the rest are the debaters.  Each round starts as the critic reads an Opinion card, and one by one players reveal and defend the Culture card from their hand they think is the best response.  The critic eliminates the worst answer (this player stays in as a critic for the rest of the game) and the game continues.  The winner is the player who survives each round of debates.

Jess:  This one is reeeeally dependent on your group.  The debates can be fun, but it sorta sucks picking a loser, rather than a winner.

Andrew:  Agree.  Technically you do pick a winner, but that player just gets to draw an extra card at the beginning of the next round.  While I actually really like that this mode encourages creative debate, a game built around arguing with people can turn south pretty fast if you play with lousy playmates.  But that’s not The Metagame’s fault – find better friends.

Massively Multiplayer Metagame:  For 5 to (allegedly) 50 players.  Each player gets 2 Opinion and 4 Culture cards.  At any time, they can say “DEBATE THIS!” (capitalization as per the instructions), reveal an Opinion card, and instigate a debate.  The first two players to respond with Culture cards have a minute to defend the validity of their card, and a popular vote is held, with ties broken by the instigator.  The winner takes the loser’s Culture card, and the person who ends the event with the most cards wins.

Jess:  So, this one is clearly better with more players, because otherwise you can just use METAS other gameplay modes.  It’s fast-playing Debate Club on steroids.

Andrew:  We haven’t actually tried this one because it sounds a bit unwieldy at best, but the instructional card swears that Local No. 12 have actually played this game with “thousands of players” and that it really works – each box of META supports 50, so you can theoretically just add more to, you know, add more.

Metaquilt:  Here’s the winner in our book.  For 3-7, Metaquilt has players taking turns laying Culture and Opinion cards from their hand into an expanding shared tableau.  But the great thing is that each card which gets added has to somehow be thematically connected to all the other cards it touches.  If players want, they can challenge a card’s placement, forcing the placer to defend their reasoning (but they can only do so if they think they have a card that fits a particular space better, which they will also need to justify).  For every card your placed card touches, you get to discard a card from your hand.  The player who empties their hand first wins.

Andrew:  The reason I like Metaquilt so much is that it encourages the best part of any of these party/card games, which is coming up with goofy justifications for cards to make sense together.  Technically, you only need to explain yourself if someone challenges you, but we like to do it anyway.

Jess:  I know!  And with each card you play and discard, your available card pool gets smaller and smaller, forcing you to really get creative with your placements.

So those are the component games which make up The Metagame, but the components themselves are worth talking about, too.  The cards are really, really nice.  Matte finish can be a little hard to shuffle sometimes, but they feel great and the colors and illustrations are really attractive.

Jess:  And the contents of the cards are good, too.  A LOT of these party style games try to be funny by being ‘adult’ or edgy, and almost always come up short.  We’ve had our fun with Cards Against Humanity, but the inherent comedy loses what little shine it has so quickly, and it was sorta refreshing to not have dick joke after dick joke forced down our throats.

Jess:  YOU KNOW WHAT I MEAN. 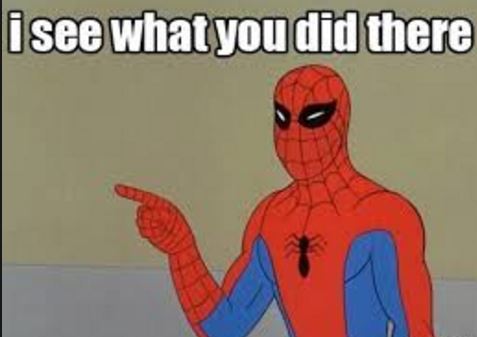 Andrew:  But yes, exactly. CAH and its ilk get their laughs from political incorrectness, they can too easily turn into racist, misogynist, and (possibly worse) boring piles of the same regurgitated half-jokes (and honestly, most of them start that way).  By diversifying the subject matter, The Metagame makes the possibility of the Lego-style humor much broader, letting you be funny in different ways.

Inevitably, The Metagame will run out of steam – you will see all the cards and the laughs will turn to chuckles.  This isn’t a deficiency in the game, simply a reality of the genre.  However, the game’s variable gameplay modes, paired with the add-ons which increase the card count, will extend its longevity well past that of other games of its type.

If you’re a CAH household and you’re starting to only smirk at the shock humor, META may be a good way to get a familiar but decidedly more engaging experience.  And as a simple party game for mid-sized (or apparently massive) groups of folks who just straight-up don’t want to play a game with a strong likelihood of a rape “joke” coming up (ugh, disgusting), The Metagame is a truly fun, undeniably better alternative to that whole morass of CAH-inspired sludge.

But that’s not to say we only like The Metagame in relation to its peers – it stands on its own merits quite well.  It’s still feather-light as far as games go, but there’s far more fun in this box than in its significantly more immature cousins, and it’s prettier to boot.

(Gameosity received a review copy of The Metagame.  We were not otherwise compensated)