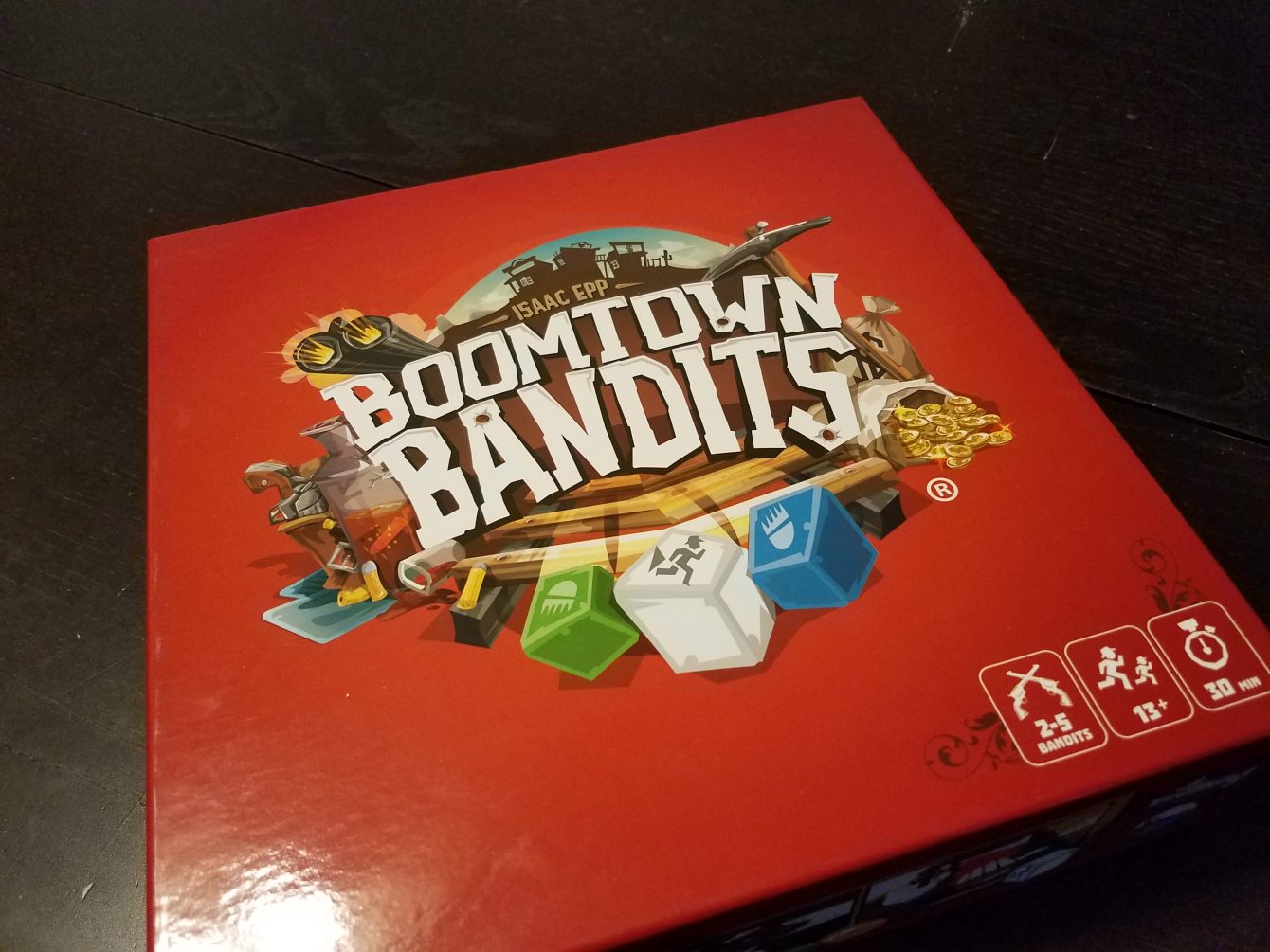 Boomtown Bandits is a light, real-time dice rolling shootout that will appeal to a crowd looking for a fun filler-weight game.  With really high quality production, quick gameplay, and lots of fun to be had, it's sure to please...unless you're looking for something with strategic depth.

So, confession time – I love Westerns.  I love the theme, of dusty cowboys and pearl-inlaid pistol grips and tall strangers in leather coats riding up face-to-face with tin-star law and lead justice.  And I’m in luck, because there are some really fun games that look to capture that theme; games like Bang! The Dice Game, Dice Town, and Tiny Epic Western.

Add to that list Boomtown Bandits, a real-time dice shooter from designer Isaac Epp and Breaking Games, where a pack of bandits (no surprise) have set their sights on stealing every dollar they can get their greedy hands on.  And to do that, they’ll be using the deadliest weapon developed by man – custom dice!

Jess:  Yee-haw!  Loves me some western motif!  But what’s with westerns and dice, anyway?  Feels like almost every game uses them somewhere.

Andrew:  Dice, gambling, bullets, shootouts, it all hangs together, somehow.  And I love that!

In Boomtown Bandits, you’ll be raiding several locations throughout town.  These locations, represented by tiles featuring Boomtown Bandits’ great art, are arranged in a line all players can reach, and each location’s particular loot deck is shuffled up and placed above it.

Each turn is comprised of 3 phases – Placement, Reveal, and (of course) Shootout.

In the shootout, each player who has a token at the current location will roll one die per token they placed there in a real-time contest of luck and speed.  Players have 3 tokens each, 2 regular and one ‘coward’, and which token(s) have been assigned determine which of the players 3 dice get rolled.

Rolling happens as fast as possible.  After a 3-2-1-DRAW! count, players will grab their dice and start chucking.  The regular dice have 4 blank sides and 2 Bullet sides, whereas the coward die has 4 blanks, a bullet, and a run away symbol.  The first one to roll any symbol (bullet or run away), they must yell ‘HIT!’, bringing the action to a halt.

If a bullet is rolled, the player who called HIT! gets to remove one opponent’s token from that location.  If anyone is left standing, players count down again and start rolling until there is only one left!

If a ‘run away’ symbol gets rolled, well, that’s bad news.  The rolling player is obliged to yell Hit, stop the action, and remove their cowardly posse member from the location.  That’s what you get for sending in a chicken!

Jess:  Of course, in the frenzy of rolling, it is conceivable that a player might miss their ‘run away’ symbol.  If anyone sees you roll that, they can call Hit for you.  If no one sees it, though, there isn’t really a mechanism to enforce your good behavior.  But like the rulebook literally says, ‘don’t be a jerk’!

Andrew:  Words to live by.

Once only one bandit has claim on a location, they take the top loot card from that place’s stack as a reward for their fancy shooting.  These prizes range in dollar value, and can also generally be activated once for an effect, such as Liquid Courage from the Saloon, which lets you treat your coward like a bullet for a single shootout, or the Mine’s Cave-in, which traps one of your shooters for a round but is worth a pile of cash.

Andrew:  The loot is where the theme really shows up.  In addition to boasting the really cool, really stylized art in Boomtown Bandits, the loot gives you all sorts of useful options for mitigating the hugely luck-based gameplay.

Boomtown Bandits is light and fast, with that real-time dice rolling mechanism really bringing a lot of fun giggles to the table.  While there is little in the way of strategy (outside of deciding which loot you are focusing on and perhaps when to spend a loot card), the game benefits from leaning into the chaos of the shootout for the bulk of its gameplay enjoyment.

Andrew:  That said, for as light as it is, it’s totally worth noting that it does have a few family-unfriendly cards (the Brothel in particular has loot that might make a parent cough uncomfortably), but it’s honestly fine, and good fun besides!

Jess:  I agree!  I honestly didn’t think that much of this one while we were learning it, but once we got rolling (hah), there was a good time to be had.  It’s so breezy!

Andrew:  Yeah, in every way, and that’s a fact that will either sit well with you or not.  There aren’t a huge number of rules governing the shootout phase – players are generally on the honor system regarding how they deal with their dice, and sometimes it can be a little bit of a chore deciding what order to resolve cards and effects in.  But honestly, who cares about all that stuff?  It’s a wacky little western roll-off.  Just enjoy yourself!

And while you’re enjoying yourself, take a moment to enjoy the component quality.  Nice dice, nice tokens, great art, and hey, even a whiskey bottle to spin to determine first player!  Even the insert is thoughtfully crafted, a fact which we really appreciate.

Boomtown Bandits is a well-made, well-designed piece of fluff, and I say that in the best possible way.  Its a luck-fest, but for those who normally hate that, the real-time aspect actually acts as a salve, letting you have goofy fun without the need to be surgically precise in your gameplay.  Maybe it isn’t for everyone, but honestly, we think it can be for anyone, and that’s some straight shooting for you there, pardner.

(Gameosity received a copy of this title for review.  We were not otherwise compensated.)