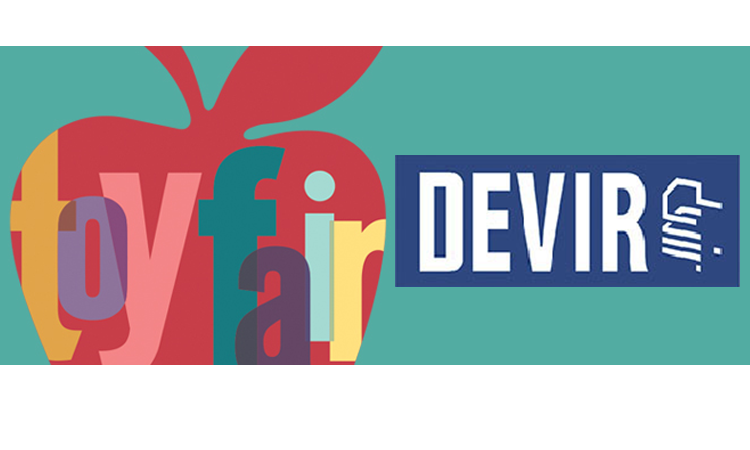 Sometimes you attend a conference and run to and fro, meeting to meeting, making contacts, throwing business cards into the air like you just don’t care and then sometimes you take a seat at a table and have what turns out to be a really pleasant chat.

That was our experience with Matt Hyland, Managing Partner of Devir. After a long day of meetings we took a seat at his booth and just hung out for a few minutes. While we relaxed, he told us a bit about Devir Group and how it was founded in 1987 in Brazil as a company who could bring Spanish speaking books and games to a larger audience around the world.

I’m really impressed with the quality of the Devir games I have had a chance to play and now having met Matt I understand why. They really do put a lot of love and care into their games. 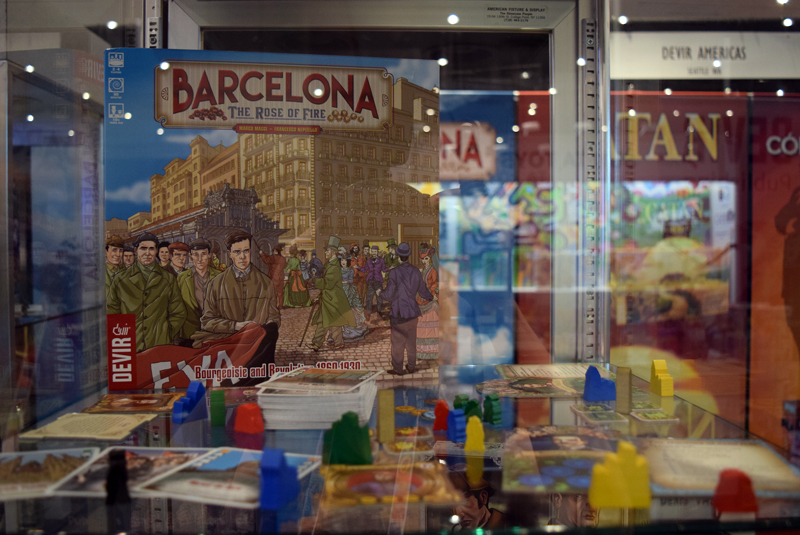 Barcelona: The Rose of Fire

Barcelona: The Rose of Fire is city-building/area-control game for 2-4 players. It is based on historical events in the late 19th century as the city walls have been removed and now the city has room to grow. The upper classes are expanding their fortunes by building new construction, but if they don’t take care of their workers, things could crash down around them.

Players take turns constructing buildings that will earn them points, but they must balance the types of buildings between the higher scoring prestigious locales and lower scoring quarters for their workers. The game is played over a series of eras and at the end of each era, workers used are placed into a bag. Depending on the level of unrest they have earned by building, a number of workers are drawn from the bag. The player with the most workers drawn suffers a strike. 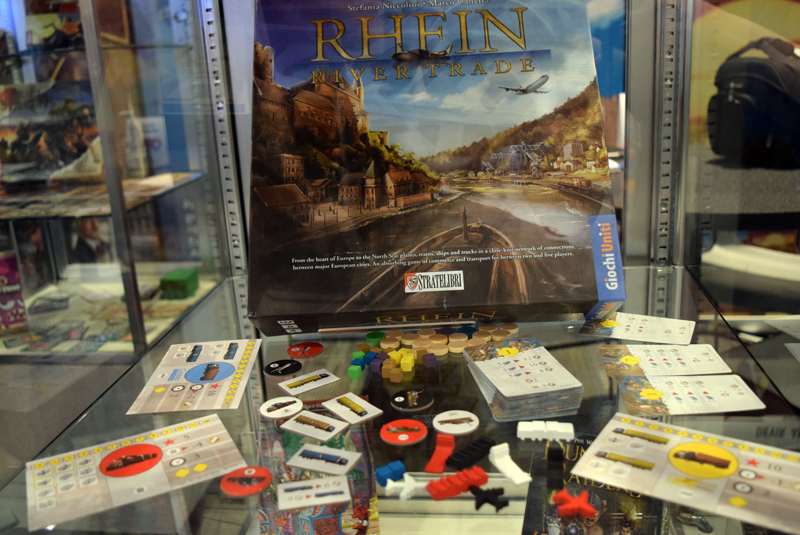 Rhein River Trade is light to medium euro pick up and deliver game for 2-5 players. In the game players are trying to transport goods on the same planes, trains and ships as their competitors. 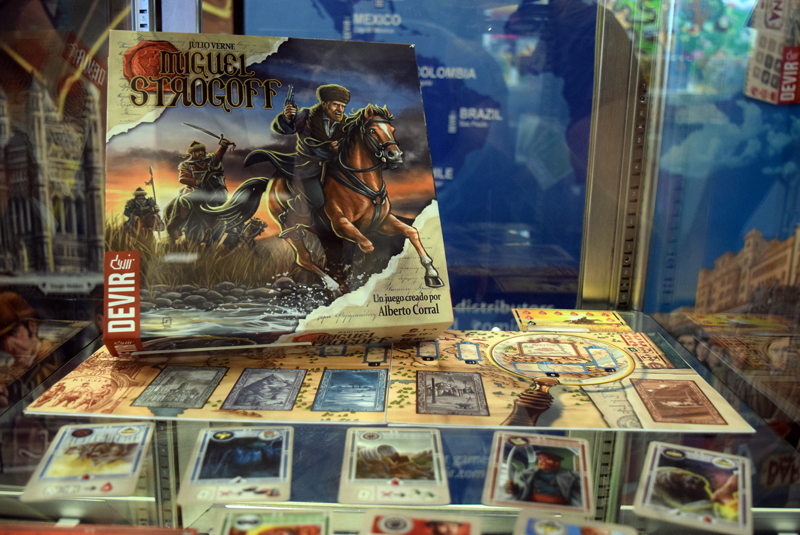 Miguel Strogoff is a racing game based on the book Michael Strogoff: The Courier of the Czar, written by Jules Verne. Each player is a courier for the Tzar and must deliver an important message to the Tzar’s brother in Irkustk before a traitor arrives there. The goal of the game is to be the first to arrive to Irkustk and to defeat the traitor before he can kill the Tzar’s brother.

The trip is made along a series of spaces that represent different areas in Russia, the Urals and Siberia. Every turn the player has to decide whether to advance to a new space, rest in order to refill energy, draw cards, or cope with the perils encountered on previous turns.  This is a competitive game, but if no one arrives Irkustk on time to fight the traitor, all the players lose the game.

Jess: Think it’s kinda neat that you are competing against each other but also the board. You don’t usually see a racing game where everyone can lose.

The street date for Miguel Strogoff is not set yet. 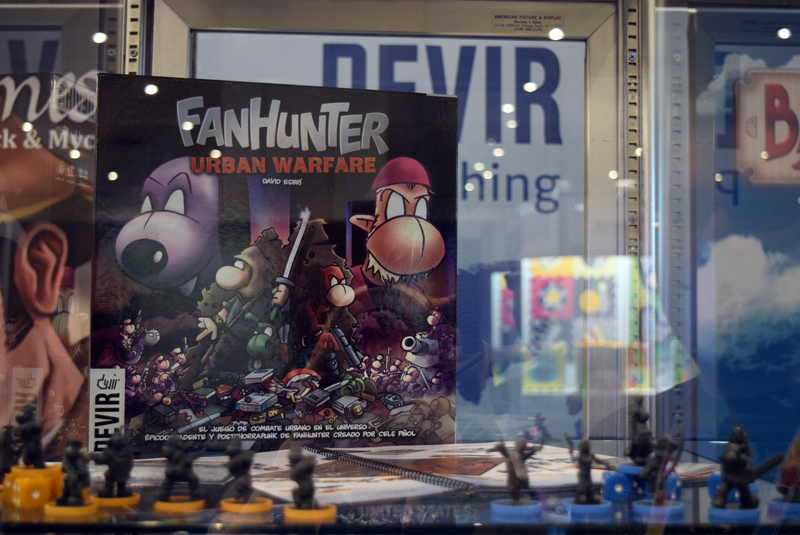 Designed by David Esbri and illustrated by Cels Piñol, Fanhunter: Urban Warfare is based on a comic series where the government has banned all forms of geekery. Fans of comic books, games, films, and toys are being hunted down. Players take on the roles of the resistance and the hunters, moving their minis around the board trying to complete their missions and win skirmishes. The game has a complete campaign that you can play through that helps tell the story of the series.

The street date for Fanhunter: Urban Warfare is not set yet. 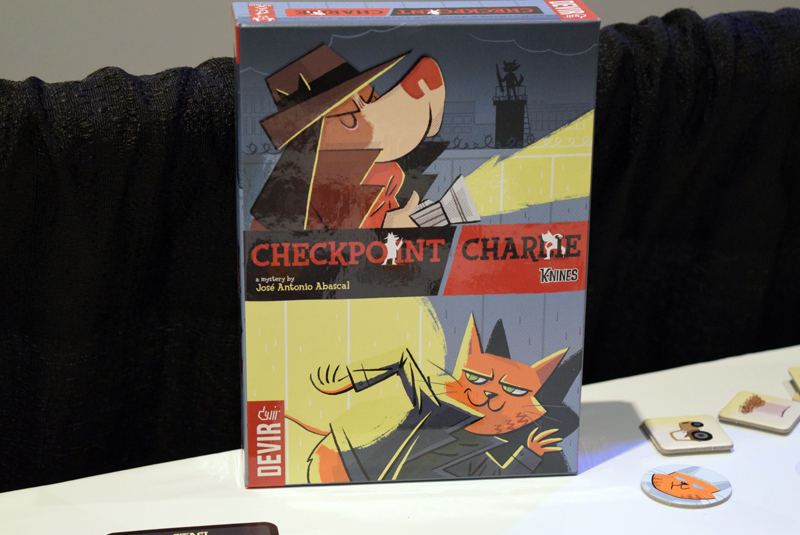 Checkpoint Charlie, designed by José Antonio Abascal and illustrated by Joan Guardiet, is a deduction game for 3-5 players. Everyone is playing doggy investigators trying to sniff out the feline spy. Each player will get a card representing 1 of the five traits the spy possesses such as a hat, glasses, or perhaps a dapper sweater. Players will reveal suspect cards and dismiss them based on their lack of the spy’s traits. Observant players will be able to deduce the relevant traits by watching which cards their competitors dismiss. 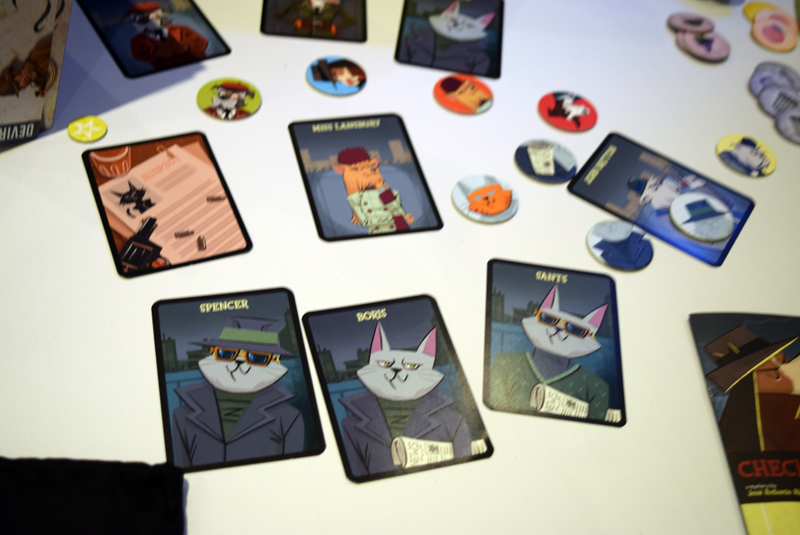 Jess: I really like the cartooney cold-war ear art design. I think Checkpoint Charlie can make for a fun family night game.