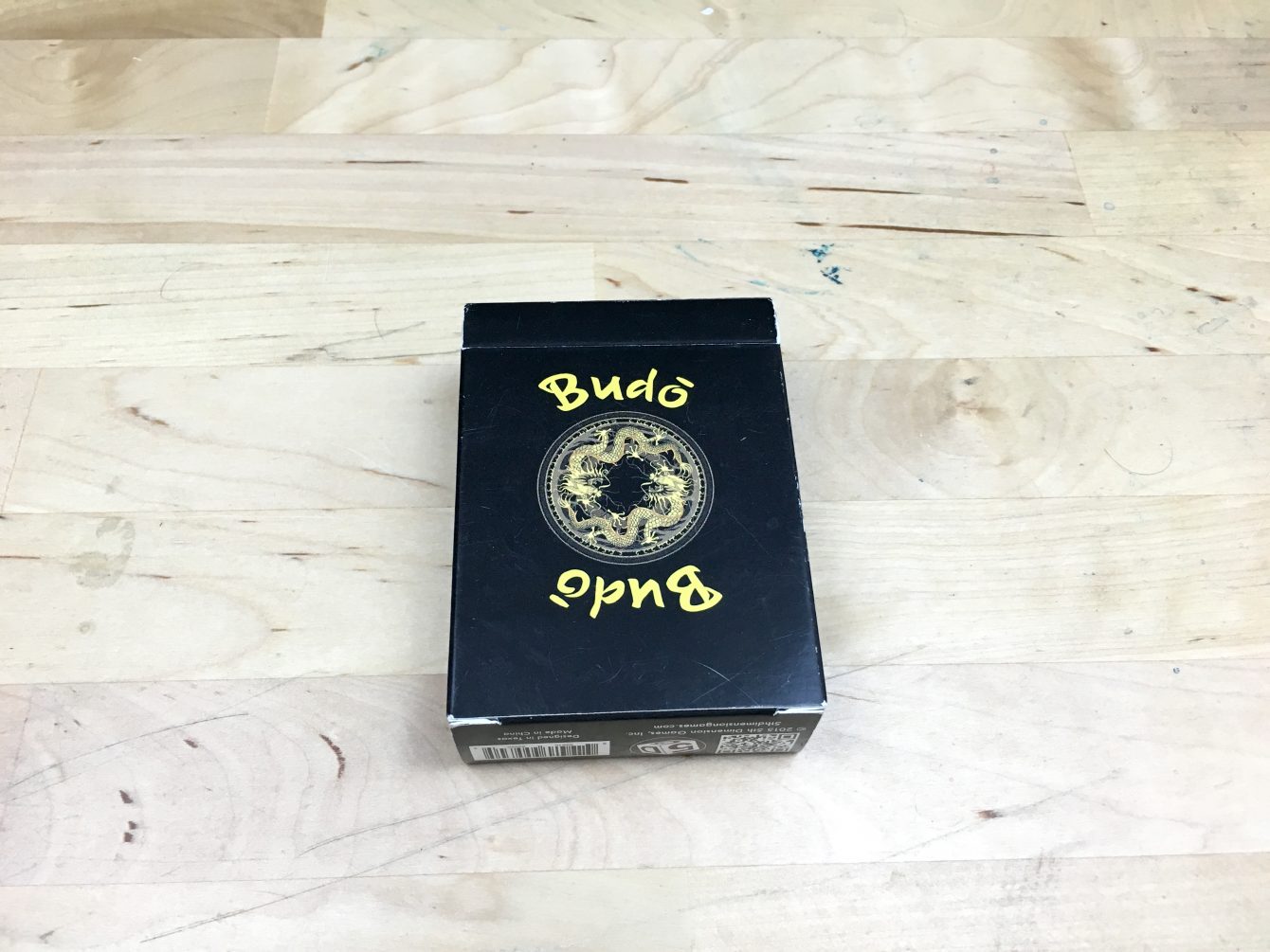 Diana: Let’s get this over with.

Rob: Whoa, whoa, whoa. At least give me a chance to do the intro before launching into things.

Diana: I’m sorry but I can’t get over how wrong the artwork is. The stances, the forms, the implied movement, it’s all wrong!

Rob: Okay, background in karate, I get that. What did you think of the game itself, though?

Budo, from designer Brian Parrett and publisher 5th Dimension Games is an interesting idea in theory. It’s a two-person card game duel, with each player selecting one of four fighting styles (Karate, Mmuay Thai, Boxing, Tae Kwon Do) and seeing who can come out on top. It’s kind of like Battlecon, but meant to be more realistic than cartoony. Sounds decent, right?

Having a handful of fighting styles is a nice touch, and being able to fit all of those separate decks into a single tiny card box is great. It’s also pretty cool how the different fighting styles actually behave differently; Karate is more about up close fighting, Tae Kwon Do fighters prefer keeping their distance, and so on. There’s a fair bit of variability here, and that’s even before you start to factor in things like customizing your deck mid-fight by adding more advanced moves.

Diana: It’s a little weird to be gaining belt ranks in the middle of a fight.

Rob: Definitely not something that would ever happen in real life, but it’s a card game.

Diana: I know, but that coupled with the ridiculously incorrect poses in the artwork really bugs me. It’s like they’re going for realism but stopped worrying about it once the basic idea was drawn up.

Rob: You do have a point there.

I also have to admire Brian Parrett’s attempt to have the entire game contained in a single deck of 70+ cards. No board, no tokens, no meeples – just cards. For the most part it works well, too. Having to sort through the rules is a bit awkward, as is being directed to a website for more detailed rules, but just about everything you need to physically play is in handy card form. Everything except a way to track Stamina.

Granted you only have a maximum of four Stamina points to spend on a turn, but when you’re juggling movement and card buying and attacking it can be pretty easy to lose track. Some way to monitor Stamina use other than providing your own tokens (or whatever else works) would’ve been nice. The health and experience trackers work well enough, at least.

The real problem is that Budo feels more like you’re going through the motions than locked in a epic fight. I suppose that makes a certain kind of sense because it’s meant to be at least somewhat grounded in realism, and an actual fight like this would be much more subdued. Fighters waiting for openings, looking to exploit weaknesses, etc. But it’s also a game, and as a game it’s not particularly exciting.

Rob: Even though I was more open to it from the beginning, I have to admit that I’m not terribly impressed. There’s kind of a little bit of strategy to it, maybe, sort of? But everything settled into the same pattern of using a basic attack to trick you into blocking, then following up with a stronger attack.

Diana: To be honest I just didn’t care enough to try and save my blocks. There wasn’t anything about this game that appealed to me.

Rob: I have to give you credit though, it was clever how you kept using attacks that changed your positioning to get around some of my blocking.

Diana: I was just putting cards down so the game would end faster.

Diana: I mean I can see what they were going for, but between the incorrect forms, the art that looks like a bunch of placeholder images-

Rob: Oh wow, yeah, I hate to rip on something that I imagine took a fair bit of time to put together but that art style just doesn’t do it for me.

Diana: Me either. But between that, and the combat feeling so dull, I don’t see myself ever wanting to play this again.

Rob: I’d be willing to give it another shot, but yeah, I won’t be going out of my way to play it again either. It’s not bad, it’s just…