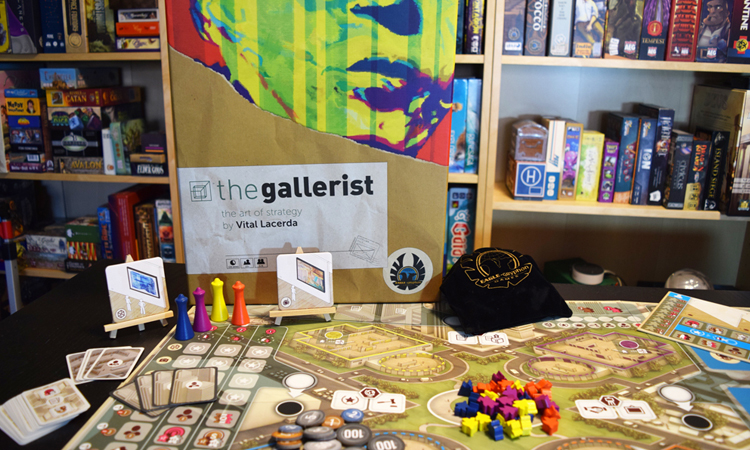 The Gallerist is a deceptively complex game, where a relatively narrow field of choices leads to deep, ponderous turns.  The theme comes through in several key gameplay elements and the production quality is gorgeous.  While its weight may alienate some (though it's not so bad) and it does lag a bit at max players, The Gallerist is an impressive piece of game design, and fun to boot.

There is a fundamental human fascination with art.  Sure, not everyone wants to spend the afternoon wandering around museums taking in the works of the classic masters, but on some level, nearly every human I have ever encountered had a piece of artwork, be it a painting, photograph, sculpture, or piece of music, which resonated with them, evoking raw emotion that connects to the very core of a person’s soul.The Gallerist is rooted in this concept, with players acting as gallery owners, discovering new artists and showing their work to the world.

Jess:  Heck yeah!  As an artist, it’s really important to me that people respect and value it.  I’m really excited to see a game…about…wait-

Jess: Ah well, no one said being an artist means you have to starve, I guess.  Let’s open some galleries! 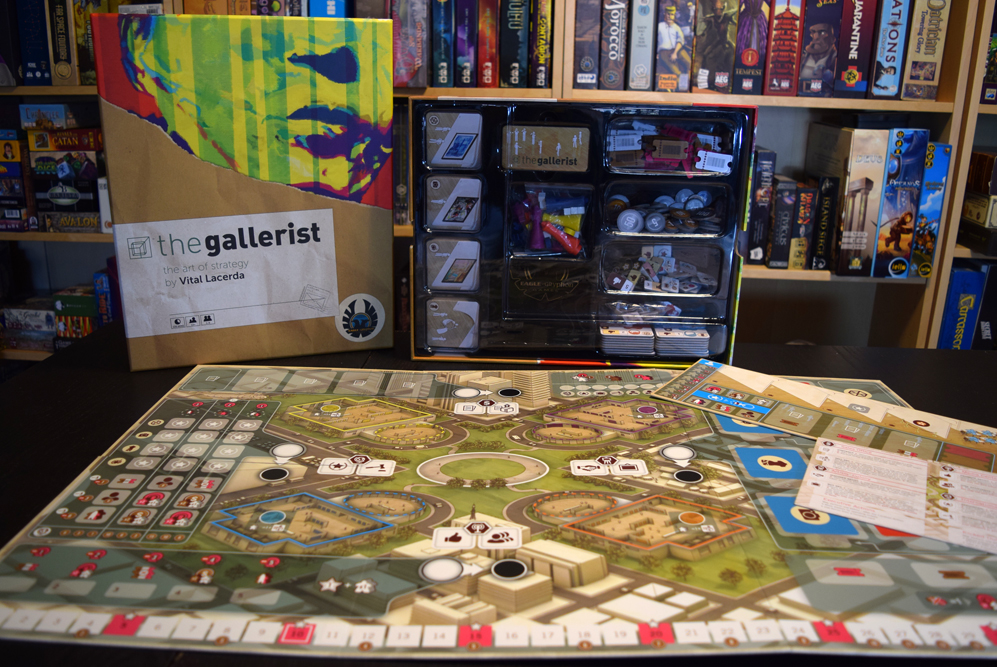 The Gallerist is a medium/heavy worker placement Euro, and for those of you who don’t speak fluent Board Game, that means a thinky game of indirect competition, where each player will move their lone piece around the board to activate different actions, all in the name of ending the game with the biggest pile of cash.

Jess: Of course, put that way, it seems a little soulless, and that really isn’t the case.The Gallerist has a lot going on beneath its well-polished veneer, and some of it is actually highly thematic.

Andrew: Absolutely.  Some of the game is spent on some really abstract worker placement stuff, but in particular it’s the mechanics surrounding the artists themselves that provide the highest theme penetration.  But lets talk overview. 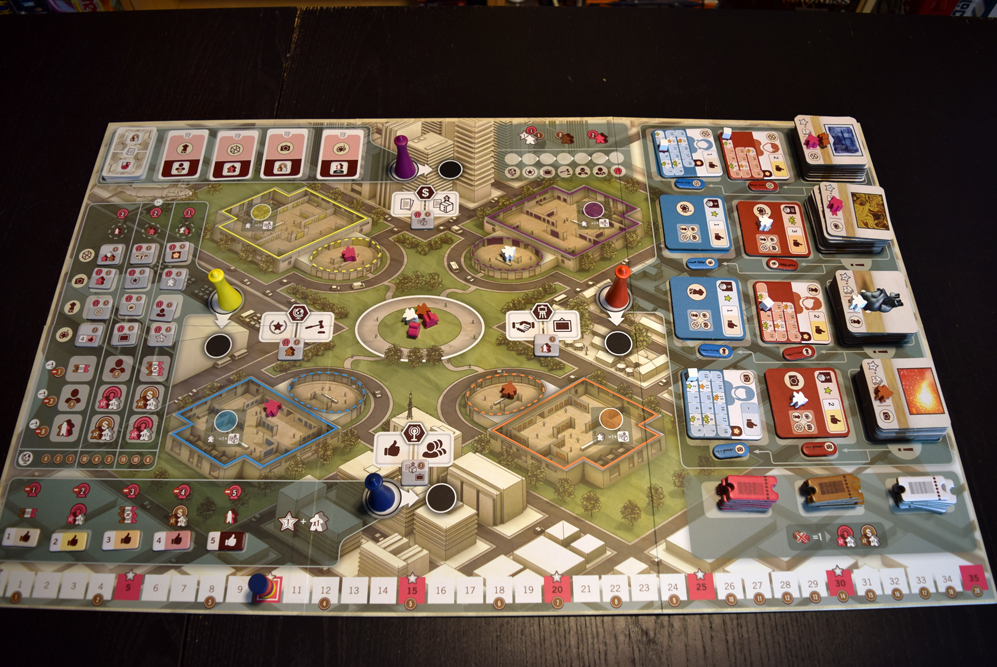 Over the course of the game, players will discover and commission artists, hire and dispatch assistants, conduct media promotions, fulfill sales contracts, and attempt to have a steady stream of visitors to their personal galleries.  Of course, cash almighty is the end-goal of each gallerists’ strategy, but the’s also Influence to be considered, as it allows you to manipulate markets and secure extra actions, among other things.

The mechanisms inThe Gallerist are fairly wide and decently complex, so our rules summary is truly just that.  On each turn, you will be presented with a simple choice – where to move your Gallerist piece.  This piece determines which of the possible actions you may take – 2 possible actions for each of the 4 spaces – and players do not block each other (though going to a space where someone already is benefits them, so you need to take that into consideration).  In broad strokes, the spaces are: 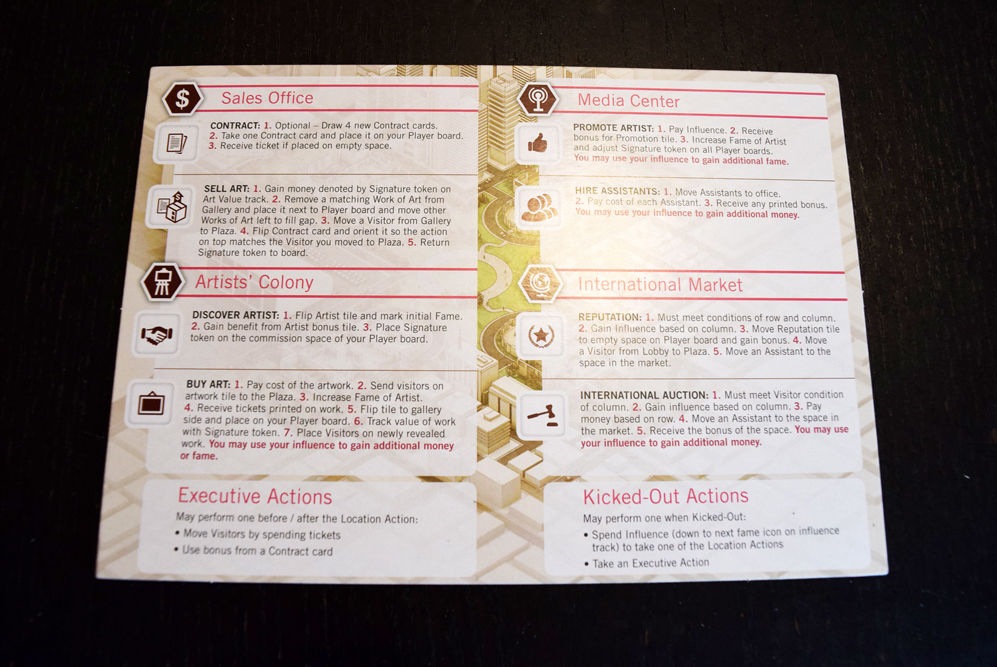 Jess: Now, that may feel like a relatively abbreviated list of options for something we’re calling on the heavy side, but trust us, these simple options really lead into a lot of possibilities.

Andrew: For sure.  This is really only a top-down look at the rules.  We didn’t talk about how all these little systems, each relatively simple, come together as a whole.  We didn’t mention Kick-Out actions, or how a player’s gallery works, or secret goals or any of the other dozens of little details that makes the game hum.

Jess: But hum it does.  I really likeThe Gallerist, not despite its complexity, but because of it.

Andrew: The complexity inThe Gallerist comes from making the best choices you can in the moment, when options and resources feel surprisingly tight.  It rewards good planning, but also has elements of luck and several paths to victory, a hallmark of a good game in its weight-class.

Jess: Honestly, I was really intimidated byThe Gallerist when we first opened it.  There is, visually, so much going on, such a huge board, seemingly so many things to keep track of and options to weight.  And all that is true, but strong iconography and lots of little choices (rather than fewer huge ones) makes for a really satisfying experience.  And you get to put art all over your gallery, and I love that! 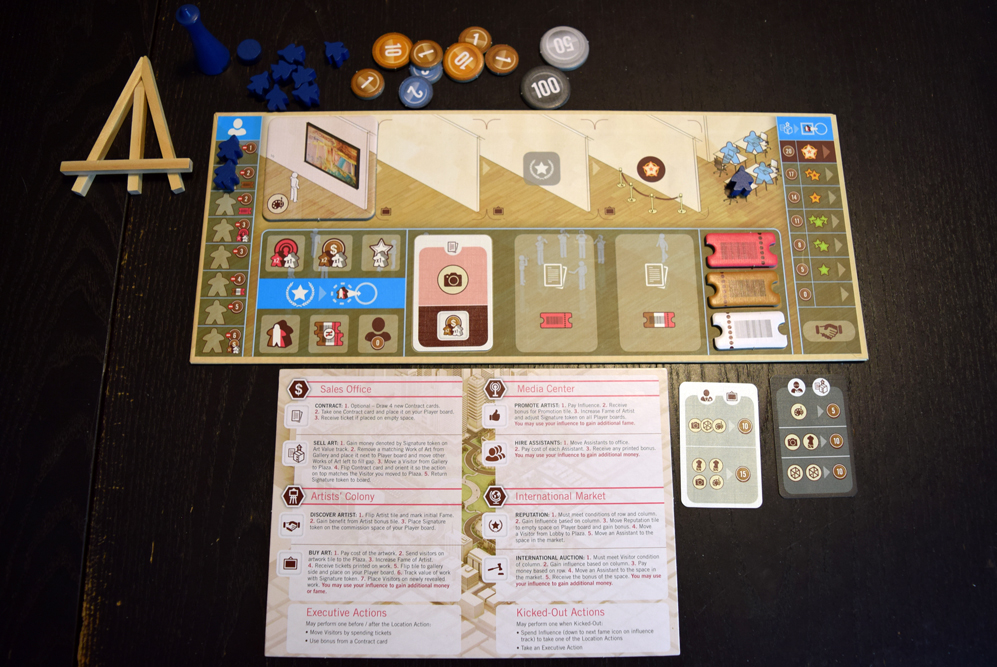 Over the course of the game, players will balance their actions between the various options, trying to gain the most profit.  Central to the gameplay is the promotion of artists and their work.  By commissioning relatively unknown artists, players can cheaply acquire their art.  By then using the gallery’s influence to increase the fame of these artists, a canny gallerist can cause the value of their artwork to skyrocket, so that later sales far outstrip the initial cost of investing in the artist.

Jess: Does it feel a little cut-throat and corporate?  Yeah, admittedly, it does.  But remember, the game isThe Gallerist, not The Artist.  Dollars are victory points, so buying low and selling high is as important in this as it is in any other game of economics.

Andrew: Maximizing your profits is about more than just buying the right art.  By playing around in the international market, you can secure more points, and by carefully spending Influence, you will be able to benefit from bonus actions which will make your turns even more effective.

The Gallerist is only as complex as you and your fellow players make it, in some ways, because if someone is taking advantage of all the little rules and options, they will likely do better than someone who is doing the minimum per turn they are allotted.  Still, there is a fine balance, and very few opportunities for players to directly influence each other, so everyone can sort of play their own game, for better or worse.

Andrew: Until someone uses their tickets to tempt guests out of your gallery and into theirs…

Jess: Hey!  Not my fault my cheese plates have a tremendous appeal!

The game does have some pitfalls, many of them because of the kind of gameThe Gallerist is.  It lags at higher player counts, playing best (for us, at least) at 2 or 3; 2 players makes the game a little more solitary (you will get Kicked Out actions far less frequently, for example), but at 4, turns can start to drag and it takes a long time for play to come back around, even with relatively decisive players.

Another issue we had with our plays is that, at a certain point, you do occasionally run out of oomph for a turn or two.

Andrew: Highly technical reviewer term.  What I mean is that on some turns, you are left spinning your wheels a bit, either gathering resources or positioning yourself, so they don’t necessarily feel hugely productive.  It’s not terrible, but, for example, there were times, especially as games were wrapping up, where my last turn or two left me basically unable to increase my score no matter what I did, and that can feel lousy. 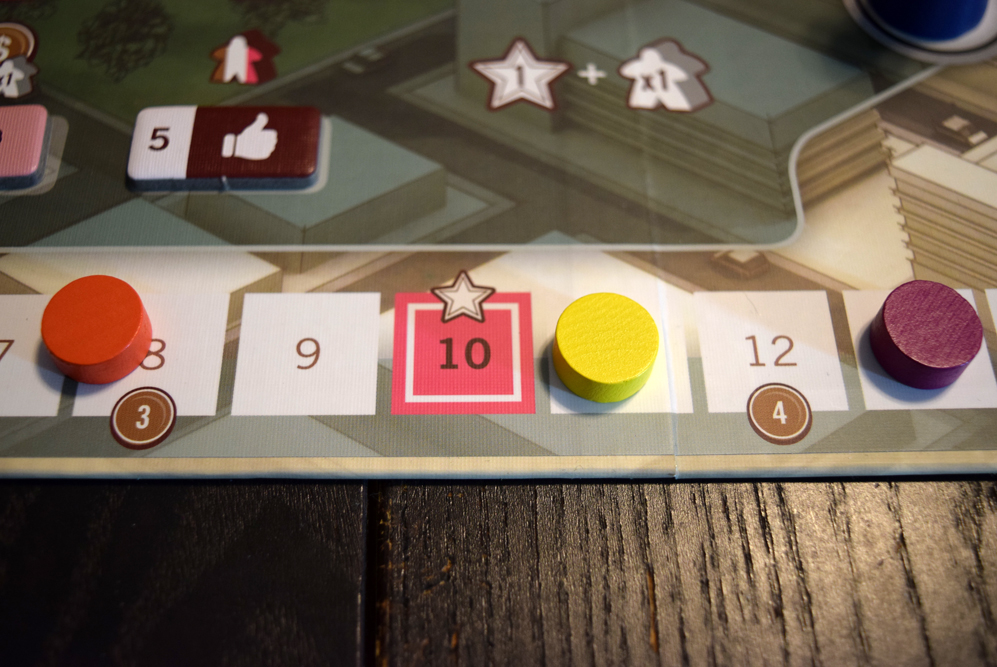 And pursuant to that is that, in the end, it is possible for luck and planning to coalesce into a huge pile of endgame points – two kinds of hidden scoring goal cards and a plethora of other little scoring opportunities provide last-minute cash, and if players have been smart and fortunate, the first place player shouldn’t necessarily feel secure going into final scoring.  But on the other hand, if things haven’t gone your way, it is possible to be left staring at your goal cards, one or two moves away from a game-swinging gain, and be utterly unable to get it done.

Finally, it need be noted that you will be playingThe Gallerist for a while.  This is a 2-3 hour game, especially before people are really familiar with its mechanisms.  Even once they are, it will go on, and will probably be the only game you play that day, for better or worse. 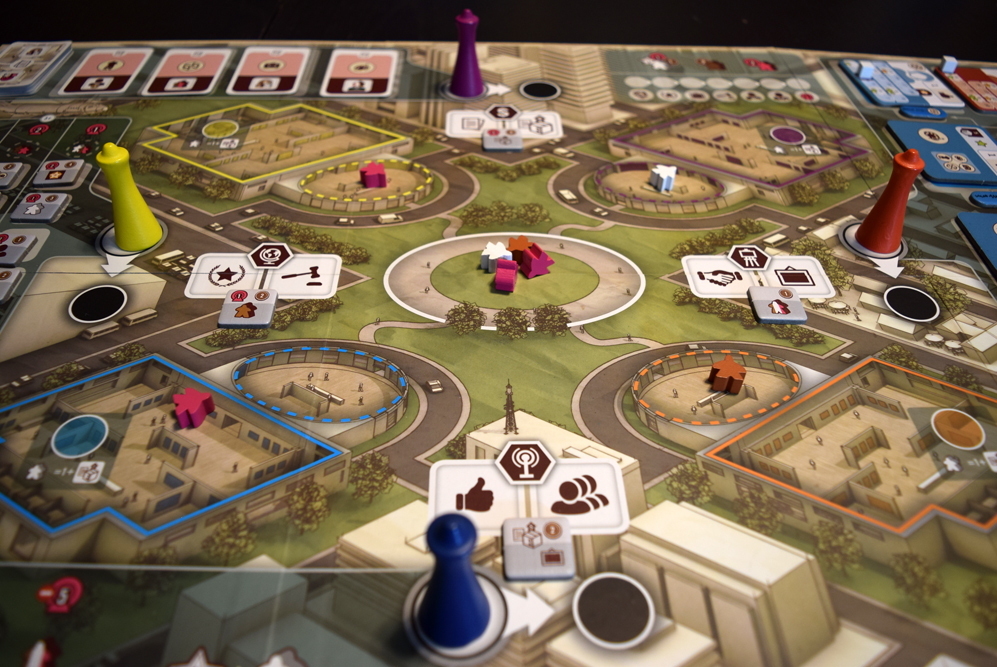 Still, those last few tics are basically ‘your mileage may vary’ criticisms, and none of them detract substantially from what a beautiful, intricate gameThe Gallerist is.  It is well-designed and less intimidating than it may first appear, but it won’t be for everyone.  That said, it is for us, and we recommend it for anyone who wants something a little meatier (and a whole lot bigger) than the usual light fair we tend to review.