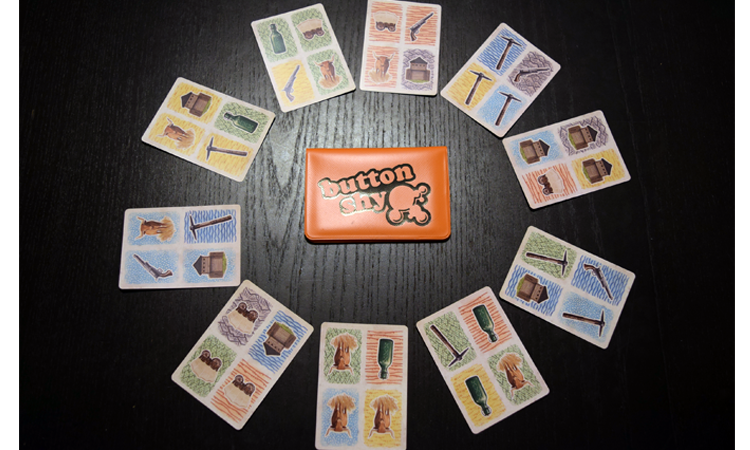 Circle The Wagons is a great little bite for 2, combining satisfying but simple mechanics with thousands of unique scoring setups.

In the realm of 2-player only games, we at Gameosity look for certain kinds of interactions.  We’re not big on highly combative games in general, and that’s even more pronounced in 2-player mode – when just beating each other down is simply boring (at least, it often is – there are always exceptions).  What is far more fun (for us, at least) is when we get to build something; and in Circle The Wagons, up on Kickstarter now from Button Shy, what you will be building is a tableau of the old west itself.

**Kickstarter Prototype Heads-Up!  This prototype was provided to us – images not final (but still very nice)** 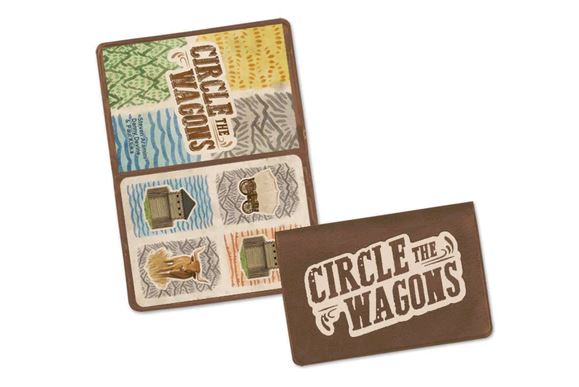 Andrew: Circle The Wagons ticks a lot of checkboxes for great 2-player games from the get-go.  It’s a wallet game (Button Shy’s signature style) so it is incredibly portable, and doesn’t take up a huge amount of table-space (though it definitely will require more than a little.

Jess:  It’s also quick and accessible, with tons of replayability, thanks to the absolutely bonkers number of scoring options.  But let’s do the overview thing before we get into specifics.

In Circle The Wagons, players will take turns drafting cards from the circle of available ones, adding the cards they draft into an ever-expanding tableau of old western territories.  Each card is divided into 4 regions featuring a variety of terrains, and may or many not display one of the several old-timey icons, like 6-shooters, forts, and cows.

Andrew:  Is there a difference?

Anyway, quadrupedal mammalian nomenclature aside, the objective of Circle The Wagons is to score the most points at the end of the game.  Points are awarded for number of squares in your largest block of each terrain type (so your biggest desert, your biggest forest, etc.).  Points are also awarded based on 3 randomly-drawn end-game scoring criteria, which will specify bonus points for certain arrangements of territories/symbols, possibly adding a huge amount of complexity to the drafting choices. 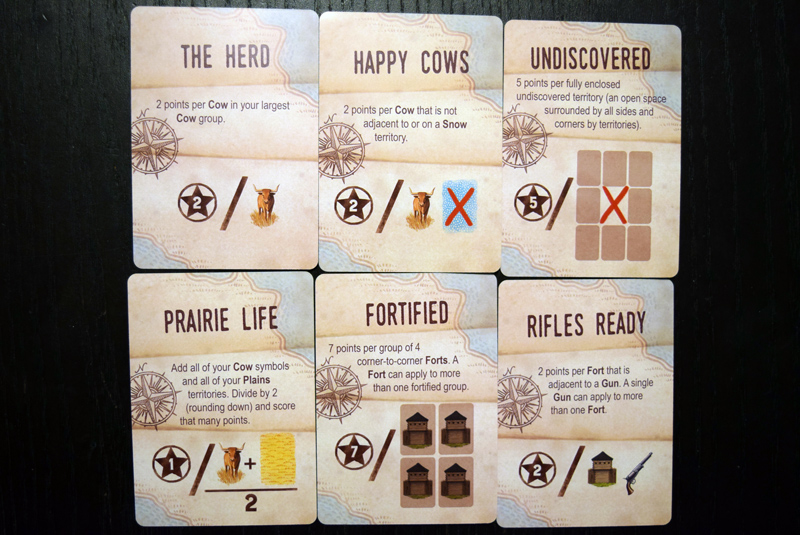 Andrew:  And choices are where Circle The Wagons shines, which is ironic, given how pint-sized the game is.  On your turn, you have 2 simple choices to make – which card to I pick up, and where do I put it.

Jess:  Figuring out where to put a card is generally pretty simple – you look at the end-game bonuses available, and if nothing else hope to make large blocks of single territory types.  Complicating that first choice, though, is the drafting mechanism Circle The Wagons is build upon.

The circle of cards is more than simply aesthetic – the active player can decide to pick up any card in the circle, starting from the empty space created by the last player’s turn.  However, every card skipped will be given to your opponent, possibly giving them the opportunity to create big swings in points, based on what they get and the arrangements they are working on. 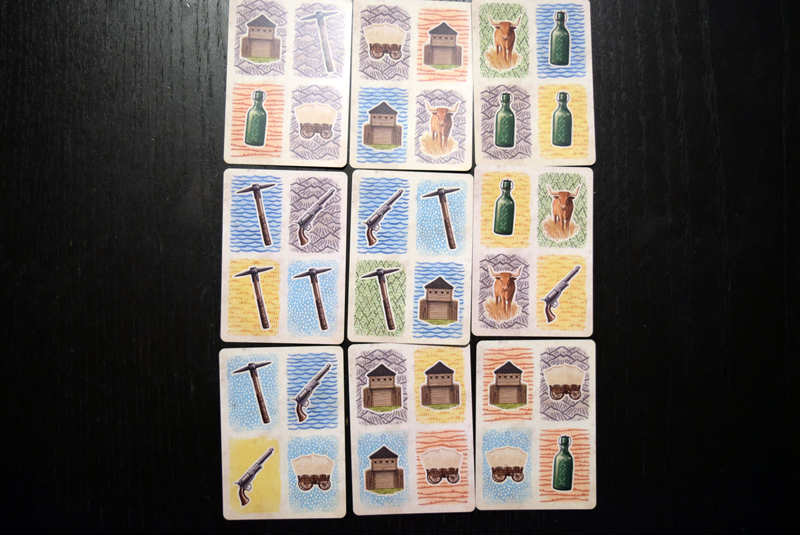 Andrew:  Another great game that has a similar mechanic is Patchwork, but in Circle The Wagons, with it’s ‘micro’ sensibilities, each decision is really compressed – every card you pass to your opponent is a possible windfall of points for them.

Jess:  Right, but in the meantime, getting exactly the card you need can be a huge deal for you!  And so there is this really fun, tight cost/benefit analysis you need to make every turn.

Andrew:  But it’s a simple decision, so it doesn’t have to be a brain-burner.  Circle The Wagons gets a lot done with less than 20 cards and less than 15 minutes, compressing a genuinely enjoyable gameplay experience into a tiny, portable, incredibly accessible nugget.

Once you have a card, either because you picked it or because your opponent skipped it, the next choice is where to add it to your tableau.  Cards can be laid orthogonally adjacent to other cards, or placed over pieces of already-placed cards.  This will allow you to create large blocks of single terrain types (each terrain scores at the end of the game) and/or align symbols and terrains in configurations which will net you points as per the 3 scoring cards. 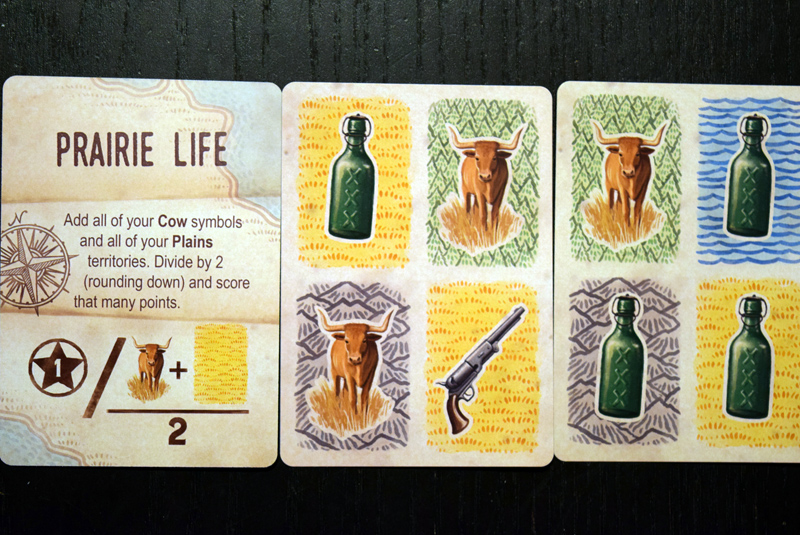 Jess:  Again, here we’ve got a really straightforward mechanic which drives the game very well.  How do I arrange my new cards for optimal points?  I really only have a few things to consider, but it can be so satisfying to drop a card in the perfect spot to complete a scoring opportunity or join up 2 pieces of forest to create one huge territory.  Simple but fun!

Circle The Wagons has the added benefit of looking great.  The understated aesthetics, brought to the game by the wonderful Beth Sobel, are really attractive on the table.  It would have been easy for this game to look boring or generic, but somehow the art is perfectly tuned to the gameplay experience.

Simply put, Circle The Wagons belongs in your collection.  As a go-to filler for 2, it provides a great light-weight dose of entertainment, never overstaying its welcome for a moment.  Our only criticism of it is, ironically, that it isn’t nearly as compact on the table as we wish it were – you won’t likely be playing this one at dinner or on the go.  But if you’ve got someone to play with, a table to use, and 15 minutes to kill, Circle The Wagons is going to be a perfect fit.

So head on over to the Circle The Wagons Kickstarter page and grab yourself this great little wallet game!