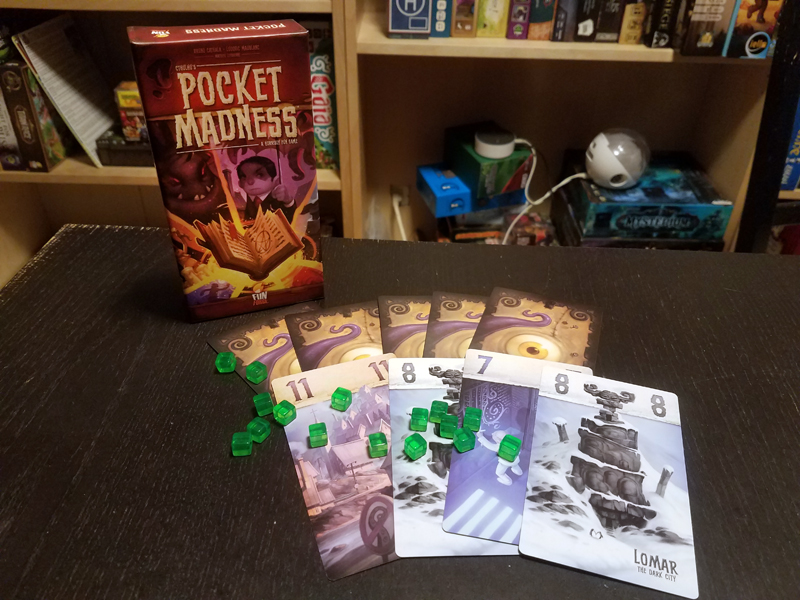 Pocket Madness is a well-produced little abstract card game.  While the minds behind it have designed some excellent games, overly-simplistic mechanics and occasionally-slow gameplay temper this otherwise perfectly playable filler into the 'average' category.

We like card games here at Gameosity – Jess adores a good trick-taker, I like set collection, and we all enjoy the often quick, accessible weight most good card games feature.  So when we heard that Bruno Cathala & Ludovic Maublanc had a new compact, filler-weight card game coming up, we just had to check it out!

Pocket Madness is a simple game.  Wreathed in the completely superfluous, but attractively-applied Lovecraftian aesthetic, Pocket Madness is essentially a rummy-style set collection game, with each player is trying to empty their hands as quickly as possible while avoiding the accrual of madness cubes. 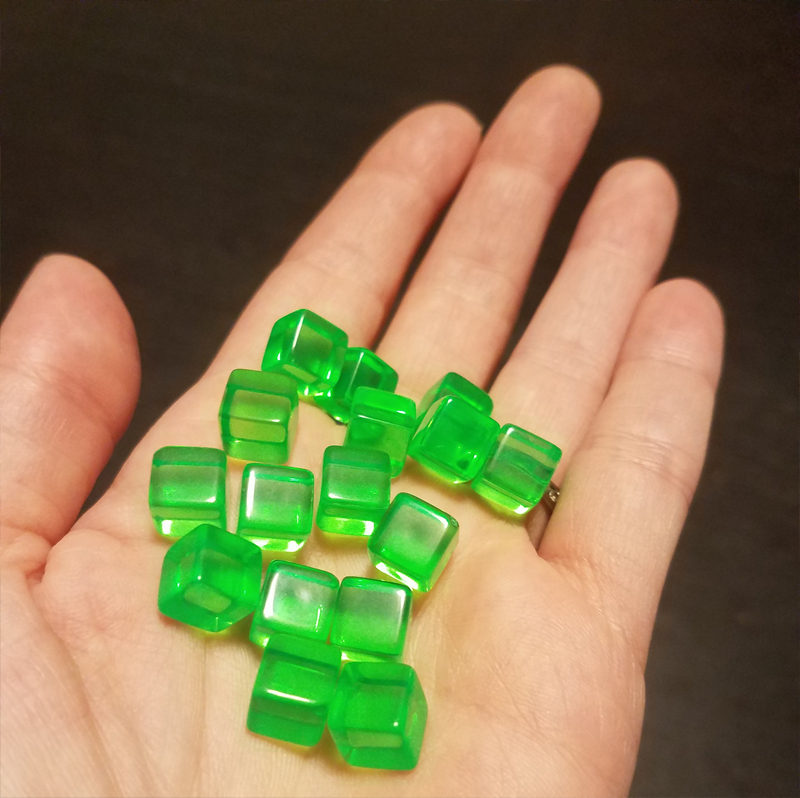 Andrew: Well, they’re green, and having them is bad, so…yeah. 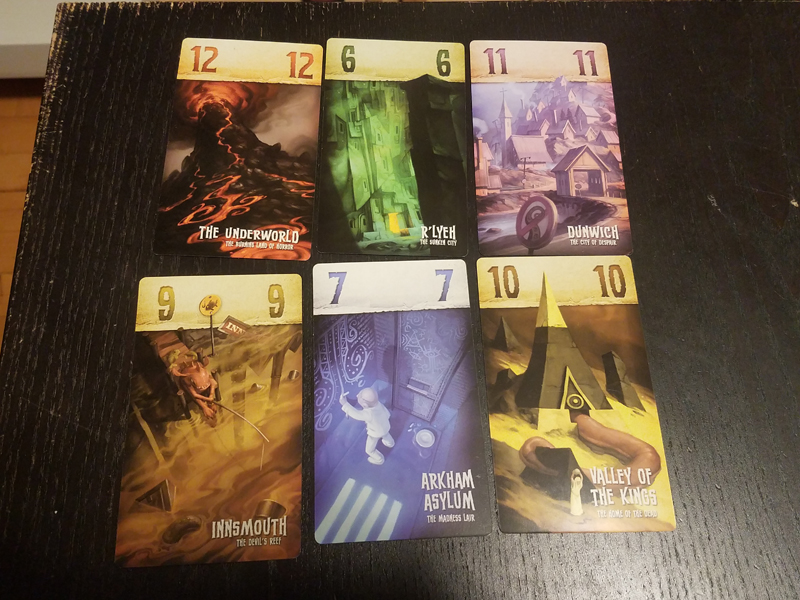 Jess: So let me get this straight.  The location cards are all values 6-12, right?  And they all get splayed out for everyone to see?

Andrew: Except for the face-down 17, and the cards dealt to player hands, yes.

Andrew: Because of MADNESS!!!!…and maybe some game balance?  I have no idea.

On each player’s turn, they choose from between 3 actions and take exactly 1.  Keep in mind that the names of these actions are as pasted-on as the rest of the theme:

Beyond that, the only thing players can do on their turn is use as many of the Portal card powers as they have access to and want to use.  Each portal, earned by playing sets of identical cards, has a 1-time use power.  The utility of these powers are generally valuable, like Dagon who lets you simply take another turn, or Shoggoth, who forces your opponents to spend their next turn only drawing a single card.

Jess: Then there’s Azathoth, who just makes people randomly discard, which can gum up your opponents’ turns at best, but at worst makes them one card closer to emptying their hand.

Andrew: And then there’s Gug, who just refuses to play. 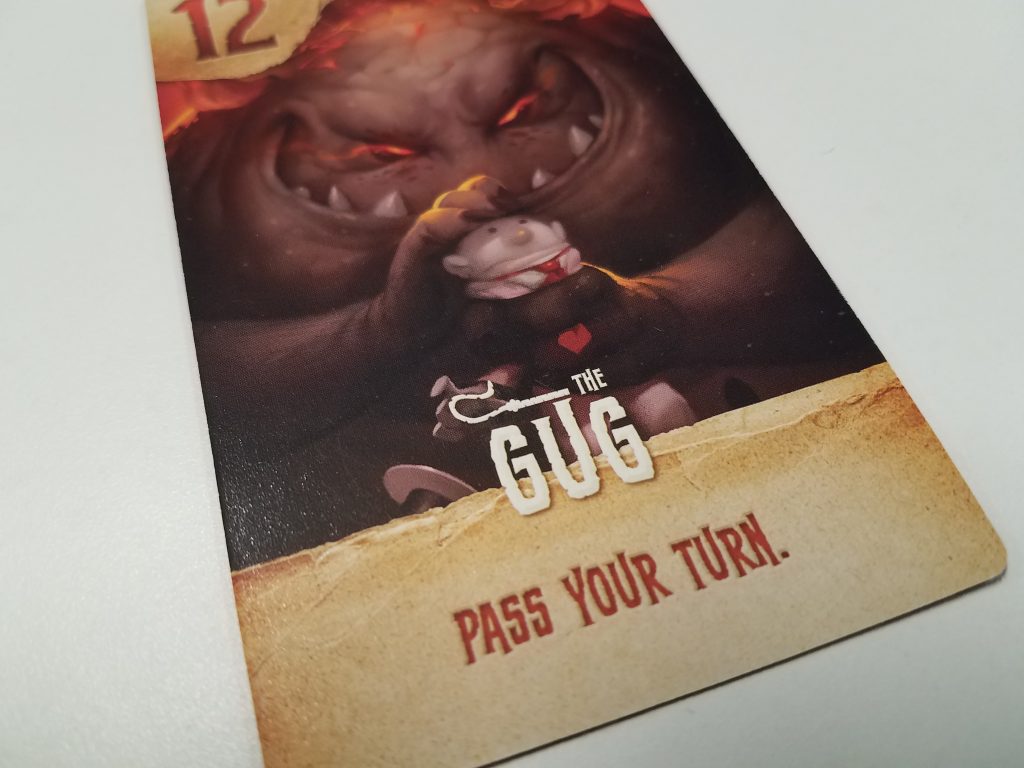 A round of Pocket Madness ends when either a) a player empties their hand, or b) the location deck runs out.  In either case, madness cubes get assigned to players based on how many suits they still have in their hands at round-end.  As soon as a player has 10 or more cubes, the game ends and the player with the least cubes wins.

Jess: So, there are some really good things about Pocket Madness, stuff we did really like.  The art is fantastic, the concept easy to learn, teach, and play, and the tiny box is just perfectly portable!

Andrew: Right, but the setup isn’t – all those cards splayed out takes up a lot of table space, which is somehow unfitting of the game’s apparent weight.  And more importantly, for a game about mad cultists driving each other over the edge of insanity while tearing open the fabric of space to breach the worlds of the Outer Gods…well, it’s not really that interesting.

It’s not just that Pocket Madness is an abstract game with a pasted on theme – we don’t love that, but it’s hardly a deal-breaker (and nowhere near unique to this little game).  The problem is that the theme is pasted onto a kinda average game.

In our plays of Pocket Madness, lots of time was spent drawing up cards in preparation for big plays.  In a 2-player game, it was often in your best interest to spend most of your turns drawing, then machine-gunning out a few straights or sets in a row, then (if the round’s not over) drawing another pile of cards.  That meant a lot of time doing nothing more than adding cards to your hand and hoping your opponent doesn’t pick up the cards you need.

With more players, you had even less control.  In some ways, that’s better – it promoted more aggressive playstyles, with cultists dropping less than perfect hands to at least not be caught with so many suits at the end-game.  But faster didn’t necessarily mean better – in most cases people simply had less ability to make big plays and get that satisfying feeling of dropping a big pile of cards.  It was mostly just damage mitigation.

Jess: The bottom line is Pocket Madness is, just, well, fine.  It’s not broken or bad or boring (though long runs of ‘draw 3 cards, draw 3 more cards, draw…uh…2 cards’ aren’t great).  It’s serviceable.  I guess I just went in with really high hopes, given its pedigree.

Andrew: Same here.  I wanted to love it.  When Bruno himself showed it to me, I was really excited to get it to the table.  The presentation is really good, the art is fantastic, heck, even the box size made me want to love it – not an inch of wasted space.  But ultimately, we only sorta liked it.

Pocket Madness is a game that will appeal if you’re into very light-weight games with minimal interaction.  Rummy fans will definitely see something to like here, and it might even be easy enough to teach and play as to use it to get non-hobby gamers to try something a little different.  And heck, for its price-point and physical size, it’s hardly a burdensome addition to any collection.  For those looking for a little more bite, though, it may leave you a bit wanting.