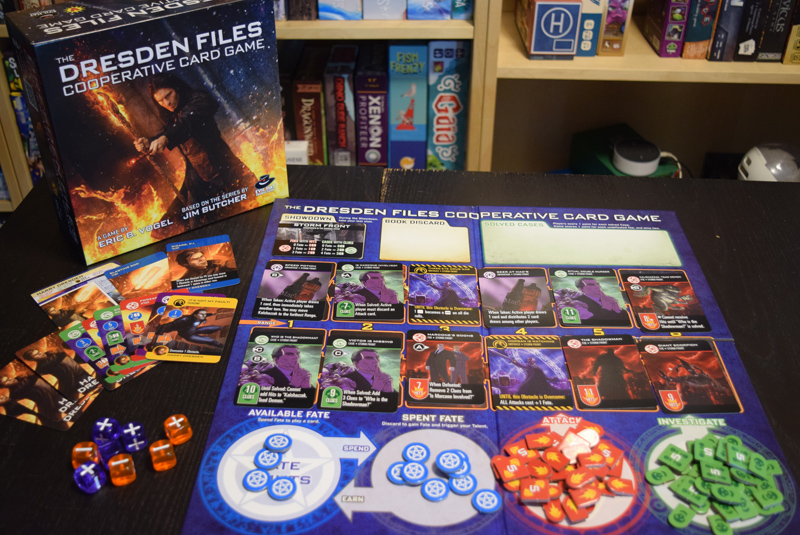 The Dresden Files Cooperative Card Game is a tough co-op take on the titular book-series-turned-game.  While it does a good job translating many of the characters and plots from the book universe into game form, its difficulty curve and oddly simplistic mechanisms make it a 'your mileage may vary' situation.

We’ve said it before, but games based on existing properties make us a little nervous.  Often, the folks who own a popular IP may not be game designers, and there has been plenty of precedent for games being designed either by non-designers or designers who didn’t really know the base IP causing, ahem, sub-par products to appear in the market.  And the more strongly we appreciate the source material, the more nervous it makes us.

Jess:  Basically, we’re huge Jim Butcher fans and we didn’t want The Dresden Files Cooperative Card Game to be a pile of regret.

Rob:  If you call getting your face kicked in by insurmountable odds ‘fun’.

Andrew:  Any Dresden Files fan knows getting your face kicked in by insurmountable odds is incredibly thematic for that world. 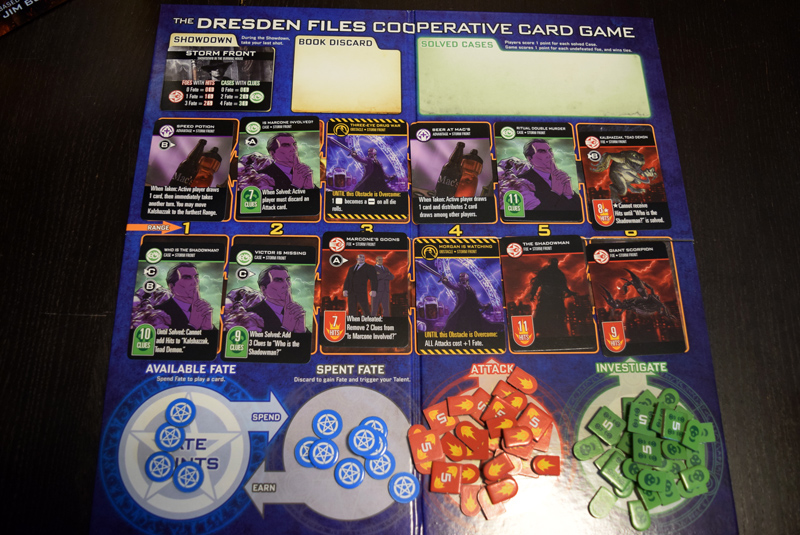 We’re getting ahead of ourselves, as usual.  For the unfamiliar, The Dresden Files is an urban fantasy novel series, written by Jim Butcher, set in a modern-day Chicago.  The titular Harry Dresden is a wizard who, along with a cadre of other supernatural folks, are frequently pitted against otherwordly foes and the diabolical machinations of enemies, both mundane and magical, all bent on destroying/enslaving/resetting the world.  Look, I’m not selling the series well, but if you like urban fantasy as a genre, we highly recommend checking it out.

The Dresden Files Cooperative Card Game was successfully Kickstarted last year, and it is, as it says on the tin*, a card game in the cooperative model where players each take on a character from Butcher’s Dresden Files universe and try to overcome the plots and foes from each of the books in the series.  Each character has their own unique deck, as do the antagonists (the ‘book’ decks), and all players will work together to overcome the challenges of a given book’s plot. 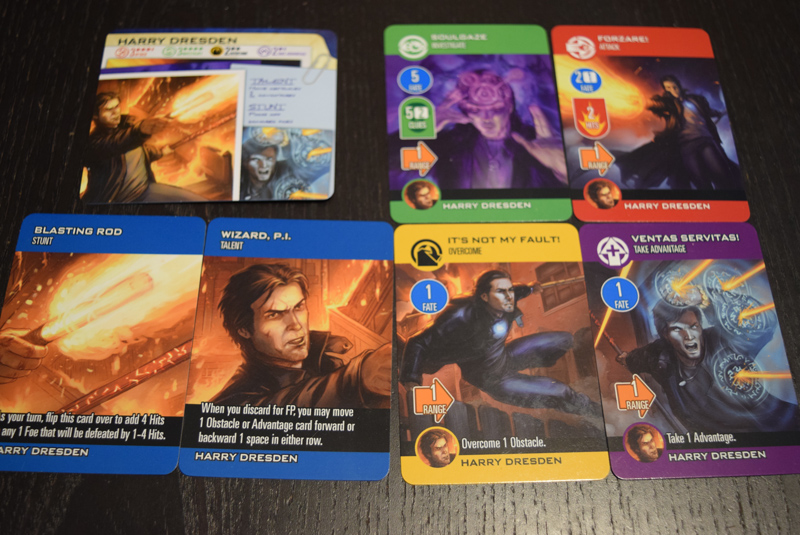 Kickstarter backers may have a pile of extra characters/books, but the retail version of the game still comes with a good variety.

Andrew:  The way it works is that each Book deck (the retail version comes with 5, I believe) has several different kinds of cards, and each player deck has cards built to overcome them:

The Book deck is shuffled and dealt out onto the game board, each player shuffles their personal character deck and draws an opening hand, and then we get to taking turns.  On each turn, players will nearly always play cards, either for their effect or to add points to the shared Fate pool, the communal pile of points needed to activate card effects.

The core of each turn is trying to resolve cards from the board – enemies get fought, cases get solved, and obstacles are overcome.  Frequently, cards are either affected or will affect each other, possibly dramatically shifting the balance of the game or forcing you to resolve certain cards before tackling others.  Group coordination is key – working at cross-purposes with your team will inevitably end in failure. 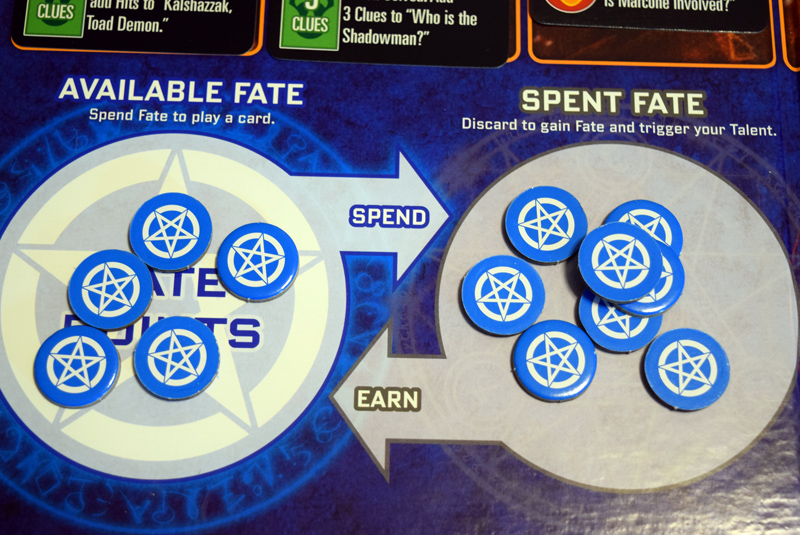 The goal of The Dresden Files Cooperative Card Game is, perhaps a little oddly, to score more points than the game.  There’s no event deck to work through or final villain to face off against.  Once one of the end-game conditions is triggered (more on that in a bit), players compare only one vital set of information – did the players, as a group, solve more Case cards than there are Foe cards still on the board?  If so, the players collectively win – Harry and his allies manage to (often just barely) avert disaster and come out on top.  If not (including ties), well, I guess humanity had a good run.  Shuffle those decks, deal out a new set, maybe swap out some characters, and give it another shot.

Jess:  What’s important to understand about The Dresden Files Cooperative Card Game is that it’s a game all about managing an incredibly limited pool of resources.  Fate points power all card effects, but we share a limited pool which we can only replenish by discarding cards instead of playing them.

Diana:  Right! And to make matters worse, there are no standard ‘draw’ mechanisms in the game.  The cards you start with are often the only cards you’ll have for the whole game!

Rob:  Which, of course, makes every play a painful, strategic decision.  Do I play this powerful Attack card to grind down a foe?  Or do I toss it for Fate, hopefully giving my fellow players more options?

Andrew:  And complicating all that is the fact that each player can only obliquely communicate about the contents of their hand – “I’m well-set to handle Case cards right now”, rather than “I can add 4 Clue tokens to that card as long as I have 3 Fate points to spend.”

Jess:  It can be painful, yeah, but I totally get why its there.  It really does add a lot of tension and challenge, with little mechanical impact. 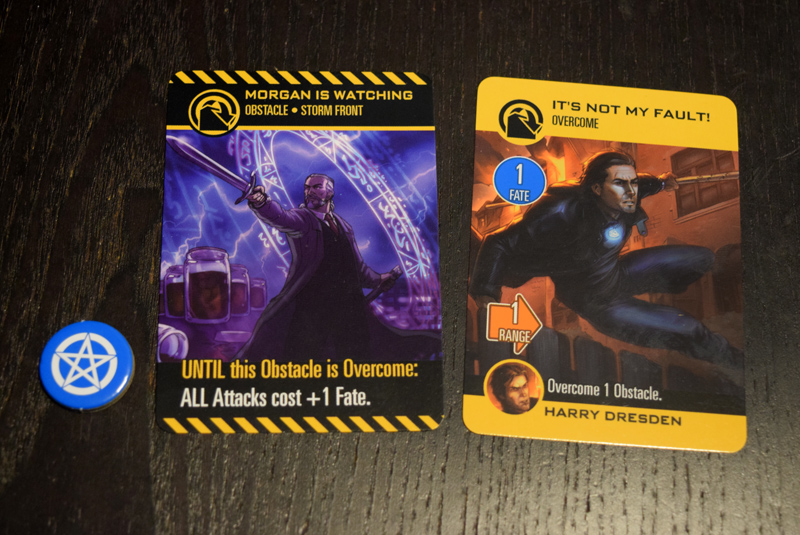 The Dresden Files Cooperative Card Game is, as you may have gathered, a tough game.  We’ve played it a bunch of times and, to be honest, have only won once.  And while that in no way diminishes our ability to enjoy it, it means it won’t be for some people…

Jess:  So the difficulty curve is a ‘your mileage may vary’ kinda thing.  You’ll either enjoy it or you won’t.  But I thought there were other things to appreciate.

Diana:   I agree!  I liked the way they translated characters and plot elements into cards.  Each character deck feels fairly unique, with certain characters, like Harry, being awesome at blasting away, while Murphy is way better at investigating.

Rob:  Yeah, I’m on board with that.  I also liked how, in addition to unique decks, each character has a couple of unique innate abilities, most of which are really powerful.  But on the other hand, I’ve experienced a few times where I had nothing to contribute to the group beyond pitching a card to refill the Fate pool, sometimes several turns in a row, and that feels really lame.

Andrew:  I do see your point.  Sometimes it definitely happens that you have a monster card that will be a great play…but you’ll just drain the Fate pool and crash the next players’ turns.  And since one of the game-over conditions is when you need Fate and don’t have it, playing selfishly is almost always going to end in disaster…but sometimes altruism can feel disempowering. 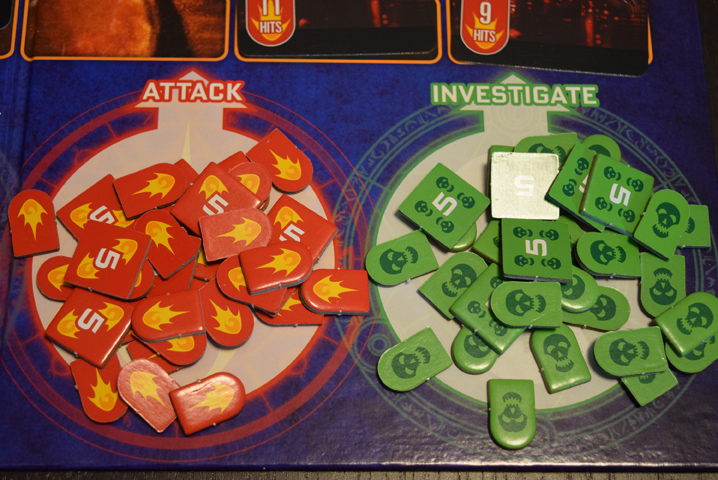 The end-game of The Dresden Files Cooperative Card Game happens all at once, and sometimes arrives unexpectedly.  The end is triggered when a) a player runs out of cards and the Fate pool is empty (it costs a Fate to pass), b) a player plays a card with a variable cost and that cost ends up exceeding the Fate pool, or c) all players agree that the endgame should occur.  As soon as one of the conditions are met, the game immediately comes to a crashing halt, ending in a phase called the Showdown. 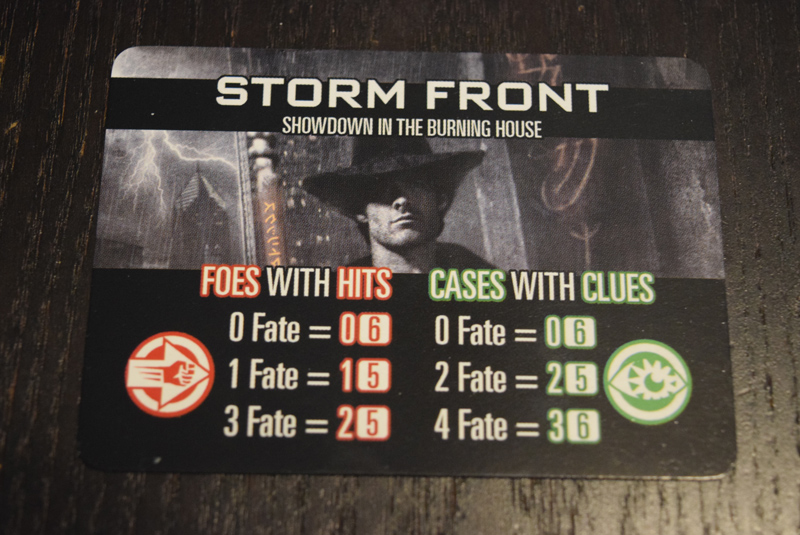 The Showdown is a last-ditch attempt to resolve any Foe/Case cards still on the table.  For each one the group has started working on, the players can roll some dice and/or spend some Fate points to complete/defeat as many cards as they can manage.  Then solved Cases are compared to remaining Foes, and you either win or lose together.

Rob:  The dice leave something to be desired.

Andrew:  Well, they’re a hold-over from the whole Fate roleplaying system that inspired the game, I believe.

The dice in The Dresden Files Cooperative Card Game are 6-siders.  2 sides are blank, 2 are positive, and 2 are negative.  These dice are frequently rolled to determine variables for card effects (damage done, investigation tokens added, Fate costs, etc.) and either increase or decrease the net result based on their face. 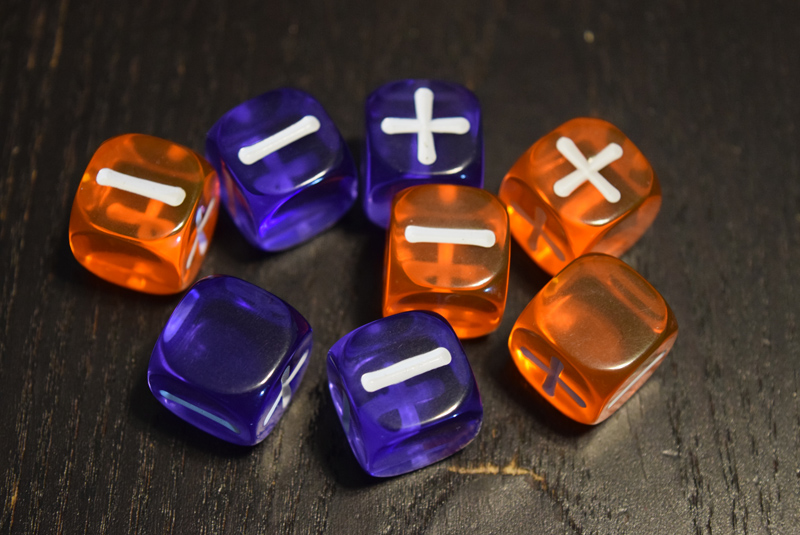 Now this can be a tremendous boon when all goes well, with a card potentially getting cheaper or an attack dealing big damage at a low cost, but they are just as likely to completely screw you, arbitrarily increasing the cost of a card or knocking the teeth out of an attempted investigation.

Diana:  Yeah, it’s never fun to roll badly and have your already-difficult challenge ramped up to ‘impossible’.  And a bad roll on a Fate cost can end the game all at once under certain circumstances, so there’s that to consider.

Overall, we are fairly all over the place on The Dresden Files Cooperative Card Game.

Andrew:  I loved it.  But I love tough-as-nails co-ops and don’t mind its tight, often unfair difficulty curve.  It’s mechanisms were surprisingly simple, and I didn’t mind its percussive end-game.  Or the losing.

Jess:  I enjoyed it, and I especially liked how they worked to make different character decks behave differently, and seeing key characters and moments from the books turned into card effects.

Diana:  I liked it for those reasons too, but I have to say the difficulty was hard to swallow, and the mechanisms were surprisingly simple, and not always in the best way – like Rob said, sometimes there wasn’t much you could do with your turn, aside from squirrel away some Fate points.

Rob:  That’s my big complaint.  I’m normally happy to ‘play the cleric’, as it were, but losing several turns in a row to simply charge the Fate pool left me feeling unsatisfied, and nothing sucks quite as much as losing a tie score to the game board.  Overall, this one was fine, but not great.

The last big thing to note is that, as Dresden Files fans, we certainly had a fine appreciation for all the characters and set-piece cards – something which non-fans will completely miss.  Why is the dog named Mouse?  What’s an Amoracchius?  Waldo Butters?  Will you enjoy the game if you don’t know the source material?  Maybe – it will depend even more on how you feel about tough co-ops if your experience isn’t bolstered by being a fan.

So there you have it – a team divided.  None of us disliked The Dresden Files Cooperative Card Game, but our opinion on it is pretty diverse, despite being overall positive.  So we can only highly recommend it for either the sorts of people who like co-op games like Pandemic and Hanabi, or the folks who just adore the Dresden Files universe and can’t wait to spend some time playing there.

(Gameosity received an advanced copy of this game for review, despite also having Kickstarted it.  We were not otherwise compensated.)