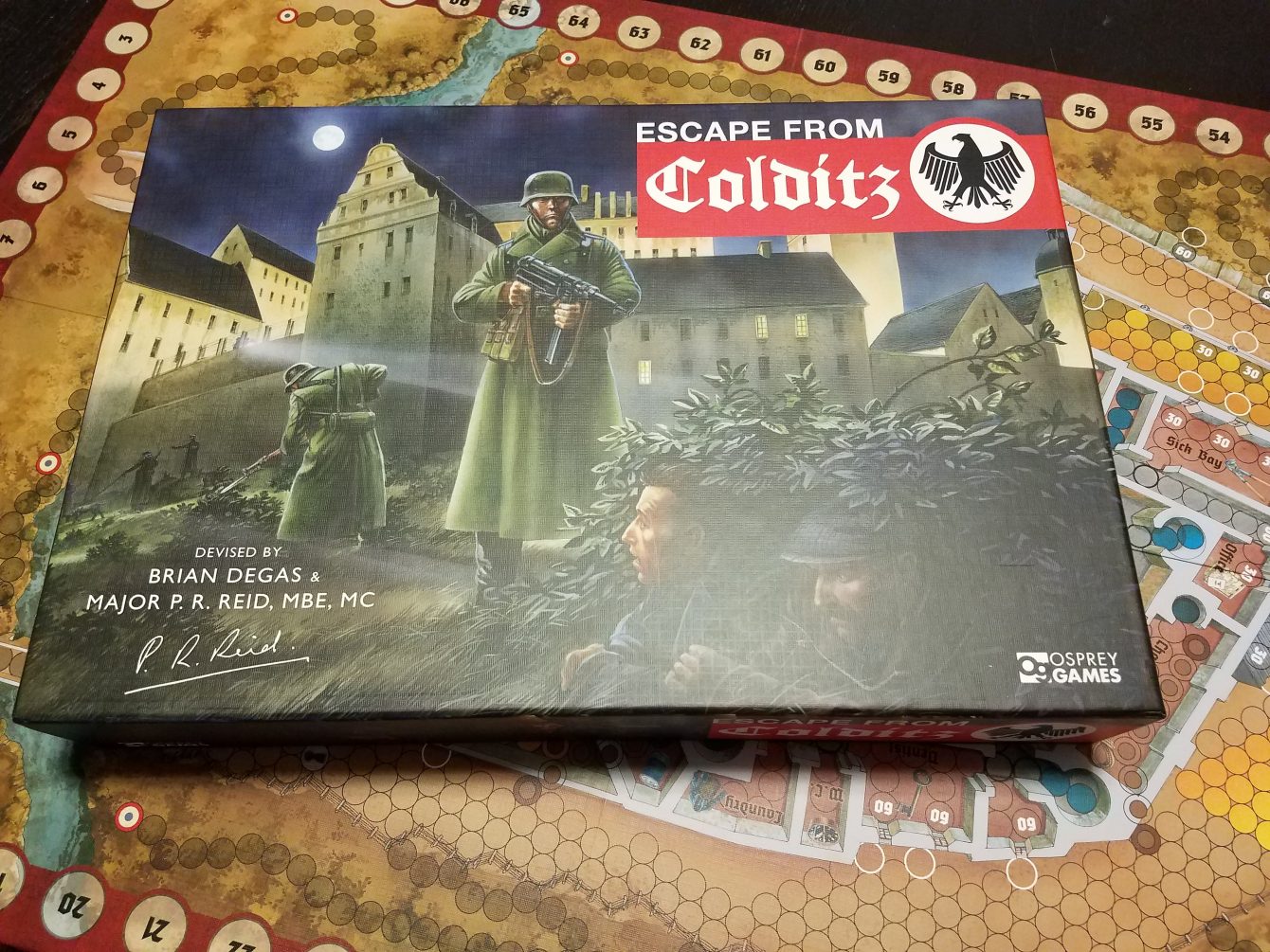 Escape from Colditz is a piece of board game history that has, for the most part, held up well (especially with the updated rules in this edition).  However, it is still an old-school game at heart, and it shows its age with some of its mechanics and tough-as-nails potential difficulty

Prison break stories are genre unto themselves.  Be they a band of prisoners of war, working to free themselves and return to their countrymen, or a pack of morally-ambiguous thieves breaking out to do just one more heist, there is something thrilling about the cat-and-mouse stories of classic prison break films like The Great Escape (not to mention the real-world feats which inspire those tales).  Escape from Colditz is a game that tries to (ironically) capture those daring acts of mad bravery, as it pits a German security officer against a group of allied escape officers in the very real setting of Colditz Castle.

As a remake of a classic from the annals of gaming history, the modern incarnation of Escape from Colditz is, in some ways, a relic of a bygone era.  Designed in an age where things like roll and move were commonplace mechanics (as opposed to now, when they are often seen as dated at best), Escape from Colditz nevertheless did some pretty interesting things with its design.

Devir, with the blessing of the original designers, has re-engineered Escape from Colditz, making efforts to update it for modern gaming sensibilities without gutting it of its core gameplay concepts, and this new version has been gorgeously published in the US by Osprey Games.  Was this update successful?  Let’s dive a little deeper and discuss. 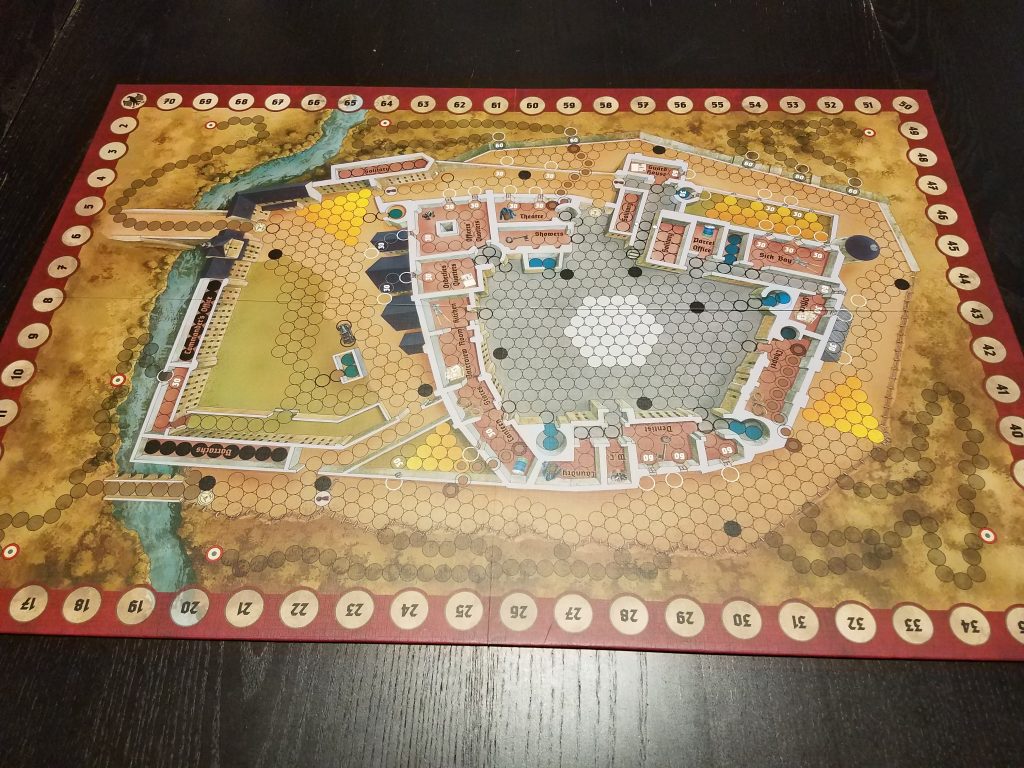 Escape from Colditz is, as its title implies, a prison break game.  Set in a POW camp, one player will assume the role of the facility guards, whose job is to maintain control over the camp for the duration of the game.  The rest of the players will control factions of prisoners of war, all looking to make their big escape.

Over the course of the game, the prisoner players will move their POWs around the board, trying to pick up the tools necessary to break out of the prison.  By gathering supplies, disguises, and tools, and by evading guards and digging tunnels, the POW players attempt to slip past the camp’s defenses and break for it, winning if they can collectively manage to get at least two of their pawns away safely.

On the other side is the security officer, whose job it is to contain the POWs for the duration of the game.  By controlling the guards and strategically patrolling, this player will work to stymie the escape efforts of the rest, winning through attrition, so long as they are able to keep control of the camp until a certain number of rounds passes.

Jess:  So, right off the bat, we should be clear – we’re pretty divided onEscape from Colditz.

Andrew:  I don’t even know if I could say divided.  Seems like it generally wasn’t our kinda game. 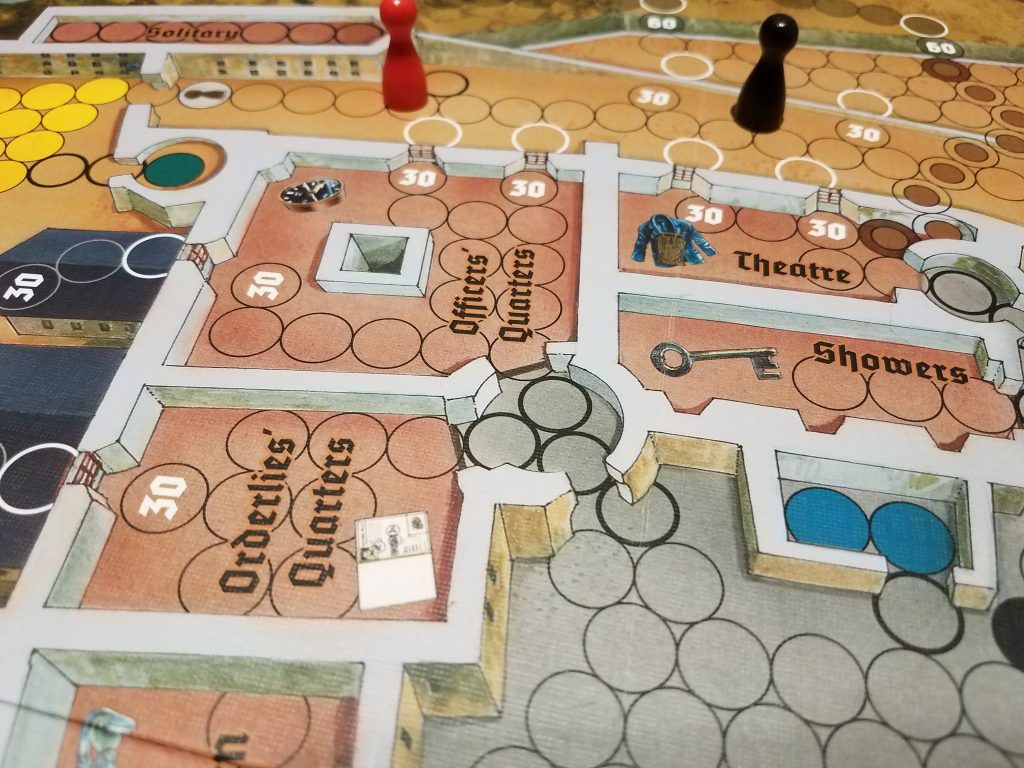 Each room provides some opportunity to gear up for your escape.

Josh:  But you have some good things to say about it.

Andrew:  Indeed I do.  But since I’m the minority here, let’s go over what you guys found problematic.

Jess:  Well, the aesthetics, for one thing.  Looking at the board, it just felt…old, somehow.  Don’t get me wrong, some of what went into the box was amazing – the historical documents, the boxes for the cards and components, all the little extras really added to the theme.  But ultimately, it was a huge board with a bubble grid that recalls the days of board game past somehow.  But not in my favorite way.

Josh:  I didn’t have as much of an issue with aesthetics, but Jess and I both found ourselves struggling a bit with the mechanics.  First of all, rolling for movement is now considered a fairly outdated concept, and the reason why is pretty well illustrated here – there were plenty of turns where we just didn’t quite roll enough movement to get done what we needed to, so we had to hang out and idle a bit before being able to resume our escape attempts. 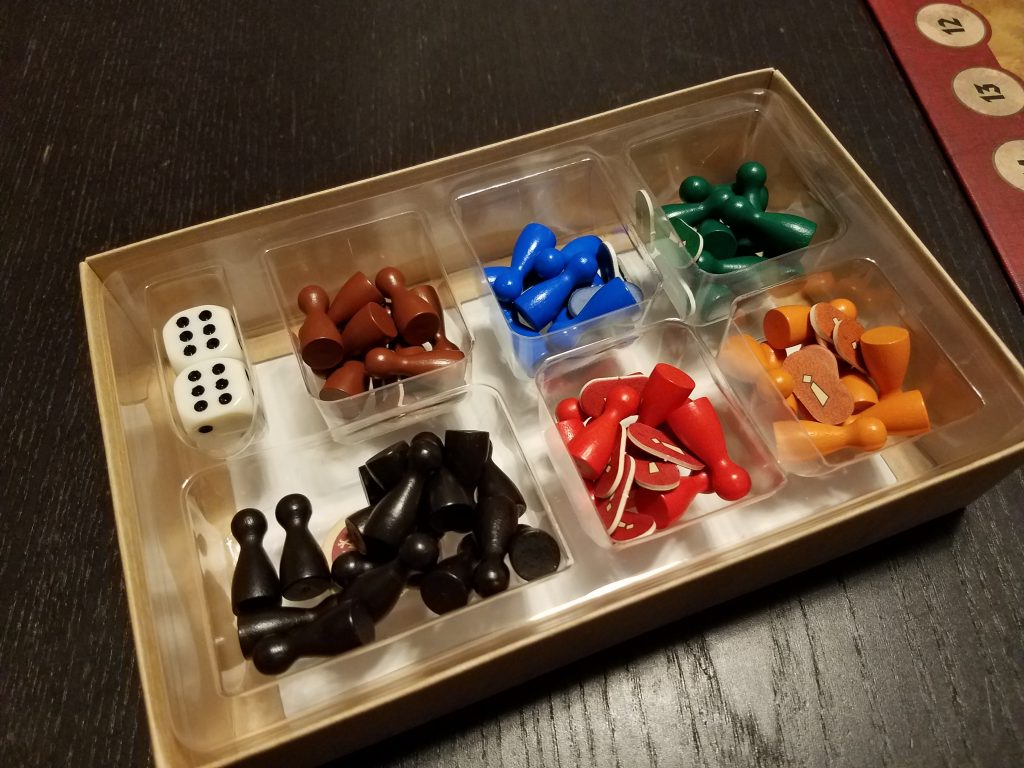 Jess:  Yeah.  And while it is true that you get to draw a card if you roll below a 5, and cards are almost always useful, it doesn’t always make up for not getting much done in a round.  And of course, rolling a 6 makes you want to scream.  There’s also the game length.  The book recommends 50 rounds for new players.  50 rounds! 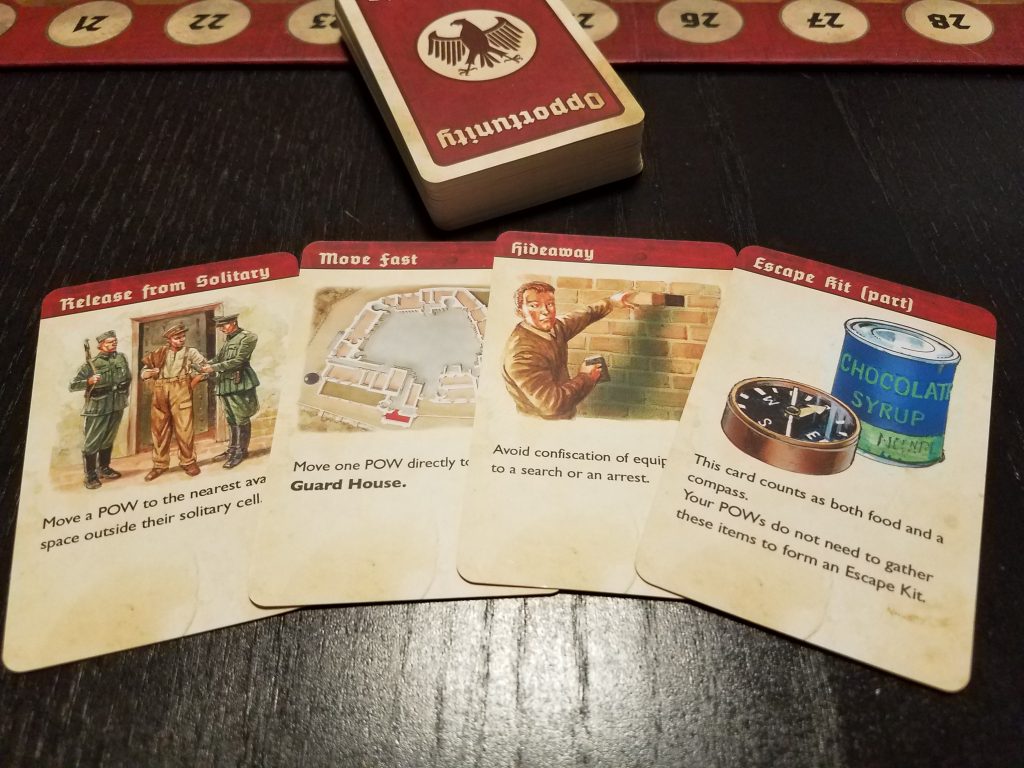 Josh:  Admittedly, each round can be really fast (especially if you roll low on movement) and there aren’t many mechanics which slow down the flow of the game, still, it did feel about 20% too long.  And while you could certainly lower the number of rounds as you wish, that only makes the POW players’ work all the more difficult. 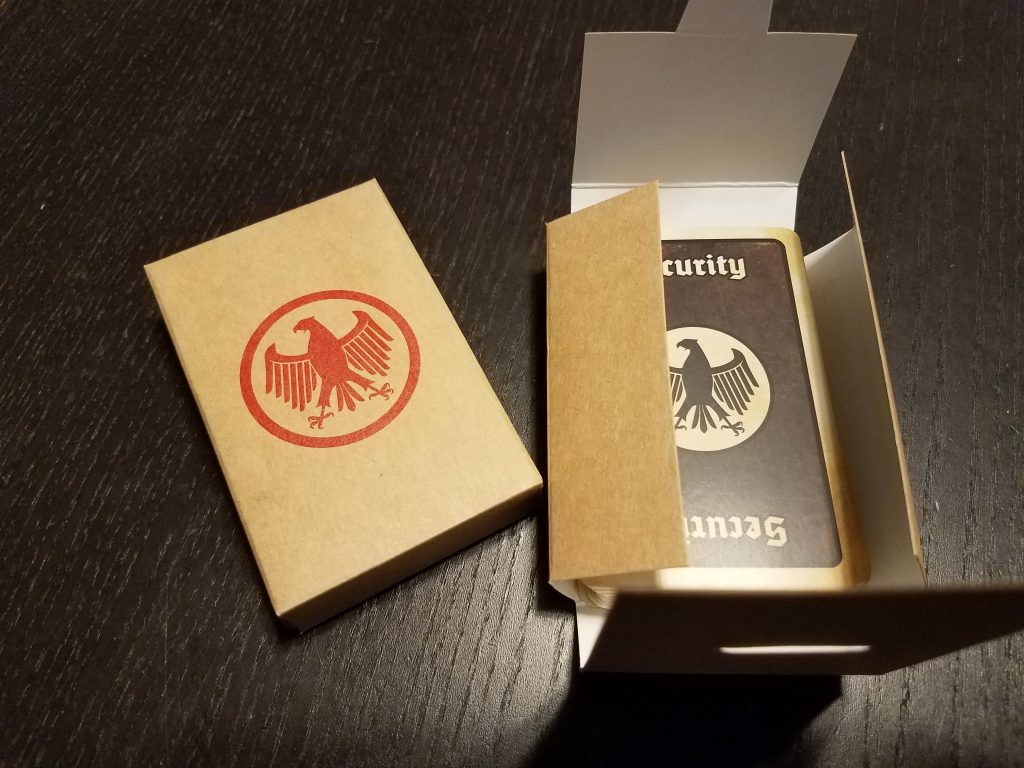 Jess:  But most of all, my problem with the game (playing as the POWs, mind you) was the hopelessness of it all.  I don’t know if it was because the security officer player was always really on their game in our plays, but the POWs never won, and worse, I never felt like we particularly had a chance.

Josh:  Yeah, I found it frustrating that way, and that was with the POW players having all agreed to play 100% cooperatively – I can’t even imagine how it would be if we were also working at odds with each other.

Andrew:  Well, for starters, I agree with a lot of the points you raise.  But what seems to have been an exclusively negative experience for you two wasn’t so one-sided for me.

First, I actually really appreciated the aesthetic presentation.  From the board to the bits, the simplicity of their appearance felt entirely appropriate to the subject.  Detailed miniatures and a more realistic map would only have detracted from my ability to take it seriously, I think.  Instead, what we have is a stark, functional, dispassionate representation of something truly horrible, and that lends a gravity which would otherwise be missing if it were more fantastically presented. 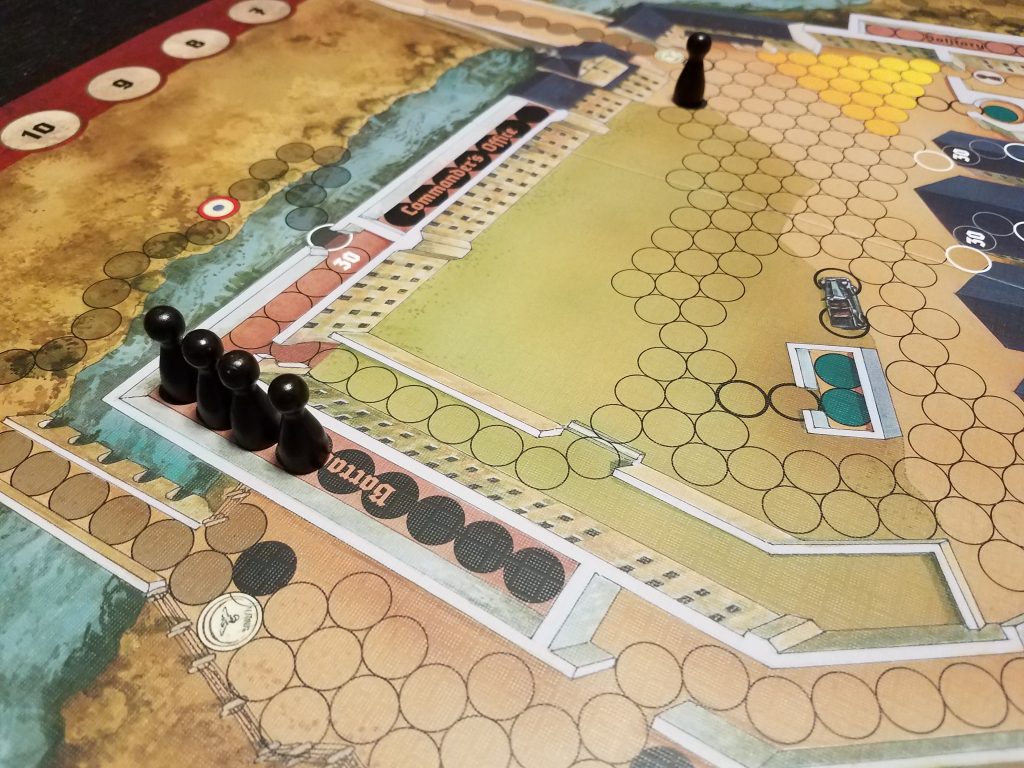 But to your points about mechanisms, I agree that the roll & move core of the game can be incredibly frustrating.  Getting a piece caught out in the open because you simply didn’t have enough movement to get clear of a corridor is irksome, but for me, that’s where the strategy lies.

You roll your dice, get your movement points, then figure out what you can do in a turn.  Sure, there were turns spent simply moving from bolt-hole to bolt-hole (for the POWs) or making tragically slow progress in patrolling even though you know a prisoner is ahead of you (for the guards), but that all adds to the best thing aboutEscape from Colditz – theme penetration. 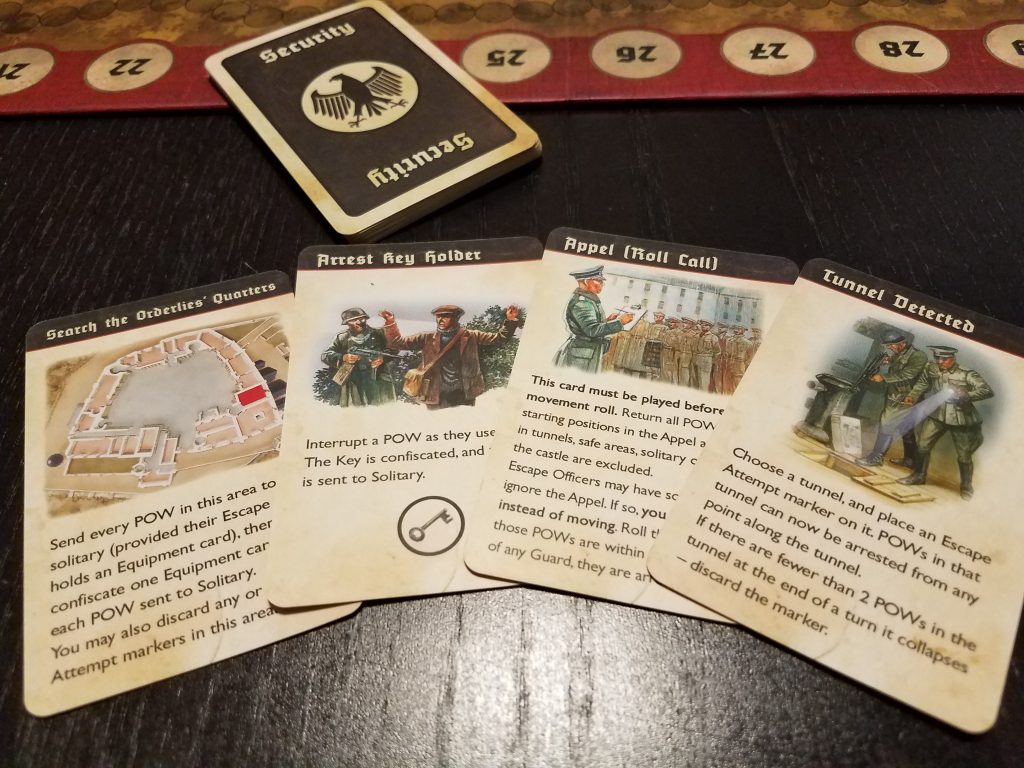 Because, yes, it does feel hopeless.  The POWs are in a bad spot, and all the guards have to do is run the clock in order to win.  That being the case, each small victory, whether its getting some tools to bypass a locked door, having a POW tackle a guard to force that guard to arrest him, only to have another POW sneak down the now-empty corridor, or simply evading a guard in the nick of time, feels great.  Even the roll to move mechanic is actually thematic – you never feel quite safe or in control here, and I can just imagine as prisoners figure out they need to get to the canteen, only to realize they won’t make it there before the guard patrol comes by; that’s good stuff!

From the guard player’s perspective, you have all the advantages to start with, but soon POWs will start bypassing locks and digging tunnels, and then this rather fantastic game of cat and mouse emerges – I know you have contraband, but I can’t arrest you unless I catch you in an area where you shouldn’t be.  And you know I’m going to try and uncover that tunnel you’re digging, so you’re going to abandon it as soon as you can get a man or two through.  And the thrill of panic the guard feels when a POW gets a huge movement roll and then suddenly makes a break for it can be absolutely a blast – as long as it isn’t also absolutely maddening, as you roll a 6 or 7 and your guards stumble along, randomly unable to keep up.

We all see the board, and there is precious little hidden information.  Instead of keeping pieces behind player screens (a much more acceptable practice in modern games), Escape from Colditz puts it all out there, leaving players to stare at each other from across this huge board and smile nakedly as we square off, all the lies in clear view.  It’s not a bluffing game by any stretch, but the mind game can be strong in Escape from Colditz, and that surprised me.

Andrew:  I appreciate it.  I can even recommend it for players who know what they are getting into.  But like it?  I’m honestly not even sure.

Escape from Colditz does what it does very well.  For an update of an older, classic game, it succeeds in both showing its roots and bringing some new sensibilities to the table.  It even comes with the original rules, for those who wish to experience it as it was designed.  Its current presentation is lovely, for a stark measure of loveliness, and it is clear that this anniversary edition is a meaningful tribute to the original.

One thought on “Escape from Colditz Review”