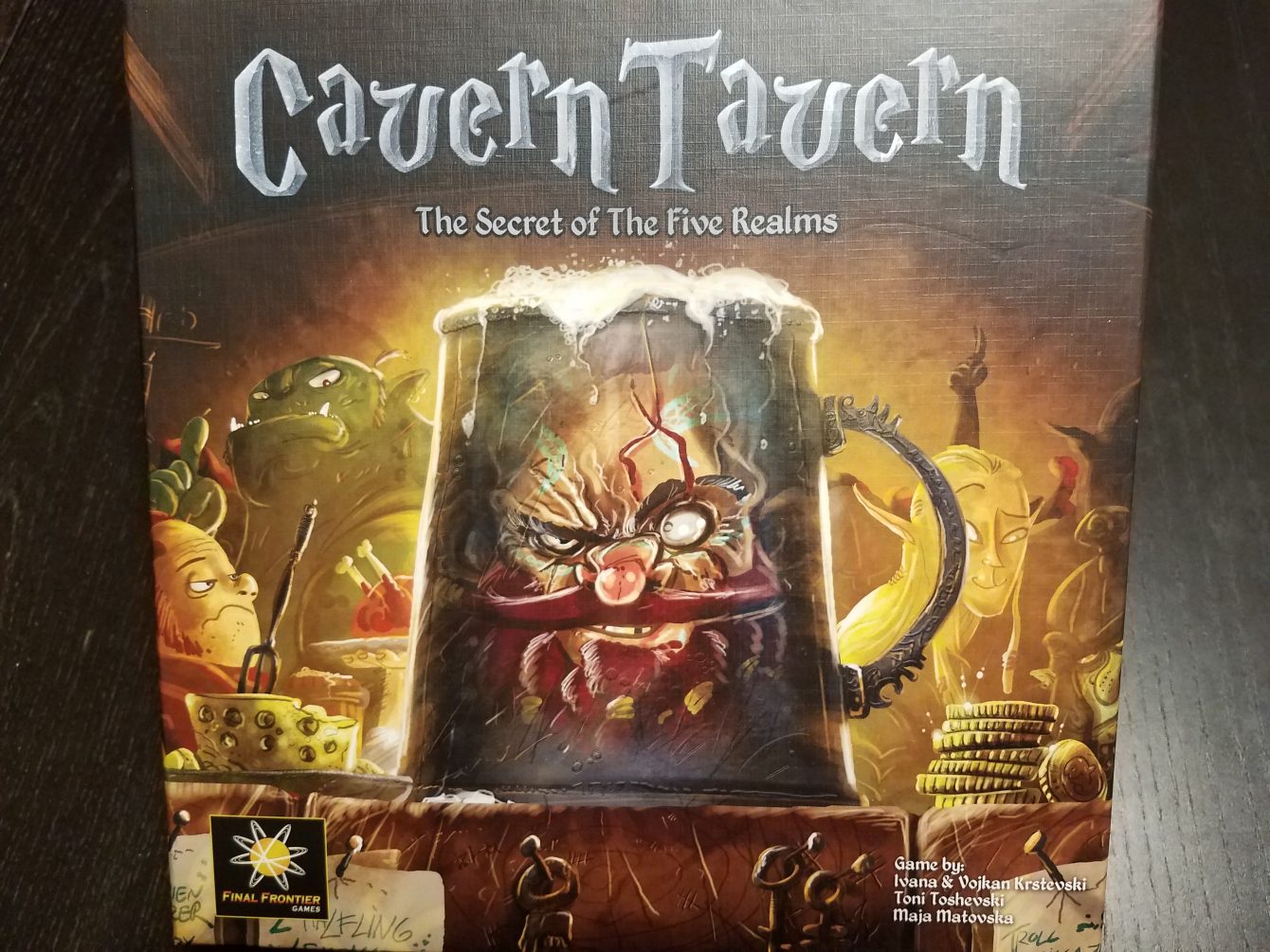 Cavern Tavern is a gorgeous game of dice placement and set completion that will have you slinging drinks all night.  Though very luck-driven and a bit tight (you won't complete nearly as many drink orders as you'd like), Cavern Tavern is still a good, if sometimes slightly frustrating, time.

As any roleplayer knows, the tavern is one of the most iconic parts of any adventurer’s journey.  After the sword-swinging and spell-slinging is done, once the demon horde has been vanquished and the wayward royalty returned to the throne, there isn’t an adventurer alive (or recently resurrected) who doesn’t want to head down to the tavern, order up a tankard of grog, and regale the peasantry with tales of bravery, daring, and danger.

I mean, after all, it’s not like the grog is going to pour itself!

Cavern Tavern is a dice placement, set collection game for 1-4 players (yay solo options!).  In it, each player is an employee of Nasty the Dwarf, proprietor of the titular Tavern.  Despite the fact that we all work for the same individual (whose temperament can’t possibly have inspired his nickname), players will compete for favor and coin, each seeking to accrue the most points by last call.

Jess:  It’s every demihuman for themselves in Cavern Tavern – servers are responsible for grabbing ingredients for their orders from the pantry, helping out in the kitchen to curry favor with the chefs, and completing chores in order to improve their standing with the restaurant staff.

Andrew:  And of course, the patrons keep coming in, demanding bizarre concoctions of spirits, ales, spices, and brews.

Each round, the tavern will fill with patrons, each looking to get blitzed from their particular order.  Every player can work on a single drink order at a time, using their dice to try to secure the ingredients needed to fill these orders.

And since no one wants to wait for a drink (even those bloody immortal elves, like, what else are they going to do with their time?), every round that goes by without an order being filled makes that order worth fewer and fewer points.  Wait too long and customers will simply walk out, subtracting points from your total.

Andrew:  And worst of all, there is Nasty, that omnipresent threat.  Each player has a Nasty track alongside their Kitchen and Chore tracks.  While you want to advance in those other two (making those activities worth more and more points), every time you foul up or simply have an open drink order at the end of the round, Nasty will give you an earful.

Jess:  Once you cross certain thresholds on the Nasty track, you’ll get pulled into his office, where he will unceremoniously chew you out, and likely give you some form of punishment in the form of a Nasty Says card.  And they all suck.

Cavern Tavern is played out over the course of 10 rounds.  Players will use the round tracker in order to not only check the overall progress of the game, but also to keep track of how long they have been working on a given drink order.  Once the 10th round is up, players will check their scores, gain some bonuses from secret objective cards and left-over ingredients, and then a winner gets declared.

Andrew:  I liked Cavern Tavern a lot.  I’m a sucker for dice placement, sure, but I also like that there are multiple ways of spending your dice – if someone blocks you in a particular area, sometimes you can get what you need by spending a different combination in another part of the tavern.

Jess:  Yeah!  And I also liked the whole Chore and Kitchen track ideas – work hard enough in those areas and you can earn some serious bonus points.  Still, I did feel like the game was somehow too tight. 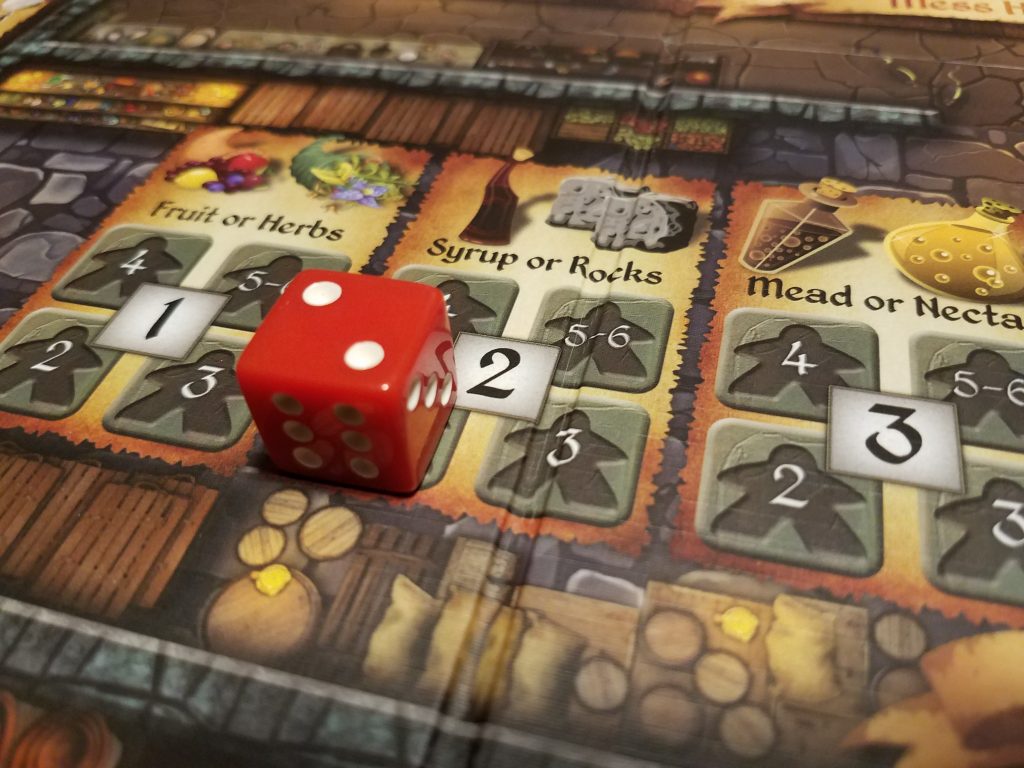 Andrew:  I know what you mean.  A bad roll can mean no real way of working on your drink order, and every turn you have an open drink order means less points when that order is filled and moving along the Nasty track, which can really screw you up, depending on the Nasty Says cards you might draw.

Jess:  None of that is a deal-breaker for me; I liked Cavern Tavern too.  I just wish there had been more time or opportunity to do the thing we were there to do – I was really surprised that we tend to only make a handful of drinks over the course of the game!

Andrew:  Yeah, true.  For a game that is all about serving drinks, we sure didn’t, you know, serve many drinks overall.  One a round is nearly peak efficiency, and I don’t even see how that is possible.  Nearly every patron who walks in is going to either get their drinks late or not at all.

Jess:  Maybe that’s why Nasty is so, well, nasty?  But on the other hand, the place is packed every night, so there’s no sense complaining.

The fun bits of Cavern Tavern, getting the right dice to take the right actions to get the right ingredients to score big points, are extremely fun.  And when it all lines up and you’re lucky enough to get exactly what you need when you need it, Cavern Tavern gives that same thrill of completing objectives that makes a game like Lords of Waterdeep so satisfying.

Of course, when the dice are against you and you’re just watching a drink order rot and Nasty get pissed with you, well, that’s less fun.

Jess:  Now, the good news is that there is an in-box expansion which mitigates some of your potential bad luck (as well as kicking ol’Nasty around, too), in the form of the Secret Chamber.

Andrew:  You mean where the Basilisk resides?

Jess:  While I always appreciate a good Harry Potter reference, I wouldn’t dare go around calling Mrs. Nasty a basilisk.

The Secret Chamber expansion adds an extra place for players to spend their errant dice.  By fulfilling Mrs. Nasty’s requests, you will gain not only ingredients and other bonuses, but those tasks become unique dice placement spaces which you will add to your player area, effectively becoming new options which you (and only you) can perform on future rounds.  Additionally, Mrs. Nasty gives you tokens which can manipulate the values of your dice, as well as tokens to nullify the wrath of Nasty.

Andrew:  Overall, I think that the Secret Chamber expansion adds some much needed options to Cavern Tavern, and I think it should be used all the time.

Jess:  Agreed!  By giving you even just one or two more ways of spending your dice, it adds a lot of value.  Sure, it still sucks to see turns tick by and the value of your drink orders tank, but the Secret Chamber makes it more likely you’ll be able to complete them on time.

Cavern Tavern also features variable player powers, as well as a solo mode that we haven’t tried.  On the whole, there is plenty of game in the box, and with the exception of wishing we could just get more drinks served (since that’s where the points and fun are), we think Cavern Tavern is a really enjoyable, attractive, and playable game.