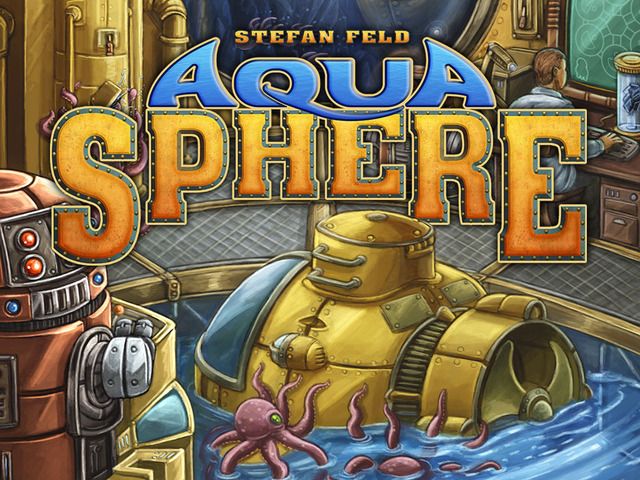 AquaSphere is heavier than it looks, shorter than it seems, and tighter than is comfortable.  While it wasn't to our taste, folks who enjoy thinkier, more planning-centric Euros may find some fun in its depths.

There’s something about a Stefan Feld game.  Considered, polished, and often truly unique, some of our favorite games, like Luna and the amazing Castles of Burgundy (easily among my top 10 games of all time), are from the Feld collection.  His games tend to be complex up front, often featuring if not an overwhelming number of choices, strong implications to your choices.  Feld games aren’t beginner’s games, though they are among the best.

Then along comes AquaSphere – all candy-bright colors and uniquely-themed, and it really tempts you in.  Players are researchers in an underwater base, conducting research while trying to fend off distracting octopods…. 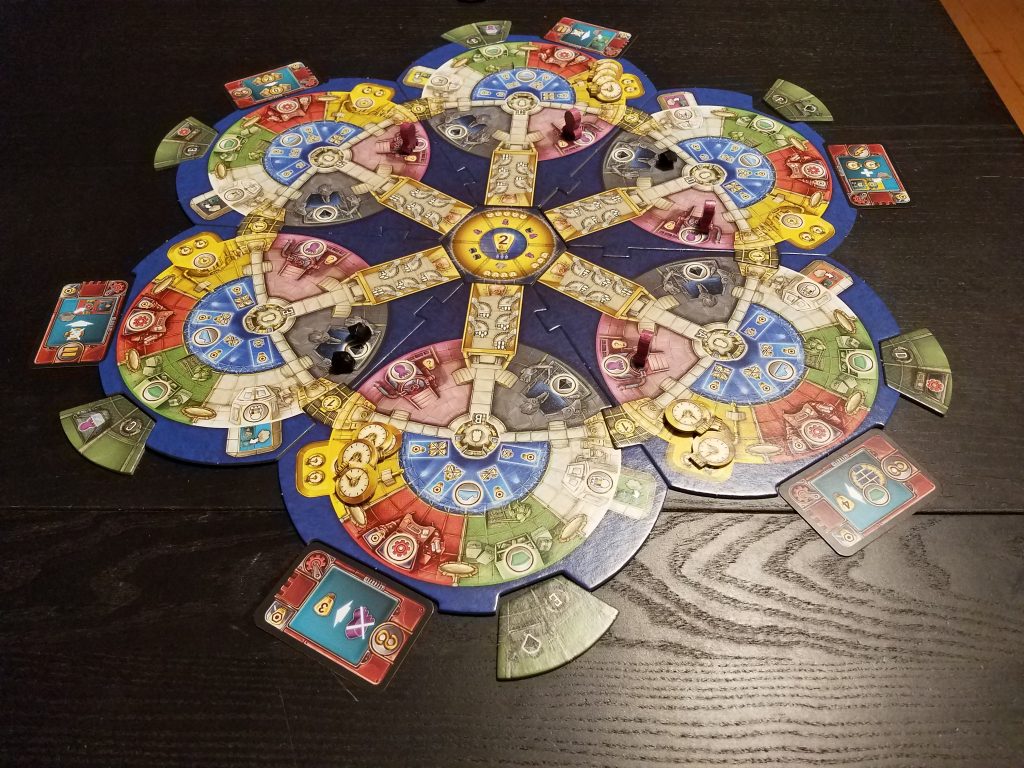 Andrew:  Well, actually, wait, players are engineers, coding and programming an army of robots to do their bidding.

Jess:  Hold on, no, players are building private research pods, carefully crafting it from segments that have different specializations.

Josh:  I thought I was responsible for deploying a fleet of submarines and gathering precious crystals.

Andrew:  It’s a Feld game!  We’re doing all those things!  At the same time!

Jess:  Holy cats, this game is going to drag on forever, then.

Josh:  ::Checks the rulebook::  We have exactly four rounds.

Andrew:  Strap in, kids.  This is going to be a short, bumpy, fun, complicated, and occasionally stressful ride. 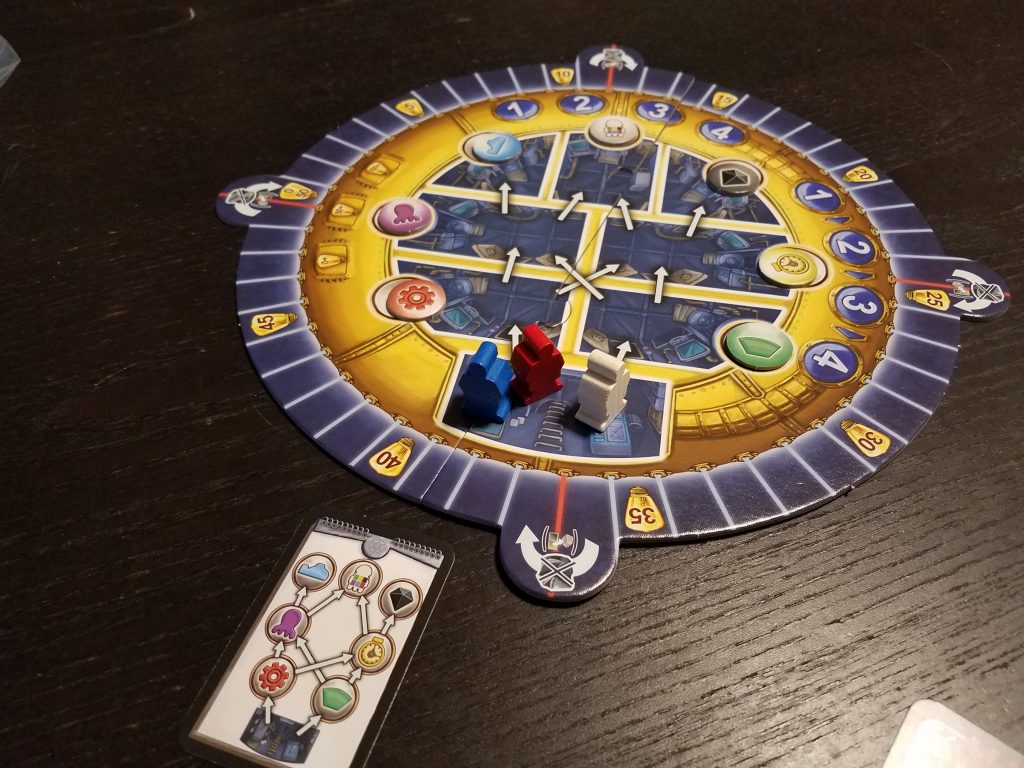 The basics of AquaSphere, if there can be said to be such a thing, are these:  Each player controls two main workers, each in a different part of the AquaSphere base.  During their turns, they will take a single action, moving these workers and activating robots (yes, there really is an army of robots) in order to execute different potential actions.  In order to take an action, a player must have an appropriately-programmed robot as well as a scientist in the sector of the base in which they want to act.

Josh:  Every action reflects a combination of all three of your player-controlled pieces working together.  In order to do anything, you will need to coordinate your moves such that you have what you need where you need it.

Andrew:  Right, and your scientist can move all over the base, but moving between sectors takes time, as represented by little time markers.  So you need to make sure that you have enough of that resource in order to get where you need to go. 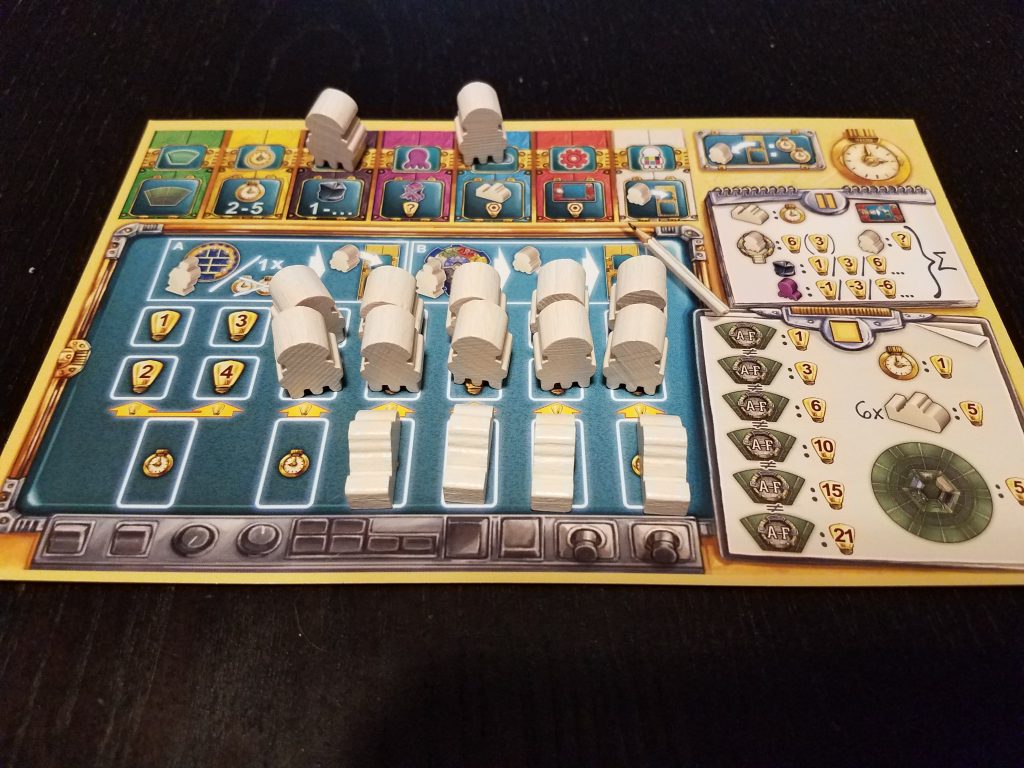 Between rounds, there is intermediate scoring, where players will earn points for basically everything.  Players gain time based on the number of subs deployed, and score points for deployed robots, area majority of robots controlling sectors, all appropriate technology cards, and crystals collected.

Josh:  You will also lose points based on how many octopods are present in sectors that you currently control.  I mean, no one likes a rogue octopod.

Jess:  And of course, you can only advance so far on the score track without needing to sacrifice crystals to bypass these barriers.  Which means it’s entirely possible to score a bunch of points on a round but not be able to actually earn them, because you are stuck behind one of the arbitrary scoring thresholds and don’t have a crystal to spend. 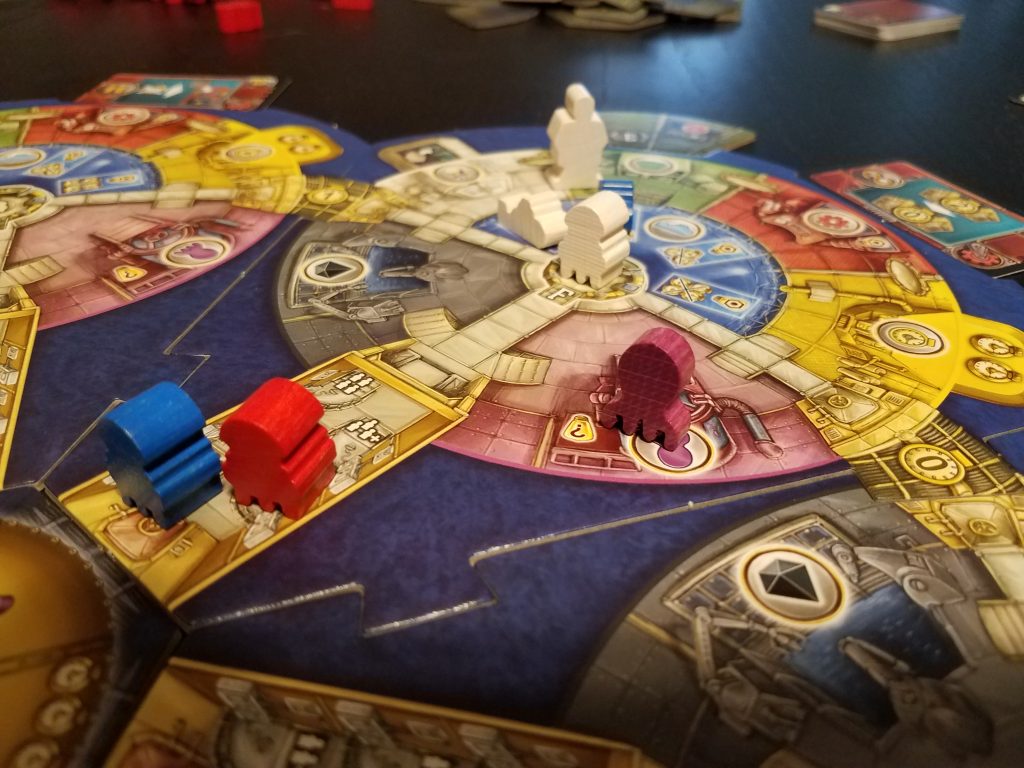 Andrew:  I didn’t entirely dislike AquaSphere, but by the depths, it was crunchy.  Probably too much so.

Jess:  Yeah, for real.  It wasn’t the tightest game I’ve ever played, since you can technically take actions as long as you have time and robots, but the whole ‘four round thing’ leaves me feeling like I’ll never get done all the things I want to do.

Josh:  And yet, I don’t know if it would benefit from being any longer, honestly.  With every turn, decisions got sticker and calculating optimal moves got tougher.  I think at six rounds, the game would be bogged down and unenjoyably long.

Andrew:  Agreed, though I felt that way from the very beginning – it’s not a game that forgives a bad first round, and while there are some very mild catch-up mechanisms in the form of the ‘gated’ scoreboard, it’s so easy to fall behind and stay behind.

Jess:  But not for long, of course.  Because the game’s over.

Andrew:  And I do hate that gated scoring thing.  Hard enough to get the points in the first place!  Well, maybe not hard to get them, but it feels super lame to lose them for no real reason.

Josh:  Aside from poor planning. 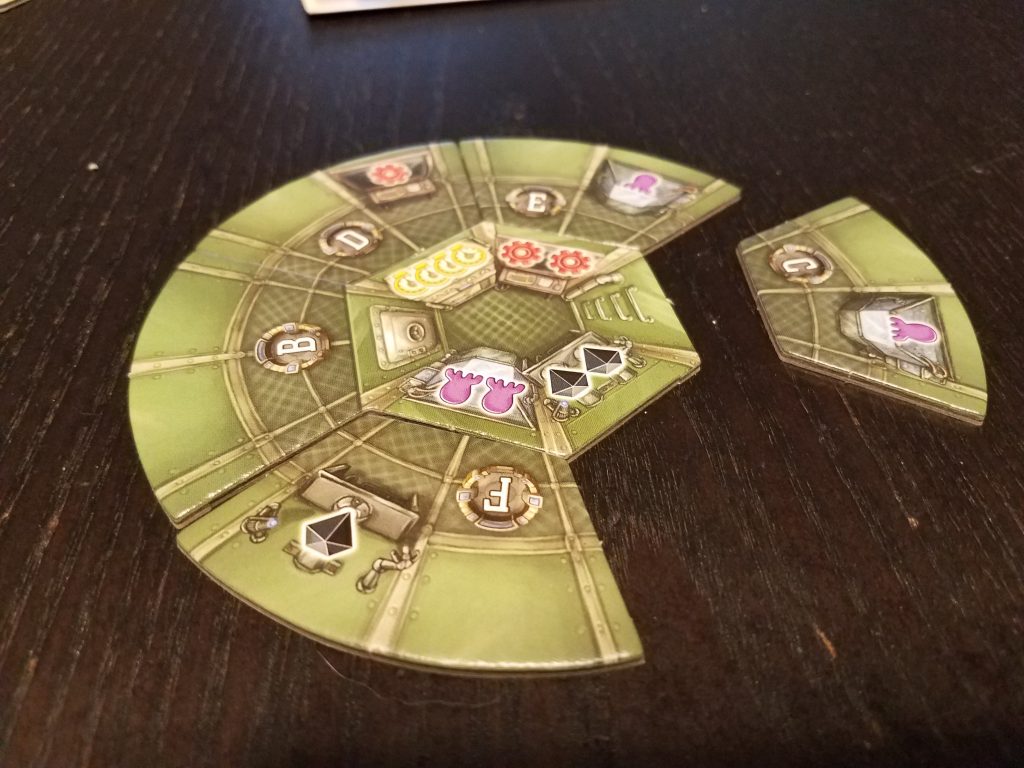 AquaSphere is a game all about carefully measured moves.  The tight playtime means that every action needs to be considered, not just in the moment, but with how it will play out over the course of an entire round, and there are precious few of those.  It’s far from the heaviest game we have ever played, but it’s certainly no lightweight, rewarding tactical thinking and punishing careless plays.

Jess:  Or you can just do some stuff, get some points, and call it a day.

Josh:  Truth. AquaSphere is definitely a thinker, but its possible to play it in a more relaxed way.  You’ll still do lots of stuff; you’ll launch subs and program bots and poke some octopods, and you’ll certainly get points all along the way.  And that can plenty satisfying.  But you’re just probably not going to win.

Jess:  I thought it was fun for what it was, but man, it felt like we played the whole game with our hands tied behind our backs.  I spent time getting to a good place, trying to form a strategy, but your options are so limited and the game is so short, I never felt like I could really stretch and play the game.

Andrew:  Same.  I guess my greatest disappointment is that the game has a fantastic theme, but it is completely pasted on, and falls away within moments of the game starting up. 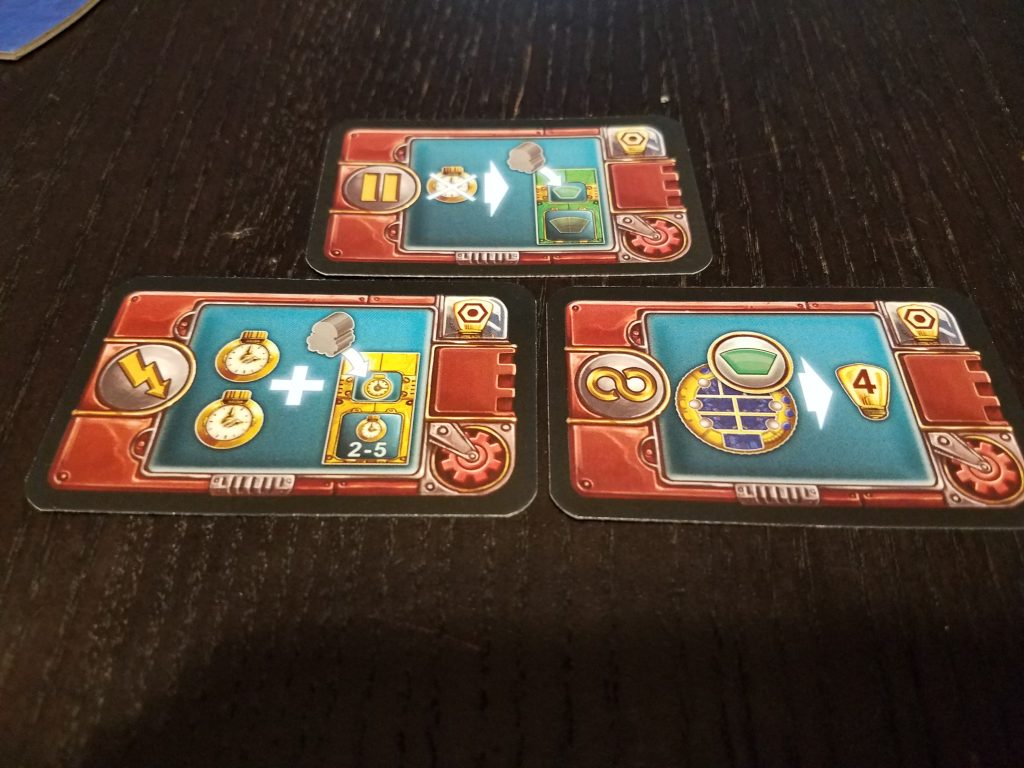 Our recommendation for AquaSphere is that, for people who are excited by a more tactical kind of Euro (and the potential analysis paralysis which goes with it), there is fun to be found here.  That said, it wasn’t really our speed; too tight, too abstract, too thinky.

(Gameosity received a review copy of this title.  We weren’t otherwise compensated.)