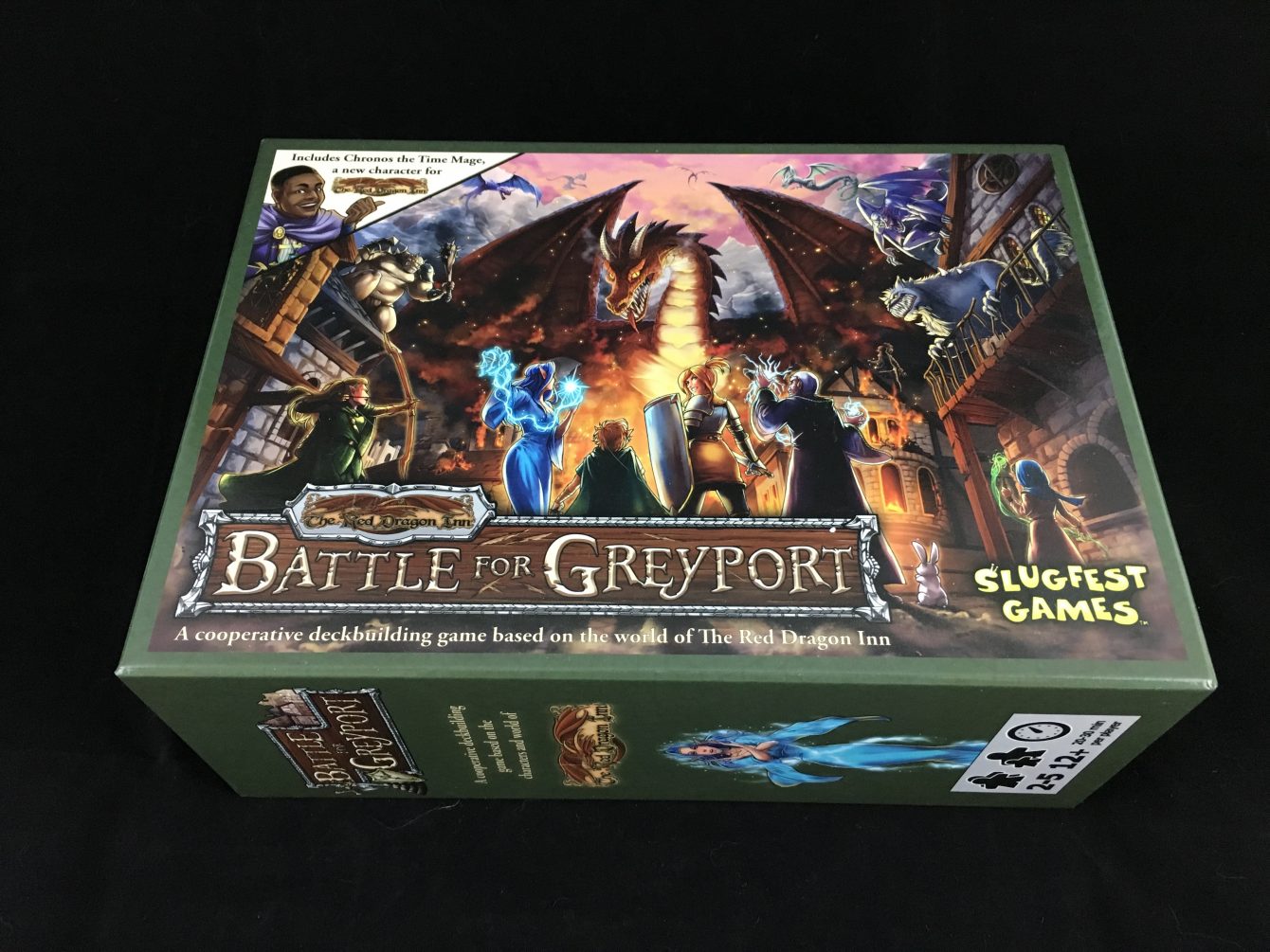 Battle for Greyport is a fairly straightforward-looking game that will eat you alive if you're not prepared.  With some clever mechanics to inspire teamwork and group coordination, this co-op deckbuilder may not be for the faint of heart, but we really enjoyed it.

I was not ready.

Diana: I don’t think either of us were.

Even in hindsight it’s unclear whether it was due to a misunderstood explanation or personal bias based on the look of the components, but either way Battle for Greyport ended up being much more of a challenge than expected. This is not a bad thing; it’s more of a “know going in” sort of thing with a sprinkling of “appearances can be misleading.” But yeah, seriously, this game doesn’t mess around.

Battle for Greyport is a cooperative deck builder that ties into the setting for Red Dragon Inn, another Slugfest game series about hard-drinking heroes celebrating after a successful dungeon delve.  And just like Red Dragon Inn, Battle for Greyport is also very much centered around different characters who each have their own specialities and can attain new unique skills as they level-up. A neat combination of card drafting and character growth, really.

Rob: You know, I expected this to be a lot more complicated when we first opened the box. There are so many cards with slightly different details on them, and a few that are weird sizes. I was thinking it would be some sort of logistical nightmare.

Diana: Good thing all the scary looking stuff is just for the setup. I kind of like that, actually, how most of the scenario-specific and player count-specific details are just there to let you know what monster decks to use, how many cards to add to each pile, and so on.  It made setup way less daunting and let you get to the good stuff quicker.

There are a number of scenarios in Battle for Greyport, and within each scenario are different Encounters. These will determine what enemies players will have to deal with (regular monsters and bosses) as well as what locations they’ll have to defend. Win and loss conditions can vary depending on the scenario, but the general rule is to not let all of the locations get destroyed and also don’t get killed.

Rob: It sounds so simple, doesn’t it?  But as is usually the norm in cooperative games, the task of defending the city while staying alive is pretty freaking tough.

The good news is that Battle for Greyport doesn’t resort to cheap-feeling tactics, such as tossing wave after wave of fodder at players to wear them down – it’s not all that common for new monsters to show up at all during a given Encounter.

Diana: Right!  Instead, it provides its challenge by making the fodder not fodder, which is to say even the small fry will take a fair bit of effort to get rid of (at least in the early stages), and it’s super easy to get dead if you aren’t paying attention to how they’ll whittle your health down.

The best way to offset the threat of all these monsters chipping away at player health and the health of the city’s locations, aside from filling your deck with powerful cards, is to work together. What’s neat about Battle for Greyport is that it’s designed around the idea that players can (and should) use cards on other players’ turns to assist, as well as pull monsters away from vulnerable locations and players with taunts.

Diana: Once we started to figure it all out, things got a little more under control. Until you died, anyway.

Rob: Yeah, I probably shouldn’t have played as a frail spell caster on my first attempt.

Diana: That and we probably didn’t capitalize on playing cards during each other’s turns enough.  That’s clearly really important, but it’s a switch from how a lot of co-op/deckbuilders work.

Rob: That too, probably. I do like how playing cards on other players’ turns is a thing, though. It kept me focused on what was happening throughout the entire game, and I always appreciate it when games reduce or eliminate downtime.

Our fatal losses aside, Battle for Greyport is a solid cooperative deck builder that will eat you alive if you don’t work together. It’s great, especially if you like the Red Dragon Inn setting (believe us, your surviving heroes will deserve a drink once the fighting’s done), and the way players can help out during each others turns is a cool little touch that keeps everyone engaged. If you’re looking for a new deck builder, Battle for Greyport is totally worth checking out!

One thought on “Battle for Greyport Review”