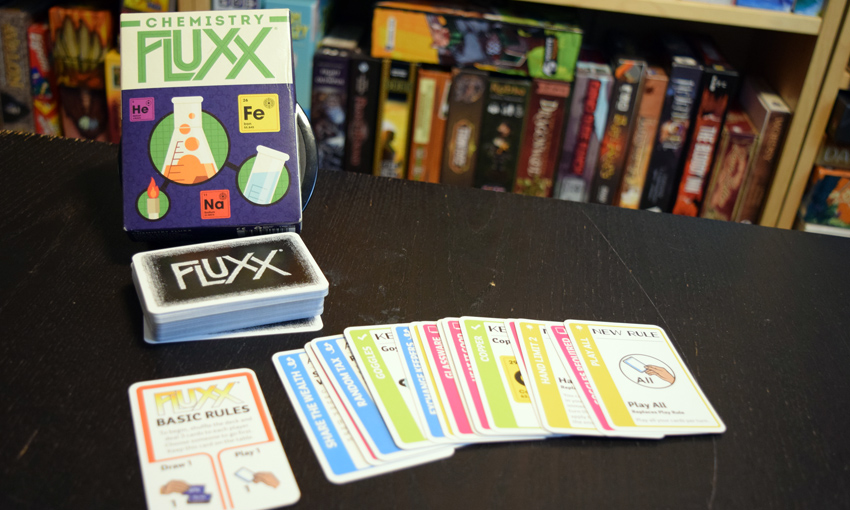 Chemistry Fluxx is an oddly serious take on the chaotic Fluxx gameplay.  While it doesn't innovate on the core in any way, if you like the theme and don't dislike the randomness inherent in the series, it could be an adequate filler.

Ok, so, real talk for a second.  We rag on Fluxx a bit.  Which is a bit of a surprise to me, actually – there was a time, back in college, when this small box game of ever-shifting goals and rules was among our game night staples.  But time, and exposure to more rich, satisfying games from all over the hobby, have, admittedly, dulled our appreciation for this odd little duck of a game.

Andrew: But there was something about the art of Chemistry Fluxx that grabbed my attention.  Somehow, this bookish cover intrigued me with its retro aesthetic, and got me to consider; if any single theme would make the Fluxx formula work – of chaotic rules changes and odd set collection – then chemistry might just be it.

Jess: And did it? 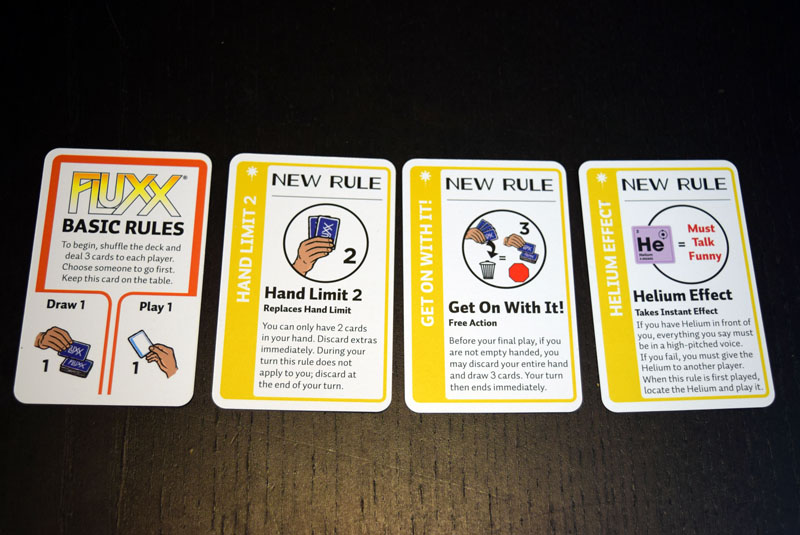 For the uninitiated, Fluxx and its many variants start with a simple rules premise – draw one card, then play one card.  Whatever the card you play says, you must do.  Some of these cards are Keepers, cards that sit in your tableau and, well, just sit there.  Some cards are Goals, table-wide victory criteria (usually relating to combinations of Keepers).  Some cards are Actions, and these are varied.  And some cards are New Rules which immediately alter the way the game is played, either making you draw or play additional cards, set hand limits, force certain plays to be random, and lots more.

Jess: The chaos *is* Fluxx, and I think that’s why we out-grew it at a certain point.  We like games that let us build things or have clever strategies or tell interesting stories, and Fluxx does none of those things.  What it does do is provide a goofy, random potentially fun experience for those seeking the lightest of fillers. 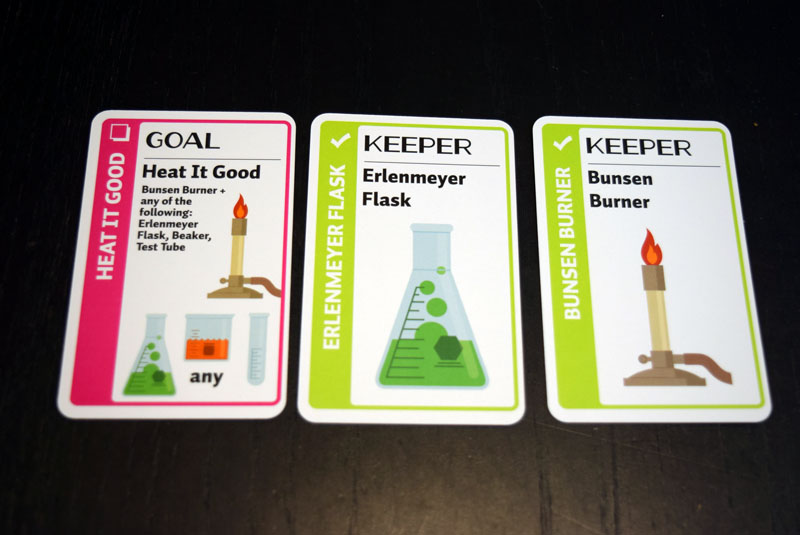 Chemistry Fluxx is fundamentally just like every other flavor of Fluxx; draw one, play one, and gather Keepers to satisfy Goals.  However, unlike Monty Python Fluxx, or Star Wars Fluxx, or Hippie Fluxx or whatever million other variants there are, Chemistry Fluxx’s subject makes for some natural synergy with the mechanisms of the game. 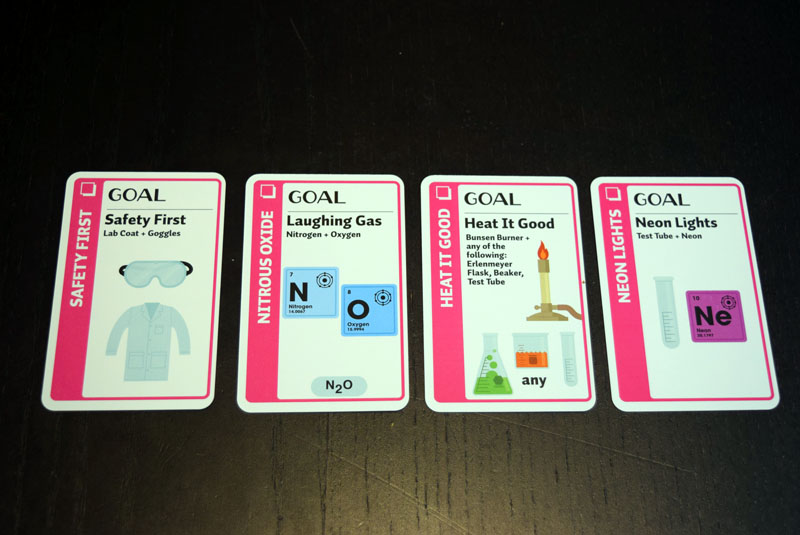 Most Goal cards involve creating some chemical compound or reaction by way of having the right combination of Keepers.  Is that fundamentally different than the Chocolate Milk goal of the original Fluxx (having, you guessed it, Chocolate and Milk)?  Well, no, but the theme made the game feel just a touch more cohesive than the pure randomness of other forms of Fluxx. 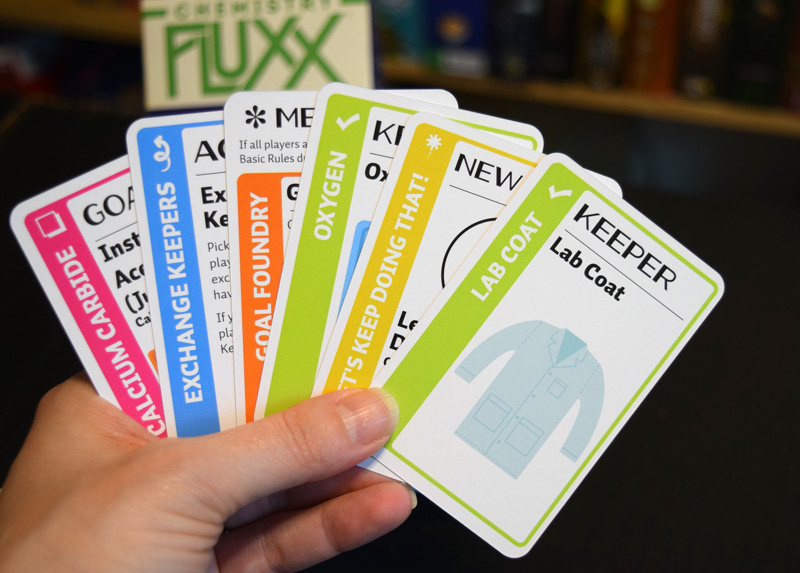 Of course, it’s still, you know, Fluxx.  You won’t be making meaningful decisions most of the time, and the game is just as likely to spin around itself endlessly as players helplessly follow some nightmarish combination of ‘Draw 5/Play All’ rules that make every turn just a flurry of involuntary card activity.

Jess: The chemistry theme doesn’t innovate on the core, so if you’re looking for something with depth, creativity, or substance, this still won’t be a game for you.  And for folks who thought that the goofy, odd goals and keepers from the core game were charming may be disappointed by this clinical, relatively humorless take on Fluxx.

Andrew: True.  My big disappointment, though is the fact that the great art that initially attracted me to the title is limited entirely to the game box.  I was really hoping for more of the retro-textbook aesthetic throughout, but alas not.

Chemistry Fluxx is a typical example of a Fluxx game.  It’s chaotic and arbitrary, but if that’s ok by you, it’s also pleasantly themed and potentially educational, too.