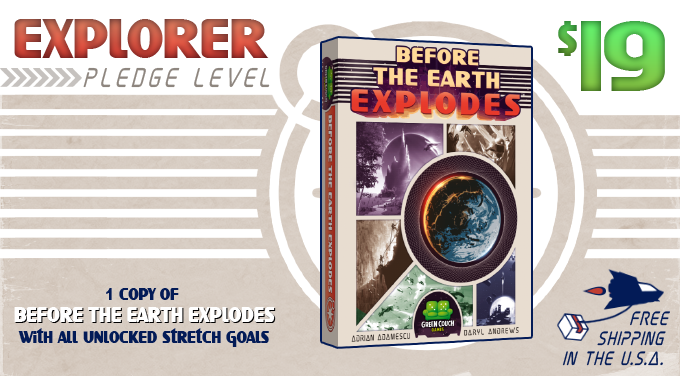 Before The Earth Explodes is a great little game, combining action selection, a twist on rock-paper-scissors, and a bit of mind-games to make for a tight, playable, and fun package.

With the Kickstarter of Before The Earth Explodes, the folks at Green Couch Games are looking to add another winner to their excellent library of small-box games.  Before The Earth Explodes (which has a title that is only technically true, but more on that in a sec) is a game for 2, where both players race to be the first to meet one of the game’s several victory conditions – the Earth is failing, and only one group of lucky humans will manage to find a way of surviving! 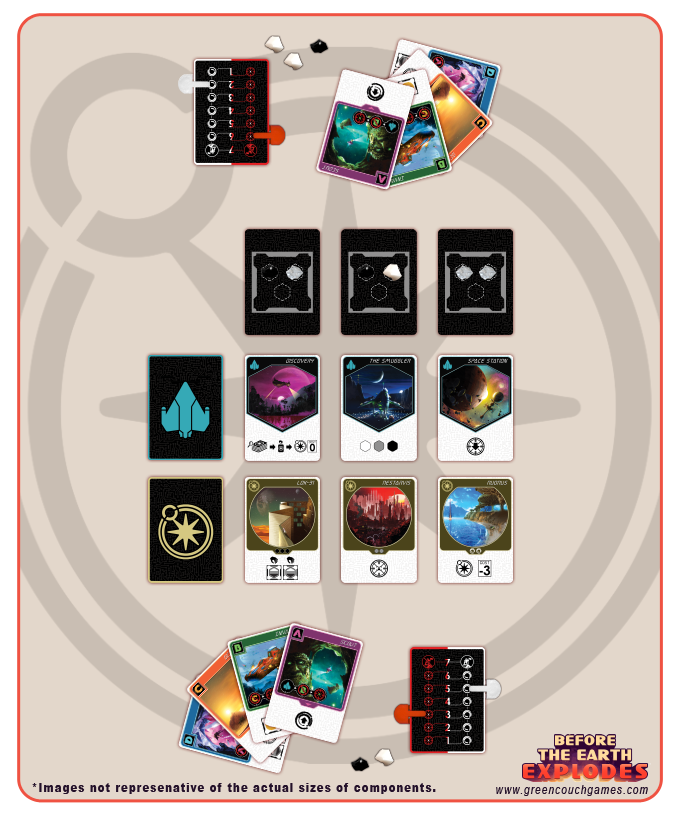 Andrew:  Look, I don’t really know about that last bit – Before The Earth Explodes is pretty darn abstract when it comes right down to it – the theme is just pasted on, really.

Jess:  Yeah, I have to say, the title made me think there might be, you know, an explosion of some kind?  But that’s fine, I like my planet – the lack of actual detonation didn’t really trouble me much.

As mentioned, there are several victory conditions in Before The Earth Explodes.  The first player to reach one of them wins! 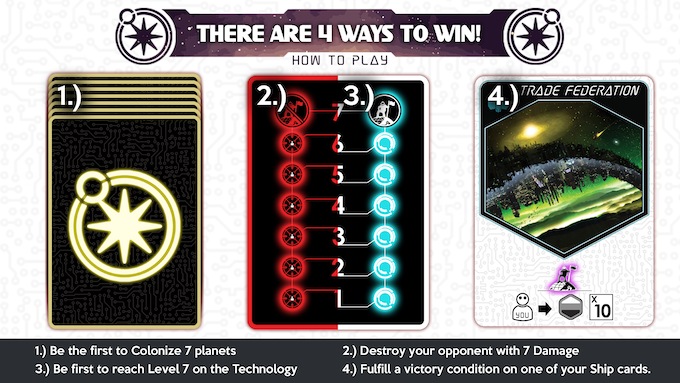 andrew Here we’ve got one of my favorite things about Before The Earth Explodes– there are a handful of ways to win, and it’s entirely possible to be headed one way and then switch tactics mid-stream, going for another sort of win entirely.

In Before The Earth Explodes, players have 4 actions available to them and each turn, they will secretly pick which of these they will take that round.  Chosen actions are revealed simultaneously and then resolved in letter order.

These actions will generally do several things, including allowing you to gain ship cards (one-time effects of alternate victory conditions), colonize planets more easily, or gather resources.  However, several actions will also cancel your opponent’s action should you accurately predict what they will play, a la rock-paper-scissors.

Jess:  Immediately, the mind game between players begins, because if you can manage to psych out your opponent and guess their move accurately, you can shut them down for a turn while making progress to your own goals!  This is my favorite part of Before The Earth Explodes by far, since it sets up neat tension from the very first play.

Andrew:  Absolutely!  I also liked how dead-simply they handled tie-breaking when players pick the same action; the tie-breaker card indicates one player until a tie is broken in their favor.  Then it simply gets flipped to the other player’s color.

After players resolve their actions, both (assuming no one got cancelled) have an opportunity to colonize a planet by paying the cost in resources shown.  Planet cards, in addition to being part of one of the victory conditions, give one-time-use abilities or resources.

Jess:  That’s pretty much it. Before The Earth Explodes will go back and forth, with players amping up their tech, knocking each other around to deal damage, and colonizing planets and gathering a fleet of ships until someone manages a win.

Andrew:  And it works really well!  We had a lot of fun with Before The Earth Explodes, especially that central head-game of trying to best predict what the other player will do with their action.  My only complaint, honestly, is the title, funny as it sounds.

Jess:  Yeah, I know exactly what you mean!  The title makes it sound like it will be a high-stakes, really urgent, action-packed experience of some sort, and while you are technically racing toward winning before someone else does, at no point does the theme really seem to matter, and the only urgency comes from the other player’s progress.

Andrew:  Yep.  Still, I think this one looks great, and I’m super-excited to see what the campaign stretch goals might be like.  There is already a purely superfluous but attractive playmat add-on to be considered.

Before The Earth Explodes is a really fun, tight 2-player experience.  Its mechanisms are simple and easy to manage, its table footprint is small, and its playtime is short – essentially the perfect combination of traits for a ‘throw it in your backpack’ game you can play anywhere you have a little bit of flat surface to claim.  This one’s a winner.

Check out the Before The Earth Explodes Kickstarter today!

(Gameosity received a prototype copy of this game, with the promise of a retail copy upon request.  We were not otherwise compensated.)