The Shipwreck Arcana is an interesting, light game of deduction.  The art is really fantastic and the gameplay is simple, though the challenge of playing well can be pretty high.

Emerging from the depths of Kickstarter, The Shipwreck Arcana is a uniquely beautiful game of deduction and logic.  Separated from its interesting (if entirely pasted on) theme, the mechanical core of this quick, light game is easy to explain – cooperatively, your group must successfully guess a series of randomly drawn numbers, given guiding criteria based on several descriptive cards.

Jess:  Or maybe not so easy to explain?

Andrew:  Ok, admittedly that came out a bit convoluted.  But The Shipwreck Arcana isn’t that, for sure.  Let’s dive deeper. 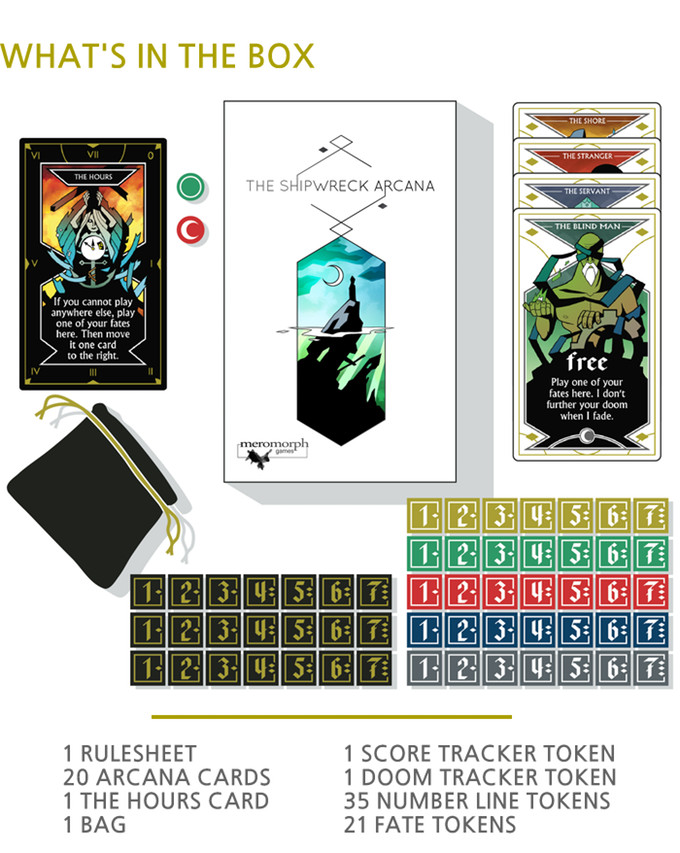 The theme of The Shipwreck Arcana paints a stark, lonely picture – you and your friends are trapped in a drowned world, doomed to the oblivion of the abyss.  However, hope for salvation comes in the form of the titular Shipwreck Arcana – a deck of mystical cards which can be used to defy fate and guide your allies free from their doom.

Jess:  And when you put it that way, it doesn’t immediately sound like a game about guessing the hidden number, but that’s precisely what it is. 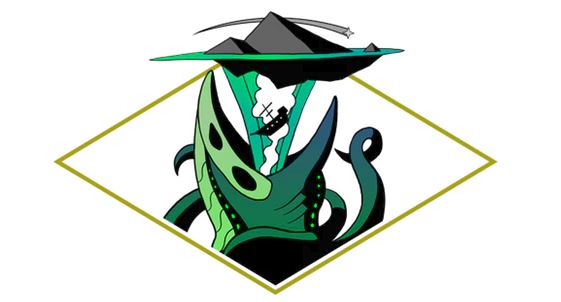 In The Shipwreck Arcana, players must work together.  On each turn, a player will draw 2 numbered tiles from the bag; these fate tokens are the object of the group’s deduction – if the other players can manage to guess which number you are holding, the group advances their efforts toward rescuing themselves from oblivion. 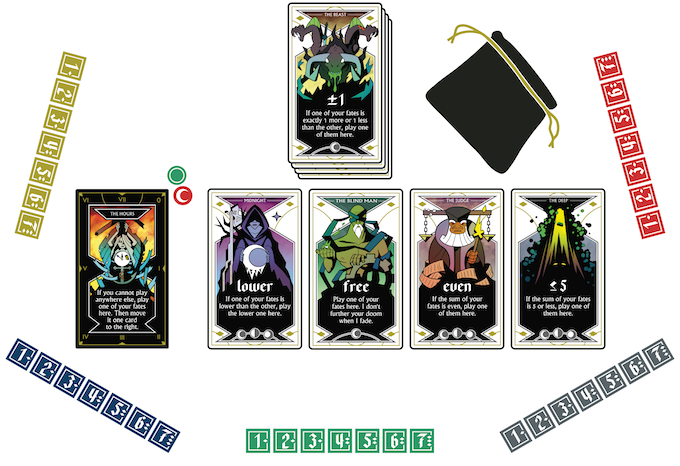 In order to make this deduction possible, the active player will place one of the two tiles they hold at the foot of one of the Arcana cards, obeying the rules of that card.  Their goal is to guide the group toward the value of the other fate token, the one they are holding in reserve.

For example, by placing a fate token at the foot of the Midnight Arcana, you are indicating to the group that your hidden token is of a higher value than the one you’ve just placed.

This process can be repeated turn after turn, with active players adding fate tokens to the tableau in an effort to describe the hidden token they hold.  When the group feels confident, they can make a formal guess.  Should they be correct, the group advances their progress marker – 7 correct guesses and the group wins.  However, should the guess be incorrect, the Doom marker advances, bringing the end ever-closer. 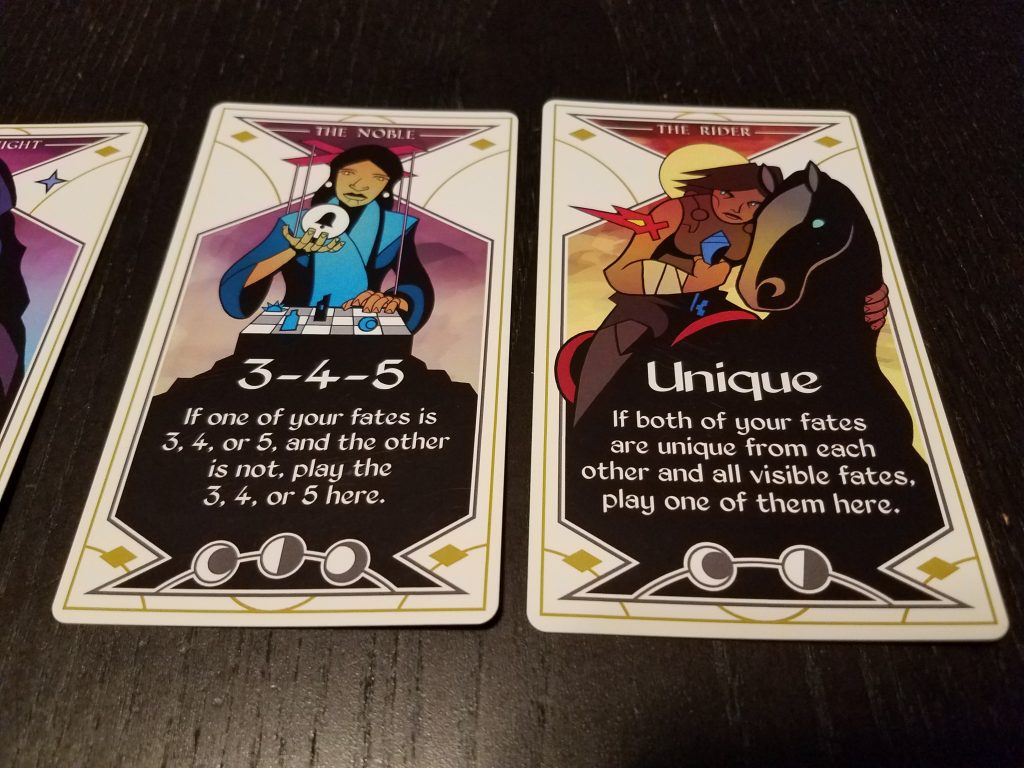 Andrew:  Each time you use the power of the arcana to help your group try and guess your fate token, you will deplete the power of that card a bit.  Arcana can only be used so many times before they ‘fade’ and are removed from the game…at the cost of 2 Doom, no less!  Make those guesses count!

The Shipwreck Arcana really is a compact, simple game, rooted firmly in the logic puzzle of using the arcana cards to communicate to your group.  In this way, it’s simplicity is its brilliance – while the randomness of the available arcana can be occasionally hampering and the game often extremely challenging, for those who appreciate this sort of deductive logic it’s going to be a fantastic little filler. 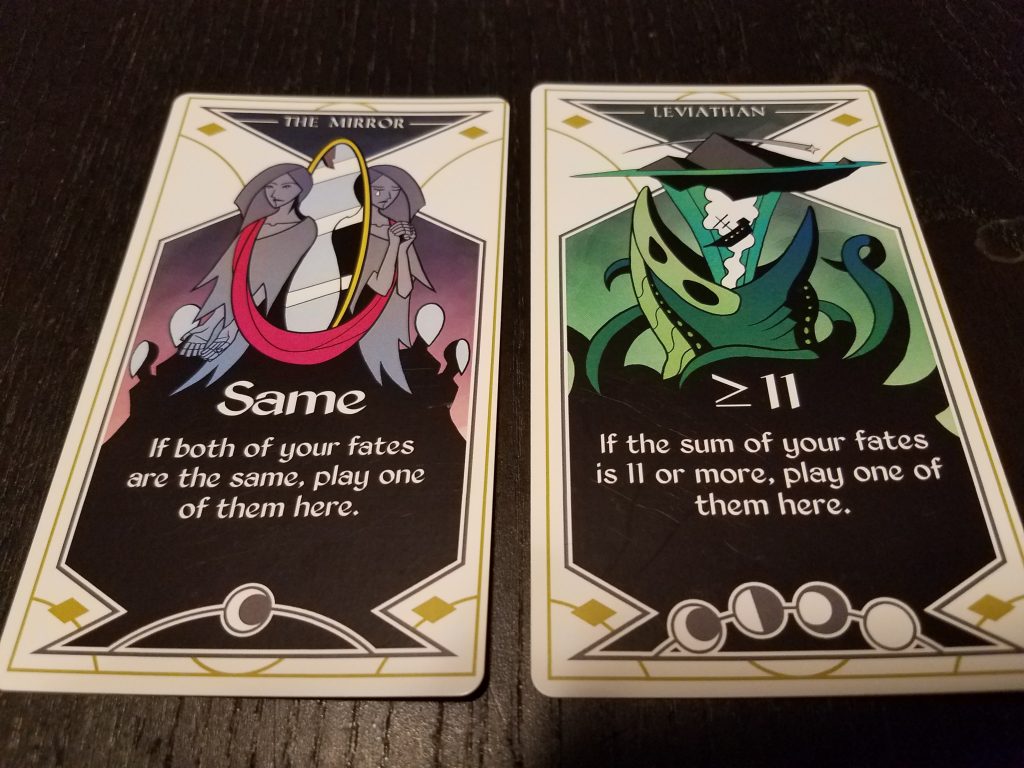 Jess:  I completely agree!  And even though we got down on it a bit for how themeless the game really is, with art this amazing, who cares!

Andrew:  For sure.  The look of The Shipwreck Arcana makes it worth having, honestly, for the art if nothing else.  And I really did like the game for precisely what it was – tough, logical, and gorgeous.  My only real criticism of it is that if you have a flop of the wrong arcana, you can easily end up screwed through no real fault of your own.  But if you can accept that randomness along with the territory, The Shipwreck Arcana will be a great game for the right group. 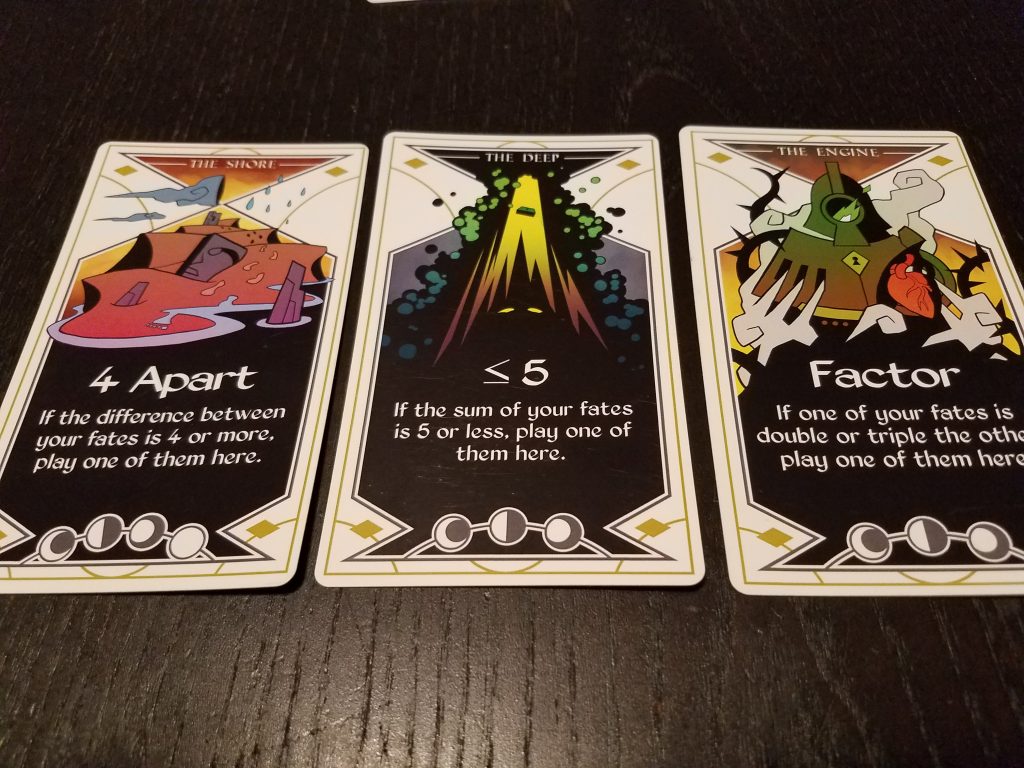 (Gameosity received a preview copy of this game, with the promise of a retail copy at our request.  We were not otherwise compensated.)