Caverna: Cave vs Cave is a fantastic little game for 2, giving players the satisfying 'I built something' experience of a heavier euro-style game in a fraction of the time.  Smart design choices also keep this one from getting stale too quickly, as there is a lot of built-in variety to gameplay strategies across multiple sessions.

In Caverna: Cave vs Cave, players will compete to create the most luxurious, valuable, downright kickass cave home anyone could possibly wish for.  Played over the course of 8 rounds, players of Caverna: Cave vs Cave will excavate their respective caves, gather up resources such as wood, stone, flax, and emmer (which the rules assure me is some sort of ancient grain), and build new rooms within their caves, each trying to out-do their opponent like some sort of medieval dwarven interior design reality show!

Jess: Ok, that last bit about the reality show isn’t true, but Caverna: Cave vs Cave really is sort of a neat riff on the essentials of the tile-laying formula.  It’s not deep or complex like, say, Caverna (sorry Rob), but it plays in a fraction of the time and still gives you that satisfying feeling of having built something.

In Caverna: Cave vs Cave, players will take turns selecting actions from those available.  Smartly, actions become options progressively, with early game actions focusing mostly on resource gathering and cave excavation, while mid-and late-game actions make it easier to build structures and turn resources into points.  However, since new action tiles are revealed one at a time (and are randomly arranged within their tiers), the order in which actions become available adds to the variance between games and serves to keep repeated plays fresh. 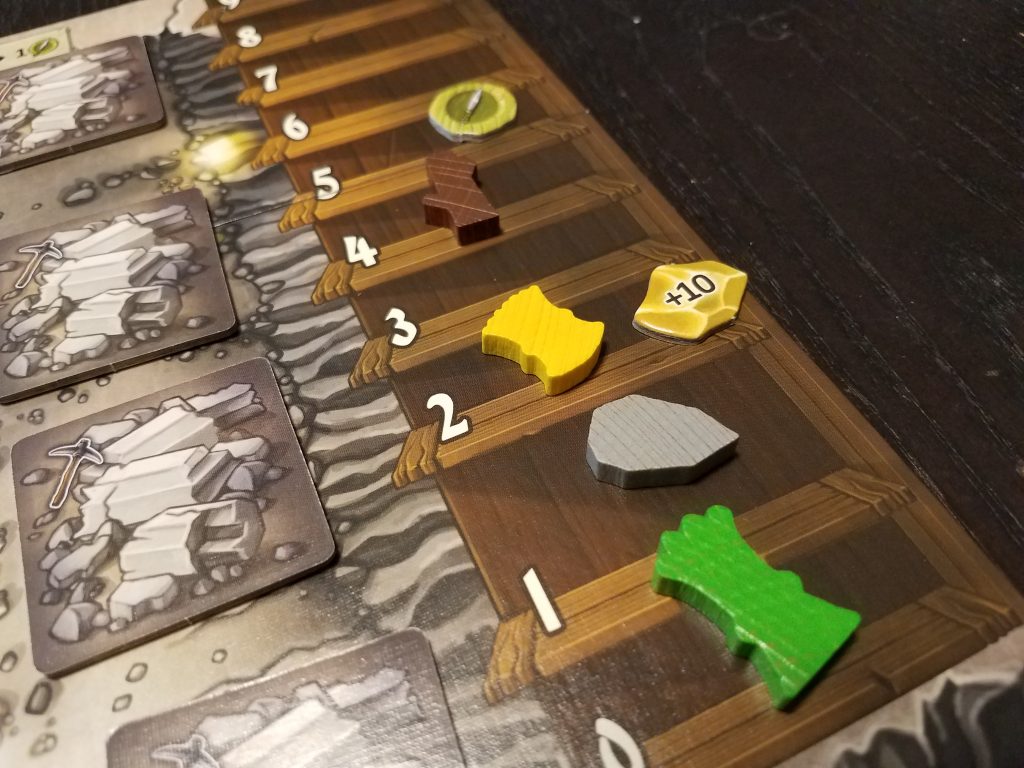 Another design element that will keep Caverna: Cave vs Cave from going stale (at least before they add the inevitable pile of expansion tiles) is that the rooms which players can add to their caves begin as randomly-distributed face-down cave tiles which cover the players’ boards.  These rooms only appear for construction as players excavate their caves (aside from the 6 starter rooms), and that means that the available rooms will become available randomly as the game goes on. 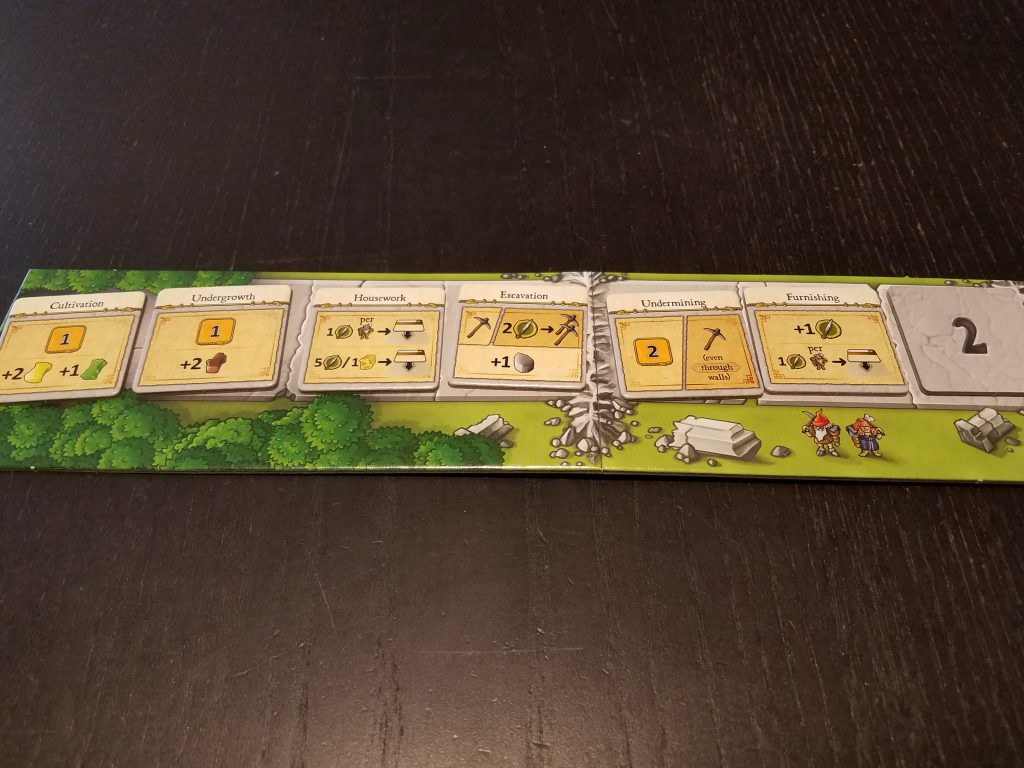 Room tiles, in addition to simply sprucing up your cave, provide victory points, as well as either persistent bonuses you get for the rest of the game (blue rooms), or acting as additional action spaces which are only usable by the player who has built the room (orange rooms).  In

Building rooms requires the expenditure of various resources, as well as respecting the ‘wall requirements’ of each room – rooms must be built with respect to the walls of the cave, either the perimeter or internal, as specified in each room. 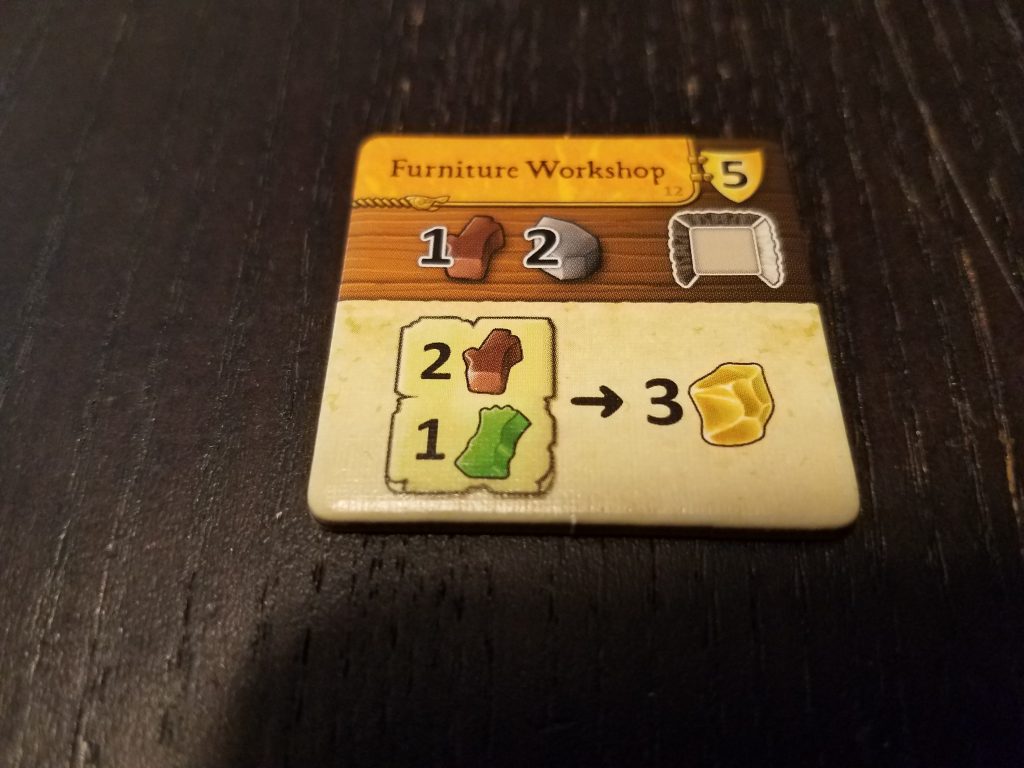 Jess: This puzzle element, of making sure that you have the walls/free space that you need to build a room, adds just enough to chew on so that you need to do more than just buy the most valuable room tile at any given moment; you need to think about how your cave fits together, too. 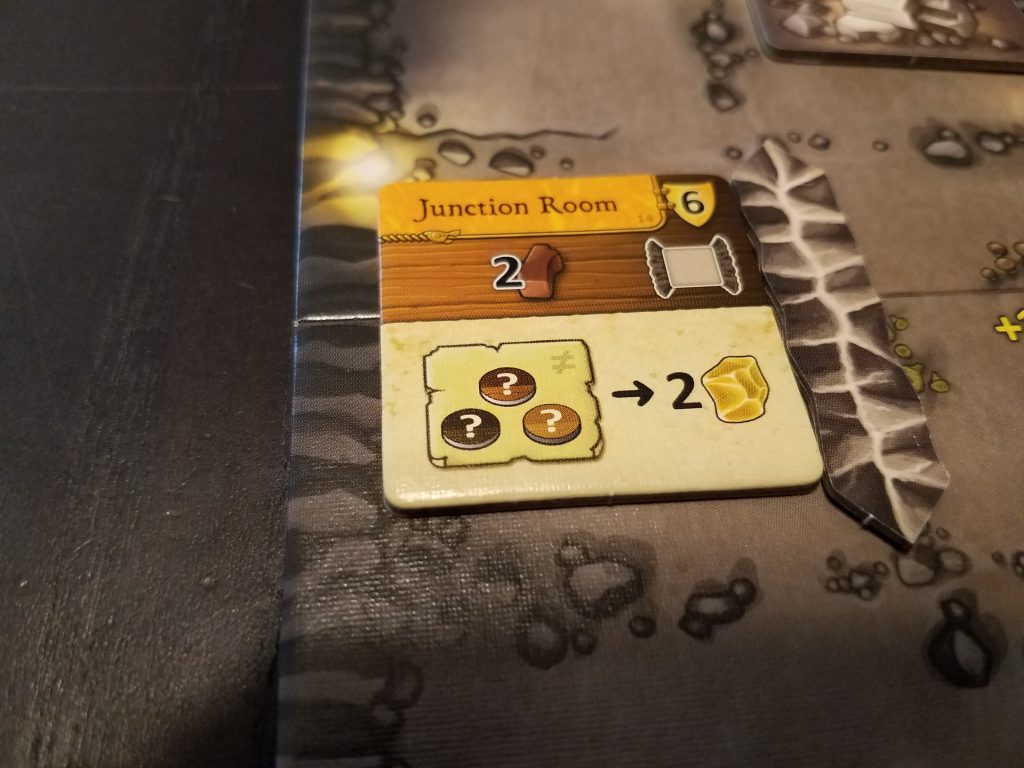 At the end of 8 rounds, cave designers compare the value of the rooms they have built plus the gold they have acquired, with the player who has managed to build out the most desirable cave is declared dwarven interior designer of the year!…or at least winner. 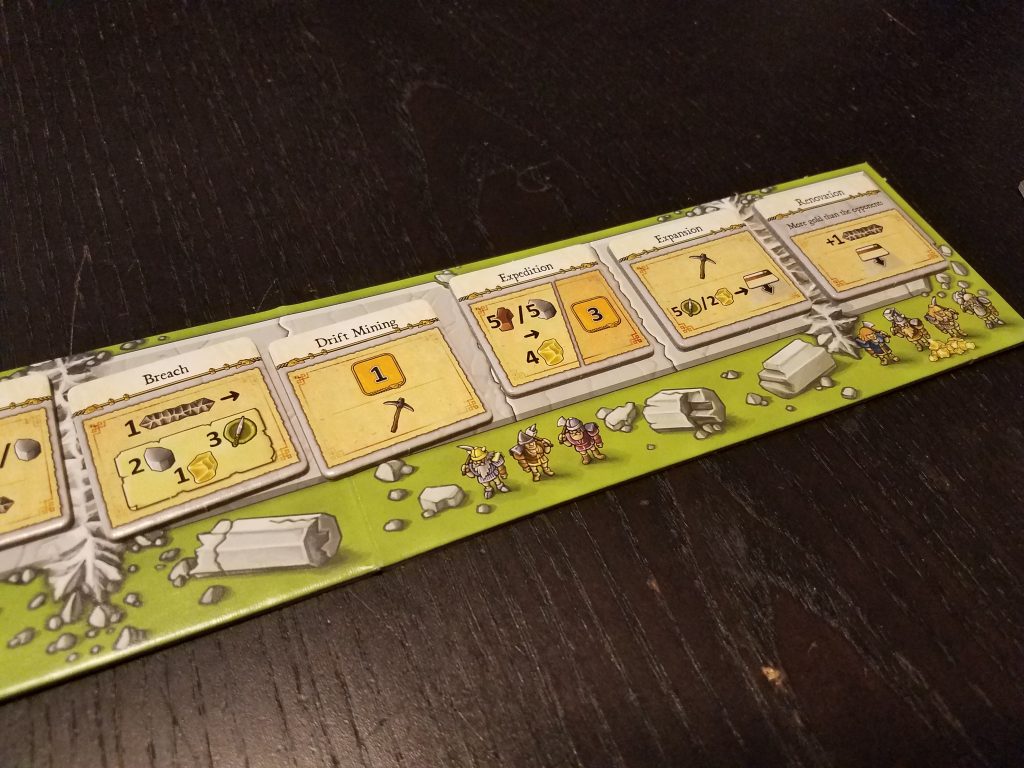 Andrew: One of my favorite things about Caverna: Cave vs Cave is how it organically changes with each play.  The way your tactics change due to the presence or absence of actions and room tiles keeps you from feeling like a rote strategy will work.  These simple design choices add lots of interest and replayability to what is, by all rights, a short, simple game. 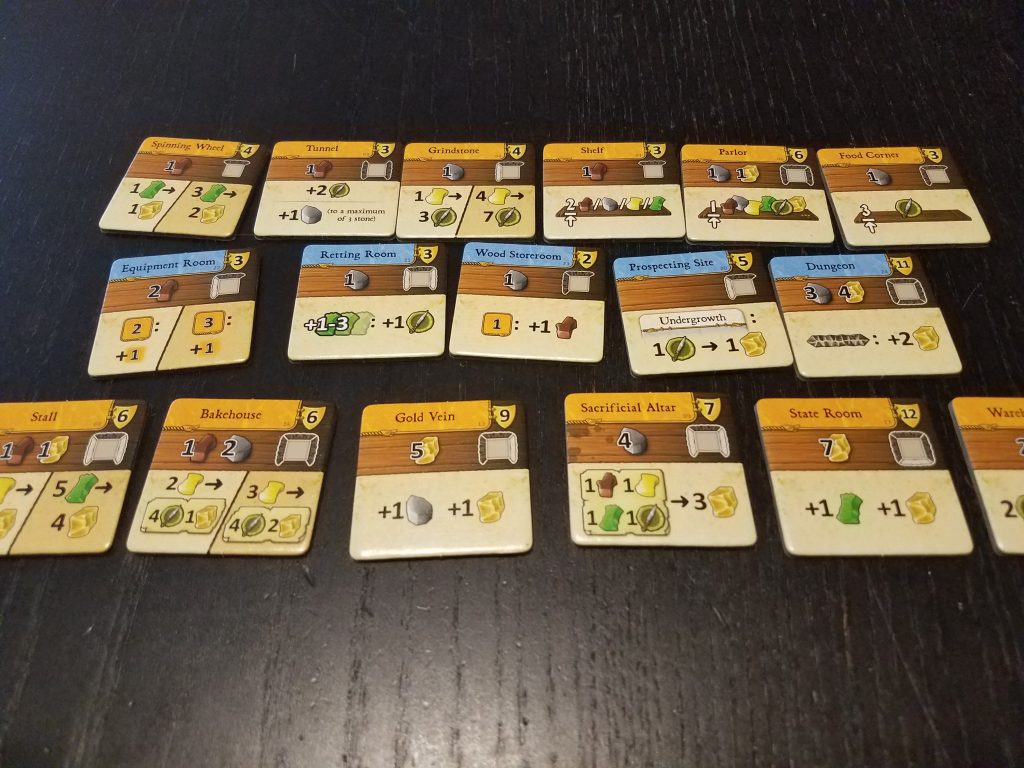 Jess: Totally. Caverna: Cave vs Cave is pretty darn great, delivering on the core experience effectively from the very first couple of turns.  I like this one a lot.

Andrew: Me too.  It’s right up there with other excellent 2-player games like Agricola: All Creatures Big and Small, distilling a big-game feel into a perfect serving for 2. 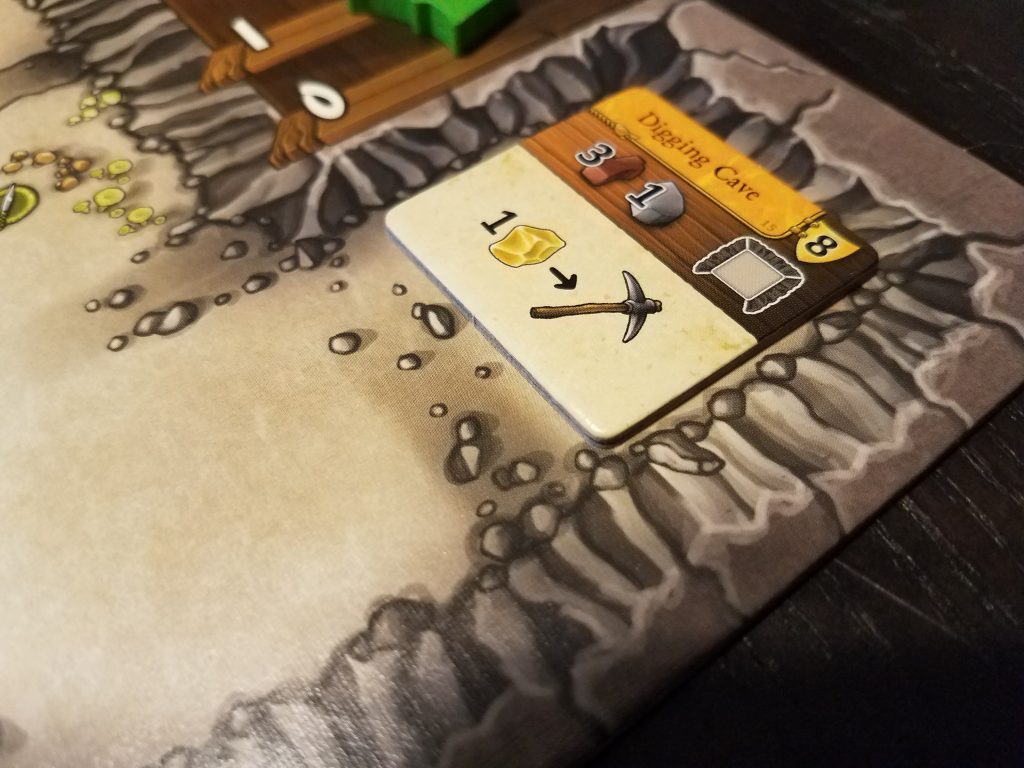 It’s also got a solo mode (that we haven’t checked out, admittedly), so maybe Rob will find something worth playing here.  But regardless, we strongly recommend Caverna: Cave vs Cave and think it’s a great date-night game to boot!