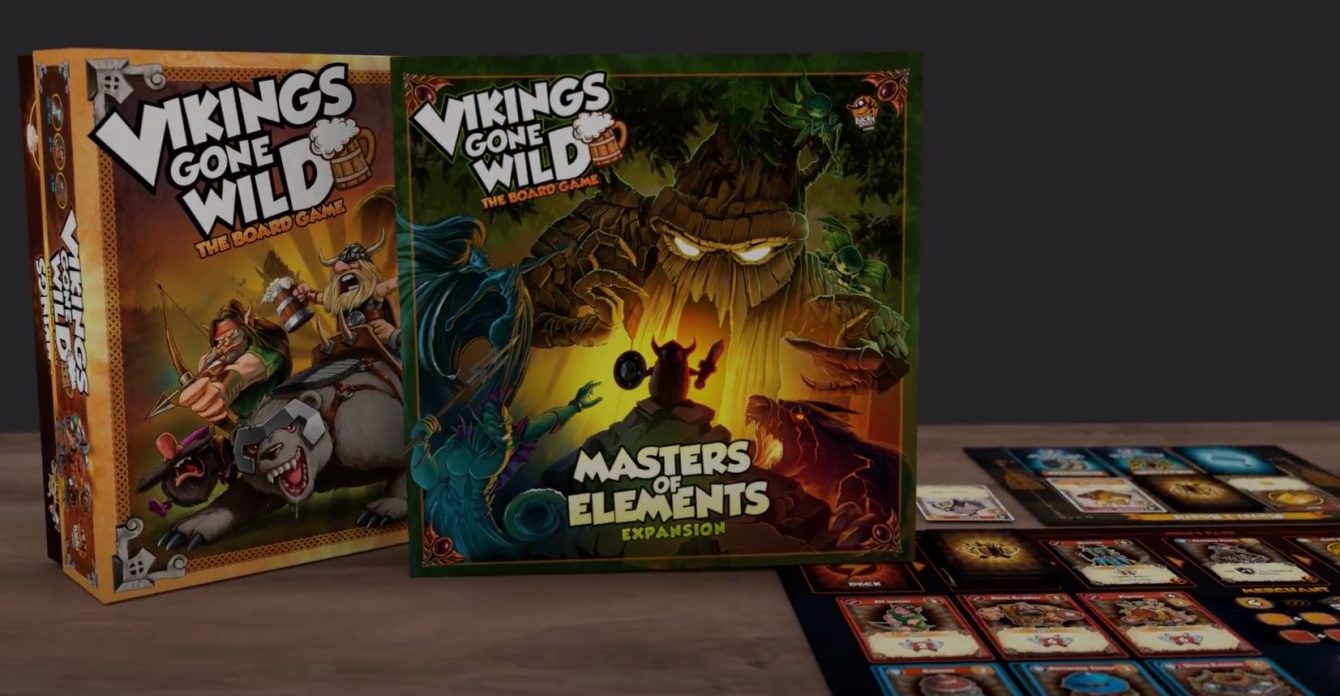 Masters of Elements is the biggest expansion for Vikings Gone Wild by far, adding a new resource as well as a whole host of new monsters eager to join your deck.  The Elements resource powers versatile new artifacts, and a pile of new quests adds to the core of what made the original awesome.

*The Kickstarter is live, and already crushing it!*

A while back, when Gameosity was young and I was less self-conscious of how I looked in a make-shift toga, we previewed Vikings Gone Wild, a deck and tableau building game of Norse beer breweries and mythological monsters.  And we liked it just great!

And now from Lucky Duck Games comes Masters of Elements, the newest expansion on the viking frat party that is Vikings Gone Wild! 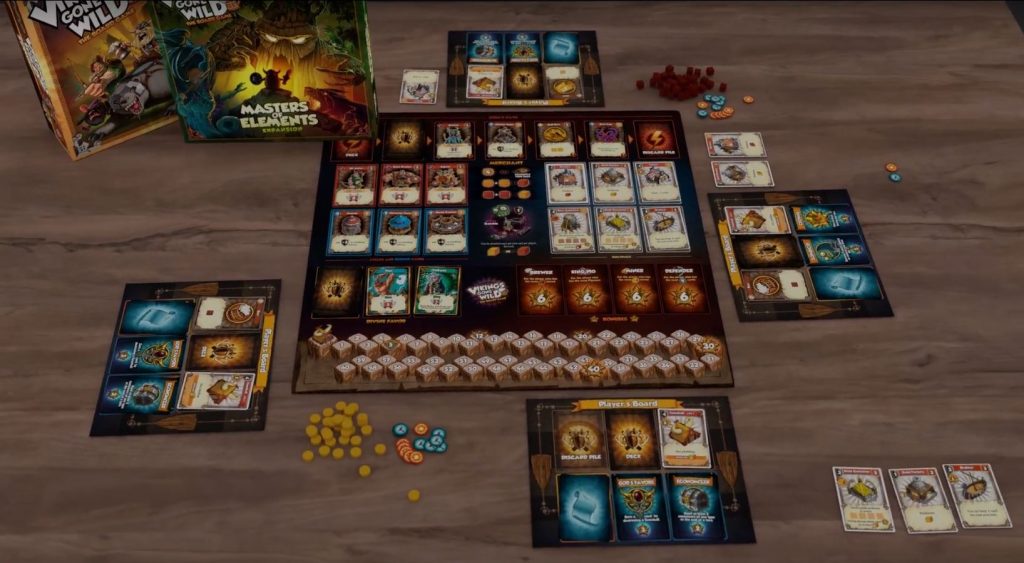 **Kickstarter preview alert! All you see is either prototype or art assets gently lifted from official sources.  Everything is subject to change!**

Masters of Elements has a few new twists on the classic Vikings Gone Wild formula, changing up the core game in a handful of neat ways.  We’re going to break down each of the main differences here chunk by chunk, and give our thoughts on each (but to be clear, these aren’t modules – all of Masters of Elements is meant to be used as a single cohesive expansion).  Grab your stein and join us!

The Master of Elements 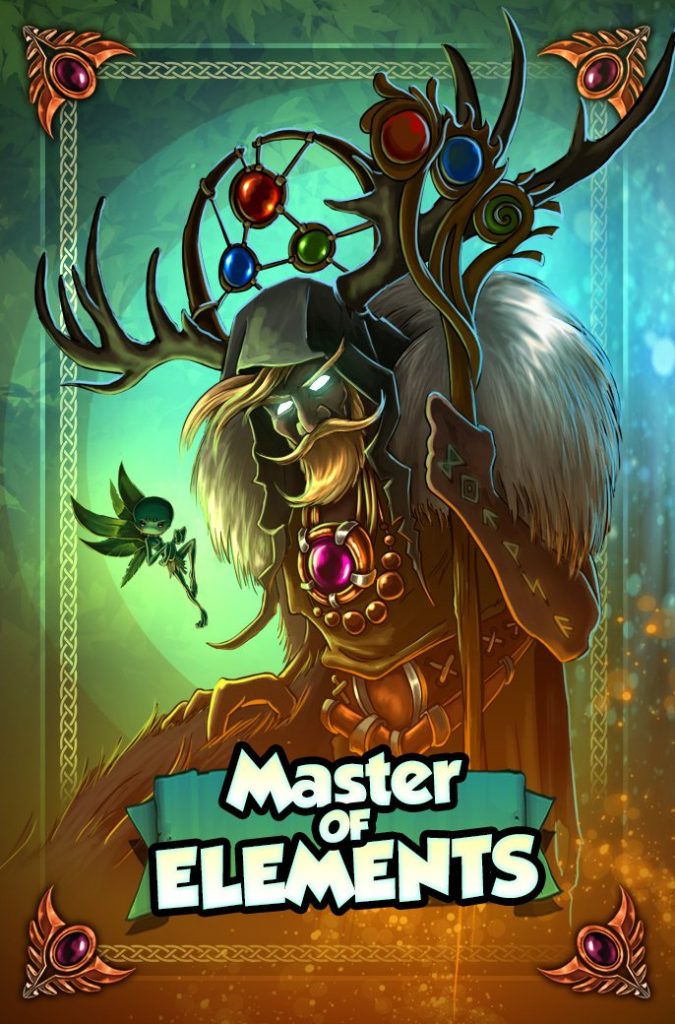 The aspect the expansion was named for is a unique unit that each player starts with.  The titular Master serves double-duty: each turn, during the resource phase, the Master will generate an element token, which needs to be stored on one of your buildings (the token doesn’t take up that building’s resources or functions, it just limits the number of tokens you can have to one per building).  These tokens can be spent each turn to power various other effects on the other cards introduced in Masters of Elements.

You can also upgrade your Master to give you access to more potent Artifact abilities (more on that in a sec), and a fully upgraded Master rewards some victory points, too!

Element tokens are spent on card abilities, activating artifacts, boosting card effects, and can also be spent to provide gold and beer, making them a versatile currency in the economy of the game.

Andrew: The Elements are the new resource in Masters of Elements, and as such the Master is an integral part of the expansion.  My one criticism here is that it’s just one more thing to remember – each turn, a token comes out, and you need to decide which flavor it will be.  It’s just a tiny bit of extra bookkeeping, but it sticks out in the otherwise smooth turn flow.

Jess:  Yep, I agree on all points.  The elements and the Master thereof are just there to make the rest of the expansion work, and the little detail of their management (which isn’t a big deal at all, really) is the price you pay to get to the rest of the good stuff in Masters of Elements. 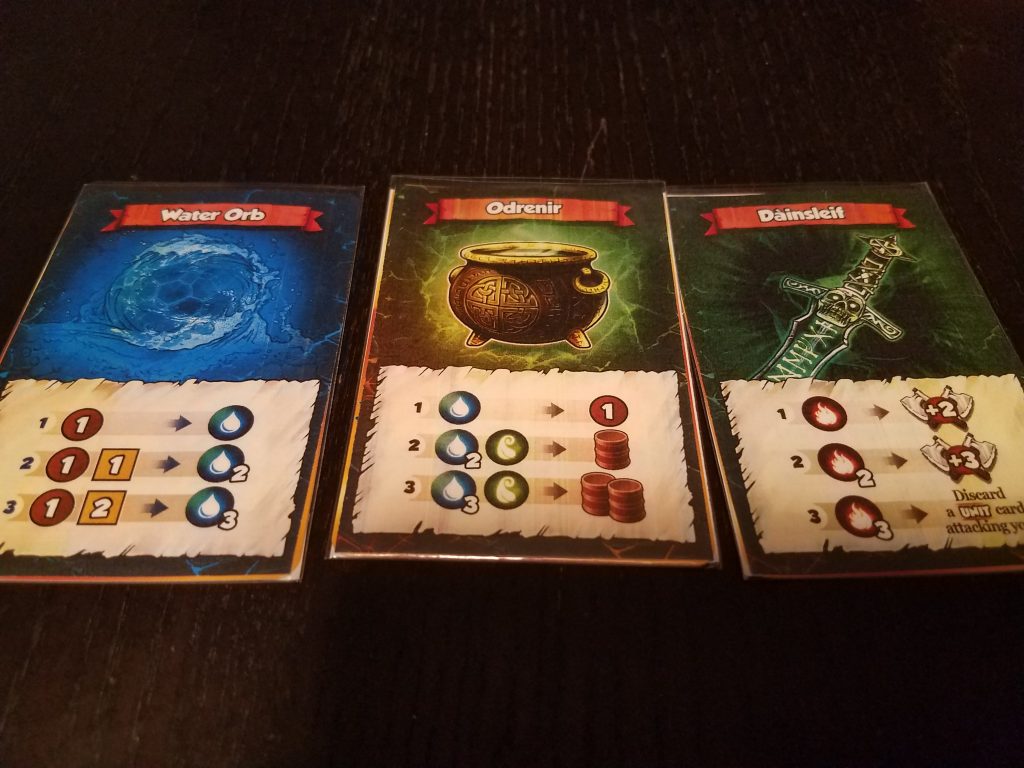 At the beginning of each game of Masters of Elements, players will draft 3 Artifact cards.  These items of mythological significance grant players a variety of bonuses and abilities, most paid for with Element tokens (though some cost beer or gold).  Each artifact has 3 levels, and upgrading your Master of Elements is the key to getting access to these higher tier abilities. 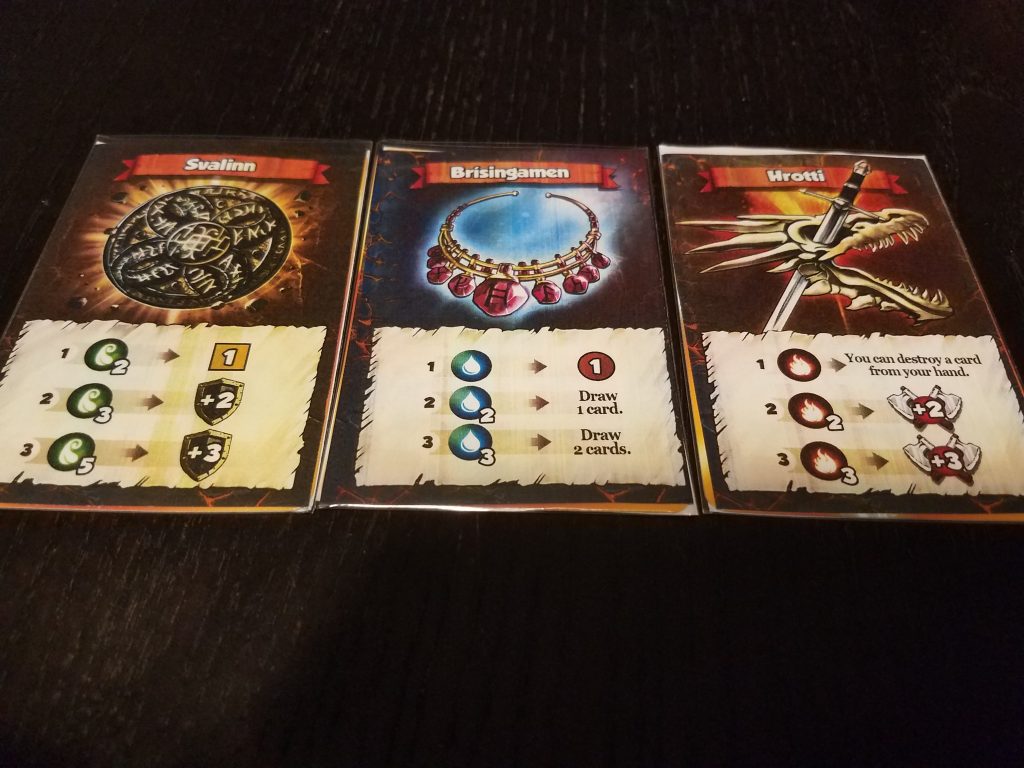 Jess:  Here’s where things get interesting!  By using Element tokens to power up artifacts, you can do some really cool combos, like adding resources or boosting attacks or defenses.  While each artifact has a relatively narrow focus of abilities, the variety will help you craft an overall strategy as you play, essentially giving players variable player powers.

Andrew:  I agree, this aspect of the expansion is good.  With some luck and planning, artifacts can be an integral part of your strategy, and something on which you can build cool combos or make bigger plays than your normal deck building progression might allow. 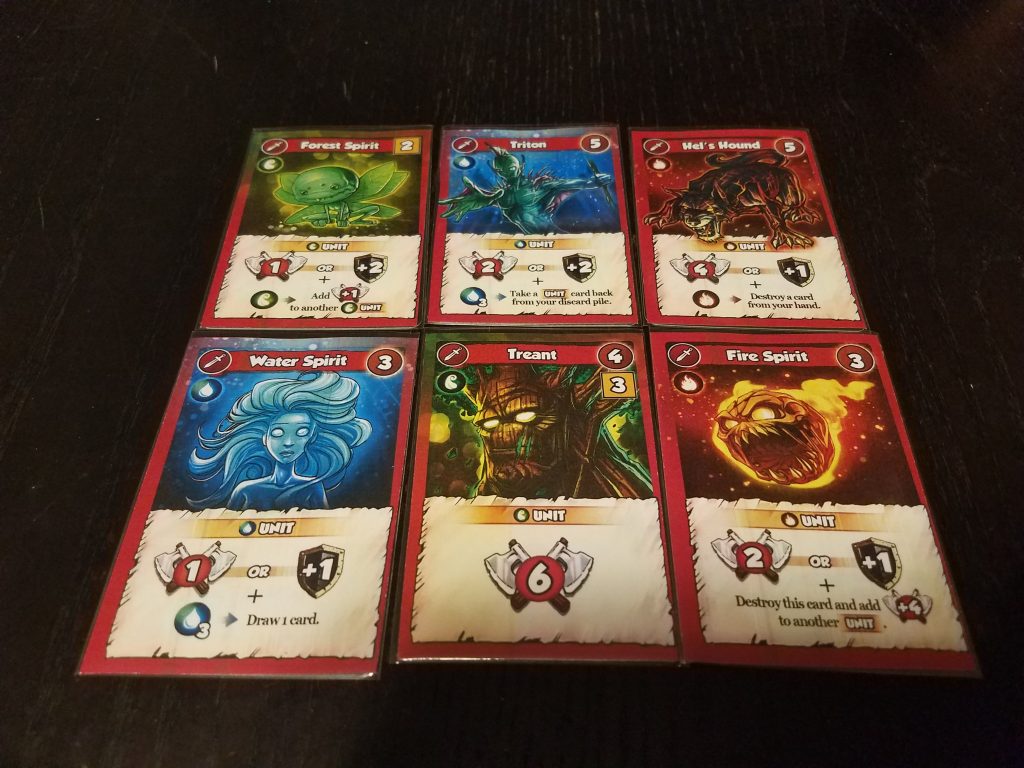 Vikings Gone Wild featured cards which could be added to your deck that either helped you attack opponents’ structures or defend your own from the aggression of others.  However, while we absolutely loved the fact that getting successfully attacked didn’t cost you anything (you didn’t lose so much as allow your opponent to gain points), the fact was that it sometimes became very easy to simply ignore defensive cards altogether, since they only helped if you happened to be holding them in your hand on the same turn you were attacked.

Masters of Elements addresses this issue with a whole new roster of hireable help for your deck.  These creatures (with a few exceptions, like the mighty Treant who just hits like, well, a tree) all feature both attack AND defense, making them far more versatile (and more likely to be useful).  Add to that the fact that most of these creatures also have extra effects which can be triggered with the right combination of Element tokens, and the deck-building component of Masters of Elements is more engaging than ever!

Andrew:  This was probably my favorite part of the expansion.  Previously, it really was possible to simply absorb attacks, focusing instead on making your own deck as aggressive as you could manage.  By adding the defensive option to basically all creatures, Masters of Elements gives me a more meaningful choice every hand – do I spend this card for attack, or hold it in reserve to buff my defense?

Jess:  Right!  By making that a turn-by-turn choice (as opposed to having to decide whether we purchase a card that only does one or the other), it adds depth to the interactions and gameplay.  And Elemental boosts are icing on the cake, letting you pull off big plays and sudden swings!

Masters of Elements adds plenty to the base game.  A few extra end-game scoring cards, some new heroes, and a whole mess more quests add longevity and interest to the already-fun Vikings Gone Wild.

Jess:  The bottom line is simple, really – Masters of Elements adds a few really fun, really interesting little twists to the original’s formula.  The extra currency does occasionally bog down the turn-by-turn gameplay just a bit, but for folks who really liked the original Vikings Gone Wild, Masters of Elements is probably a no-brainer addition.

Andrew:  I agree on all points.  Introducing another resource to a game is always a bit of an adjustment, but ultimately I think Masters of Elements makes up for that with its increased opportunities for strategy and interesting plays.  If you like Vikings Gone Wild and want just a little more meat on the game’s bones, then Masters of Elements is definitely a good expansion for you.  It adds just enough to keep things interesting without completely changing the core feel of the game.

The Masters of Elements Kickstarter is now live!  If you’ve got a hankering for some more Norse deck and tableau building with fantastic art and smooth mechanics, definitely check it out!

(Gameosity was provided with a prototype for this preview, with the option of requesting a finished version of the game.  We were not otherwise compensated.)