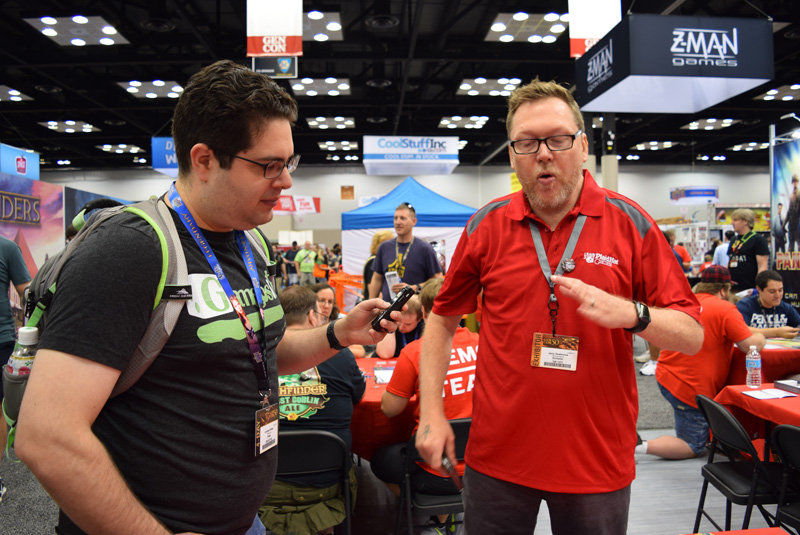 Plaid Hat Games has a couple of exciting titles coming out this year including Stuffed Fables, Starship Samurai, and Crystal Clans. Let’s take a look at them! 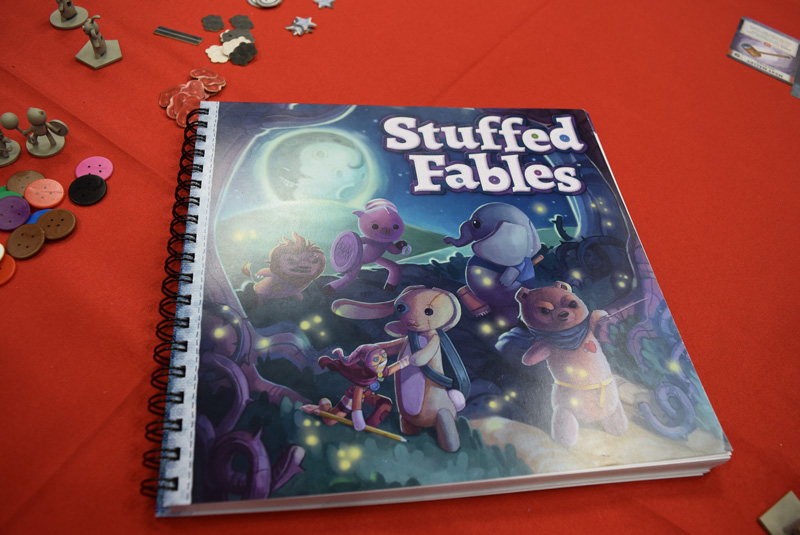 Stuffed Fables, a game where a little girl’s toys protect her from monsters throughout the night. Designed by Jerry Hawthorne, of Mice and Mystics fame, Stuffed Fables is a cooperative dice-rolling game for 2-4 players. 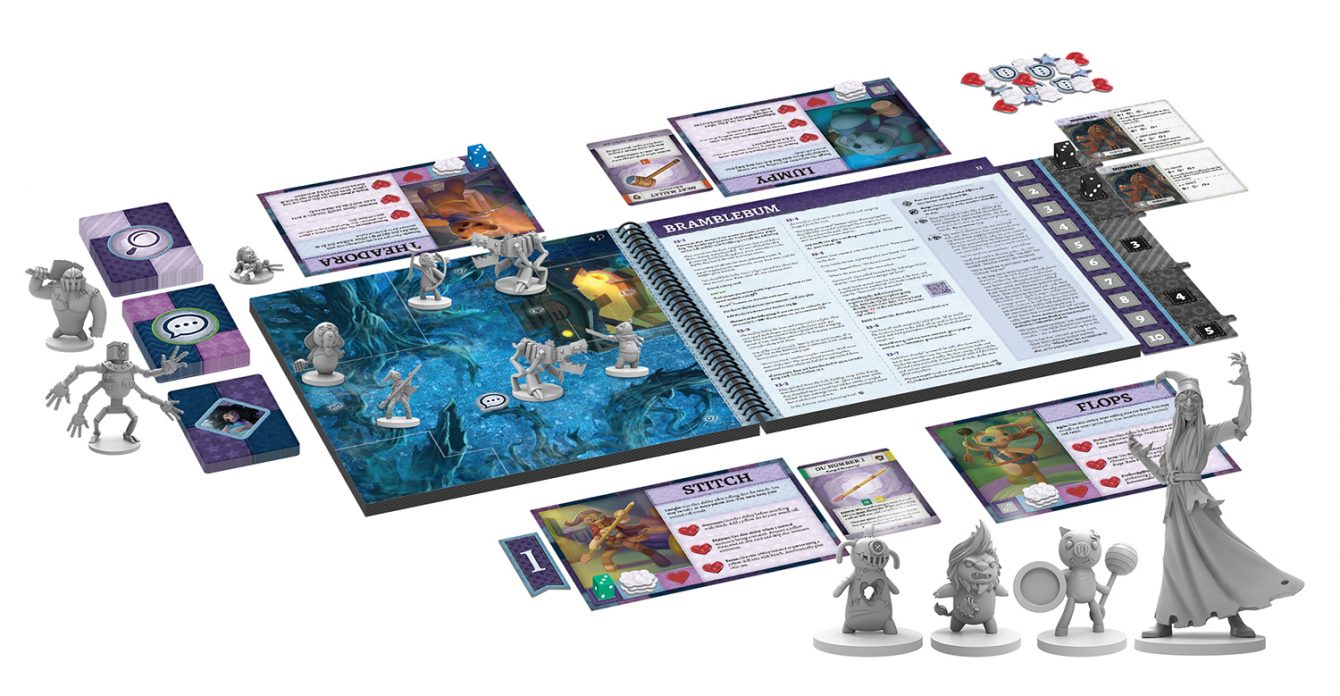 The toys fight against the evil Nightmare King through a tale that you explore in the storybook. Each adventure constitutes 1 milestone night in the little girl’s life, such as night 1 where her parents take down her crib and she gets to sleep in a big girl bed for the first time (a harrowing experience in any child’s life).

The adventures are unique and can often have special rules to play by making each game different, but the basic idea is that every turn you’ll be drawing dice from a bag. The colors of the dice determine the actions you can take; for example: white dice heal your stuffies, red dice are melee attacks, and yellow dice perform search actions. As you play, you may draw black dice which are placed on a track. If you draw too many the Nightmare King’s minions will attack! 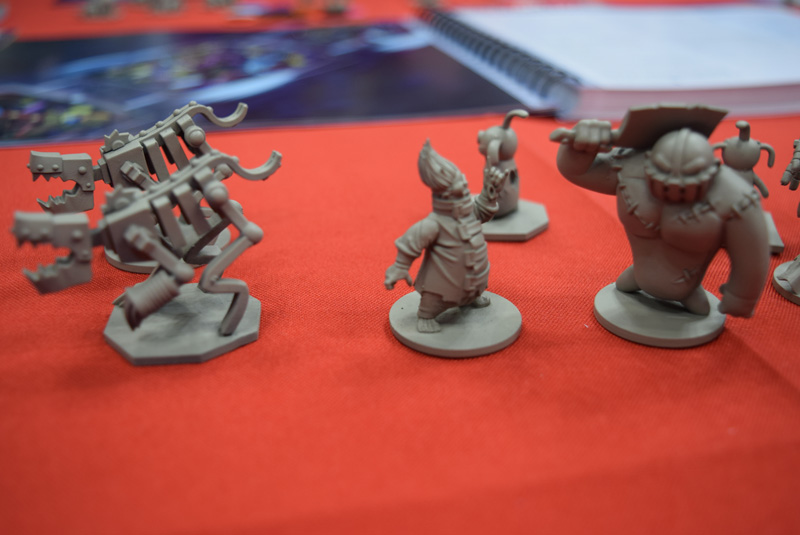 Some of the Nightmare King’s Minions
Jerry designed the game not only to be fun for adults and kids alike, but educational as well. The game has everything from shape recognition to reading comprehension.

Jess: I’m particularly impressed by the adventure book. It has over 100 pages packed with exciting little adventures that pair with a “Discovery” deck to keep things fresh. Stuffed Fables looks like it is going to be a great family game.

Andrew:  I’m absolutely psyched about this one – there’s a gentleness to the theme (at first) that really draws you in, and the gameplay looks like it’ll be fun and engaging.  It may be aimed at families, but I suspect there will be plenty for gamerly-types to enjoy here.

Stuffed Fables will be coming out later this year and will retail for $59.95. You can pre-order a copy from Plaid Hat Games here: plaidhatgames.com/games/stuffed-fables 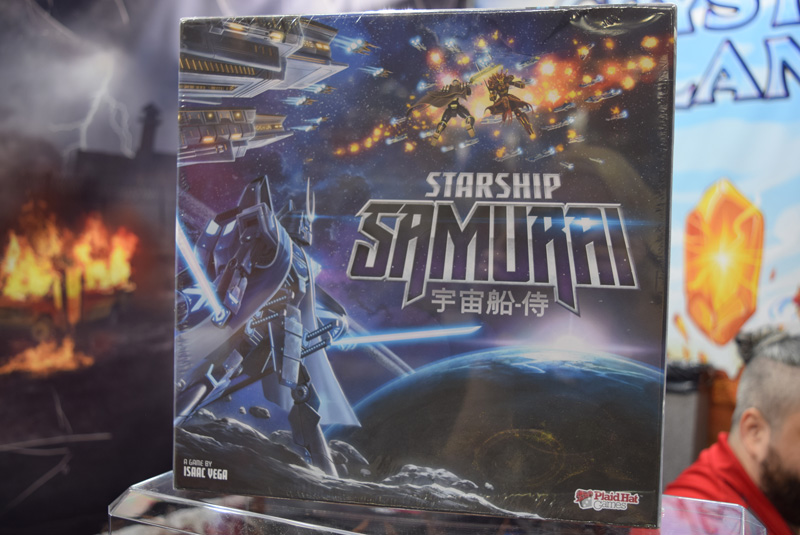 Isaac Vega, creator of Dead of Winter and Ashes: Rise of the Phoenixborn, has a new title in the works called Starship Samurai. In it you’ll get all the action and adventure of a giant-mechs-in-space anime.

Jess: Plaid Hat was only showing off the minis from the game so far, but boy do they look great! I’m really getting a Gundam vibe from these. We don’t know anything else about the game yet, but I’m already excited! 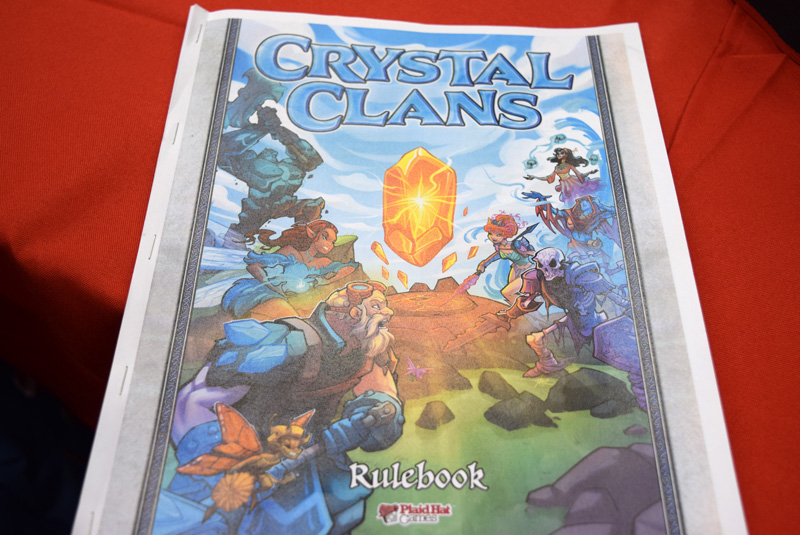 Designed by Colby Dauch, J. Arthur Ellis, and Andrea Mezzotero, Crystal Clans is a 2-player expandable game. In it you’ll battle your opponent with an army from one of the 6 clans: Water Clan, Flower Clan, Skull Clan, Blood Clan,  Meteor Clan, or the Stone Clan. As you fight you’ll earn magic crystals that have the power to benefit you in the fight. The first opponent to gain 4 crystals wins! 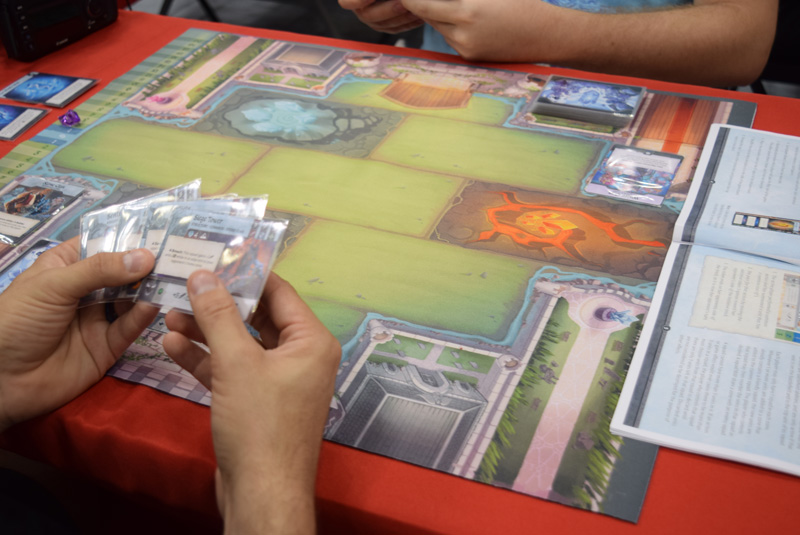 Crystal Clans is due out this fall. I like a good 2 player game as it is usually Andrew and myself playtesting most games, so I’m hoping we’ll have a chance to check this one out. You can learn more about it at: plaidhatgames.com/games/crystal-clans

Andrew:   Looking forward to checking this one out, for sure.  Crystal Clans had echos of Summoner Wars (to me), and I ‘m really interested in seeing what makes this game unique.  The art direction is awesome and the board looks great on the table, so I’m really excited to get our hands on it!