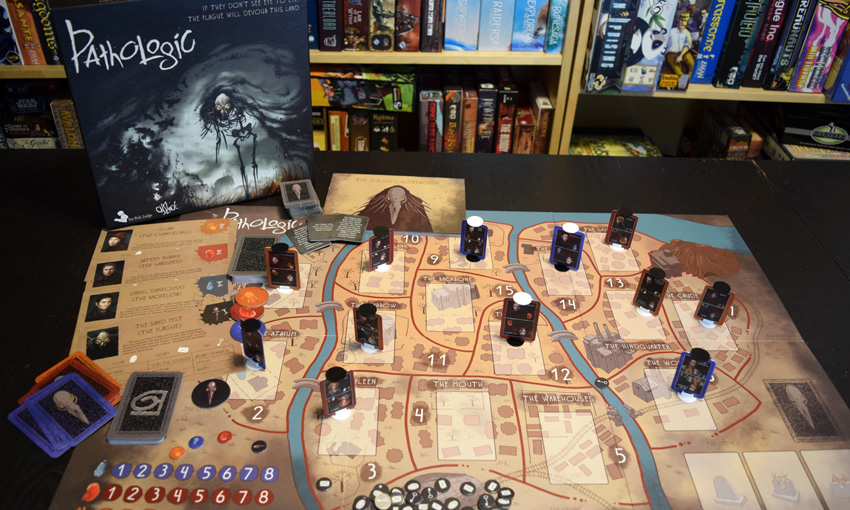 Pathologic is a really unique attempt to distill a video game of the same name (which itself enjoys something of a cult following) into cardboard form.  How successful you find this effort is more about how much you value the overall atmosphere of the game, rather than the actual mechanics themselves.

Based on a relatively obscure PC game of the same name, Pathologic is a unique creature, to be sure.  An asymmetrical game for up to 4, it incorporates stealth movement, variable player powers, 1-vs-many, and other gameplay mechanics into a bit of a bizarre melange intended to simulate some approximation of the exploration and social elements of the source material, wherein several characters find themselves in a town being threatened by a deadly plague.

Jess:  So, right up front we have to put this on the table – we aren’t really familiar with the video game it’s based on, so we’re going to be discussing Pathologic strictly in terms of itself, rather than trying to assess how successfully it manages to convey the core concepts of the source material.  So fans of the cult-classic Pathologic game please keep that in mind!

In Pathologic, one player will take on the roll of the Plague, with up to 3 other players being the healers.  The board depicts the beleaguered town, divided into various districts, and holds player pawns for the 3 healers and their associated wards (people of note in the town’s social structure).  Interestingly, the Plague does not appear on the board – its movements are tracked by the player controlling it via notebook and pencil, and its presence in the town is only felt when it kills someone.

Andrew:  So, right off the bat, I was interested in this idea of an invisible plague, moving around and manifesting suddenly (and lethally) from the shadows.  In a lot of games with hidden movement, it’s cat and mouse – the stalker may be dangerous, but knowing where they are let the other players defeat them or whatever.  Not quite so in Pathologic, where the only thing the healers can do with the knowledge of the Plague’s whereabouts is to play keep-away with wards.

The goal of the healers is to convince the town that their method of addressing the Plague will succeed.  However, their cures are mutually exclusive, so while none of the healers want the Plague to win, this isn’t even vaguely a cooperative game.  The goal of the Plague is to either kill 3 specific wards (chosen at random at the beginning of the game) or to stymie the healers long enough that they simply cannot succeed.

In order to accomplish their goal of gathering evidence, healers will engage the randomly-drawn events around town.  Events frequently cause some negative board condition, and a healer that resolves an event gets some evidence toward the 8 they need to win.  Resolving events is simply a matter of having the required resource (Secrets, Money, or Key), or by deploying a ward who specializes in that resource.

Jess:  We have to back up here and talk about the wards.  This was both the most interesting and most frustrating part of the game for me, I think, and it bares some discussion.

Each Healer has 3 wards associated with themselves, one of each resource type, in addition to their healer piece on the board.  Now, you might be tempted to assume that a player can use their wards as proxies for resolving events and gathering resources, and you’d be right.  However, in Pathologic, a player can use any ward on the board when they are the active player, not just ‘their own’.

Andrew:  That’s really interesting, because it means that on my turn, I might bring a ward out of quarantine (a protected state that makes them difficult for the Plague to kill but also unable to do anything) in preparation for using them to resolve an event.  However, nothing stops the next healer from using that same ward to move or gather a resource or whatever.

And while the most efficient way of gathering evidence is to send your wards (events resolved by your own wards gather 2 evidence, whereas events resolved by your healer piece or other players’ wards only gets you 1), you will most certainly want to make tactical use of your opponents’ wards to do the dangerous work of resolving events – after all, you only incur a penalty when the Plague kills your own wards… 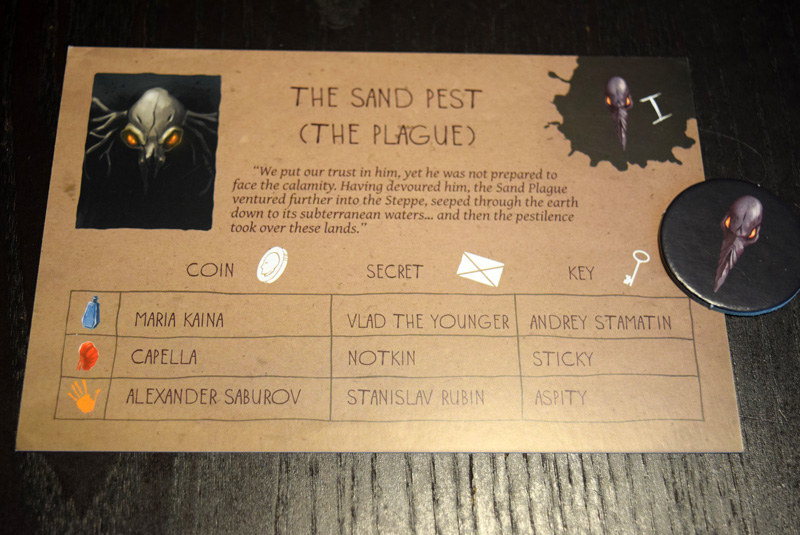 Jess:  What was frustrating about this was the fact that player order never varies.  So in one of our games, I was always the first healer to act, and so I frequently had to do set-up tasks, like un-quarantine and move wards into position.  Other players could then really easily take advantage of my work, especially since each player piece can only act once per turn.  Inevitably, they either ended up using my prep work to accomplish things themselves or getting killed off by the Plague, and I never felt like I was really able to do anything meaningful.  I mean, I could always have just done, you know, nothing, and forced the next healer to do some setup work for me to take advantage of, but that felt incredibly boring.

Andrew:  Totally.  While I think it’s fascinating from a strategic perspective, the whole ‘communal player pieces’ aspect of Pathologic can make you feel a little detached – you don’t really have a ‘team’, and if the Plague manages to kill off a couple of ‘your’ wards, your ability to gather evidence gets considerably hampered.

We realize at this point that, over 800 words into this review, we haven’t really talked in detail about the mechanics of Pathologic, and the reason for that is, well, they’re simply not that interesting.  The mechanics themselves are surprisingly straightforward – the slow-moving Plague stalks in secret, killing wards and forcing healers into quarantine, all the while gunning for its hit list of 3 wards in order to win.  The healers take take turns, each player taking 2 actions on the board, with access to their own healer and all the wards as pawns.

No single piece can take more than one action per turn, however, so gameplay tends to be methodical and paced, with the issue of accidentally setting up your opposing players showing up pretty frequently.  You can’t, for example, move a ward and resolve an event with that ward on the same turn. 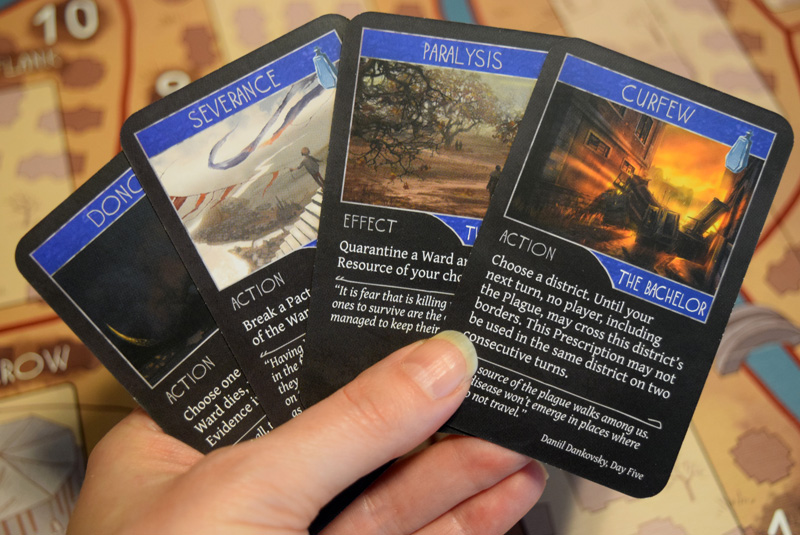 Andrew:  The problem I kept having, I think, is that the healers’ main opponents are absolutely each other – aggressive use of each others wards, strategically undoing another player’s efforts, or just plain stealing the successes another player is trying to set up are actually key to winning Pathologic.  The Plague role, which was what attracted me to the game initially, really doesn’t feel dangerous or powerful – the Plague is really just an opportunistic killer, hopefully in the right place at the right time to infect the wards it needs to kill in order to win.  When I played as it, I never felt like a terror, more of a scavenger, and it hit a disharmonious note for me.

Jess:  And the fact that there were plenty of turns you would spend just taking your one movement and then sitting there, hoping for a healer to slip up and expose a ward you needed to kill?

Andrew:  That didn’t help my experience, no. 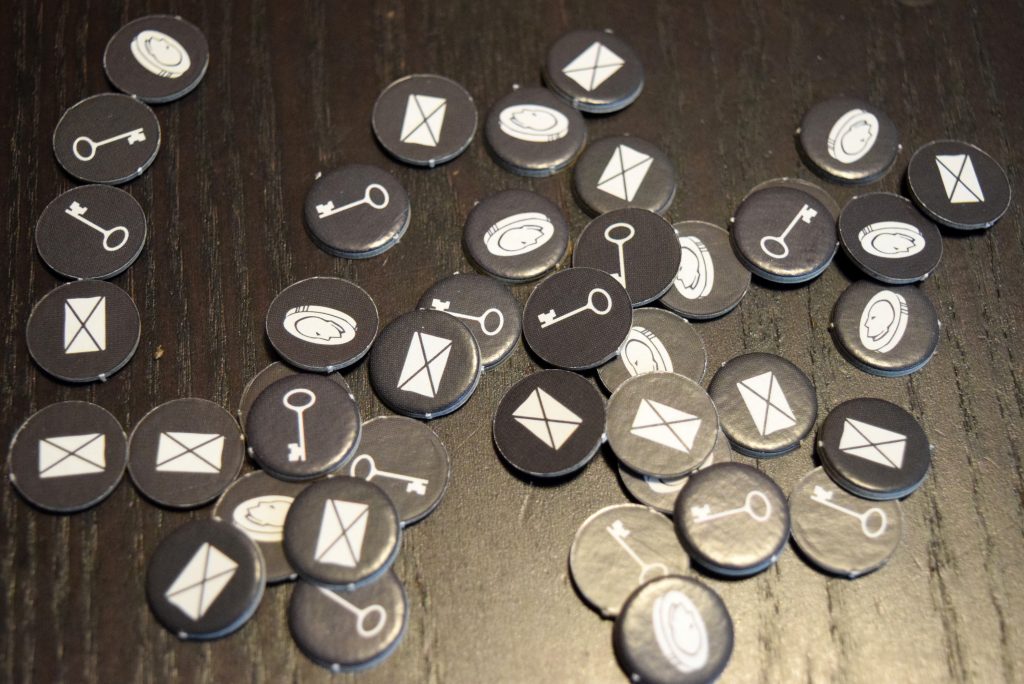 Ultimately, it is the healer who manages to gain 8 evidence first who wins, unless of course the Plague manages to complete its murderous shopping list of 3 specific wards and wins the game itself.

There are other aspects of Pathologic’s gameplay we haven’t touched on – each player has a unique deck of Prescription cards which let them change the board state or create special effects, like tagging a ward to give them evidence when they die or stopping the Plague from gaining bonus movement, etc.  The Plague also gains Strain tiles, which it can leave like viral landmines as it moves across the board, creating negative effects when they are encountered by healers.  Each healer can also create a pact with a single ward, essentially removing them from the communal pool and making it so that only they can use that ward.  But again, we found these mechanical nuances added little to the per-turn decisions we were making, and rarely created moments of excitement or interest.

Jess:  So in case it wasn’t clear, Pathologic really wasn’t a game for us.  We played it at different player counts, and I ironically liked it best at 2, where it was just a game of cat and mouse between the Plague and a single healer, and not about the healer players undermining each other.

Andrew:  Yeah, I can’t help but agree.  For me, Pathologic simply wasn’t that engaging.  The Plague player is mostly passive, and healer turns can take a long time since one needs to consider not only the entire board state, but what state you will leave it in (since the next player will assuredly take advantage of any setup work you’ve done).  Despite all that consideration, it never quite felt like there was a lot actually going on in each of our plays.

We’re certain that Pathologic is a labor of love – we feel like the folks who designed it didn’t want to just slap the Pathologic IP on an unrelated game engine and were clearly trying to manifest this unique video game in the form of a unique board game, and we widely applaud them for that attitude and vision.  More publishers need to take this approach when tackling existing properties, so that we simply don’t have cheap reskinned versions of mass-market board games.

Unfortunately, uneven pacing, unengaging gameplay, and a lukewarm player experience make this one a no-go for us.  While we deeply appreciate its efforts, there is something here which simply feels lost in translation.

If you’d like to judge for yourself if Pathologic is a game for you (and especially if you’re a fan of the video game and are interested in checking out this absolutely unique take on translating it to a board game), Pathologic can be ordered directly from its designers here.