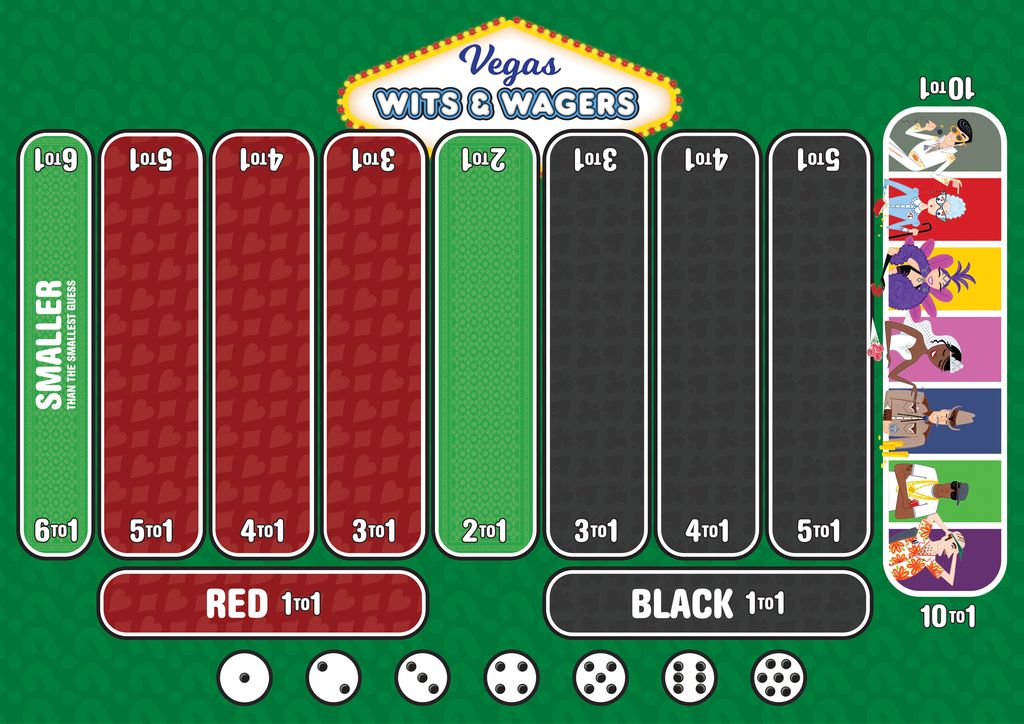 Building on the success of its previous iterations, Vegas Wits & Wagers is, simply, the definitive version of this light, accessible, extremely fun party game.  If you're looking for a no-brainer to add to your 'party game' toolkit, look no further than this.

The original Wits & Wagers does something really interesting for a party-style trivia game – It doesn’t really punish you for having no idea what the answers are to its questions.  Instead, points are made by betting on which team’s answer is closest to correct without going over.  It’s a simple idea that results in a really accessible, fun big group game that basically anyone can play, and that’s great!

But up on Kickstarter right now, Vegas Wits & Wagers adds a TON of excitement to the already-enjoyable base game, in the form of expanded betting options, bigger point swings, and some really awesome (and appropriately deluxe) components.  Come join us as we check out a Kickstarter preview of Vegas Wits & Wagers! 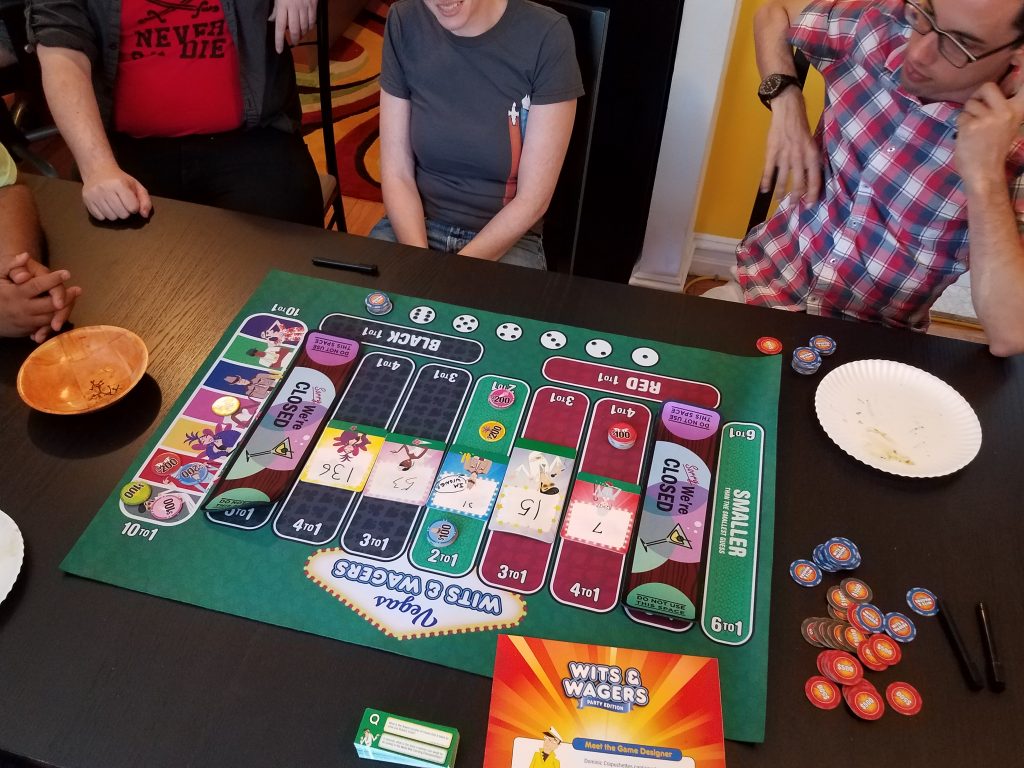 In Vegas Wits & Wagers, each round will see a question asked to the group.  These questions are from all different kinds of subjects, but all the answers will be numbers.  Then, each team (the rules say teams can be between 1 and 3 players, but honestly, the sky’s the limit) will make a single guess at the answer, writing it on their dry-erase team board. 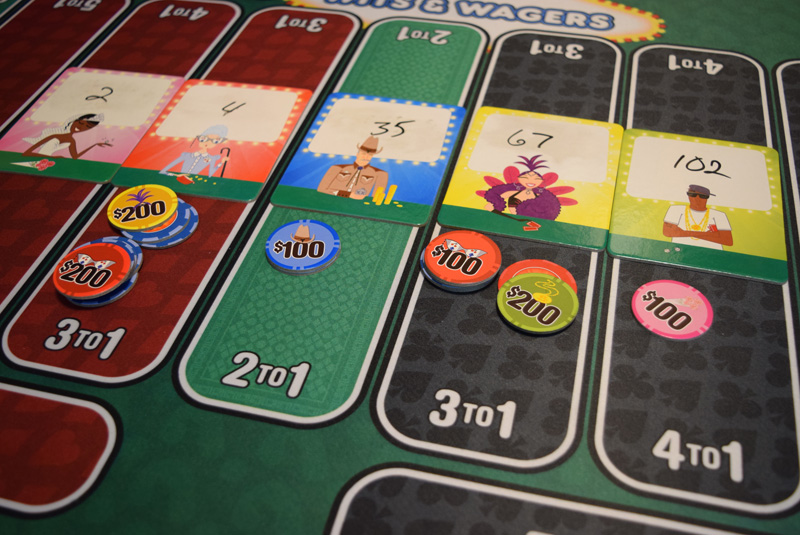 Andrew: But before the guesses are revealed, Vegas Wits & Wagers’ gambling inspiration immediately make an appearance.  Each team can place a single blind bet on which team’s answer they think will be correct.  Knowing nothing more than who made the guess, you can make this high-stakes bet, possibly getting the best pay-out on the table.

Jess: I love that!  It’s such a ‘play the players’ moment.  Do you know your friends are experts in a subject?  Bet on them and potentially win big!  Or maybe bet on your own team, either out of sheer confidence or as a misdirect to get other teams to do the same when you know you got it wrong. 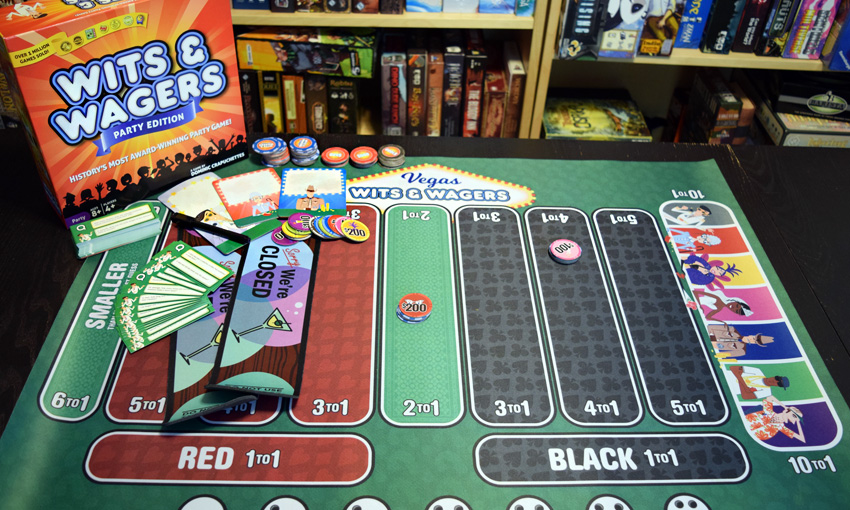 After all the high-stakes betting is done, guesses are revealed and arranged, and teams get another round of betting.  Unlike the original Wits & Wagers, Vegas Wits & Wagers lets players bet on not only which team is right, but also on a range of possible right answers (red and black, a la roulette). 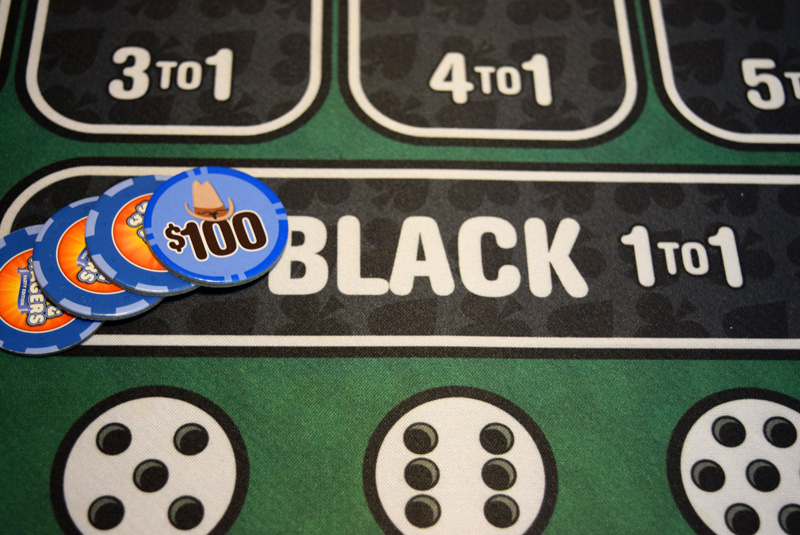 Each bet has slightly different odds, and clever betting is way more important than trivial knowledge.  Once all the bets are down the answer is revealed, and anyone who got it right gets their payout!  Team with the most cash at the end of the 7th question wins!

Jess: As trivia games go, the original Wits & Wagers (and its spin-off ilk) are actually really smart – as we said, they let you engage even if you don’t know exact answers.  Of course, if you’re as bad at estimating as I am…

Andrew: Still doesn’t matter, because it’s more about identifying the right guesses than making them yourself.  And in Vegas Wits & Wagers, that’s only amplified because of the expanded betting options. 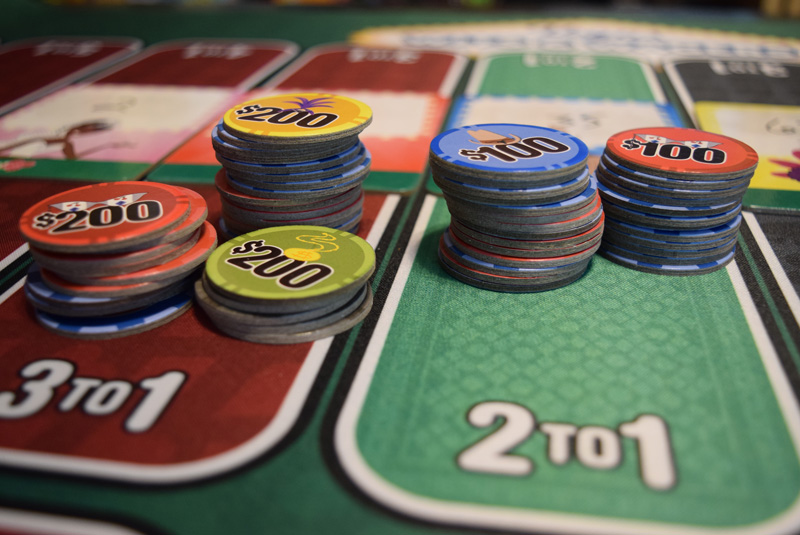 Vegas Wits & Wagers is a fantastic party game.  Team play means groups of mixed ages can easily play together, and the quick, light gameplay keeps the pace moving.  While the original was fun, Vegas Wits & Wagers really adds a lot of fun table moments with more opportunities to bet and win (or lose) big.

Jess: The components are appropriately deluxe for the theme – when we saw it at Gencon, I was sure that the giant mat was made specifically for the convention, but nope!  That’s the actual board! 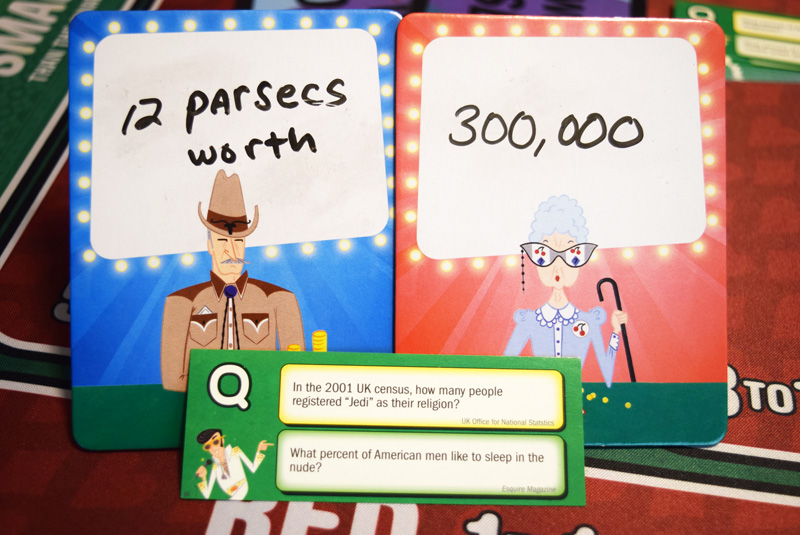 (Gameosity received a prototype for this preview, with the right to request a finished copy.  We were not otherwise compensated.)