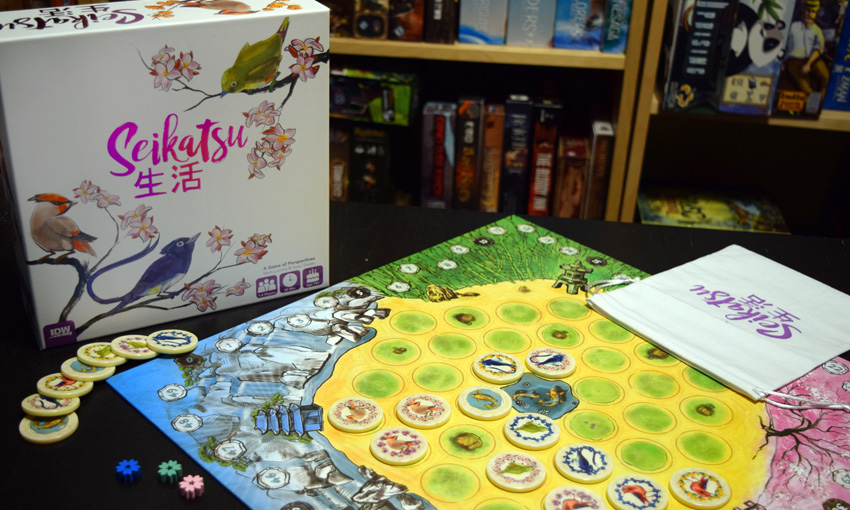 Seikatsu is a beautiful abstract game with some unique scoring mechanics to add just a touch of complexity to the patter-building nature of its tile-laying gameplay.  Add to that gorgeous production and intuitive mechanics and you've got yourself an excellent, light game.

Jess: Seikatsu (生活) is a beautiful abstract game of harmonious gardening. Players work to build a shared garden between their 3 pagodas, but everyone is trying to make sure that their view of the garden is the most spectacular.

Andrew: Immediately, I just want to say that Seikatsu is an attractively-produced game.  The board is bright and colorful and the tiles are chunky and solid, with a great feel and a satisfying weight.

Jess: Yeah, absolutely!  As pasted-on themes go, this one is definitely pretty. Usually I don’t go for abstract games, but the look of Seikatsu really drew me in.

Seikatsu’s board depicts the gardens surrounding the central koi pond, and each game begins with tiles randomly placed on the starter spaces.  These tiles form the beginnings of your beautifying efforts, and on each turn players will place a single tile from the two they hold in hand, drawing back up to two once they’ve done so.

Each tile depicts one of two scenes.  The most common is that of a bird surrounded by flowers.  The second, far less common tile is another koi pond.  The difference between these tiles is how they score. 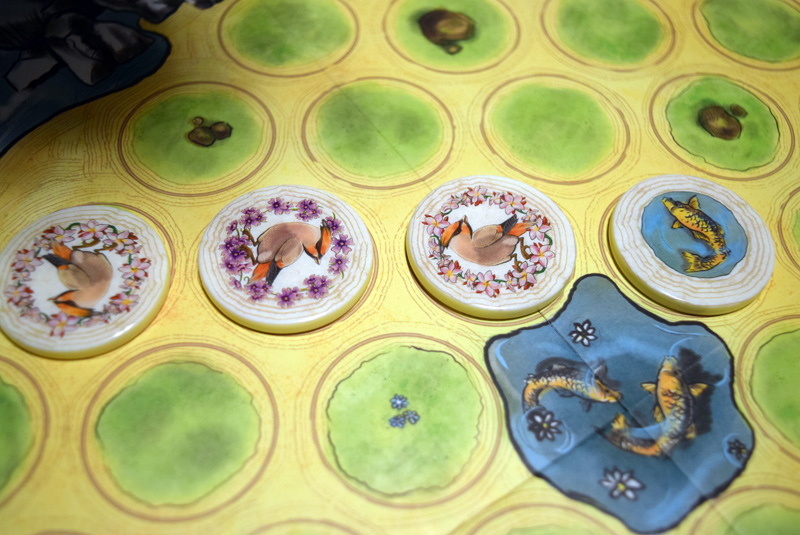 Scoring in Seikatsu can occur both during a player’s turn and then at the end of the game. During your turn, you will score a point for every matching bird (irrespective of the flowers that adorn them) that is connected to the bird you are placing (this is a ‘flock’). So there is strategic worth to making contiguous blocks of identical birds, but keep in mind that your opponents’ placements can also benefit from these flocks. 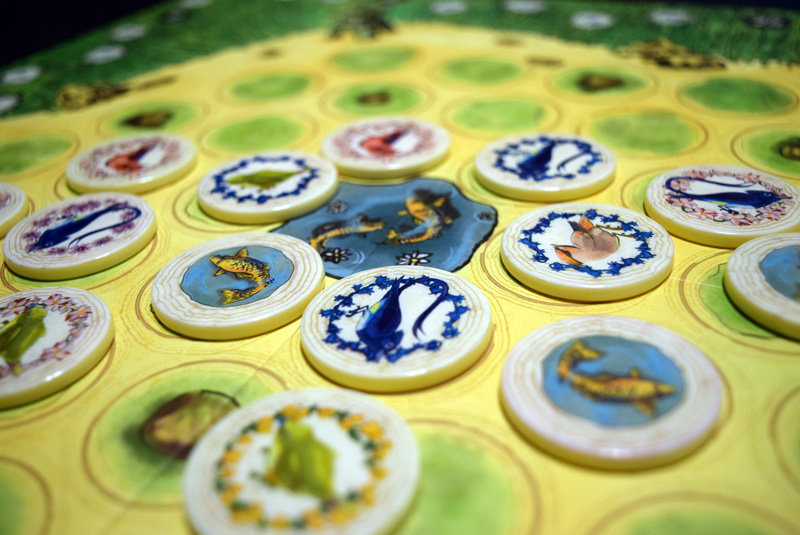 At the end of the game, you will score additional points based on the view of the gardens from your pagoda.  For each line of tiles, you will score points for the flower type most common per-row. These bonus points add up quickly, and can certainly swing a game in the end.

Koi tiles act as wilds, both when they are placed and at the end of the game. When a koi is placed, it acts as any bird type to score for a flock (though it only does this when placed, and no longer adds to any flock’s size thereafter). At end-game scoring, each player can count koi ponds as the flower type of their choice when they are determining set bonuses. 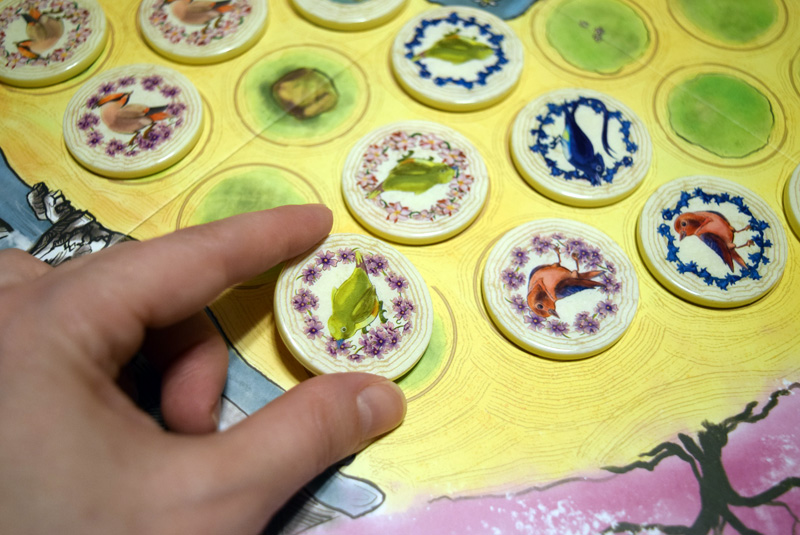 Jess: Seikatsu is extremely light – each turn boils down to picking one of two tiles and where you will place it. However, light doesn’t mean without strategy. I think it’s really clever how each placement will affect every player’s end-game bonus, so you need to look at the board from every player’s perspective.

Andrew: Absolutely! And then you’re also choosing between placing tiles to create and score large flocks of birds versus the value of stacking rows of flowers for the end. Seikatsu gives you minimal decisions to make, but you’ll do best when you spend some time thinking about both immediate and long-term strategy.

That said, Seikatsu is delightfully quick – 2 or 3 fairly decisive players can probably get the whole thing done in 20 minutes (or less, honestly). The scoring makes the player count a little wonky – it plays great at 2 or 3. 4 players will require you to break into two teams, and there is a solitaire mode which has you taking on the unique puzzle of competing against the scores of the other two pagodas – you’ll need to be extra-attentive of how your tile placements set up the scores of your opponents.

We really enjoyed Seikatsu – if you’re looking for a light, accessible, beautiful, and quick abstract, then it’s absolutely worth checking out.