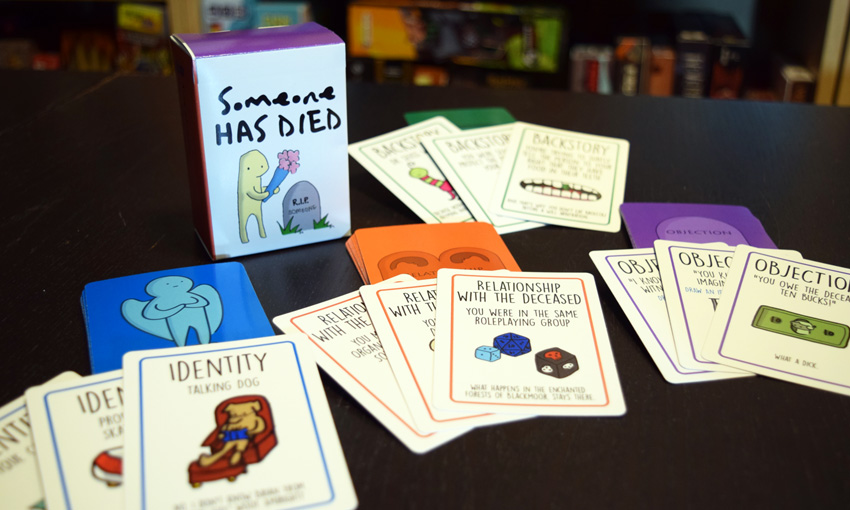 
Last week on my Fav Five Kickstarters list I mentioned a party game called Someone Has Died. I’ve been watching it for a while now since the creators introduced it to me at the Indie-Mega Booth at Pax East last year. It’s a quick, silly game of will arbitration.

Jess: Stay with me here. I know the words “will arbitration” are not profoundly exciting, but I have never steered you wrong on lawyer games. Remember High Treason?

In Someone Has Died, as you might suspect, someone has died and it is up to the estate keeper to decide on a worthy inheritor to claim the goods left behind.

The game is composed of 4 decks of cards: identities (blue), relationships (orange), backstories (green), and objections (purple). When the game begins, one player will be selected to act as the estate keeper.

The estate keeper will draw an identity card, which will tell everyone who has died, and come up with a story as to how they expired and what riches they left behind (this could be anything from a priceless stamp collection to a a cardboard box that has “Definitely not bees” written on it).

The other players will get a hand of one identity card, one relationship card, and two backstory cards from the deck. This determines who their character is and how they should act during the game.

Once everyone knows who they are the players will go around arguing why they are most worthy to inherit. To win, the players do their best to act out their crazy characters, using the information on all the cards in their hand. As they act out an attribute they will lay down the corresponding card to form a tableau in front of them.

The player’s stories will be complicated as the estate keeper can hand them objection cards. These cards have all manner of statements that will argue against your right to inherit and you must try to talk your way around them. At the end of four rounds of deliberation, the estate keeper will decide who did the best job presenting their case and that player will win the loot.

Jess: “Argument games” are sort of my bane. I’m not a fantastic improv actor and sometimes I get really self conscious trying to come up with interesting facts or characters, but Someone Has Died does a lot of the heavy lifting for you by giving you all the information you need. The only thing you need to do as a player is come up with the connections and be willing to be goofy.

Andrew:  Yeah, This one won’t be for people who aren’t interested in getting into character and roleplaying/fast-talking their butts off, but if that’s the sort of game you enjoy, Someone Has Died is a goofy take on the genre, with lots of fun, oddball elements to mess around with.  Totally worth checking out!

Someone Has Died is on Kickstarter right now. If you like party games and are looking for something quick and silly, go check it out now!

(Gameosity received a prototype for this preview, with the option of requesting a finished copy.  We were not otherwise compensated.)