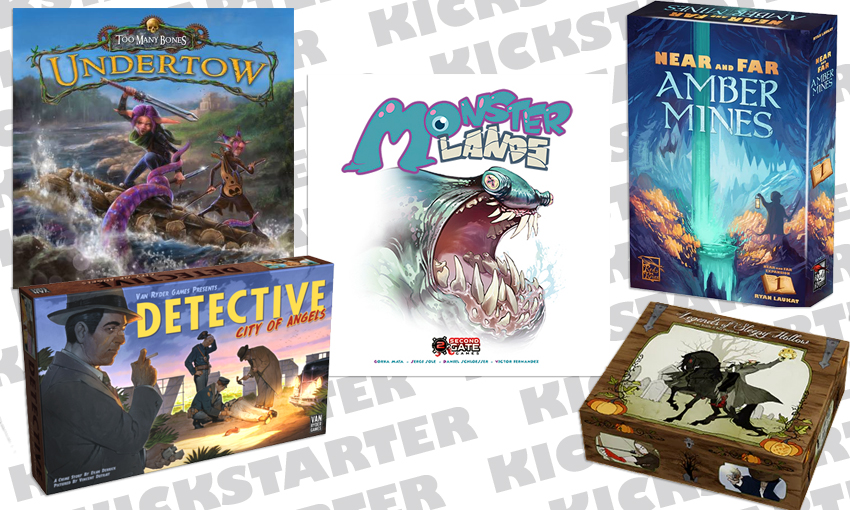 Are you ready for another five awesome Kickstarters? I sure am! Lets take a look at what I am excited about this week!

1. Too Many Bones: Undertow

As many of you know, custom die are like catnip for Andrew. I always keep an eye out for interesting and unique dice games and Too Many Bones: Undertow fits that like a glove. Here we have a game that merges RPG style character building with tactical dice placement and chip-based combat. That’s a lot of words that might not make sense, but let me break it down. 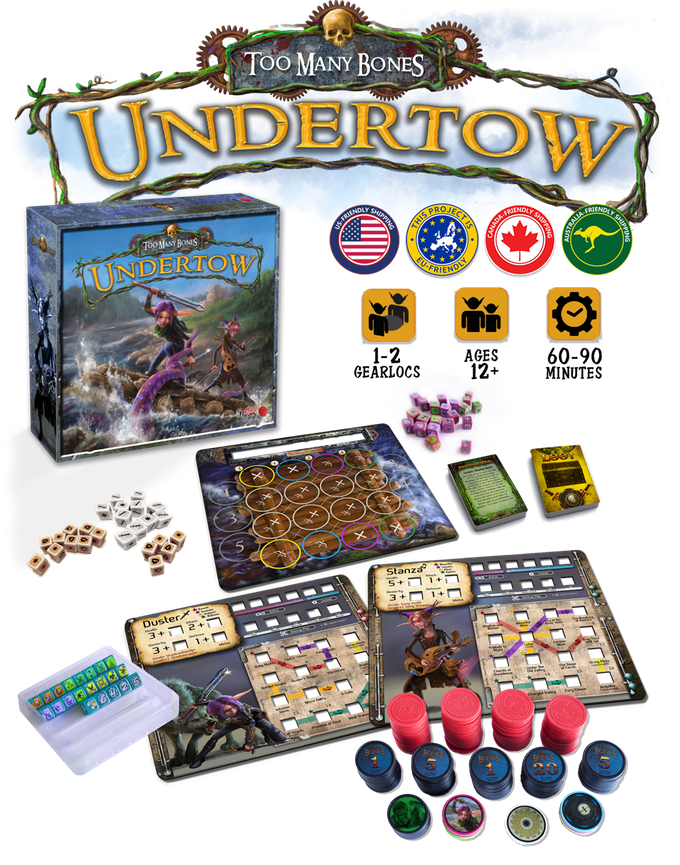 Every player will have a character whose stats are determined by dice that will be added to your sheet or upgraded as you play; overcoming challenges and earning experience. The chips represent your character and the monsters they face. They’ll be placed on the battlefield and the symbols on the chips combined with your character’s skills will determine what you can do and where you can attack. As characters and baddies take damage in a fight, they lose chips and eventually get knocked off the board.

The base game comes with enough pieces for up to a 2 player game and it looks like Chip Theory Games has put a lot of thought into the components (waterproof cards, heat transfer dice, foil decals, etc…). Go check out Too Many Bones: Undertow on Kickstarter here!

I love a good detective noir and Van Ryder Games has put together a competitive mystery game that looks highly thematic and strikingly illustrated by Vincent Dutrait. 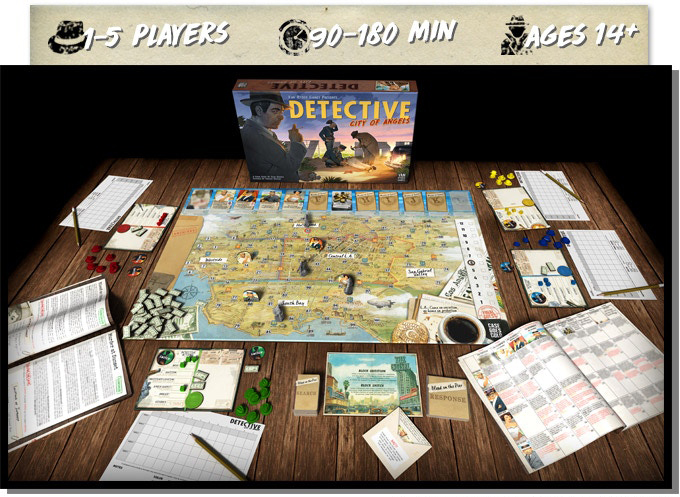 In Detective: City of Angels you are trying to solve a murder before your fellow detectives can. You may need to be a little less than up front with your “co-investigators” to make sure that you find the culprit first, so hiding evidence, intimidating suspects, and paying off snitches is not above you.

The game relies on the ARC (Adaptive Response Card) System that is controlled by “The Chisel”, a player who will decide how suspects answer by changing the orientation of their cards. Detectives can call suspects out if they think they are lying, but if they’re wrong, the Chisel will acquire leverage over them.

I am very curious about this game and just the look of it gives me feelings. If you want to investigate further, take a look at Detective: City of Angels on Kickstarter here.

Returning to dice games for a second, we have Monster Lands, a strategic dice placement game about hunting monsters. Each player will lead a clan of warriors to see who can earn the most victory points by completing missions, fighting monsters, and controlling land. 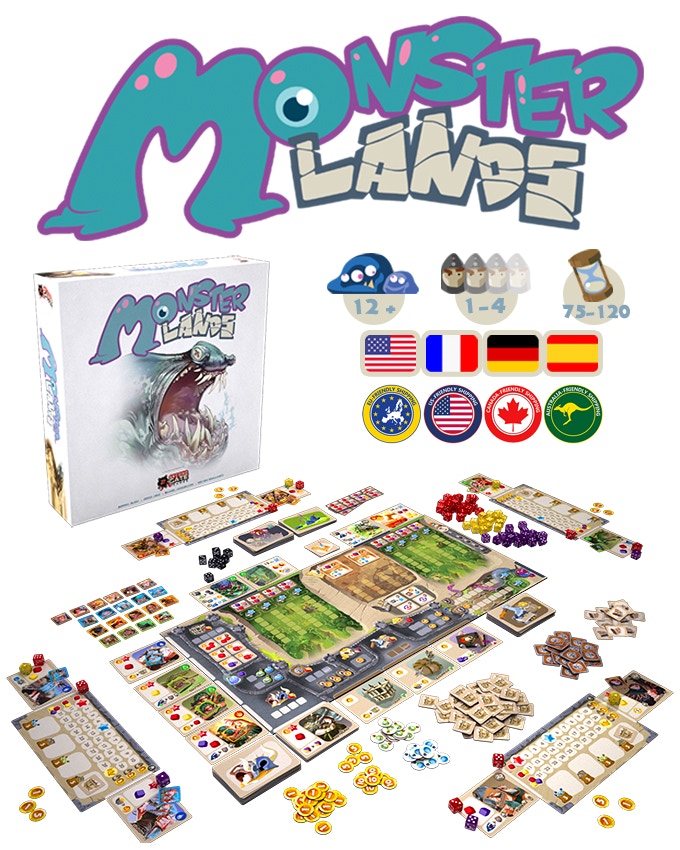 You gain dice from your warriors and use those dice as workers; assigning them to different tasks. Within the Citadel, you can use dice to improve your clan, acquire items, hire new mercenaries, and more. Outside you’ll use those dice to complete missions and battle monsters. You’ll be able to manipulate the dice to make success more likely.

This one looks like a winner to me. It has all the right elements for the kind of game I like, the art is fun and bright, and you can even play it solo. Lead your clan to Kickstarter to learn more about Monster Lands!

4. Near and Far: Amber Mines

Do I really have to say more than this: It is an expansion for a Ryan Laukat game. Go get it! Go get the base game! Go get all his games!… I should stop gushing and actually talk about the campaign.

As you can tell, I’m a big Laukat fan. His games are beautiful, fun, and tell interesting stories. Near and Far the base game is a wonderful culmination of his style into a campaign-esque adventure. This expansion adds new areas to explore, magic spells, a new general store, and new threat cards.

If you don’t own the base game, this Kickstarter offers you the chance to get the deluxe version (which is high-quality and worth it in my opinion). Near and Far is a fantastic game for players who love choose-your-own adventures, roleplaying, and exploration and Near and Far: Amber Mines looks like it just adds more awesomeness to the table. Check it out on Kickstarter here!

Dream team Ben Pinchback & Matt Riddle are back with their new game Legends of Sleepy Hollow. In it, players take on the roles of four residents of this mysterious village and will try to work together to unravel the secrets that lay within. 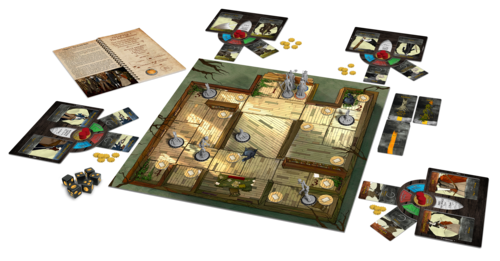 Players will have action points which they can use to investigate, perform actions, and attack with, but used actions cannot be taken again until you exhaust your action point pool. This will get harder to do as your character earns fear tokens, making it more difficult and creating a tenser game as you play.

These guys always put together fantastic games. I haven’t played a Riddleback (don’t tell them I call them that) game that was a dud yet. Legends of Sleepy Hollow looks like it will be a challenging campaign-style game perfect for anyone who love a classic creepy tale.

Get on your horse, don your pumpkin head, and ride on over to the Legends of Sleepy Hollow Kickstarter to learn more!

Which Kickstarters are you excited about this week? Let us know in the comments below!