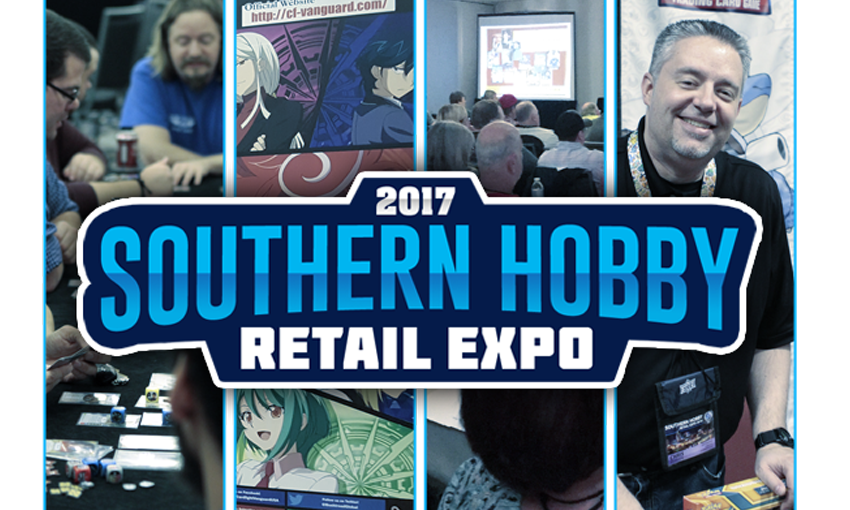 “Southern Hobby Supply’s annual expo is a great opportunity for us to show retailers all the new games we’ve worked so hard to create,” said Adam Sblendorio, Vice President of Creative at Cryptozoic. “We have some amazingly fun games that we think are going to be successful for both us and hobby stores, including Rick and Morty: Close Rick-Counters of the Rick Kind Deck-Building Game, Teen Titans Go! Deck-Building Game, and the third installment of Epic Spell Wars. “

Cryptozoic will show several upcoming games, most of which will be released before the end of 2017: 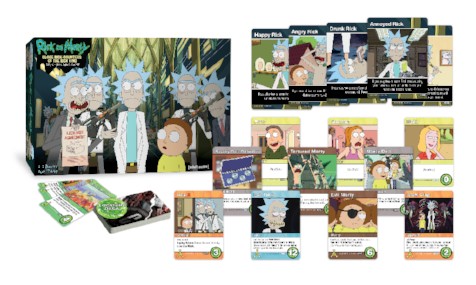 Rick and Morty: Close Rick-Counters of the Rick Kind Deck-Building Game — Based on the Season 1 episode of Rick and Morty that features a multitude of Ricks from different realities, this deck-building game requires 2-5 players to become various versions of Rick and try to take down the Council of Ricks and Evil Rick. The gameplay utilizes Cryptozoic’s popular Cerberus Engine in new ways, as players use Portal Guns to access the otherworldly Location deck, which includes lots of the bizarre places Rick and Morty visit in the hit TV series. 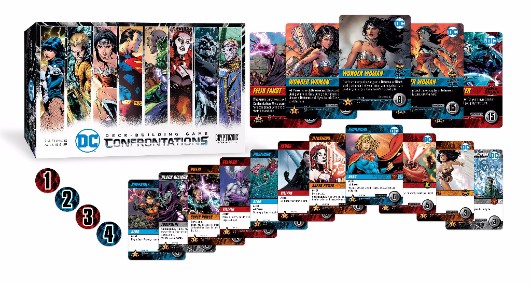 DC Deck-Building Game: Confrontations — Players select a Super Hero (Superman, Wonder Woman, Aquaman, or Zatanna) or Super-Villain (Lex Luthor, Circe, Ocean Master, or Felix Faust) and join another player for an epic clash against two opponents. Assist cards can be played during a teammate’s turn to lend some assistance. Each playable character has three unique versions—when one is knocked down by the opposing team, a player replaces it with the next one, which has boosted abilities and is even more difficult to take down. Though a standalone game, it can also be combined with any previous DC Deck-Building Game for an even bigger experience. 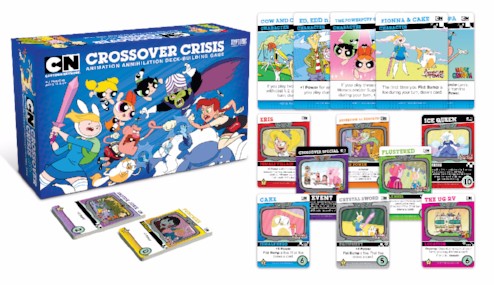 Cartoon Network Crossover Crisis: Animation Annihilation Deck-Building Game — Players take on the roles of Cartoon Network’s greatest heroes—such as the Powerpuff Girls, Fionna and Cake, and Uncle Grandpa—in a friendly competition to vanquish villains like Mojo Jojo, Aunt Grandma, and Ice Queen. The keyword “Wonder” allows a player to play a card off the top of the main deck, leading to all sorts of surprises. The card then goes straight to the Line-Up, so if the player likes the effect, he or she can buy the card immediately. This standalone game is compatible with other Cerberus Engine games, including the original Cartoon Network Crossover Crisis Deck-Building Game. 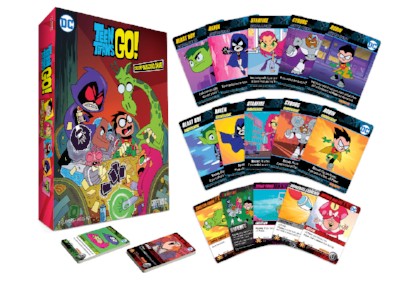 Teen Titans Go! Deck-Building Game – In this two-player game based on the TV show Teen Titans Go!, each player becomes a member of the team—Robin, Starfire, Cyborg, Beast Boy, or Raven—and engages in a friendly competition to take down villains such as Blackfire and the H.I.V.E. Five. Both players start with one Super Hero, but are able to recruit “Sidekicks,” other Titans who can help out. This creates an additional level of conflict, as each player tries to steal away Sidekicks from his or her competitors. Though a standalone game, the game can also be combined with any Cerberus deck-building game to allow more players to join the fun. 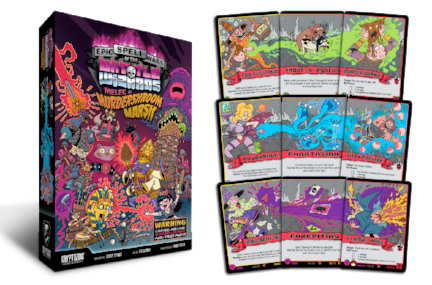 Epic Spell Wars of the Battle Wizards: Melee at Murdershroom Marsh — In the third game of the popular Epic Spell Wars series, players once again create Spells with up to three Components, as they try to destroy opposing Wizards with powerful magic. The game adds two new keywords: Cantrips, which are extra cards that can be added to Spells in exchange for discarding cards, and Bad Trips, which are cards that resolve twice in Spells with lots of different glyphs. Every aspect of the game—from the cards to the rulebook and box—is oozing with the series’s trademark off-the-wall humor and mature, weird art. 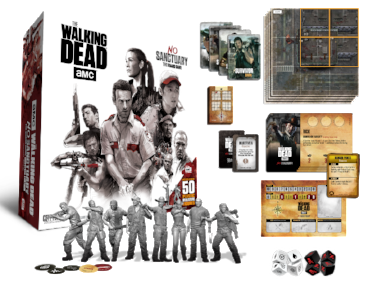 The Walking Dead: No Sanctuary —  The 1-4 player game redefines the survival horror genre with gameplay that emulates the group dynamics from the hit AMC series, as one player acts as the Leader and the other players decide whether to support his or her choices. Designed by the award-winning team of Adam and Brady Sadler, the cooperative game requires players to work together to win as a group, as they take on a multitude of different enemies—both dead and alive—in Scenarios taken directly from episodes of The Walking Dead. The over 50 highly detailed miniature figures include Walkers and fan-favorite Survivors, like Rick, Glenn, Shane, and Daryl. 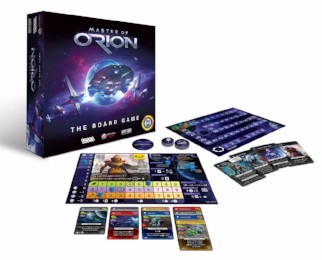 Master of Orion: The Board Game — Utilizing art from the 2016 reimagining of the classic video game, this competitive tableau-building game requires 2-4 players to choose from several races (humans and various alien races), build systems using their cards, and manage their resources in order to win. Victory Points are gained by playing cards, attacking opponents, and having certain resources and cards at the end of the game. The winner of the space-themed game will be anointed as the Emperor by the Galactic Counsel. 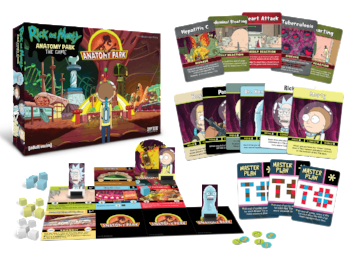 Rick and Morty: Anatomy Park – The Game — Based on the “Anatomy Park” episode of Adult Swim’s Rick and Morty, the 2-4 player strategy game sends players into the body of Ruben, a homeless man in a Santa suit, to build a nearly-microscopic amusement park utilizing his major organs . . . and some disgusting minor ones. Players must design the best park possible by placing tiles while simultaneously avoiding and fighting Diseases, such as Tuberculosis and Hepatitis A. Certain actions shift around Ruben’s internal organs during gameplay, causing unexpected effects and forcing players to act out embarrassing bodily functions! 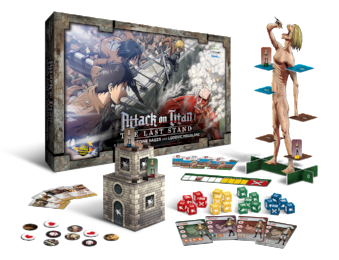 Attack on Titan: The Last Stand — Based on the popular anime series, this board game puts one player in the role of a fearsome Titan, threatening the last remaining human city. The other players are brave Heroes trying to protect the populace and preserve the supply depot in the final bastion of humanity! Designed by the award-winning Antoine Bauza and Ludovic Maublanc, the game requires strategic utilization of dice and features unique vertical gameplay, as the Heroes move up and down both the Tower and the 15-inch tall Titan Standee.

Learn more about the Southern Hobby Retail Expo 2017 at southernhobby.com/expo2017 and check out Cryptozoic Entertainment at cryptozoic.com