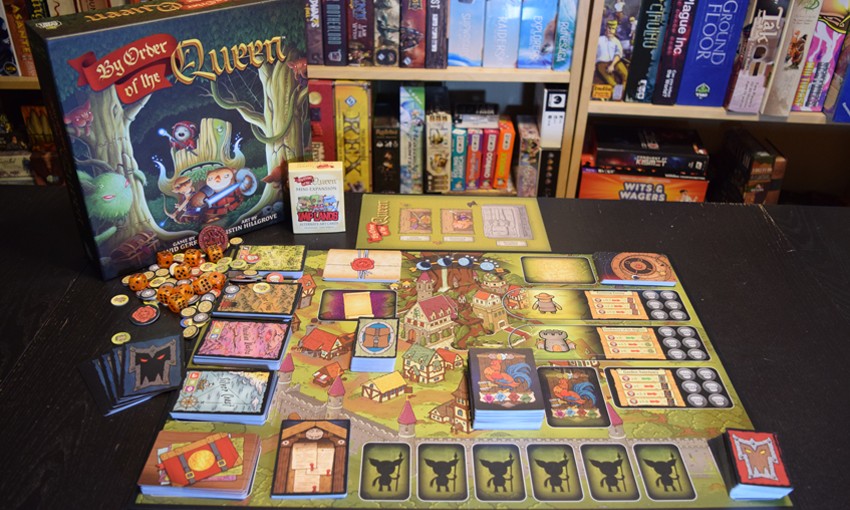 So, if you’re a fan of Gameosity a) we love you and you’re awesome forever, and b) you may have picked up on the fact that some of us really enjoy cooperative games, and Jess and I are first and foremost among them.  Though they aren’t always everyone’s cup of tea, a tough-as-nails co-op is my idea of a good time.  So it is with that context that I say that I really enjoyed By Order of the Queen. 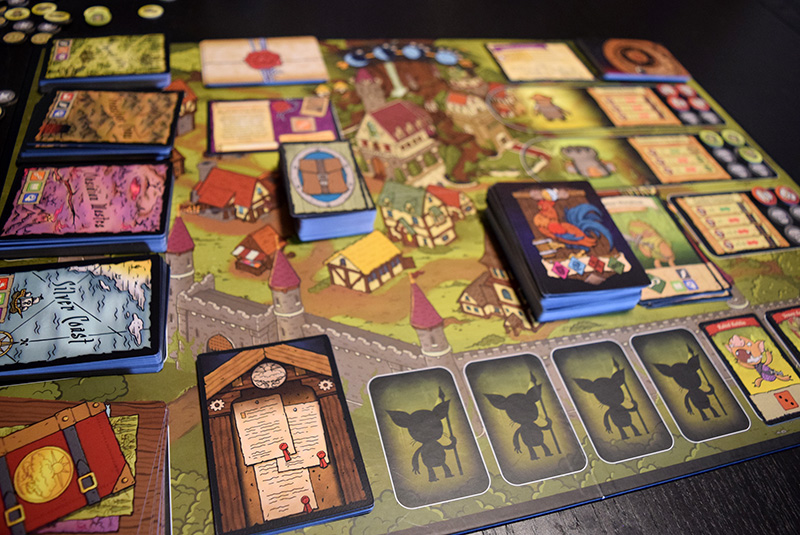 Set in the kingdom of Tessandor, the players of By Order of the Queen will take on the roles of adventurer guilds, all of whom must work together at the behest of the titular monarch.  The king has fallen in battle and now it is up to us to organize the heroes of Tessandor to defend it against invading foes.

Jess: Right off the bat, By Order of the Queen wins me over with its theme and presentation.  Medieval fantasy is an often- done (probably over-done) genre, but the art and personality of By Order of the Queen let me get excited about it immediately!  I mean, I want to know more about these heroes and places!

Andrew: Right?!  The characters alone could find their way into any Dungeons & Dragons game I’ve ever played in.  While it’s not a storytelling game, By Order of the Queen does such a charming job of establishing its setting that the stories almost tell themselves.

Mechanically, By Order of the Queen has a couple of interlocking systems, but at its core, its a game about creating sets of adventurers to undertake quests and fight foes.  Each turn, players can take one of four possible actions: 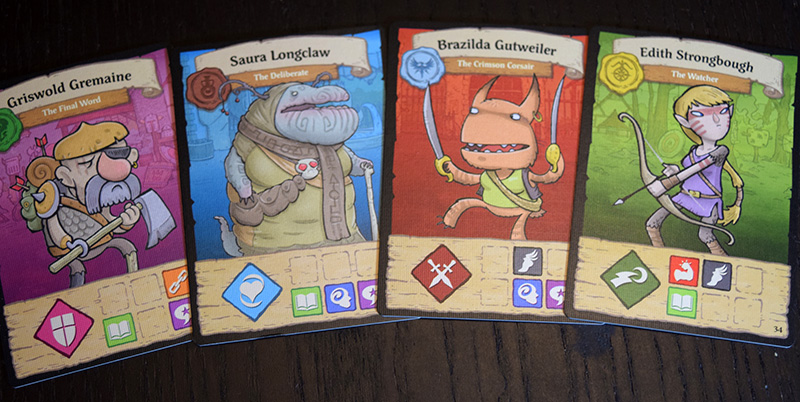 Questing and Fulfilling the Queen’s Order are mechanically similar.  The player will assemble a team of up to 4 adventurers and deploy them to the location listed on either their quest or the Queen’s Order card, respectively.  Each hero has a set of attribute icons, and for each icon present in the party, the player will get additional dice which are rolled to resolve location challenges. 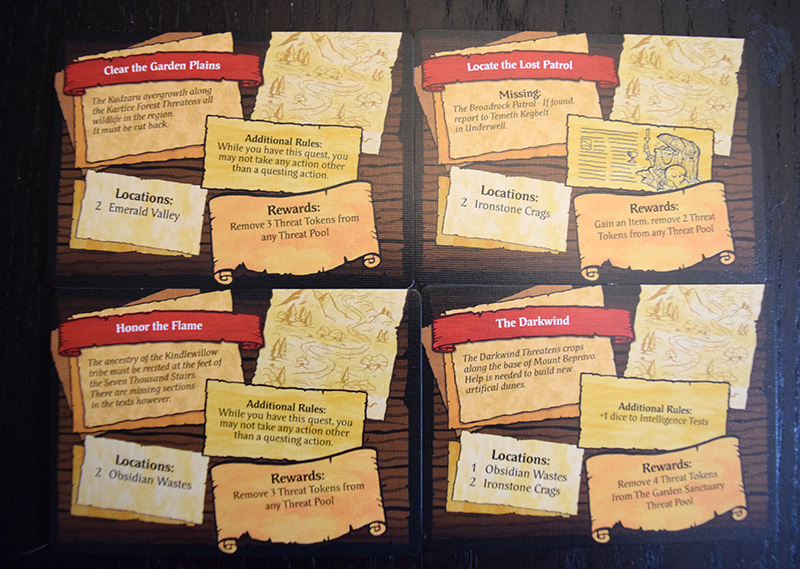 Successful questing rewards players with things like items and favor tokens, or, in the case of Fulfilling the Queens Order actions, progress toward the 3 Queens Orders necessary for the players to win the game. 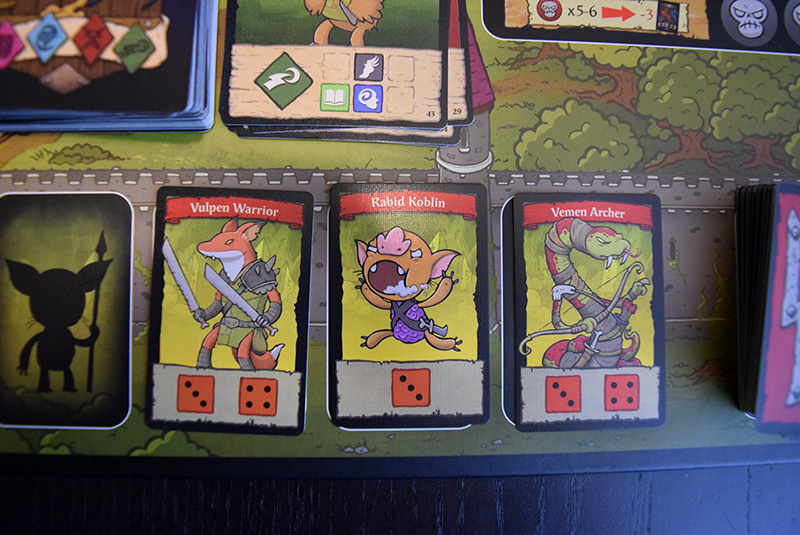 However, all is not easy in Tessandor.  Enemies (and the nightmarish Nemeses) will begin to pile up, threatening to destroy farmland, burn down castles, and overrun the kingdom.  Players must balance the need to complete quests with the need to defeat foes, lest By Order of the Queen end with the unceremonious collapse of the kingdom.

Andrew: By Order of the Queen is a balancing act.  The pressure comes in on all sides, and while it can feel like you’ve got everything under control at any given moment, the players’ resources (in terms of heroes as well as citizens and region tokens) are finite and ever-dwindling.  You have to be smart and lucky to make it through.

Jess: Absolutely.  Unfortunately, the ‘luck’ bit can sometimes create a bit of an uneven experience – bad rolls can tank what should be an easy quest, while having a handful of heroes not suited to the quests you must undertake can stall your progress.  Completing quests and getting items is rewarding and fun, but there’s absolutely the potential of looking at the board and feeling like, maybe this turn, you can’t make progress. 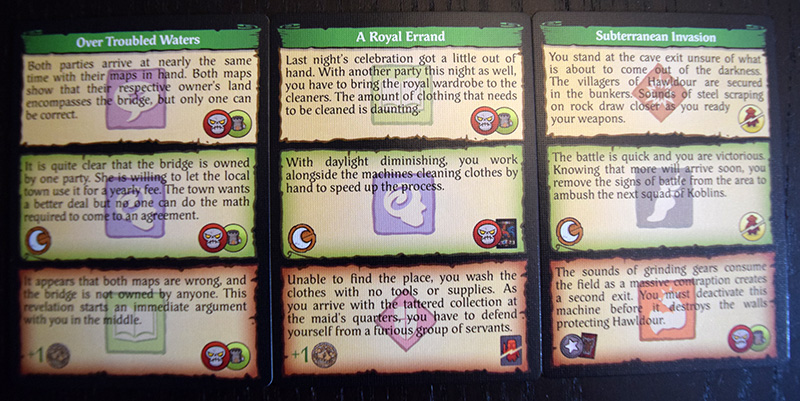 Actually, that brings us to our biggest criticism of By Order of the Queen – the game tends to overstay its welcome by a bit.  The rules are that the Fulfill the Queen’s Order action can only be attempted (!) once per round (regardless of the number of players), and must have 8 successes accrued on it before that order can be considered complete.  Since accruing 8 successes in one attempt is impossible, and it is entirely possible for a player to attempt it without accruing any successes, sometimes progress feels glacial.

Andrew: Yeeeah, the dice can really shank your efforts to do, well, anything here.  While I like dice and generally don’t mind a little chaos in my strategy, virtually every decision we made eventually lead to some dice getting rolled with no guarantee of success.  And while that can suck normally, when you blow a roll on the only thing that helps you progress toward winning and can only be done by a single player every 4 turns, well, that’s a real problem for me.

Jess: Agreed.  That said, I still enjoyed By Order of the Queen.  It’s tough (and thanks to the dice, sometimes it feels impossible), but my biggest issue was that it crawled a bit, especially in the mid and late game, when all that really mattered was getting the Queen’s Orders complete before we hit a game over condition. 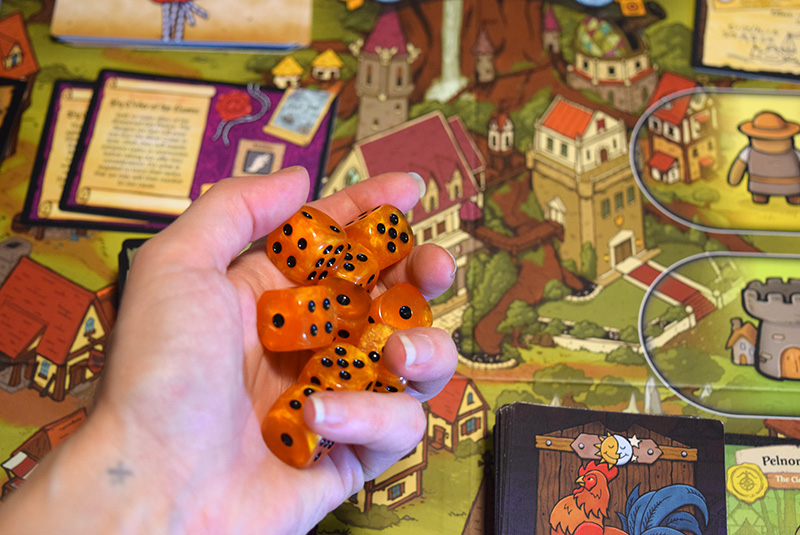 Andrew: Absolutely.  All that said, I enjoyed my playthroughs of By Order of the Queen.  Thematically and artistically, it’s a fantastic presentation, and while bad luck can easily ruin your day, when things work out the way you hope they do, it can be very satisfying to knock out quests, defeat monsters, and carry out the queen’s orders. 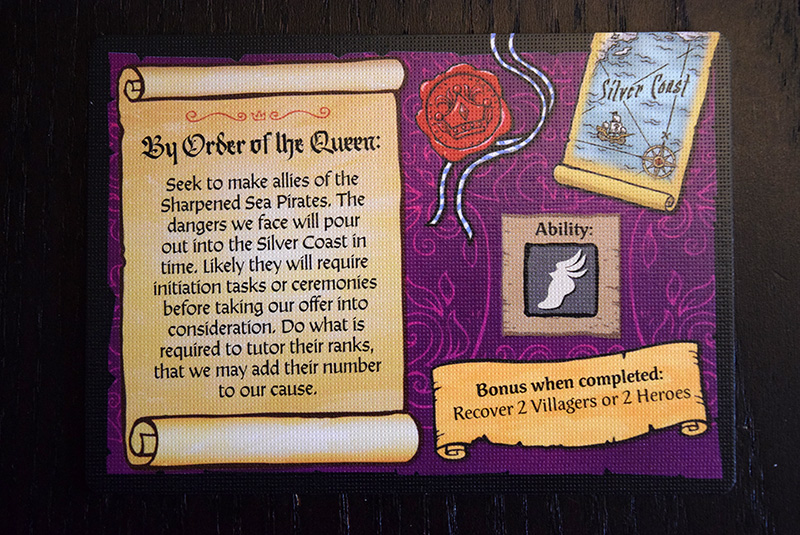 Overall, we recommend By Order of the Queen for those folks who, knowing they are going into an occasionally-tough, dice-driven cooperative game, think that it sounds great.  The art and setting would be perfect for a family-level game, but the constant reliance on dice and the generally slow pace of the end-game mean that little ones (and some bigger ones) will probably run out of patience for it before the game might naturally come to an end.  Those criticisms aside, there’s still plenty of fun to be had here, and it’s worth checking out…if it sounds like something worth checking out.  If that makes any sense.