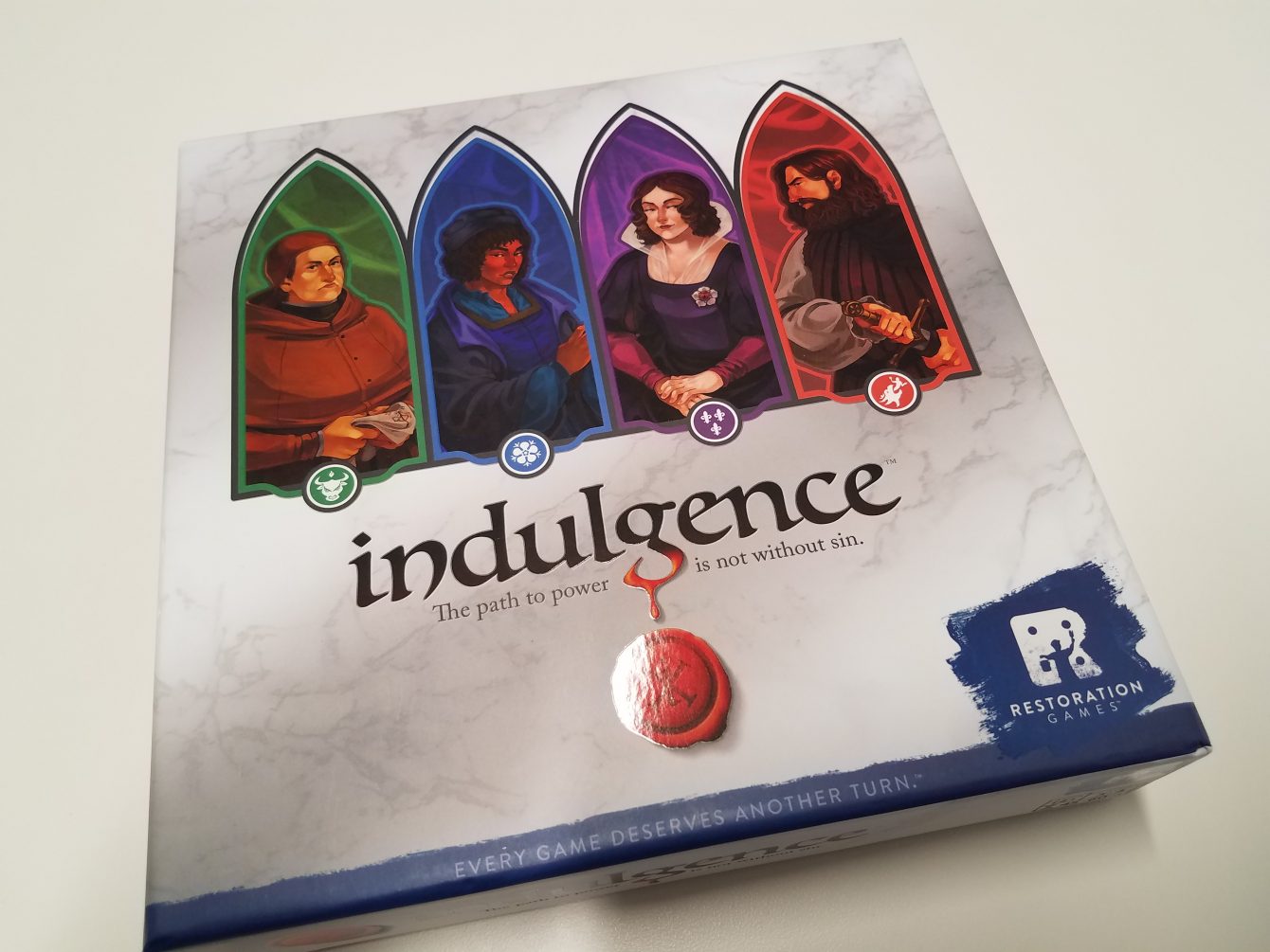 Indulgence is a unique twist on the trick-taking formula, occasionally rewarding players with the audacity to break all the rules (well, at least one of them).  This re-implementation by Restoration Games is phenomenally produced and extremely fun, despite the wonky player count.

Indulgence is a beautifully presented trick-taker, with a pedigree older than it may seem.  Doing what they do best, Restoration Games has taken an older board game property, this time Coup D’etat (initially published around 1966), applied a new theme and gorgeous presentation, updated its rules a bit, and brought its core gameplay back into the mainstream. 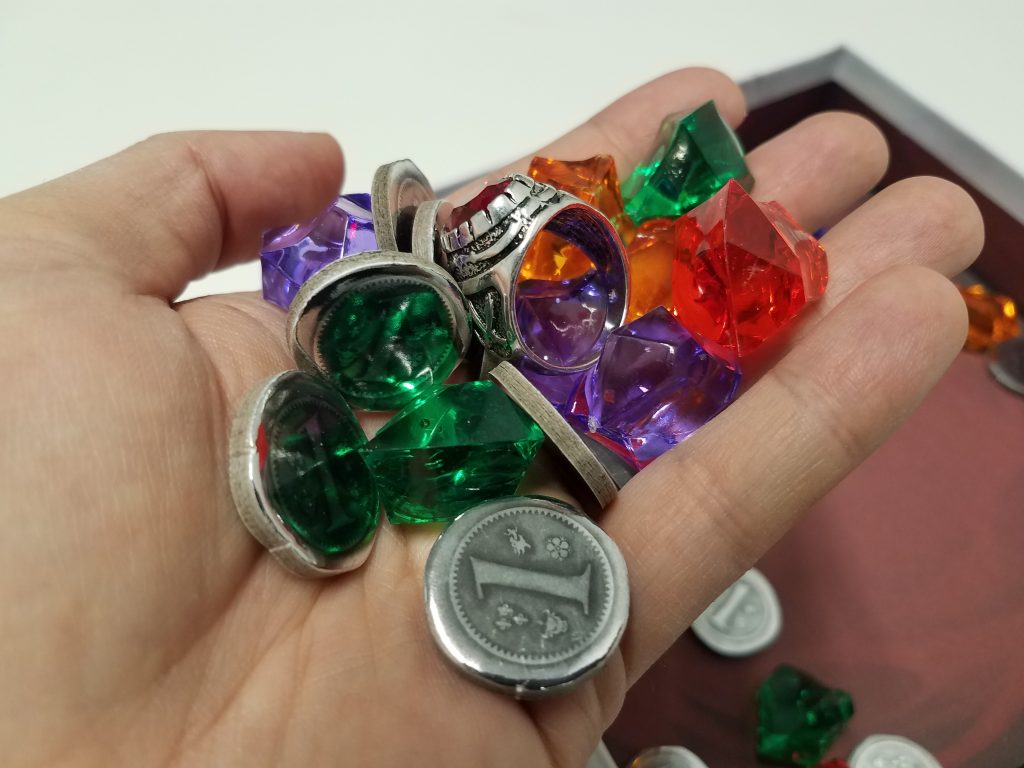 Andrew:  Just to be clear, though Indulgence is technically a implementation (or, more properly, a ‘restoration’), we’re unfamiliar with the original(s).  So our review is strictly from the perspective of coming at it as new players; because we’ve got no nostalgic connection to the older iterations of the game – we’re assessing nothing but what’s on the table.

Gameplay in Indulgence proceeds, unsurprisingly, as many classic trick-taking games do.  Each player starts the round with a hand of cards, valued 1 through 9 in each of 4 suits, and each turn players will play one card to the center in the hopes of winning tricks (having the highest-value card of the lead suit) to pick up cards worth points and to avoid cards which are negative. 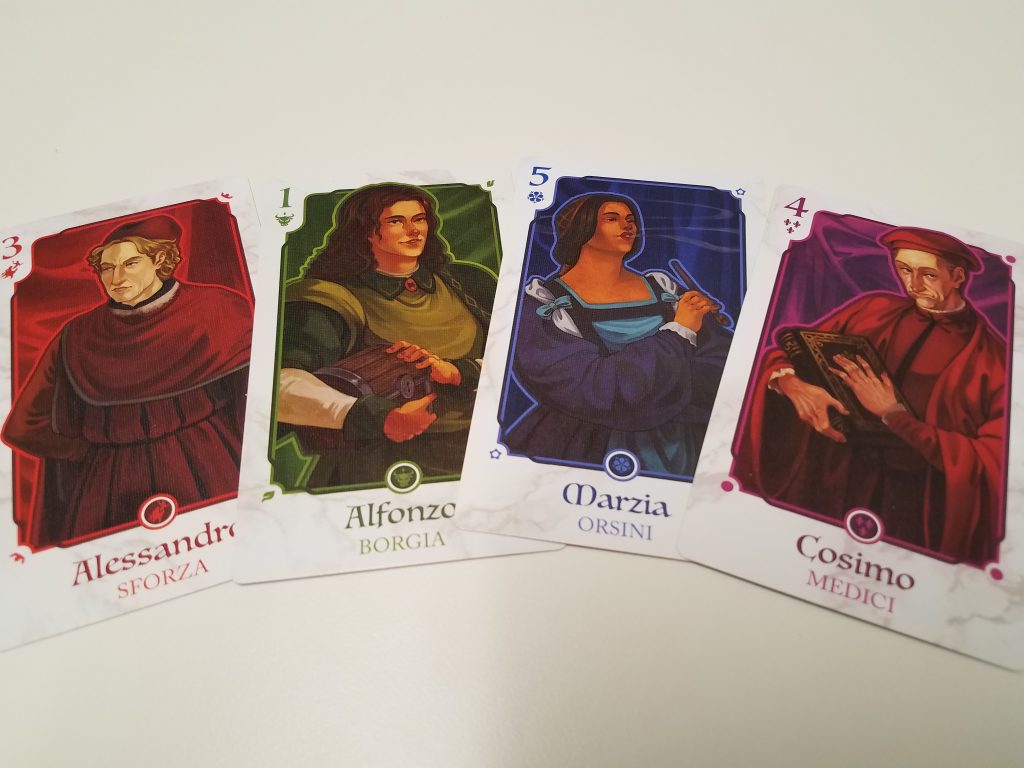 Jess:  What I love about the edicts is that they add variety to the gameplay.  Sure, some of the edicts are copies of each other (this suit is worth points, avoid this suit, avoid this number, etc), but the round-to-round strategy changes keep Indulgence interesting and engaging.

Andrew:  Absolutely!  And for the Ruler, since you get to pick your edict after you look at your hand, it adds a layer of strategy that helps to negate some of the luck of the draw. 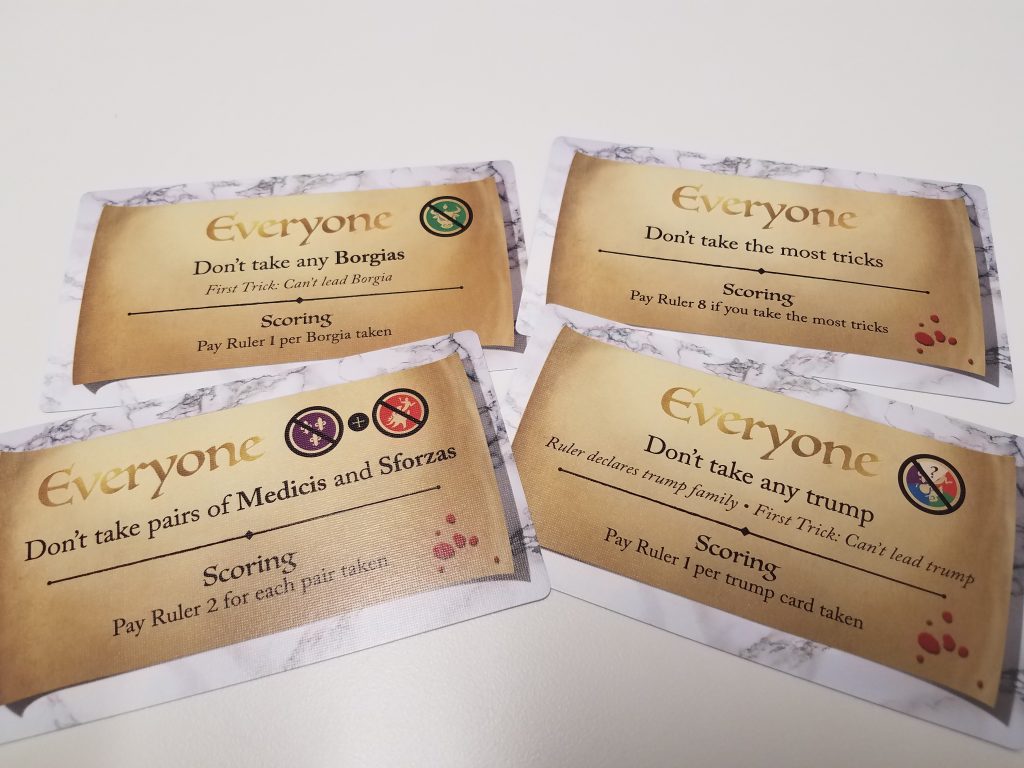 At the end of each round, players may gain or lose points (represented as coins and gems).  The goal of Indulgence, unsurprisingly, is to end the game with the most points.

Jess:  Just one of the many nice things about Restoration’s presentation of Indulgence is the quality of the components.  The coins and gems are chunky and wonderful, though people might get confused by the fact that the gems are all different colors – they’re really just 5-point tokens.  But I love them! 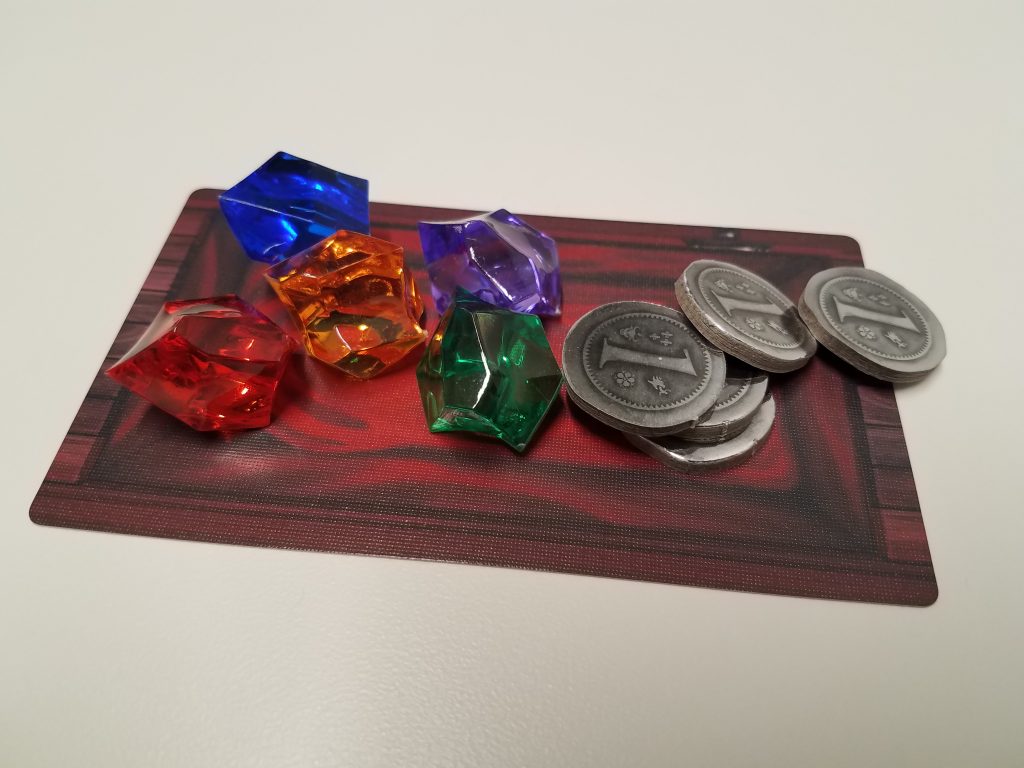 Now, in many classic trick-taking games, there’s a strategy called ‘shooting the moon’ – an alternative victory condition that is essentially the reverse of the rest.  So if, for example, you are supposed to avoid Hearts, ‘shooting the moon’ would mean instead trying to gather all the Hearts, and thereby winning the hand.  It’s an extreme press-your luck tactic that can make for very exciting gameplay.  And in Indulgence, it’s everywhere.

Andrew:  See, most trick-takers have a single ‘shoot the moon’ strategy.  However, in Indulgence, at the top of each round, when an edict is chosen, one player can become the ‘sinner’ – inverting the edict as their own personal victory condition. 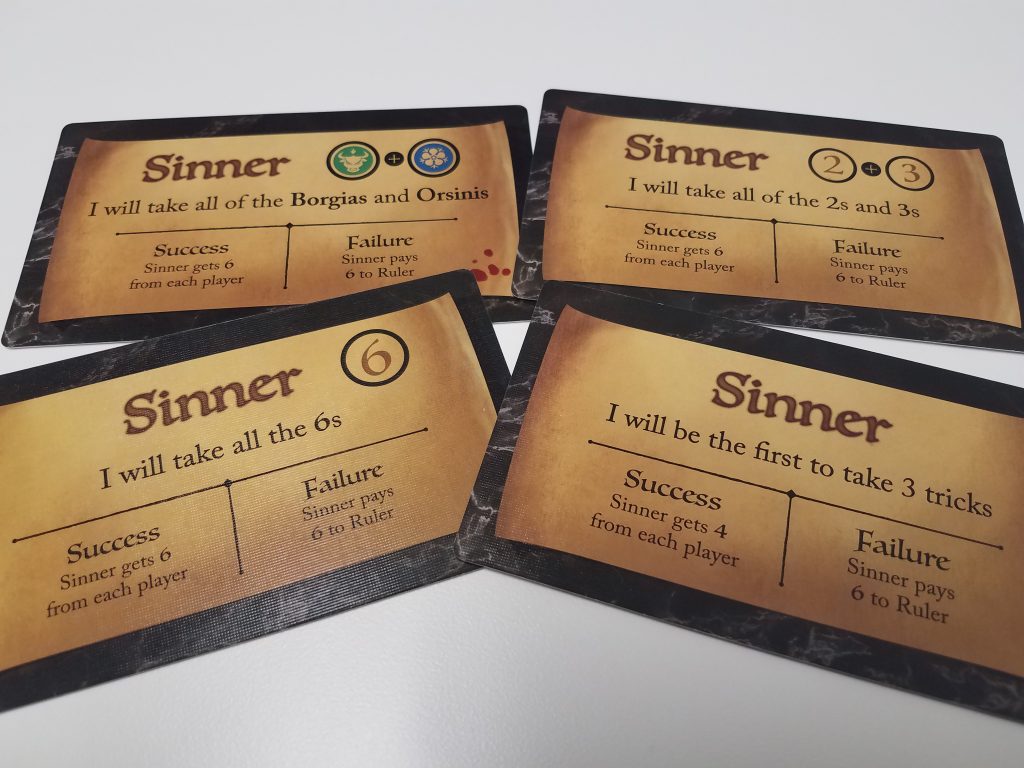 Suddenly, the tables turn; if the sinner wins, they get a big gain in points.  However, if they lose, only the Ruler gets rewarded, so the other players must now carefully consider how they balance these two against each other.  This shift in gameplay can result in lots of fantastic table tension and quick hands – once a sinner misses their victory condition, the hand is over immediately.

But for as difficult as the sinner’s job is, they have an ace up their sleeve (not, like, literally, but close!).  When a player chooses to become the sinner, they also get the Indulgence – a ring that can be used once per hand to make a played card’s value a 10, thereby beating everything else, and just might be enough to tip the balance in the sinner’s favor.

Indulgence continues until either each player has had the chance to be Ruler three times, or until one player cannot pay the florins they owe at the end of a round.  Each player adds up their score and the highest wins, with ties breaking to the most recent Ruler.

And for players who are particularly good at manipulating the game, there are the Papal Bulls, which introduce expert-level gameplay.  The Papal Bull allows, once per game, a Ruler to declare 3 edicts at once.  If there is a player among you who has the audacity to be the sinner and somehow navigates all 3 of the edicts simultaneously, they immediately win the game.  Otherwise, they pay the ruler a crushing 18 florins (which would frequently end the game anyway).  Huge risk, huge reward, big excitement.

Andrew:  I love Indulgence.  I’m not especially awesome at it, but it is a really satisfying gameplay experience, and the production is just top notch.

Jess:  Absolutely!  The cards look great, the bits are awesome, and heck, it even comes with a real(ish) ring for the sinner to wear!  Everything about it is really great.  I mean, aside from the player count.

Andrew:  Yeah, 3-4 is a pretty wonky number, but with the right group, I think this one’s a winner.  Restoration did a great job with its production, and the gameplay is excellent.  Definitely check this one out.

(Gameosity received a review copy of Indulgence.  We were not otherwise compensated.