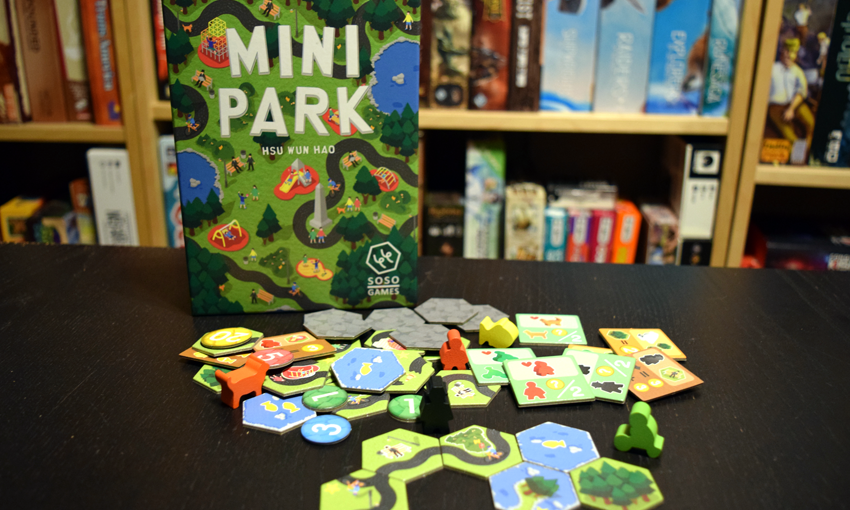 Mini Park is a charming, compact tile-placement game with great presentation and some fun, modular scoring mechanisms.  Hitting a lot of the same notes as a game like Carcassonne, Mini Park is a fun, light, strategic little game.

Mini Park, by Taiwanese publisher Soso Studio (who also published the excellent Dadaocheng), is a tile laying game where the players have been selected as the architects who will build a new park.  Each architect has their own ideas about what kinds of zones would make for an excellent park and they will work towards incorporating as many as they can in this group project.

Andrew: I think a park with plenty of benches and playgrounds would be really nice.

Jess: I’m going to fill this park full of cats in bushes!

Andrew: That is awfully specific. Why are the cats in bushes?

Mini Park has some variety in its setup – there is an in-box expansion that you can decide to include, as well as both basic and advanced scoring setups.  None of it is too complex, and we found that the game really worked at its best when everything was in play.  But you can introduce the more complex bits at your leisure, and Mini Park works just fine in its basic mode, too.

Generally, each turn, players will make a choice between 2 options – place a tile or place a character.

Placing a tile:  Players pick a tile from those available, or blind-draw one from the draw pile. Tiles must be placed next to an existing tile and must make logical sense. For example, if you are placing a tile with a road on it you must place it in such a way that the road can continue. You can’t have the road end in a tile of bushes, lest your park be known for its frequent bush-related accidents.

Tiles come in three types, Nature, Structure, and Expansion. Nature tiles depict trees and lakes, while Structure tiles include bushes, benches, and playgrounds. The Expansion tiles are special (more on that in a bit). Each type of tile has differing scoring rules.

Tiles score as soon as they are placed, and score differently depending on what kind of tile they are: 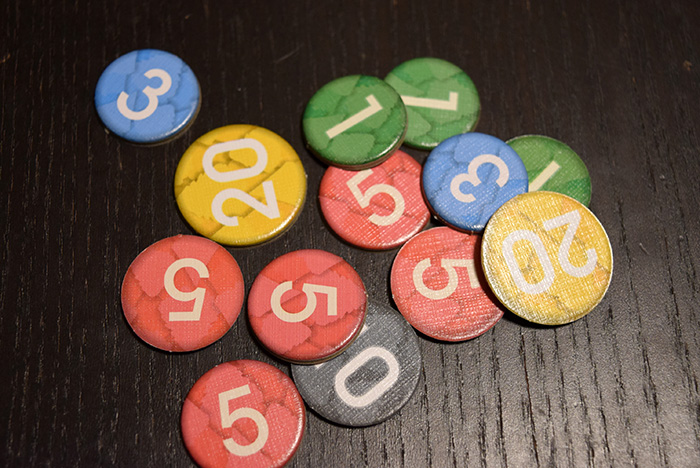 Instead of placing a tile, you can choose to place a character.  In the basic rules, each player can only place one of the six available character meeples (which are all adorbs), while in the advanced game, they can do so more than once.  Each character is associated with a terrain feature (bird=trees, child=playground, etc.) and scores differently, depending on whether you’re using basic or advanced rules.

In the basic rules, the Child/Working Man/Cat all score points based on how many of their associated feature appear on the road they are placed upon.  The Bird/Fish score for adjacent forests/lakes, and finally the Cyclist scores based on the length of the road it is placed on.

In the advanced scoring rules, each character has distinct scoring mechanisms.  For example:

The advanced rules also introduce ‘Objective’ tiles, each of which presents an additional opportunity for end-game scoring.  You will pick up an Objective tile when you take the Place a Character action.

Andrew: So I know that the advanced rules in Mini Park can feel a little clunky, but they substantially add to one of the most unexpected parts of the game – the push-your-luck element.  Since each character can only be placed once, there is this great waiting game that goes on; as tiles get added, characters will get more and more valuable.  Will it be you who decides to go for it and place a character?  Or will you let it ride, hoping to add to its value with your tile placements but also hoping your opponent doesn’t decide to snag it first.

Jess: For sure!  The Goal tiles only add to it, too – since they are randomly assigned to a Character during setup, it’s just one more little element of variety that makes it so that asdf, which is a fairly simple game overall, doesn’t feel too same-y from one play to the next.

When all the tiles are placed the park is completed and the player with the most points wins!  In the advanced game, that means scoring your objective tiles as well.

Jess: Yes! The art and the theme are really inviting. This is one of those games I think is great for everyone. I can probably get my mom to play it and she’s always nervous about playing new or complicated games, especially since it’s so easy to add or remove the advanced elements.

Andrew: Totally.  It’s a fun game with some neat tactical choices.  Particularly, I like the push your luck element with figuring out when to claim scoring mechanisms – you don’t want to do it too early, but every turn you don’t take it, your opponent might. Adds just the right amount of tension for what would otherwise be an extremely laid-back game – and like you say, you can add or remove them at your preference.

Jess: I found that it hit a lot of the same great notes as a game like Carcassonne, but has enough personality and unique scoring mechanisms that it’s definitely its own thing!

Mini Park is a nice mixture of light strategy and semi-cooperative play. While it’s not the easiest to get in the US right now, the Board Game Geek store is one place to try and find it.  If you can, though, we totally recommend checking it out!

(Gameosity received a review copy of Mini Park.  We were not otherwise compensated.)