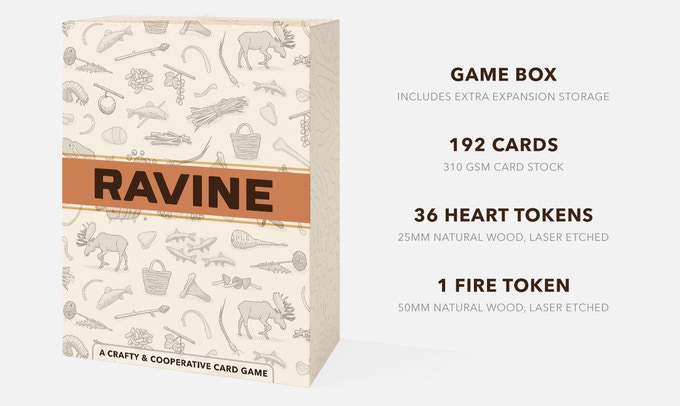 Ravine is a unique experience, feeling something like a rogue-like game in card form.  We had a really great time with it, but we actually wish it had pushed its own core concept even further.

The night is cold and dark and terrifying, and we may not make it.  Those of us who survived the crash though of ourselves as incredibly lucky.  But our injuries make foraging difficult, the weather keeps changing wildly, and there is this rising, unspoken feeling between us that there is something wrong here, something we can’t quite explain.  And some of us are starting to crack…

**Kickstarter Prototype Alert! – We were provided a prototype of Ravine for this preview.  Photos are either of that prototype or stolen from the Kickstarter Page**

Ravine, from Mathew Sisson, is a game all about atmosphere, which may sound surprising when one considers the relatively spartan components.  Built of nothing more than a deck of starkly beautiful cards and a few laser-etched wooden tokens, Ravine is an aesthetically & mechanically simple cooperative game.

Jess:  The premise is similarly straightforward – you and your fellow players have endured a horrific plane crash, and must survive until rescue arrives.  That…might not be so easy.

Each day, the survivors will decide whether they will spend time foraging or resting.  Resting means doing nothing – no harm, no benefit.  Foraging, on the other hand, is the only way you and your group will find materials you might use to build shelter and supplies to see you through the nights.

However, foraging isn’t without its risks.  Each player starts with anywhere between 3 and 6 hearts (randomly determined – it was a rough landing), and each card you draw while foraging costs you a heart.  Worse, you must commit to how many cards you will draw before you see what you’ve gotten – meaning that every outing is a bit of a gamble.

Andrew:  Much of what you will pick up while scavenging is useful – food to heal your injuries, materials used to craft primitive spears and baskets to aid you in your quest for survival, and even something as simple as a few dry logs to light a campfire and stave off some of the dangers for the night can literally make the difference between life and death.  There are dangers in the woods, though – angry wildlife, poisonous mushrooms, and stranger thing still that we won’t spoil here.

Jess:  The mystery of Ravine is really one of my favorite parts of the game.  We know that most of the deck is harmless.  But there’s always such a good sense of tension as you draw your forage cards – gambling yourself down to your last heart or two, only to get trampled by an angry moose is one heck of a way to go!

Once players have scavenged and crafted (or, as we said, just rested), the day will end and the night will come.  Each night sees the group drawing a Night card and resolving its effects.  Again, to avoid spoilers we won’t go into too much detail, but the group can expect to face angry animals, vicious weather, and the haunted nightmares of the hungry dark.

Andrew:  It’s not aaaall doom and gloom.  There are even Night events that are beneficial!…but don’t count on that.  Ever.

If, at the end of a night, a player has exactly one heart left, they draw and resolve a Madness.  This might be a permanent effect which they act out for the rest of the game, or a one-time issue that they will need to deal with.  Some are hilarious.  Some, less so…

And of course, if a player ever has no hearts left, well, that’s the end of their story.  If a single player makes it through the final night and gets rescued, the group can consider themselves as having won Ravine, though we’re not so sure how we feel about that – it’s hard to call it a ‘win’ when everyone is dead and you’re barely hanging on.

Jess:  That’s the essential cadence of Ravine – forage, endure, repeat.  And I have to say, I love this game.

Andrew:  Me too.  I love the simple choices – do we use this wood to start a fire, or do we try and find some stone to make a spear?  Do I share my food to keep everyone healthy, or do I horde it all to keep myself able to scavenge?  With the right group, Ravine has even greater potential for immersion, but your mileage may vary there.

Jess:  For sure.  I found it most fun when we were more ‘roleplayer’ and less ‘gamer’ about it – letting ourselves get into the mentality of our survivors and act up our madnesses to greater effect.  Not that they came up much, sadly.

Andrew:  Yeah, actually that brings me to my only real criticism of Ravine.

Ravine is at its best when the inherent creepiness of its concept is allowed to shine.  Unfortunately, aside from the subtly unnerving narrative in general and the spikes of tension each night, Ravine doesn’t quite do enough to pile on the pressure.  Oh, it’s not an easy game, mind you, but unless you’re truly unlucky with every forage, you should not have a terribly hard time keeping yourself above the 1-heart threshold for nightly madness checks, cutting out a major part of the game.

Also, though there are things in the deck that will harm and unnerve you, we found there simply wasn’t enough – it was possible to make it most of the way through the game before you encountered a paralytic mushroom or disembodied voices.

Finally, though the choices players must make always have significant implications, we found there simply weren’t as many of them as we would have liked.  Once you’ve built a shelter, handed out some spears, and are using baskets to aid in foraging, there isn’t much to do beside stuff your face at every opportunity and wait to see if madness, death, or rescue show up first.

Andrew:  All that said, we had a tremendously good time with Ravine.  Honestly, our criticisms are grounded in a desire for more of the game, rather than less.  Everything here is great, but we could easily have done with twice the cards, twice the crafting options, twice the creepy-as-heck events, and definitely more threats and random events in the forage deck to make that choice all the more complicated.  It’s just that fun.

Jess:  Absolutely.  Ravine’s shortcomings really all boil down to the fact that it doesn’t go as far as it could.  Where it is, though, is pretty dang awesome, and who knows whether the game will grow as a result of its already-successful Kickstarter?

Ultimately, we really enjoyed Ravine and we totally recommend heading over to the Kickstarter and checking it out!

(Gameosity received a prototype of Ravine for this preview, with the right to request a completed version of the game.  We were not otherwise compensated.)