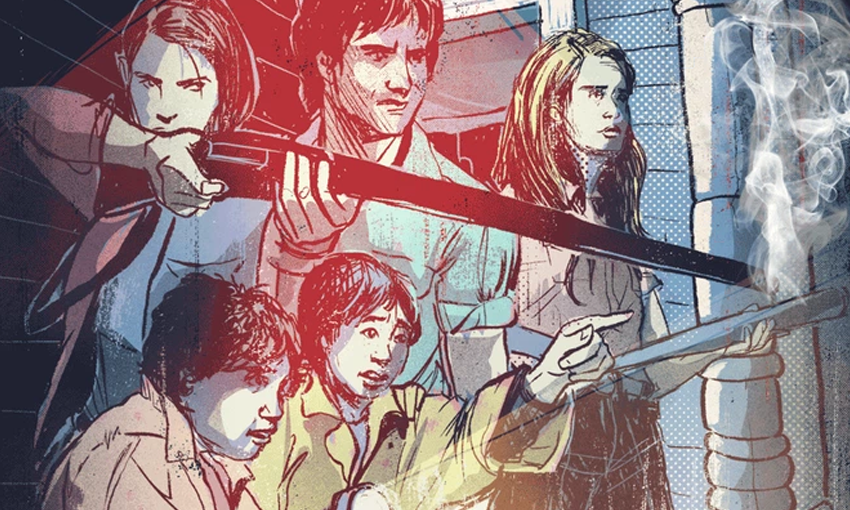 Jon Gilmour, designer of Dead of Winter (one of our favorite co-op games), Pocket Dungeon, and Atari: Centipede/Missile Command/Asteroids, has teamed up with Doug Levandowski (Gothic Doctor & Seven Minutes in Hell) to create Kids on Bikes (KOB), a rules-light horror storytelling system, set in the 1980’s. With a lack of modern technology, you must find a way to survive whatever nightmare is currently terrorizing your town. I think fans of Stranger Things or Stephen King’s IT will really love this game.

I recently spoke with Ivan Van Norman who helped bring Kids on Bikes to Hunter’s Books, but I wanted to get some more details about the game. Thankfully Jon was happy to oblige!

Jess: Jon, Kids on Bikes seems to tap into a lot of 80’s nostalgia. What would you say were your biggest inspirations for the system?

Jon: When Doug and I started on the project, we immediately made a list of some of the things we wanted to have as touch stones. Stranger Things and Paper Girls were the two biggest for sure. After that the list is enormous! Goonies, E.T., Super 8, Monster Squad, Stand by Me, The Sandlot, IT, The Lost Boys, Donnie Darko, and so many others.

Jess: Given that your a boardgame designer primarily, what are your RPG influences? Did you read any of the existing RPGs on children, like Tales from the Loop, and if so what did you learn from them?

Jon: Oh yes! I backed Tales from the Loop, and have played it several times, and it’s a good game. But I like more conversational games like the Powered by the Apocalypse (PbtA) games. I want a game that is rules light so I can teach it in a few minutes, and I don’t have to prepare ahead for as a GM. Those kinds of games for my life style better, and have a higher chance to hit the table.

Jess: You reference both Dread and Monsterhearts in the KS, but those are really different types of games. Did you look at anything closer to theme, or did you just run with it?

Jon: We looked at a bunch of different systems, and even considered making it a PbtA game, but in the end we felt it was a much more fun challenge to design a new system from the ground up. It was something that neither of us had done, and it let us hit different experience notes. Part of that also comes from our backgrounds as boardgame designers, where each project is its own thing.

Jess: You have a long list of awesome contributors as Stretch goals for KOB! Can you give us any clues as to what we can expect to see from them?

Jon: We worked really hard on finding a ton of friends in the industry with a really diverse set of voices to make some awesome stories! Each one is going to building their own town setting, and filling them with exciting places, people, and mysteries!

Jess: Do you guys have any favorite anecdotes from your own playtests in these systems?

Jon: Oh boy! We’ve been testing this for awhile now, and one thing I know is that every sessions has great moments that we talk about for a long time. I just did a session with the podcast Boards Alive, which will be available soon, where Doug was GMing.

It was summer time in a small NJ town. My character Jimmy Agricola was a jokester and budding stage magician. I was skilled in being gross, which manifests iteself in my ability to “throw fart sounds” or be a Fartriloquist as we called it. So we went to my favorite joke/magic store “The Magic Shelf” which was run by old man Mr. Mystery. After making my purchase of Fart Spray, finger traps, and Magic String. I asked if he had anything special in the back. So he took us into the back of the store and we pooled our money to buy some firecrackers and he regaled us with tales of the Firecracker Wars. We haven’t gotten the chance to use them yet, but I can’t wait to!

Jess: That sounds like a blast! (pun intended. Andrew please don’t fire me.) Kids on Bikes sounds awesome. Its on Kickstarter right now until November 28th, so get on your bike, ride like the wind, and check out the Kids on Bikes Kickstarter campaign!