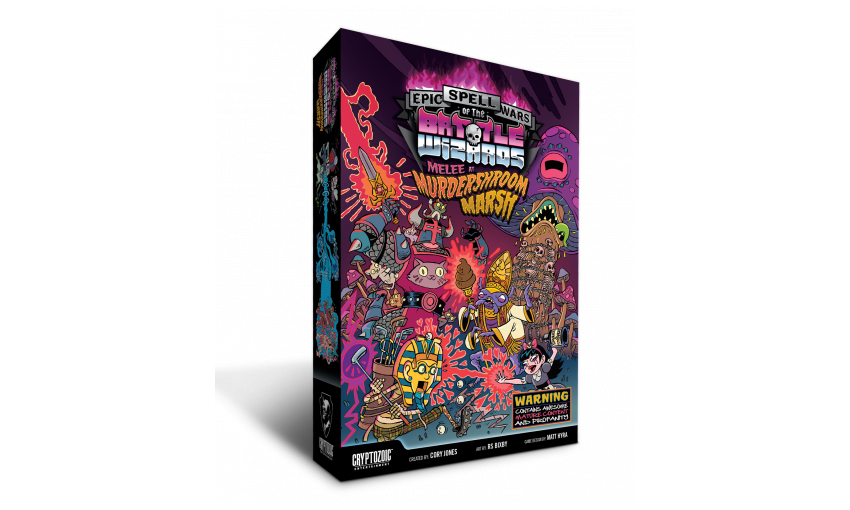 Cryptozoic Entertainment, leading creator of board games, trading cards, and collectibles, today announced the November 29 release of Epic Spell Wars of the Battle Wizards: Melee at Murdershroom Marsh. In the third card game in the popular Epic Spell Wars series, 2-6 players once again create Spells with up to three Components—this time with new keywords “Cantrip,” “Bad Trip,” and “Everlasting”—as they try to destroy opposing Wizards. Every aspect of the game, from the cards to the rulebook and box, is filled with the series’s trademark off-the-wall humor and mature, at times bizarre art (over 100 original illustrations).

“The game features all of the gruesome, hilarious deaths you’ve come to expect from Epic Spell Wars,” commented Matt Hyra, Lead Designer of the game. “And the ‘Quick Match Mode’ we debuted in the second game is now the standard method of play, so games are short and sweet.” 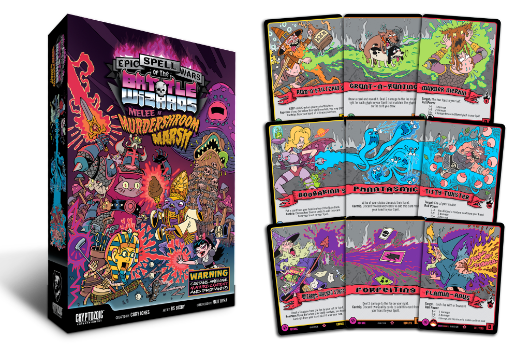 The game looks to continue the growth of the Epic Spell Wars series, which has gained a legion of fans since the first game was featured in a 2015 episode of the hit web series TableTop.

The third Epic Spell Wars game adds three new keywords to play. Cantrips are extra cards that can be added to Spells in exchange for discarding cards. Bad Trips are cards that resolve twice in Spells with lots of different glyphs. Many of the Treasures in the game have the last new keyword: Everlasting. They do not get discarded when a player is defeated or at the end of a game, so he or she can keep on using them. In addition, half of the Delivery cards in the game are Creatures, meaning they can stay in play even after a player resolves a Spell. The other half of the Delivery cards have two glyphs, allowing a player to roll at least two dice and, in the process, dole out more damage to opponents and gain various bonuses.

Epic Spell Wars of the Battle Wizards: Melee at Murdershroom Marsh will be available at retailers nationwide November 29 for a suggested retail price of $30.