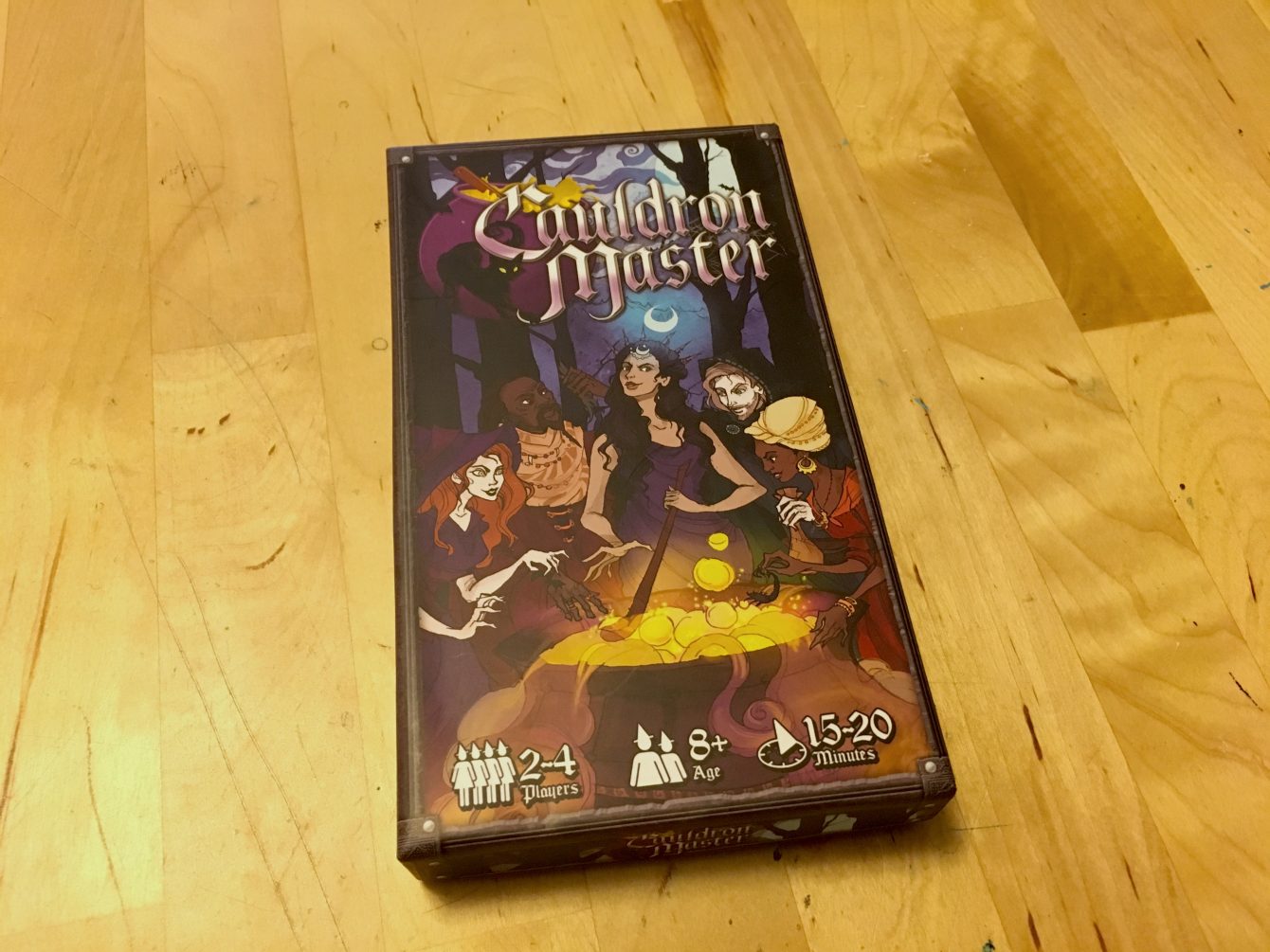 Cauldron Master is a relatively simple set collection game with neat art and beginner-friendly mechanics.  While we found it entertaining enough, it probably doesn't have the staying power to compete with more meaty games in the same weight class.

Diana: So, what are we playing this time?

Rob: It’s a game about witches collecting ingredients in order to brew potions.

Diana: And it’s all card-based?

Diana: Well I guess we should get-

Finley: *runs across the cards and settles on Diana’s lap*

Rob: Well this is thematically appropriate.

Cauldron Master – from designers Caezar Al-Jassar and Kuly Heer, and publisher Alley Cat Games – is a card game that features a mix of set collection and bidding as players try to out-brew their rival witches. The basics are pretty, well, basic, with each player starting with a hand of five witch cards that are used to determine who gets to collect what types of ingredients first. Higher values mean a better chance of gathering before everyone else, but once a witch is used they’re out of the running until all of the other witches have been used – so you probably don’t want to blow through all of your best cards too early on.

Rob: I generally think games that have you bidding on turn order can be a little annoying, but it works better here.

Diana: The fact that certain cards can only collect certain numbers of certain ingredients definitely helps. It forces you to think a bit more about who you want to use during a given round, rather than just trying to go first every time.

Rob: It still wasn’t super thrilling with just the two of us playing – more players make the game more harrowing, and I mean that in a good way.

Ingredient gathering and potion brewing is the crux of Cauldron Master, with players taking whatever they manage to pull on their turn and tossing it into cauldrons of various sizes. Multiples matter as well, with points multiplying based on how many of a given type of ingredient is present in the same potion (e.g. pigs feet, cat skulls, etc). Different ingredients equate to different point values, and whoever has the most points at the end of the game wins (naturally).

Diana: It’s… okay, I guess? I mean I didn’t hate playing it and trying to gather up multiples of the same ingredient at least kept me focused on what I was doing.

Rob: Yeah, it wasn’t bad. I can’t say I was thrilled with anything, but the base mechanics of trying to figure out which cauldrons to use and how many ingredients to try and cram into them was entertaining, for what it was.

Diana: It’s not something I’d go out of my way to play again, but I don’t hate that we played it either.

Rob: I think Cauldron Master would be good as a beginner game, something that you could use to introduce a beginner to hobby games.  Its appeal probably won’t keep it in your rotation once you sink your teeth into heavier stuff, but it’s a perfectly serviceable starter/filler.

Diana: Exactly.  I mean, maybe if you really love witches?  But even then, you’ll probably move on to something else pretty quick.

Rob: But hey, at least I made it through the whole review without making a single witch joke!

Diana: We’re all very proud of you.

You can order a copy of Cauldron Master here.