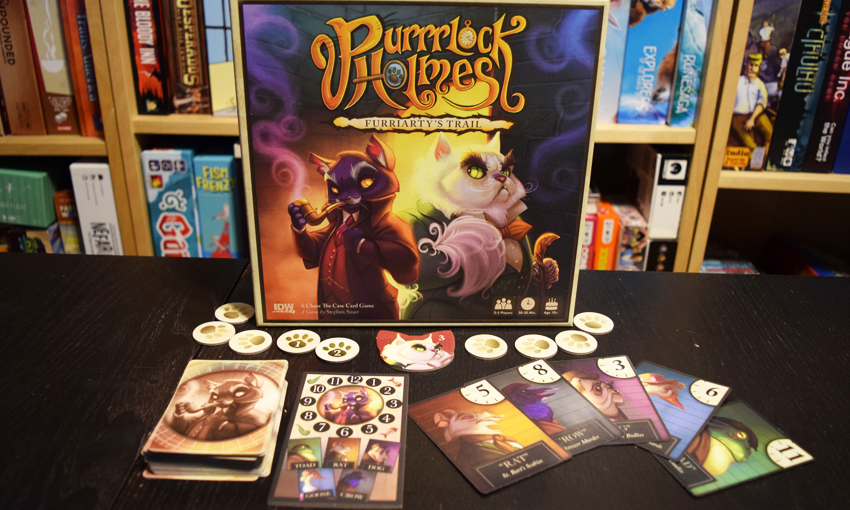 Purrlock Holmes: Furriarty's Trail combines deductive gameplay with a race to the finish, as well as really great art.

Purrrlock Holmes is…not what it seems.  With adorable art from Jacqui Davis, you might be tempted to think that Stephen Sauer’s game would be one of cunning creatures and mischievous animals.  However, beneath the paper-thin veneer of theme lies a simple logic puzzle that, honestly, didn’t engage me all that –

Jess: Zounds!  The evil Furriarty is up to his dastardly deedsonce more!  We must lend chase, lest this fiend escape!  Come come, my dear Andrew – the game is apaw!

Andrew: …Ok, so maybe it was just me who didn’t feel engaged.

Despite appearances, Purrrlock Holmes is, as mentioned, a logic puzzle.  Each player is competing to be the detective who solves crimes along Furriarty’s trail, trying to capture the master criminal before he makes his escape from London (read: if the player’s don’t win fast enough, the game ends in a loss for everyone).

Each player is pursuing their own lead, represented by a card which faces away from themselves.  This card has a character and a number, and the player will solve their case when they correctly guess either (or both, if they can) of these attributes. 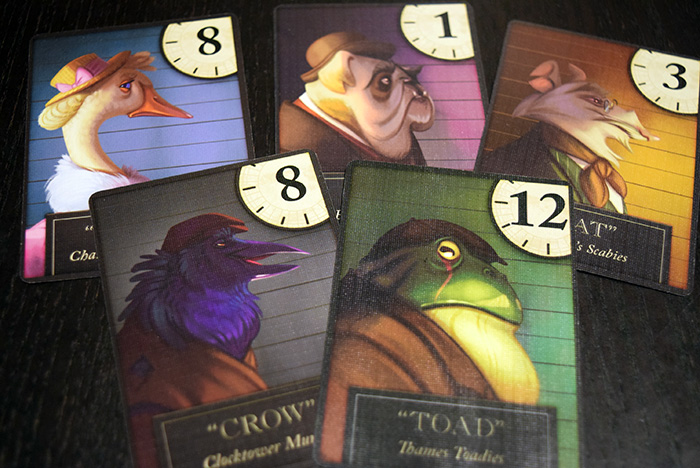 The method players will use to deduce their suspect’s identity will be to show other players a card from their hand each turn.  The other players must then say if the card is a Lead or a Dead End. A lead is any card that either matches the suspect or comes within 1 hour of the time. So If your suspect is Crow at 8 O’ Clock and you show a Toad at 9 O’ Clock (or a Crow at any time), it would be considered a Lead. If the card does not meet one of those requirements, it is a Dead End. 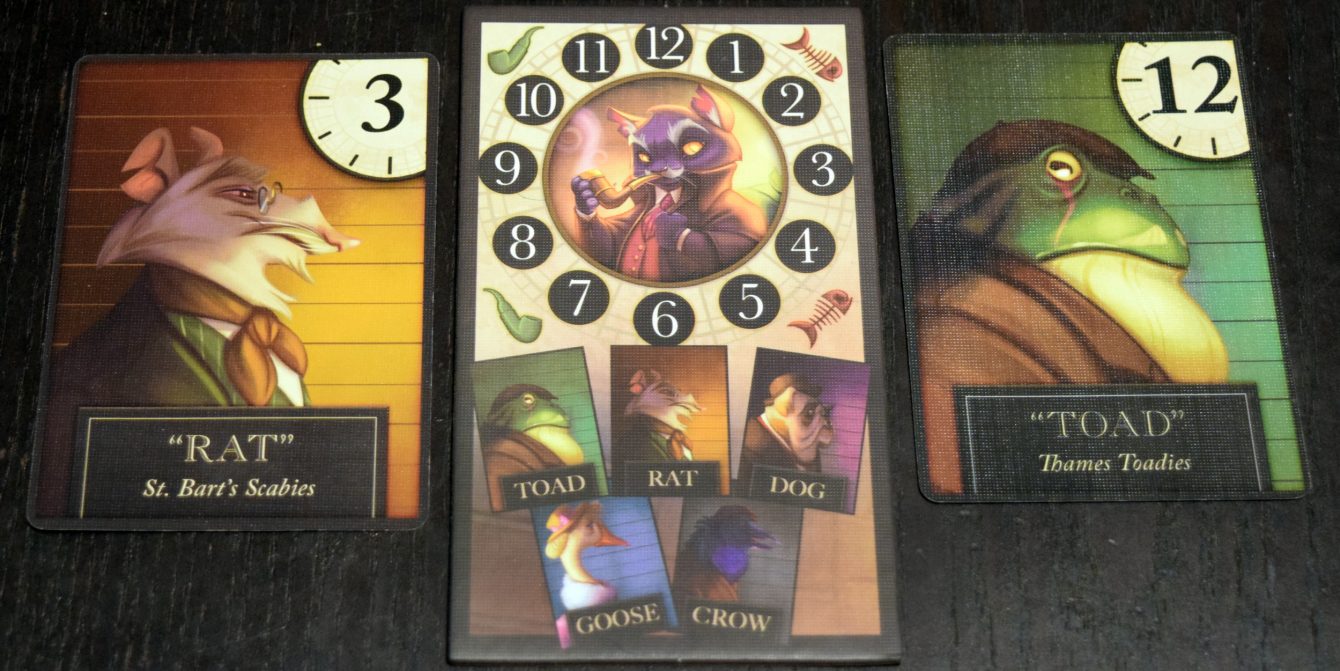 Leads go to the left of your player board while Dead Ends go to the right. As the cards pile up, it becomes easier to narrow down the details of your suspect. If you are relatively certain, you can make a guess. You can declare you are going to guess only the suspect, only the hour, or both.

The other players must tell you if you are correct or incorrect. If you guess both details of a suspect and get any one of them wrong, your guess will be incorrect. If you guess only one detail and get it correct you’ll get a paw point from Furriarty’s trail. Guess both right and you’ll get two. If you ever collect Furriarty’s token, the game is over and everyone compares paw points to see who won.

Jess: So in case it isn’t obvious, I had a really good time with Purrrlock Holmes.  The combination of animal characters, Holmes, and deductive gameplay are a winner in my book!

Andrew: Possibly because you’re so good at this sort of game, whereas I, admittedly, am not.  Something about the logic puzzle here is lost on me – it’s a race, with each player trying to make their deductions more efficiently than the rest.

Jess: Yeah, Purrrlock Holmes isn’t cooperative, even though the game makes it sound like you’re all working towards catching Furriarty together.  The player with the most points wins, unless Furriarty escapes, in which case the player with the least points loses the worst, I guess? 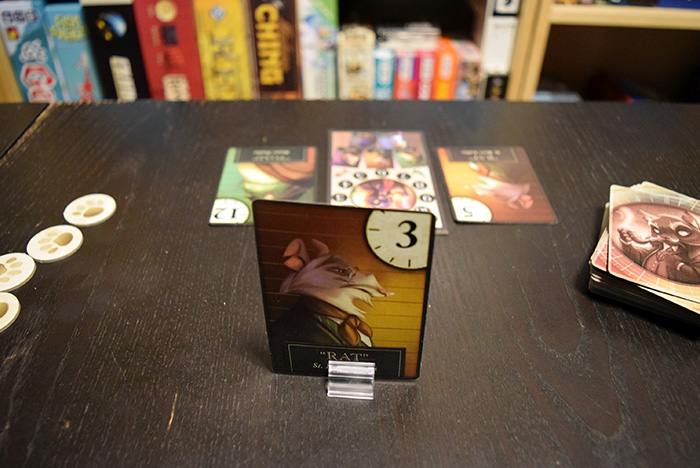 Andrew: While the whole ‘card facing away from you and the other players help you guess it’ might sound vaguely like Hanabi or (ironically) Beyond Baker’s Street, that mechanism contributes absolutely nothing to the gameplay itself.  The other players’ participation is only there because there isn’t a better way to give you info about a card you can’t see without, you know, turning it into a single-player video game.

Jess: So, we’re a little split on Purrrlock Holmes.  I really had fun with it – I like the simple deduction mechanism and I love the art.

Andrew: Totally fair.  And for me, it was a miss, though I can chalk that up more to my own relative disinterest (and poor skill) in the gameplay.  There’s nothing wrong with Purrrlock Holmes, it just wasn’t the game for me. 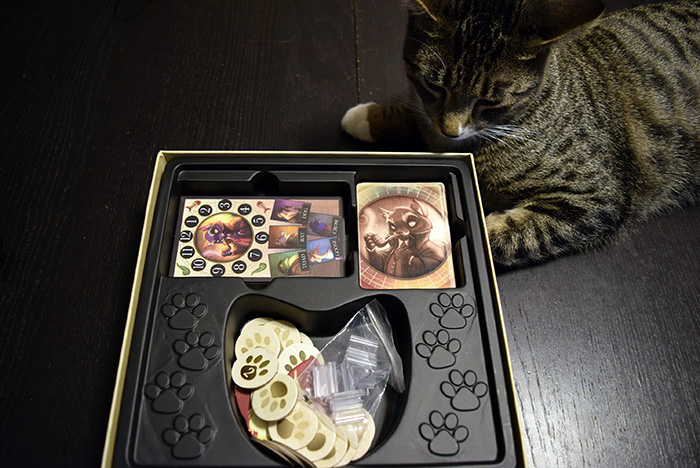