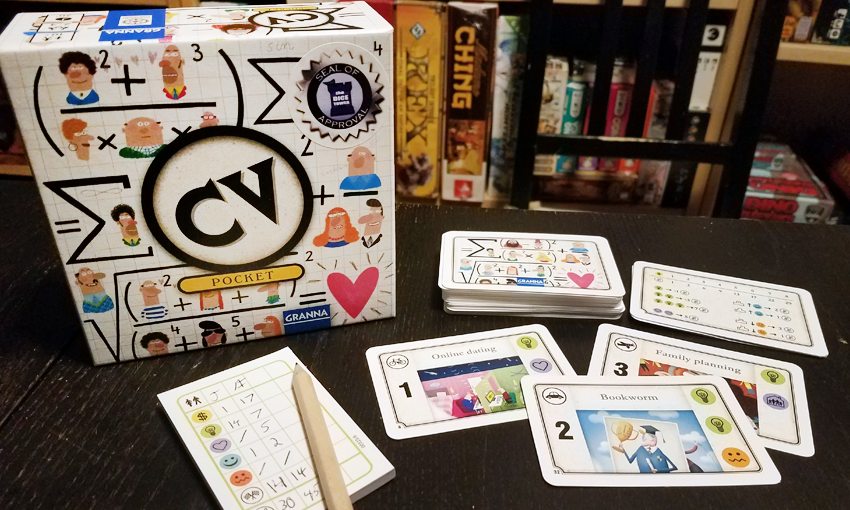 CV Pocket, by Filip Miłuński, is a quick-play, set collection game based on CV. It’s simplified format follows the trend of taking popular board games and making them portable for continual enjoyment. 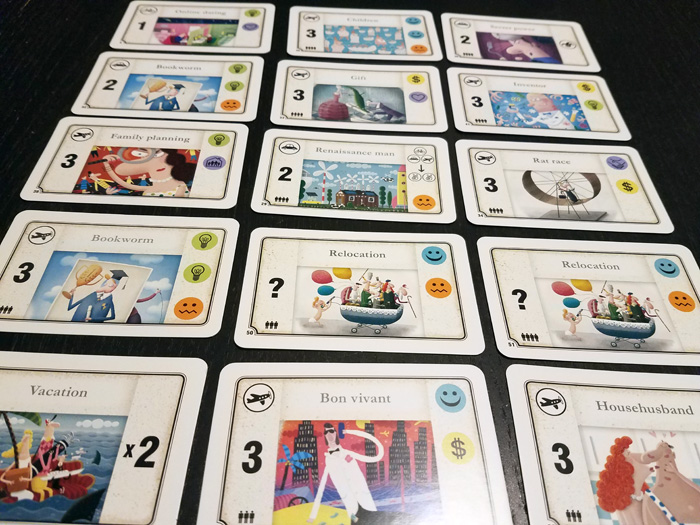 Jess: I love CV!  So I was incredibly psyched to get a version that I could easily play on the go!  Unfortunately, I did not have a ton of fun here.

Andrew: Dang, that’s really not what I was hoping to hear.  Alright girlfriend, lay it on me.

Like I said, I really like the original CV. It is a basic set collection game where you are trying to live the most rewarding life possible. In it you roll dice to get sets of symbols. These symbols allow you to buy cards which will give you benefits and score you points. There isn’t much to it.

What makes the original game engaging is in the stories it tells (not that it’s a storytelling game, mind you). You start out as a child with nothing more than your favorite bicycle or maybe just a piggy bank, but as the game goes on you’ll get your first job, perhaps get married, buy a home, win the lottery, take up jogging, or a ton of other fun things. You’ll live through 3 phases of your life: youth, middle age, and elder and during each phase cards appropriate to that time period will be available. I love seeing my character’s story grow over time, and at the end, win or lose, I have this unique person that I’ve built over the course of the game.  It’s what makes CV unique, and more fun than just collecting symbols for points.

CV Pocket lacks all of this.

Here’s how CV Pocket works. You’ll shuffle the deck of cards and deal 15 cards face-up onto the table in 3 columns of 5 cards. Players will take turns pulling cards from those available. On the first turn you can only take 1 card from the first row. After that you must take a card from the row matching the number that was on the card you previously pulled. 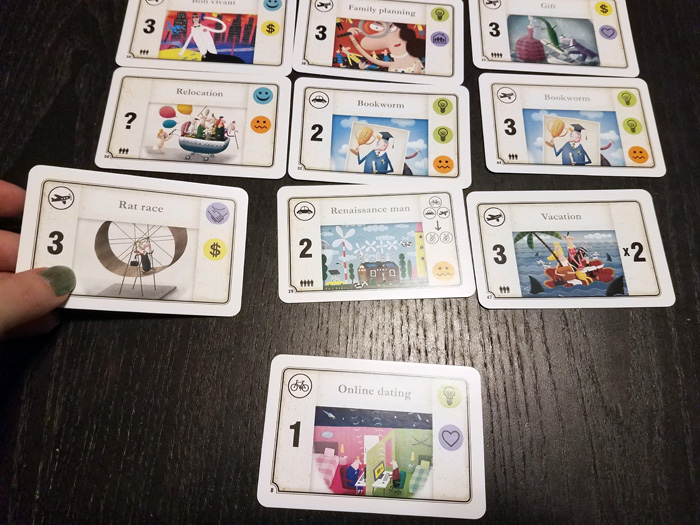 For example, in the picture above, I previously grabbed “Online Dating” (which was apparently ‘sexting’ in the prototypes, until Richard Ham of Rhado Runs Through pointed out that some folks might not appreciate that). The card number is 1 so I can only pull from the first row, thus I take “Rat Race” (I pity the person I am creating). Had I taken “Renaissance Man” which is a 2, I would have to take either “Bookworm” or “Relocation” from the 2nd row. 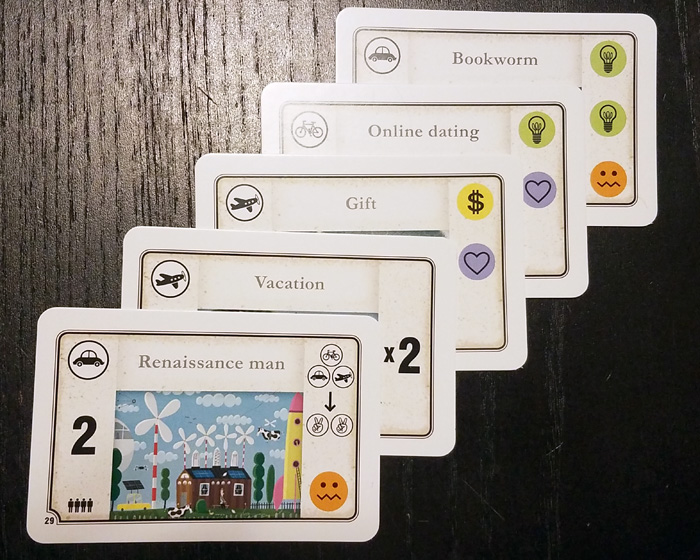 The cards you take go into your tableau; building out your life story. Unlike the original CV, there are no separate phases, no cards specific to any particular time period, and really there’s not much to connect them story-wise. You’ll go back and forth, taking cards until everyone decides to pass, thus ending the game.

Yep, that’s it. As soon as everyone passes the game is over. This results in a mild game of chicken. If you drop out early, you can avoid unhappy faces, but if everyone continues on, you could lose out on more points (though passing is turn-by-turn, you can always jump back in). We ended up playing until there were only 2 cards left and no one was really interested in them. 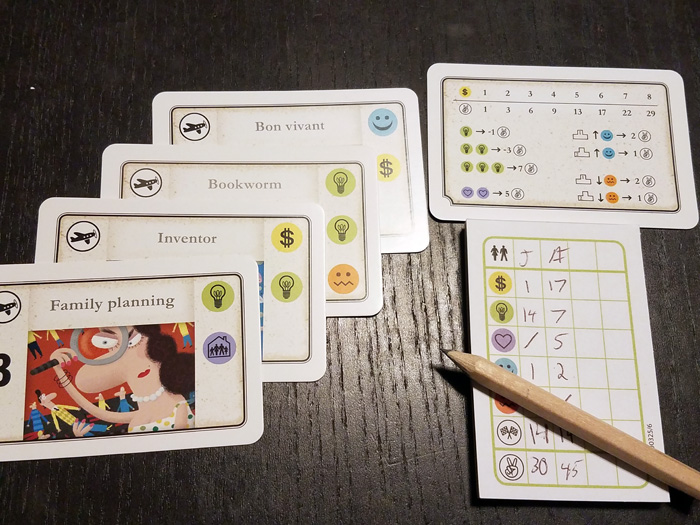 Your score is based on the symbols you collect. The more money you have the more points you get. Knowledge is worth negative points until you have 3 symbols. pairs of relationships get you 5 points. Lastly the person with the most happy faces gets 2 points while the runner up gets 1 and its reversed for for unhappy faces (the persona with the least gets the 2 points).

The game takes about 10 minutes to play and is a fairly shallow experience. Not that original CV is a deeply strategic game either mind you, but at least CV gains depth from the fun of the character building. CV Pocket fails in that, especially seeing as it lacks variety.  There are 55 cards in the game and many of the cards have 4 copies of themselves in the deck.

Andrew:  And that’s doubly-sucky for a bunch of reasons.  Some of the cards were slightly off-color in their contents (the Housewife goal is to have every kind of relationship, the art for public support showed a line of people with hordes of babies, etc.), which aren’t huge red flags, but might put some folks off.  Though, to be fair, the original CV and Gossip expansions had that going on, too.

Jess:  Yeah, they passed up the chance to have more unique art at the expense of just adding a bunch of copies of some cards.  It feels lazy. 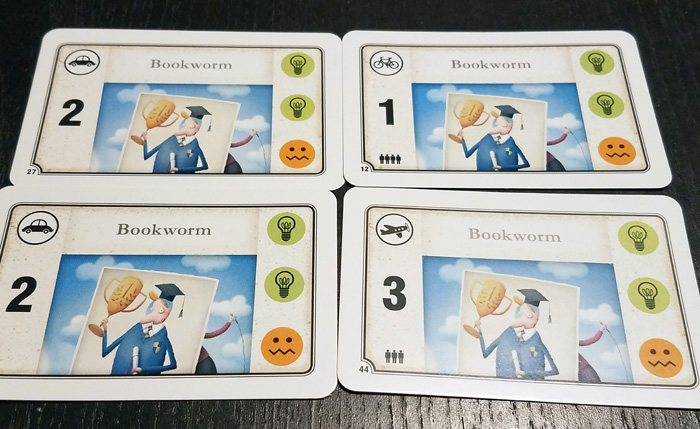 This means everyone could be a book worm if they managed to pull the card, or you could be a bookworm 4 times over if you wanted for some reason. Your story could look really similar to another players and your idea of a unique narrative goes straight out the window. This isn’t a huge game and I am disappointed that there isn’t a wider range of life events to choose from. Even if the symbols must stay the same for game balance, I would have appreciated differing titles and images.

Jess:  Now, I know that the storytelling bit of CV was really all in our heads and not part of the game per se, but it’s what made CV a unique game!  Take that away, and what’s left?  Not much, honestly.

There are two more points about CV Pocket that bum me out. Firstly, the card stock is really flimsy and second, the game does not fit in the box insert. The score pad is slightly too big to shove into its’ spot and so the cards that lay on top of it end up sitting over the edge of the well.

Andrew:  It’s a game with some cards, a pencil, and a score pad.  Come on box insert, you only had one job! 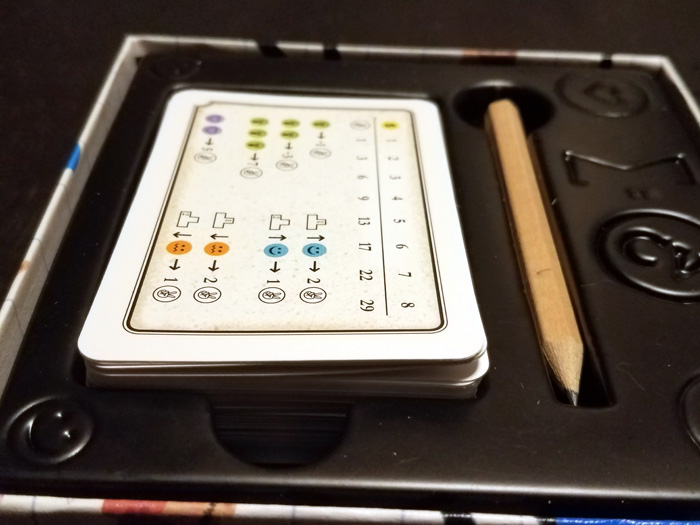 I could ignore the physical issues of the game if it had been more fun, but without the substance of the original game, CV Pocket falls flat.  Get the original – it’s better in every way, and loads more fun.