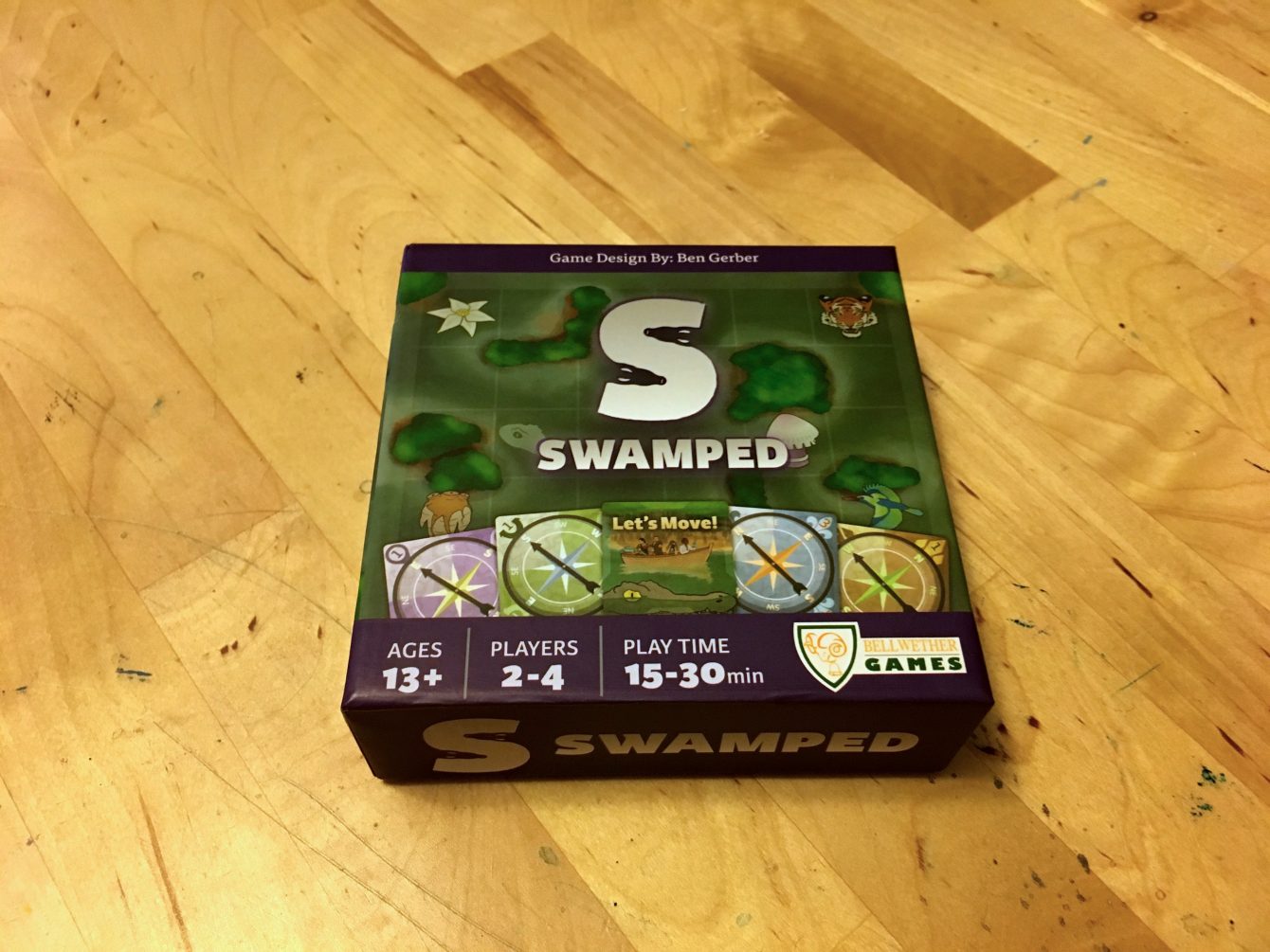 Rob: I think I’m always going to prefer cooperative board games over competitive ones, but I sometimes like it when my co-op games also have a slight competitiveness to them.

Rob: Okay, I like it when it’s done well.

Swamped – from designers Jonathan Logan, Benjamin Gerber, and Dennis Hoyle, and publisher Bellwether Games – is a rather compact competitive co-op game where one to four players try to collect precious (and valuable) specimens from a swamp while also trying to avoid becoming lunch for a very large crocodile. Collecting the Kingsfoil herb is the primary goal, with the game ending once enough specimens are gathered and the boat exits the swamp, but everyone has their own personal goals that they’re trying to complete as well. So while all players do want the Kingsfoil, they’ll likely end up fighting over everything else.

Diana: This game was not easy to get into.

Rob: Yeah, sorry. Some of that was my fault because I couldn’t quite grasp some of the rules.

Diana: In your defense, parts of the rulebook aren’t very clear.

Rob: I suppose not. But at least we finally got things going.

Diana: It made a lot more sense once we were able to see everything in motion.

There are some familiar bits to Swamped – such as the randomized map that will make navigation and item collection a different sort of challenge with each playthrough – but the mechanic that takes the spotlight is the way movement is handled. Since everyone is in the same boat with a shared goal as well as their own personal goals, getting anywhere is a bit more complicated than simply saying “I’m going here.” Players actually share moves when it’s time to get going, meaning the boat can go all over the place in a single turn. What’s interesting is the use of Coordinate cards to “bid” on how many moves can be made.

Rob: This was where the rules gave me the biggest problem, but it also isn’t actually as complicated as it seems in text.

Diana: I did think it was fairly interesting how we could play these cards to essentially pick how many moves we could make, then have those values swapped around by others.

Rob: There are a few ways to mess those numbers up, which I appreciated. Like being able to play like-colored Coordinate cards on top of each other so long as the number you assign yourself is higher than the one you currently have.

Diana: Yeah, I think that was a pretty clever use of give and take. Because by increasing the number of moves you can make, you might also end up giving someone else more moves – depending on how the card is arranged.

Rob: I mean I didn’t hate playing it.

Diana: No, me neither. But it didn’t thrill me either.

Rob: Would you say it’s a decent intro to board games?

Diana: Sure, I don’t think it’s a bad choice for something like that. But I think it would also be an okay filler game. You know, the sort of thing you play real quick in between playing longer or more complicated games.

Somewhat clever movement mechanics aside, Swamped comes across as just kind of okay. It certainly takes more effort to learn than it does to play, and the fact that it packs away into such a small box is nice, but the game itself isn’t particularly enthralling. At least it wasn’t for us.