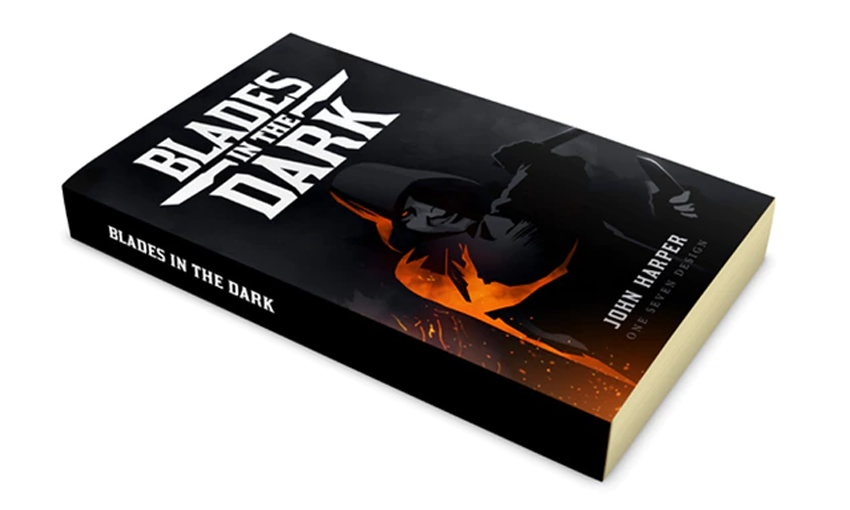 Blades in the Dark is a new roleplaying game by John Harper about scoundrels in a haunted city building a criminal empire. What really sets Blades apart, beyond any mechanical or thematic element, is its consistent and holistic awareness of the moment to moment experience at the table. More than any RPG I’ve played, the book, feels designed to be used in play as opposed to merely being referenced in prep. Blades in the Dark’s relatively complex mechanics build on each other intuitively, thanks to its object-oriented design and presentation. RPGs often present their rules monolithically, a chunk of complex data to be memorized beforehand and then idiomatically regurgitated at the table. Blades, on the other hand, is a collection of precise tools, each one specialized, accessible, and scalpel-sharp. 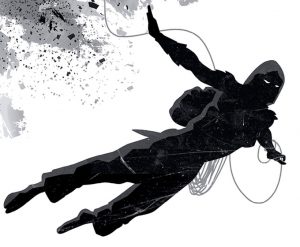 Blades in the Dark can get away with a high number of subsystems by making use of a very concentric design. Concentric design is a concept Vincent Baker has written about at length, but it boils down to a game’s core dice mechanic being capable of supporting any situation that might come up in play. This means that players can “Fall Back” to using it whenever need be. The rest of the rules make Blades truly sing, but you won’t break anything if you need to temporarily jettison some of them to keep things moving.

For this dice mechanic, Blades uses only six-sided dice. When your character performs a risky action, you’ll roll several of them at a time and reference the highest result. A 6 is a solid success, a 4-5 is a success with a cost or complication, and a 3 or less is bad news. Anyone who has played Apocalypse World or another Powered by the Apocalypse game will instantly feel at home here, and that isn’t a coincidence. Blades in the Dark draws heavily on that system, both philosophically and mechanically.

Blades in the Dark takes that basic structure of graduated success and wraps it within an elegant system that serves to formalize a lot of what is merely implied in Apocalypse World (and its most popular descendant, Dungeon World). In Blades, the players and the game master have a short conversation around each roll, during which the GM clarifies both the risk involved should the character fail, as well as generally how effective the action will be if it succeeds. Blades calls these two factors “Position” and “Effect,” respectively.

If you’re used to more traditional RPGs, where a roll might only involve setting a target number, this step might seem unintuitive or even clunky. In actual play, though, it’s incredibly smooth. Firstly, both Position and Effect are usually obvious based on the fictional situation.

For example: facing a whole gang of street toughs on your own with only a knife is a “Desperate” roll and you’re likely going to have “Limited” effect. Secondly, this is something we already do in RPGs all the time, albeit more casually. If you’ve ever run D&D and said something like “If you make this roll you’ll make it across the chasm, but if you fail you’ll fall and take a lot of damage” then you’ve got a solid idea about how this works. Formalizing these factors in Blades is vital, because there are no difficulty classes or target numbers. A character with a high rank in “Skirmish” will always have a good chance to succeed on any given roll in a fight. But, based on their fictional position, the meaning of a success can change dramatically, as can the consequences for failure.

Blades characters will be taking actions and facing these consequences primarily during “Scores”: heists, thefts, pursuits, infiltrations, and similar criminal endeavors. A Score in Blades fulfills roughly the role of a dungeon or an adventure in a traditional fantasy game, or a single mission in a game like Shadowrun. The game’s macroscopic structure rotates between two states: Scores, when the PC’s spring into action and get roughed up, and Downtime, when they recover, count their earnings and work on long term projects.

The game’s most radical innovation comes in the way it transitions from Downtime back into the faster action of a Score. It explicitly forbids the players from over planning and endlessly deliberating on the details of their coming caper by providing a system to cut right to the action.

Once the players have chosen their next Score (and gotten some information on the target), they choose only a general type of plan, such as “Stealth,” “Deception,” or “Assault,” and then fill in a single important detail, such as “the point of infiltration,” “the method of deception,” and “the point of attack.” Based on these details, the GM assembles and rolls a pool of dice. The outcome of this roll determines what kind of Position the PCs are in at the moment they begin the Score. Then the GM just kicks things off, describing the scene around the PCs and the first obstacle they encounter. If the roll was high, they’ll be in a Controlled position, ready to deal with it on their terms. If the it was low, they might be in a tough spot, contending with an immediate threat. 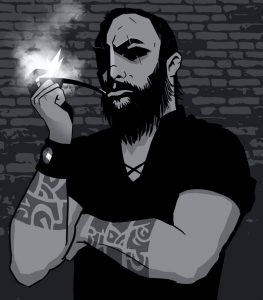 As a player, this also feels a little unnatural at first. You want to prepare for every eventuality. You instinctively want absolute control over how you deal with challenges, so you can eliminate consequences and the role of chance. That instinct is why we’ve all spent hours in D&D, Shadowrun, or any other RPG carefully selecting equipment, casing targets, and describing how we do everything perfectly. The rub is that the whole plan can still go pear shaped anyway the moment the dice start rolling.

Understanding this disparity is central to the genius of Blades. Once the group takes a leap of faith and embraces the Blades way of doing things, this moment absolutely sings. Instead of valuing detailed preparation and planning, Blades in the Dark gives players the tools they need to deal with the unexpected and keep things moving. Examples include mechanics for deciding on the fly what equipment your character is carrying, and a system for narrating flashbacks, allowing the group to describe in the moment how they would have prepared for a moment like this. By tying this flashback mechanic directly to other resources and consequences, Blades provides a tight, satisfying framework within which a huge amount of narrative freedom is possible. Like many aspects of Blades in the Dark, the combination of quick planning, engagement, and flashbacks feels designed directly in response to problems other games can have in play. With mechanics that both drive moment to moment action as well as formalize the larger conversation and narration, Blades reflects Harper’s deep understanding of how people play RPGs, and his ability to craft highly supportive tools that come together beautifully at the table.

This ability is on full display in the way Blades in the Dark presents its setting, the shadowy metropolis of Duskvol. Character types and abilities in Blades are tightly tied to the world, and Duskvol is designed from the start to be a dense, three-dimensional playground in which to bring these abilities into play. Harper achieves sleek usability by presenting Duskvol and its inhabitants in digestible, single-serving chunks. Each neighborhood and faction has a short, self-contained blurb with just enough fictional information to get the ball rolling. In addition, the minimal mechanical details you might need to bring it into play are available at a glace. 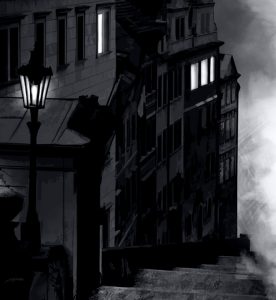 The decision to present setting like this, as individual pieces of directly usable details, is a clever way to make lore highly digestible. It feels sleek and modern. Games that lean heavily on a specific setting often over-describe their worlds in prose, giving hundreds of pages to exhaustively detailed histories of places, people, and factions. In these cases, setting is a thing separate from play and mechanics, a vast swathe of knowledge the GM is expected to read and digest, then translate into adventures and mechanics. There’s nothing inherently wrong with detailed lore, but as a GM I personally find it often paralyzes my own creativity. The desire to get all the details of a place “correct” leads to obsessively double checking the lore in my prep, putting outsized emphasis on details that, if I am being honest, most players won’t use or care about.

Because Blades in the Dark is so player driven, even on a moment-to-moment level, it’s unrealistic for the GM to do this type of lore-driven prep. If the players decide they want to rob a noble house in Whitecrown right now, for example, there isn’t any time for that. What Blades does give you is the ability to flip to the two-page spread of Whitecrown, check a brief description, and use its stats for wealth and security to help the players put together a score on the fly. In prep, these entries allow the GM to focus specifically on the details in which they are interested, keeping a few notes on hand and feeding opportunities to the players. Blades in the Dark admonishes the GM against planning out a story, instead providing everything needed to dangle something shiny in front of the players, then see what happens when they reach out to get it. By presenting setting details as manageable game objects, not much different from a traditional stat block, Blades fully supports this type of play. 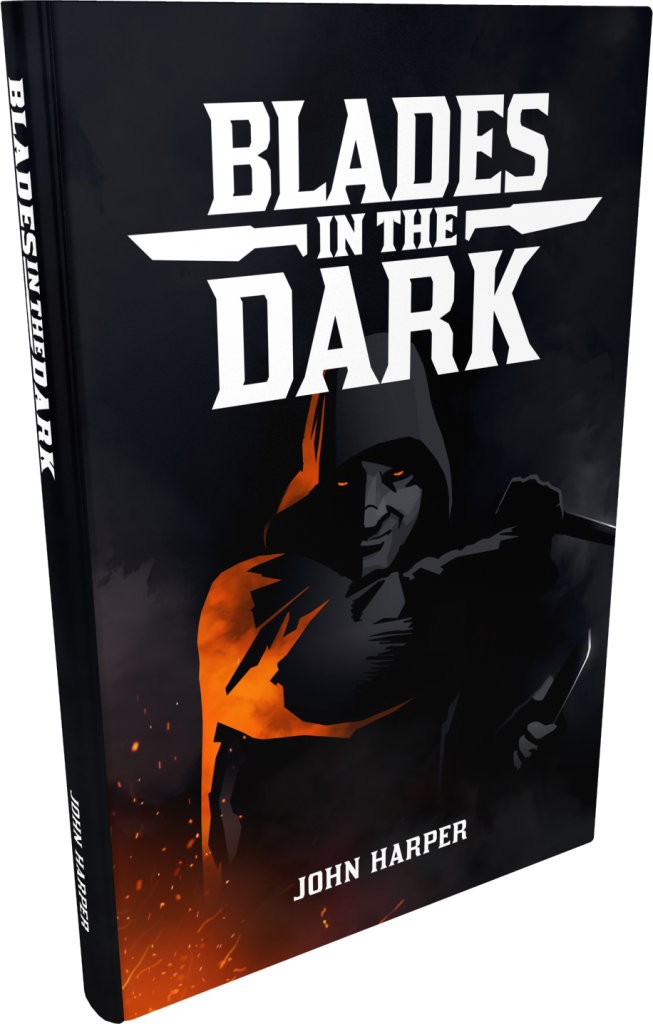 This type of seat of your pants play isn’t for everyone, and if Blades in the Dark has a weakness, this is it. It just isn’t the type of game you can sit down and fully prep for, and will in fact actively make you unhappy if you try. If you’re the type of GM who likes to have every detail ready beforehand, or the type of player who wants tight control over every moment of their character’s life, it’s a game that will frustrate you. Where Blades differs from other highly improvisational games is that it provides extremely specialized and well-presented tools to push its narrative relentlessly forward. It accomplishes the rare feat of being both very low prep and offering a satisfying degree of crunchy mechanical complexity.

Blades in the Dark asks you to play a constant, improvisational ping-pong game across the table, where the players say “We want X” and the GM is given wide latitude to say “Yes, but…” Its densely intertwined systems support deep, improvisational narratives that lends the “but” a huge amount of weight, as the PC’s claw their way to the top of a criminal food chain, or get ground down in the process. Both as a physical product and as a game, Blades in the Dark sets a new bar for role playing games.

Chris Wolf is the co-founder of PlayWell and an avid RPG enthusiast. You can find him on Twitter at @ChrisPerryWolf.