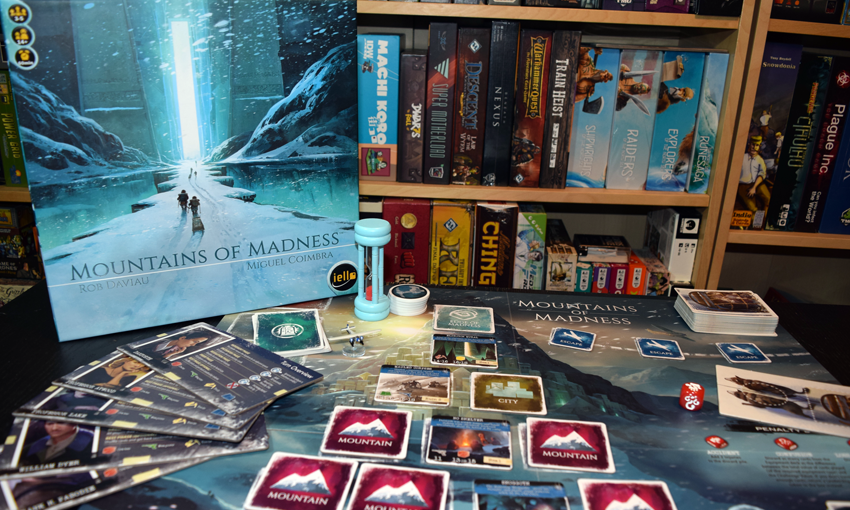 
Lovecraft games have been done to death.  No, beyond death – the gamerly obsession with the Cthulhu mythos may as well sleep beneath the cyclopean architecture of some ancient sub-aquatic necropolis, because that crap is eternal.  I’m not knocking it, not really, but when something is Lovecraftian in nature, it is so often, irony of ironies, incredibly predictable, which is nothing you’d expect to associate with the mind-crushing horror of the Great Old Ones.

Jess: Yeah, it’s not that I dislike the theme inherently, it’s just that so many of the games are paint-by-numbers horror.  Monsters, cultists, tentacles, elder signs.  But every once in a while, someone like Rob Daviau shows up with a new perspective, and we get something really unique as a result. 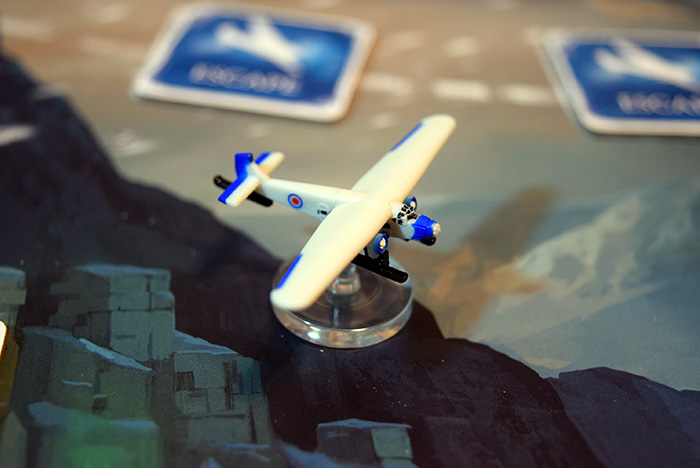 Despite the huge, colorful board, the airplane miniature, and all these tiles, Mountains of Madness is actually a hand-management card game.  In it, you and your team will scale a frozen antarctic peak, constantly managing their supplies in their efforts to explore the mountain, uncover ruins, and bring back specimens and knowledge – you know, classic explorer stuff.

Andrew: But where the Madness meets the Mountain is in the gameplay itself.  See, unlike most Lovecraftian games that drive your characters insane from the cosmic horrors they witness.  Instead, here we have the game aiming it’s madness at you, the player.  But more on that later… 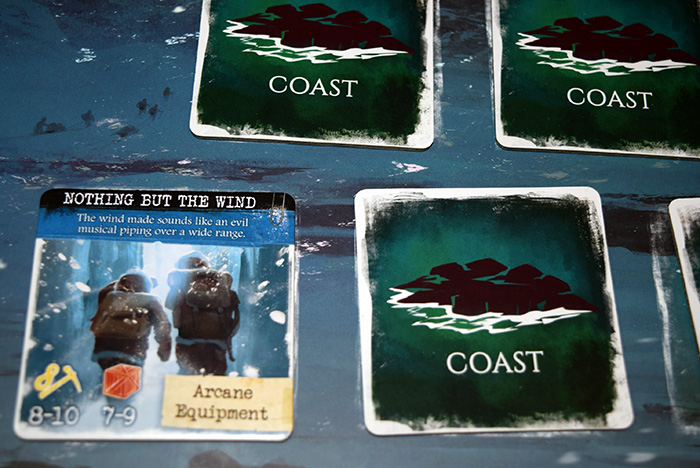 Mountains of Madness is played over the course of several phases.  Each round, one player will act as the expedition leader, having final say in where the team heads next, manage the use of the multipurpose Leadership tokens, and make decisions on who suffers if things go particularly badly.

The major phases are:

Jess: Let’s talk a little bit more about how the encounter phase works, because it’s definitely where the action happens. 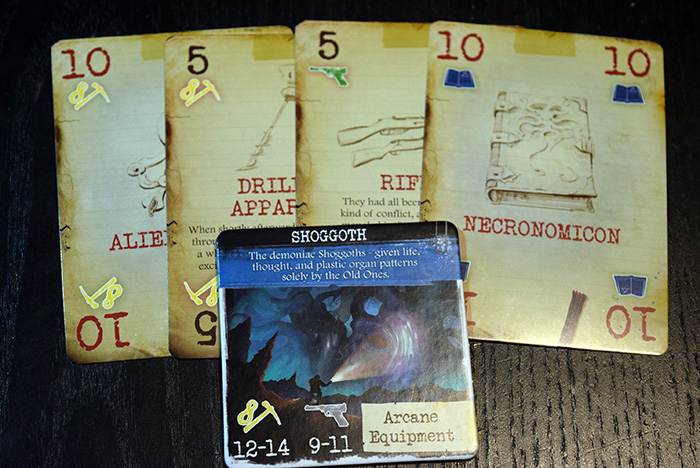 Each encounter is described by a series of symbols and numbers.  These icons will tell you what the group, as a whole, will need to discard from their hands of cards to overcome the challenge.  The symbols are either accompanied by a range of numbers or by an exact value, and in order to be successful, the group must discard cards which add up to those values precisely – over is just as bad as under.

There’s also a draw phase and an optional rest phase, but these three main phases are where the good stuff happens, in particular the Encounter phase because there are a few tiny wrinkles that can really amp up the difficulty of what is otherwise a simple matter of deciding how to play cards most efficiently.

The first obstacle to your team flying through encounters is that the only time you can discuss what cards you have in your hand (and discuss, NEVER show) is during the Encounter phase.  So until the team needs to figure out who needs to play what in order to get those 6 crates, 12 books, and 3 weapons the current encounter requires, you can’t tell them what you’re holding.

But so what, you may ask.  How does compressing the communication about your available cards affect the game?  Well, that’s where this cosmic torture device comes into play… 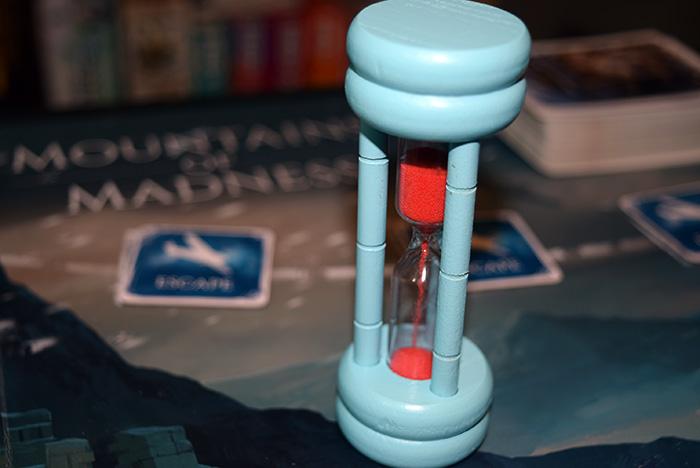 That’s right folks, you’ve got 30 seconds to do all the table talk you can – coordinate which players will contribute what cards, trying to meet the requirements of the encounter precisely, without going over or under any of the target values.

Jess: Tiny?  You call hidden information and a 30-second timer during a highly coordinated phase of the game tiny wrinkles?

Andrew: Well, compared to what comes next, yeah…

Success in your encounters is a good thing – you’ll earn either Relics (which you will ultimately need to win the game), powerful equipment cards, extra Leadership tokens, intel about surrounding tiles, or respite from your injuries. 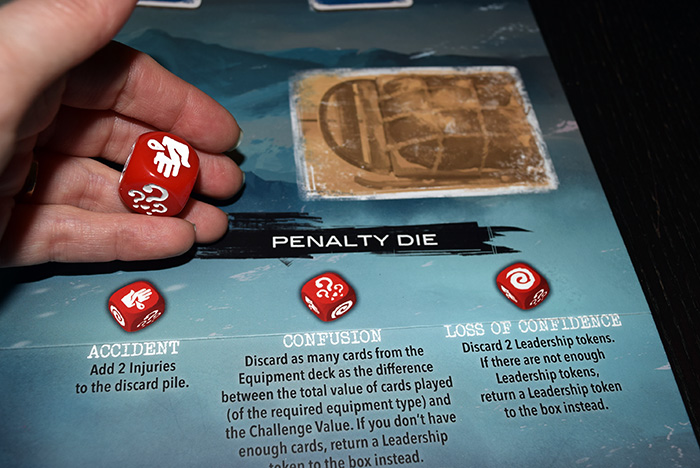 Failing any part of the encounter, though puts the leader in a tough spot.  For each part of the encounter your team fails to overcome, the leader must choose – either they roll the penalty die and live with the consequences (lost cards, injuries, lost leadership tokens) or they must pick a teammate to suffer, shall we say, a decline in sanity…

Because just shouting at your friends that you have a 4 climbing gear and a 5 crates and a 7 books isn’t confusing enough.  No, Mountains of Madness won’t be satisfied until you can’t figure out why your friends are walking circles around the table, or insisting that you shake hands before talking, or only referring to cards by colors and shapes, rather than numerical values. 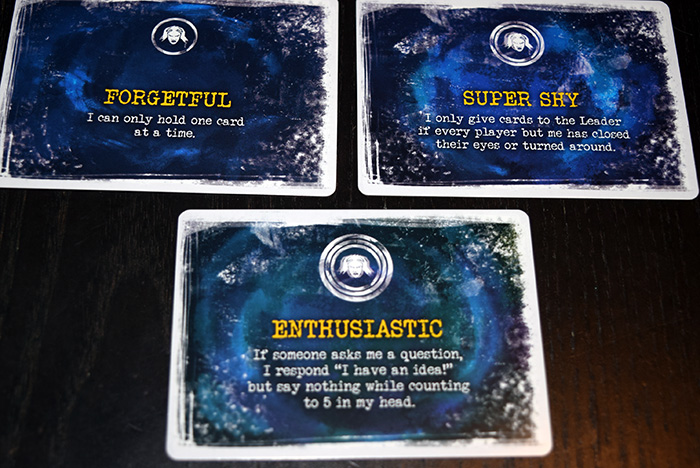 Coming in 3 ascending levels of severity, Madness cards disrupt not the rules of the game, but rather how you, the players, can interact with the game and with each other.  While some of them are relatively harmless and a few are outright goofy, each behavioral tick (which doesn’t get explained to the rest of the team) will add just a little more confusion to the communications thicket which is the Encounter phase.

Andrew: This is, bar none, my favorite aspect of Mountains of Madness.  I love that it messes with the metagame, complicating communication between players by imposing these weird, often very playful rules.

There are several ways to lose Mountains of Madness, but the only way to win is to make it up the mountain and escape with more Relics than injuries.  It’s that simple – though the game does score you at the end to see how well you did.

Jess: Normally, when there is scoring like this in a co-op, we kinda just ignore it – after all, winning can be hard enough as it is.  But again, the mechanics of Mountains of Madness are interesting – once you have your first Relic, you could theoretically sprint up the mountain, escape, and be done with it…

Andrew: Right, as long as no one is injured at all, and stays that way.  By grabbing more Relics, you increase your chances of a victory (and a good score besides).

Jess: Of course, Encounters might lead to Relics, but if they go badly, it won’t be long before you’ve got a table full of beat up psychopaths.  So its really a delicate, maddening balancing act. 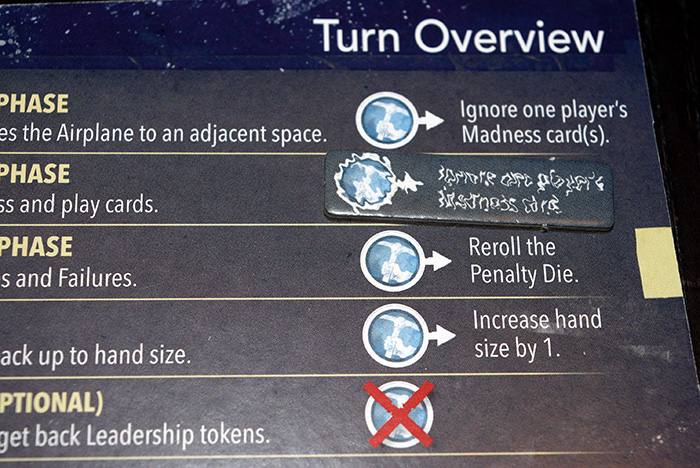 And it’s not just the Madnesses which mess with you.  For each relic you carry, you will lose access to a part of your player board, altering your ability to play the game.  Moreover, the higher up the mountain you get, the more insane the encounters become – sometimes the iconography and the colors don’t match, or are scrambled, or…

Andrew: Look, Mountains of Madness hates you.  It wants you to lose.  It’s not a hard game, not really, but it throws enough at you all at once that it feels like a pressure-cooker.  The ways in which it does this range from clever to brilliant, and we love how the game messes with you, rather than giving your character a sanity score and just deducting points from it or whatever.

Jess: And we love cooperative games, but for the folks who say they don’t like how one player might dominate a group, Mountains of Madness does a great job of removing this as a possibility without it feeling heavy-handed or tacked-on.  There’s no time to optimize, no way for an overbearing player to take control.  The insanity is so, well, freeing…

Mountains of Madness won’t be everyone’s cup of tea.  The mechanics are either going to inspire your group to have a maddeningly great time, or possibly just a maddening one.  But for us, Mountains of Madness is a fun, if delightfully frustrating, adventure to take on, and we definitely recommend checking it out!