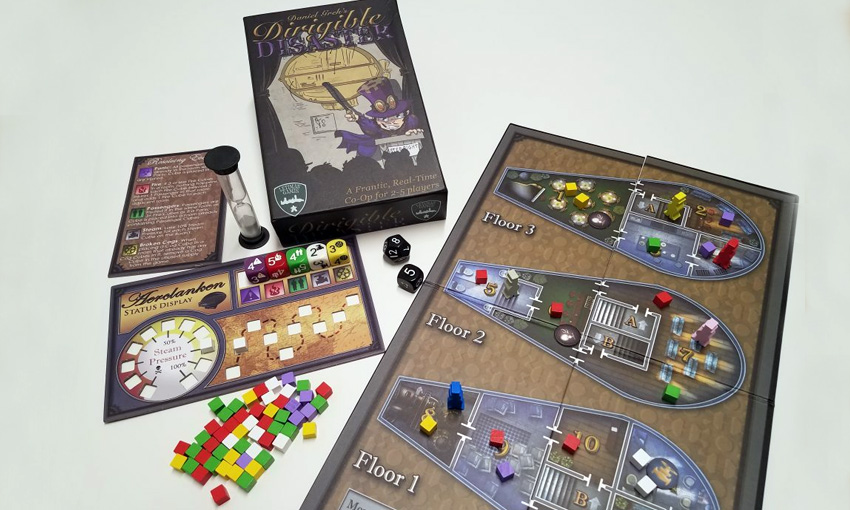 Dirigible Disaster is a steam-punk heart attack in a box.  Its quick playtime pairs perfectly with its frantic mechanics, rewarding you for fast plays and group coordination - two things that often work against each other, but combine perfectly here.

Isn’t it funny how, in some games, cubes are a good thing, and in others, cubes are a bad thing?  I mean, it’s fascinating, how we arbitrarily assign value to these simple geometric shapes, and in doing so add a tremendous variety to –

Jess:  WOULD YOU STOP PONTIFICATING, PLEASE?!? The main deck is on fire, we’ve got steam leaking from the engines, and –

Josh:  Gears loose on the lower deck and passengers on the observation deck are starting to panic!  THERE ARE CUBES EVERYWHERE AND WE NEED TO FIX EVERYTHING!!!

To look at Dirigible Disaster, to take in its cubes, its dice, the modest (but well-made) board, you would be forgiven for not immediately thinking of it as a coiled viper, ready to strike.  The premise is delightfully simple – the titular dirigible, the Aerclanken (say it out loud), is about to embark on its inaugural voyage, and we, the players, are tasked with making sure that the ship and its passengers arrive intact and without issue.

Andrew:  The problem with this, of course, is that the Aerclanken is a flying deathtrap of exploding cogs, burst steam vents, and shrieking passengers.  Each turn, we –

Jess:  FIRE ON DECK 3!  We need to get these people moving or they’re all toast!  PUN INTENDED!

Josh:  Pressure release was successful, but we’re still venting steam!  We need to-

*Ahem.*  As I was saying – Dirigible Disaster is played out over the course of 10 rounds; if the group can avoid meeting either of the loss conditions for that duration, they win.  Each round is divided into two phases.

During the first part of the round, things get worse.  Fires spread, panicked crowds result in injuries, and so on.  Then, each type of issue (fires, steam, cogs, passengers, and panic) has a die associated with it.  The players roll each of these dice (along with a 12-sided die that correlates to rooms throughout the ship) and places that many cubes representing those issues at those locations.

Andrew:  This is where one of Dirigible Disaster’s fail conditions might come into play – if you ever need to place a cube and can’t, the game ends immediately and the players lose.

Jess:  Maybe you should have spent less time distracted by the rules and more time fixing the dirigible! 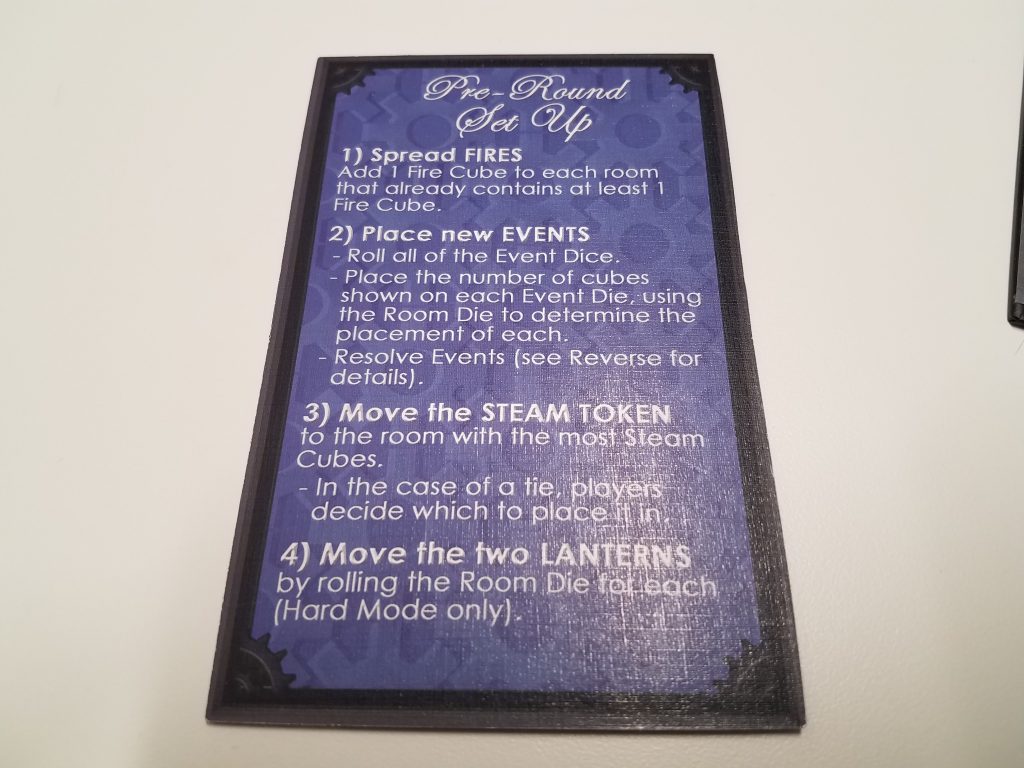 Once the ship is seeded with troubles, the second phase of the round is set to begin.  Players will have 60 seconds to do as much damage control as possible, running around the ship to put out fires, fix steam leaks, entertain irate passengers, calm panicked ones, and generally just try to keep everyone alive and the airship moving.

During the real-time phase, players take turns as quickly as possible, performing a single action apiece for 60 seconds.  These actions will be either a single movement of their character from one room to an adjacent one, or they can try to remove one of the threat cubes.

In order to remove a cube, a player must be in the room with that cube, announce which cube they are trying to remove (‘Fire!’, ‘Cog!’, etc.), and then roll a die, hoping to get equal to or lower than that color threat’s die for the round.  If they succeed, they remove a single cube.  If they fail, those precious seconds are wasted, though nothing else happens.

Jess:  Things get zany!  What I love about Dirigible Disaster is how players can take as many turns as they can possibly squeeze into that 60 seconds – but only one action at a time.  It makes it so frantic!

Josh:  Agreed!  I also think the mechanism around removing threats is really clever – During the first part of the round, a high roll means lots of cubes come out, which sucks.  But it also means that the target number for removing those cubes is easier to hit, making for a really slick auto-balancing mechanism. 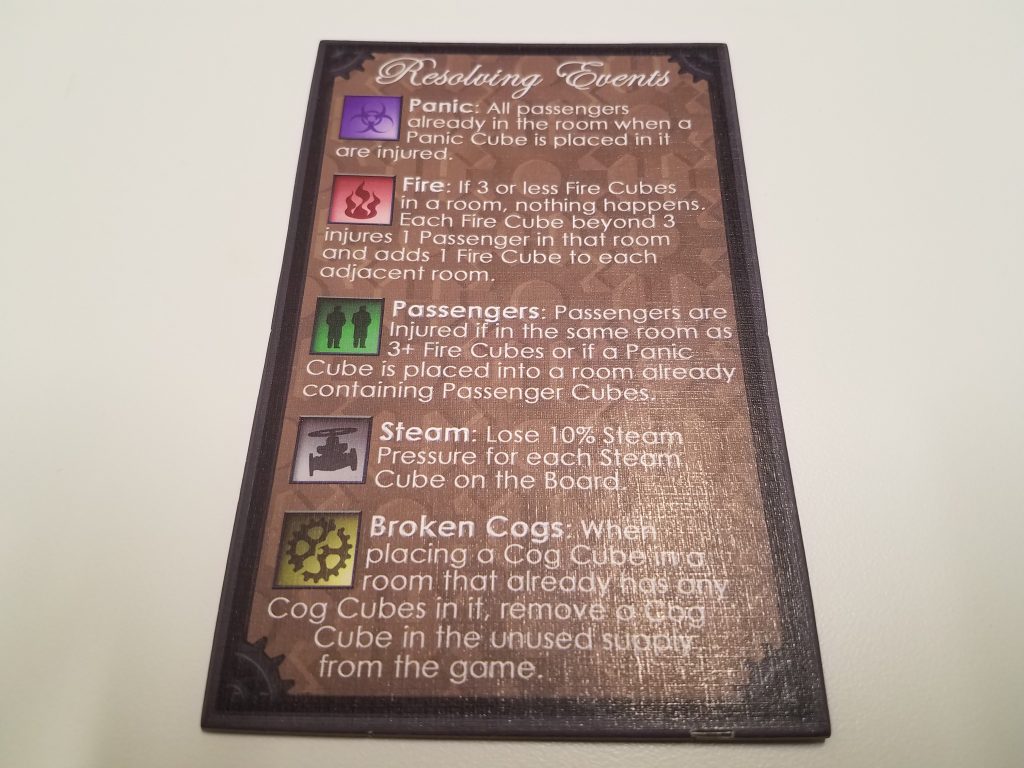 Aside from running around, trying to remove cubes, the other action players can take is to refill the airship’s steam supply.  This is critical, because each turn the steam gauge will fall by the number of white cubes on the board and should it hit zero, you guessed it, everyone loses.

At the end of the final turn, your team must survive the Aerclanken’s disastrous final descent.  Only then, if you haven’t lost yet, can you call yourselves winners.

Dirigible Disaster is one of those cooperative games – it’s reliance on dice means that you might never have a chance, and its real-time element only serves to ratchet up the tension.  We didn’t even play it it on the hardest difficulty setting – for those of you looking for an even more intense challenge, you can add a couple of ‘blackout’ tokens to the board, making all actions in those spaces much more difficult.

Andrew:  So do we recommend Dirigible Disaster?  Well, as is so often the case with cooperative games, it really depends on your taste.  If you don’t mind the arbitrary challenge of needing to roll dice under a certain value and the ramping difficulty of the ever-amassing pile of cubes, then heck yeah, Dirigible Disaster is a clever little package chock full of frantic fun.  If you want more control or strategy, then this one isn’t for you (there isn’t, for instance, any way to mitigate the luck of the dice), but at the pace the game moves, we didn’t mind that at all.

Our only other real criticism is that the sand timer included in the game is just too subtle – we were often so absorbed in our turns, we would sometimes miss when the timer was exhausted.  Instead, we recommend using a timer with an audible alarm, preferably one that sounds like a crashing airship or something.

Jess:  ENOUGH REVIEW TALK!  We’ve got fire in the upper deck and people who need to be moved!

Josh:  Steam’s looking really low, guys.  Someone needs to climb into the aft middle deck and fix it.  But the lights are out in that section, so-

Andrew:  WOULD YOU GUYS PLEASE PIPE DOWN AND LET ME REVIEW THE GAME?!?  I’M ALMOST DONE AND…and why is it so smoky in here?

Jess:  You might want to stop, drop, and roll, or something, yeah.

You can order Dirigible Disaster directly from Letiman Games here!