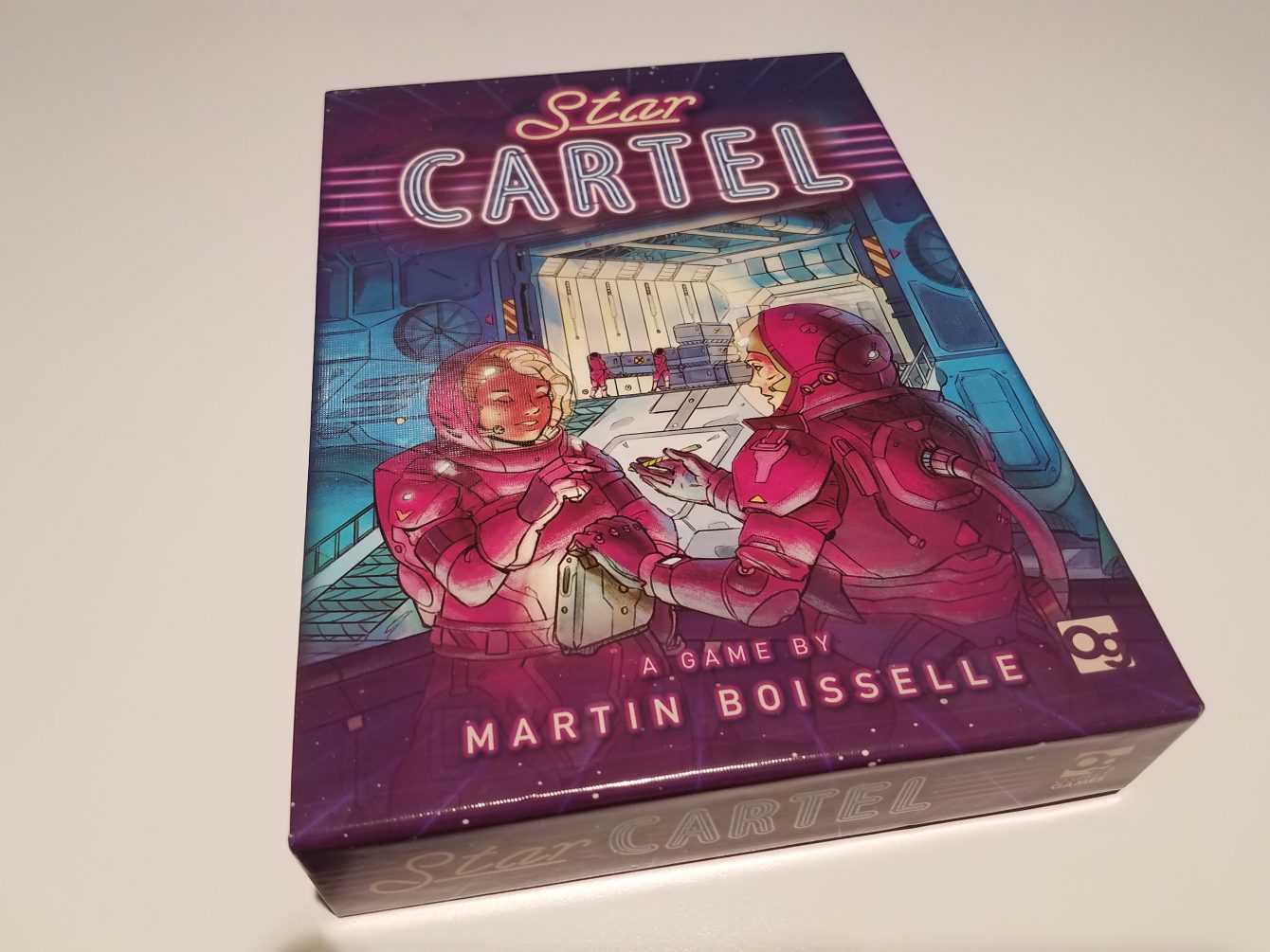 Star Cartel has a lot more going on under the hood than it might seem.  The potential strategic depth that Martin Boisselle has squeezed into these modest mechanics makes it thinkier than it has any right to be, and Osprey Games' signature quality of presentation never fails to impress.

Space.  Since the smoke of the first fires of our primitive ancestors drew their eyes upward to the heavens above, humankind has always dreamed of what might lie beyond the clouds, what troves of knowledge may be hidden among the jewel-like stars in the tapestry of the night sky.  With the advent of spaceflight, humans might finally get answers to some of our most ancient questions.

Jess:  Also, the chance to get, like, stupid rich.

Star Cartel, designed by Martin Boisselle, illustrated by Michal Niewiadomy, and gorgeously published by Osprey Games, is, at first blush, a simple set-collection/stocks game.  The basics are these: you and your fellow players are black marketeers, running goods for the titular Cartel.

Your goal is simple – stock your ship, deliver your goods, and skim just enough off the top to make a tidy profit.  However, to make it rich, you’ll need to be smart about the goods moving through the market (sorry, the Space Market); your stolen goods are only as valuable as demand allows, and your fellow smugglers will have an impact on the stocks each turn. 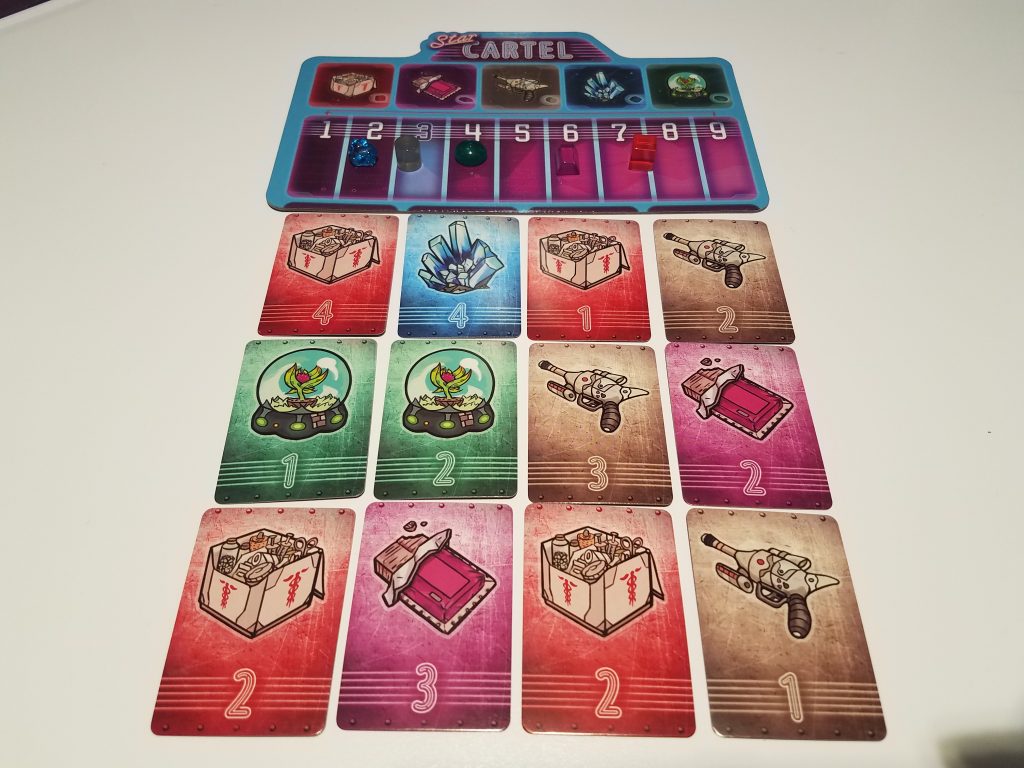 In the Loading phase of each turn, players will draw goods from the market.  The cards are set up in a 3×4 grid, and on each turn, players can take at most two cards, both drawn from the bottom row.  However, as soon as a card is taken, the two above it slide down, meaning your second pick could be the card which was above your first draw.

Andrew:  One of the first things which struck me about Star Cartel was that the per-turn choice seems so darn simple.  Draw a card, maybe draw another.  That’s it!  But each pull has ramifications which will probably have you doing some serious consideration.

Each of these good cards has a numerical value.  Your ship can only hold a limited total card value (everyone’s starting ship can hold 7).  As soon as your ship is at capacity (regardless of the number of cards it took to get you there) you will trigger the Deliver phase.

Jess:  And here’s where things get interesting, because those two sets of cards get discarded (you delivered them, after all).  But if you have a third good type, as in neither the highest or the lowest, you get to pocket those cards.  The image below will make it make more sense.

These cards, which go into your Stash, will be the main way that you will score points at the end of the game, with their value being determined by the state of the stocks when the game draws to a close.

Andrew:  This is fascinating, because it means you have to be incredibly strategic with how you load your ship.  Filling your ship with only one or two good types will not get you any cards for your stash – you need at least three types of goods to snag the surplus.

Jess:  Right!  But at the same time, the cards you pocket won’t be the goods whose value you affect with your delivery.  So sometimes you’ll want to deliver in such a way as to add cards to your stash, and other times you’ll want to deliver so as to raise the value of goods currently in your stash, or to drive down the value of goods that your opponents have been stashing!

Finally, after delivering goods, you get to ditch your current spaceship and trade up for a bigger one.  The bigger the ship, the more goods you can deliver at a time, and some ships even have one-time-use powers that let you change the way the game works for a turn, like loading a third card or swapping which good increases or decreases in a delivery. 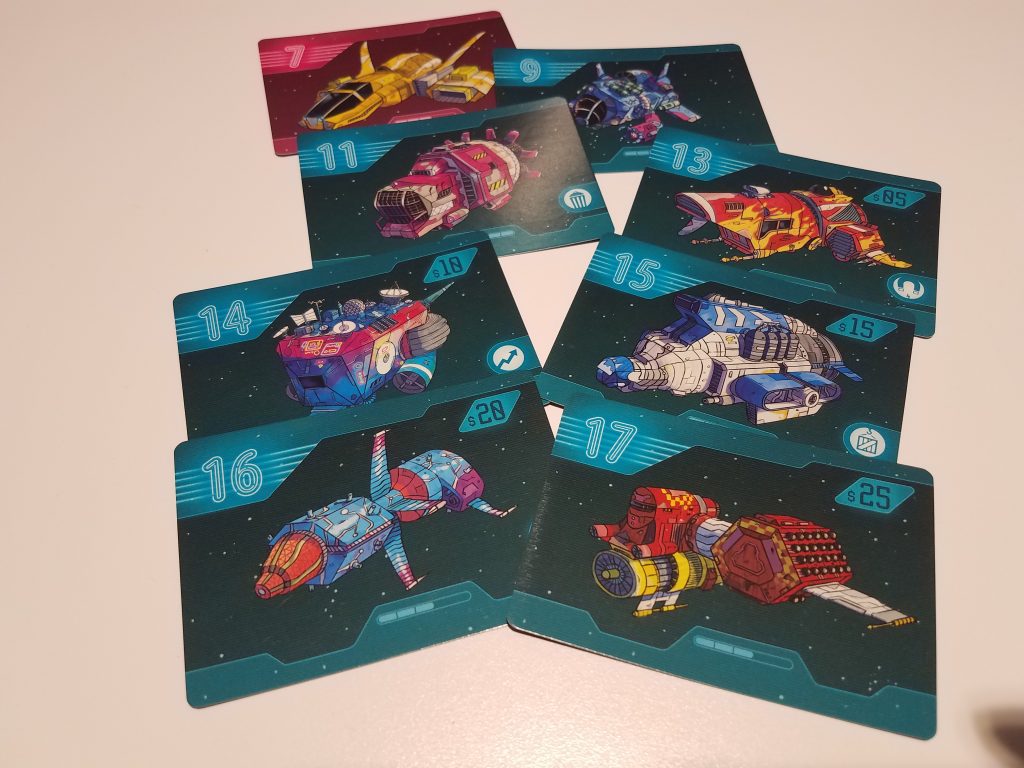 Andrew:  And better ships are worth points, too.  So while it’s tempting to be really meticulous and take your time loading cards carefully, a player who rushes ahead and does their first few deliveries faster than you will have a bigger ship faster.  It’s a balancing act.

The ship deck is also the game’s timer – once the last delivery is made and the most glamorous space vehicle claimed (for a good amount of points), Star Cartel draws to a close and final scoring is calculated.

Each card (regardless of its numerical value) is now worth a number of space bucks equal to its current stock value.  Those cards, plus the value of your current ship, determine the winner!

Andrew:  Star Cartel actually really surprised me.  There is more depth here than I first imagined, due to the whole top/bottom/middle mechanic of deliveries.  It’s not as simple as ‘load your ship with the best goods’ because those goods keep changing values!

Jess:  Not only that, but if a good gets all the way up to 9 points, if it ever goes up again, the market gets saturated and that good plummets back down to 1 measly point per card!  So while you want to push the value of the goods you’ve stashed, you don’t want to make it too easy for your opponents to crash the market and reduce your hard-stolen goods to near-worthlessness.

That effect, along with the market’s randomness, is greatly amplified with higher player counts.  Maxed out at 6, Star Cartel does get chaotic – too chaotic.  The strategy vanishes a bit with every additional player, as the market becomes far more erratic and predicting its vagaries gets both impossible and frustrating.  3-4 players seems to be the sweet spot, with any more being a little to uncontrolled for our taste.

Overall, Star Cartel is a treat – its aesthetic is really great (we love the blue and purple palette) and its gameplay is just the right balance between random and strategic.  It presents few choices but each choice matters, and because of the shared consequences of the shifts in stock value, every player is invested in everyone’s turn.  Star Cartel is a rare thing – a commodity speculation game that feels neither heavy nor slow, bringing together great visual style and subtle, puzzly gameplay.

Do we recommend Star Cartel?  For us, it was a surprise hit – we weren’t expecting the subtle nature of its gameplay, and we enjoyed the puzzle that it presented.  On the other hand, Star Cartel features a relatively finite path to success, and your ability to play the game well will rely both on your ability to control the value of your stashed cards and the luck of how the market cascades (and, of course, the impact your opponents have).  For some, Star Cartel might first come off as a bit aimless, and it’s easy to feel like you have little control over your own fate.  While we disagree (we find it to be satisfyingly strategic), we think its worth noting  that the game might not be for everyone.

Andrew:  Also, I wish there was a score pad.  Just a thought.

Those criticisms aside, Star Cartel really pleased us.  From its visuals to its mechanisms, we found there to be a lot to like in this small, well-made package, and we recommend checking it out.