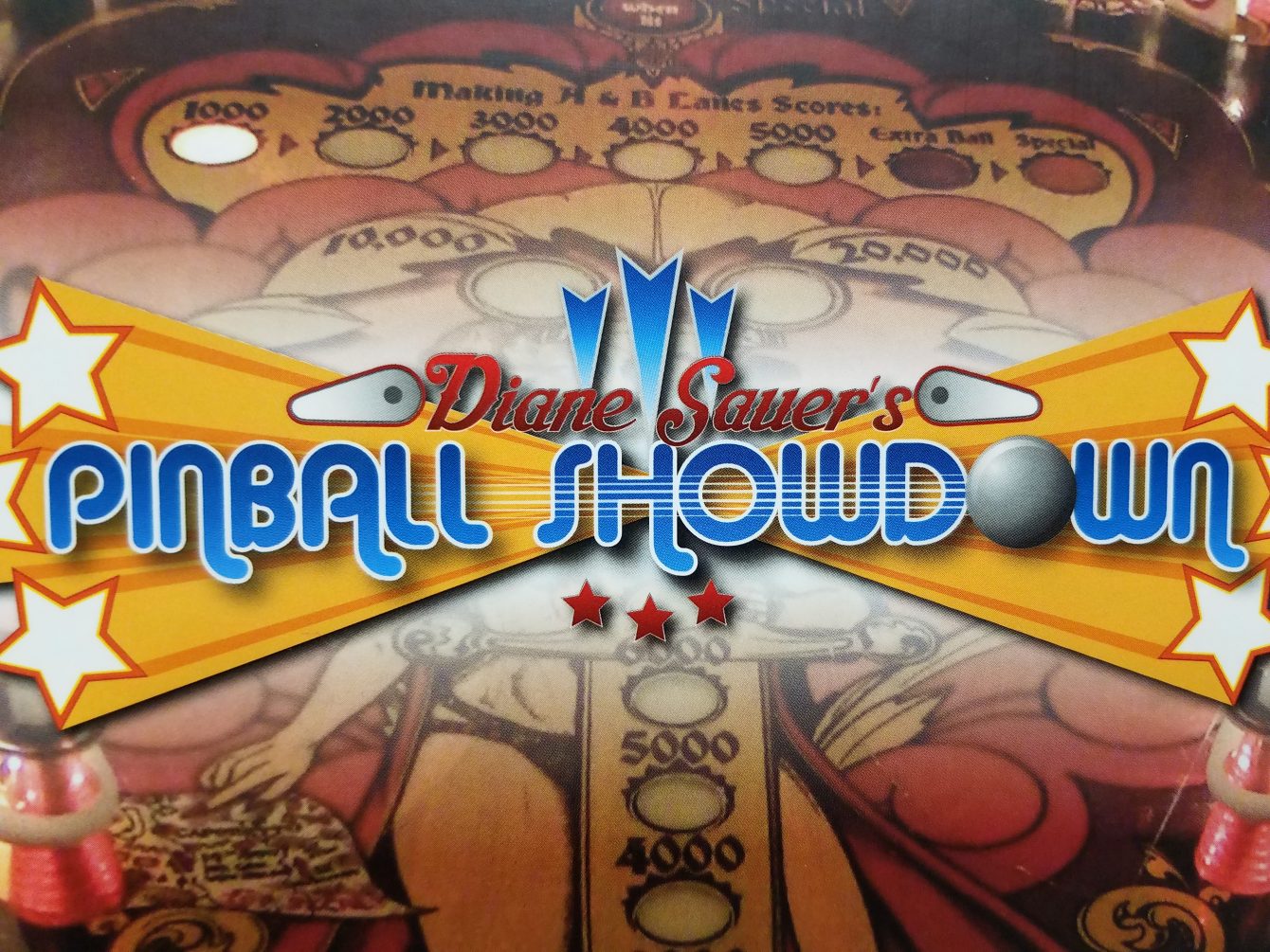 Pinball Showdown probably isn't the game you would expect.  However, despite the theme/gameplay mismatch, Pinball Showdown has some really clever design choices under the hood, and a really playable take on auctions and set collection mechanisms

So, full disclosure here – I love pinball.  I grew up in the heyday of the NES/SNES console lifecycle, so I did plenty of video game playing at home, but going to the arcades was still a thrill.  But my young self didn’t go there for the awesome digital cabinets (though those were great); instead, what fascinated me were the pinball games.  I loved them then, love them now, and when I saw Pinball Showdown out of the corner of my eye while walking around Gen Con, I stopped dead in my tracks.  A pinball card game?  Over the years, I’ve played so many digital versions of pinball, but I had never seen an analog version (ironic really, if you think about it).  I was immediately intrigued, and just had to check it out.

Jess:  The question, of course, was how the heck was designer Diane Sauer going to translate the frenetic action of pinball into card form?

Andrew:  Right?  I mean, when I imagine a pinball tabletop game, I imagine, well, pinball, or at least some lesser facsimile thereof.  Like, there probably has to be a ball at least, right?

But whatever I might have been expecting, Pinball Showdown was…not that.  The premise is that multiball has just begun, and each player is trying to out-score the others.  Except in a somewhat bizarre twist, the players are the pinballs themselves, and players will have to balance speed and control as they aim themselves at various point-scoring bumpers, careening into one another and racking up huge bonuses…

Andrew:  …which will all be accomplished using Pinball Showdown’s central gameplay mechanic – an auction.

Andrew:  I know!  Again, I have to say it – whatever I might have been imagining as to how they’d translate pinball into a card game, auction mechanics are basically the last thing that would come to mind.

So how does Pinball Showdown work?  Each player starts with a hand of cards.  Each card depicts a piece of the pinball machine’s interior – bumpers, flippers, targets, ramps, and more.  The lead player will reveal a card from the deck, and then each player will secretly add a card from their hand to the auction pile (this pile is shuffled to obscure who donated which card, for strategic purposes).  Players will then bid on which card they want to claim for the round.

The anatomy of each card shows the card’s name on top, along with the point value that the card is worth if you score it.  On the right side is the number of copies of that card in the deck.  On the left side has two pieces of information – the speed change the card will cause, and the required speed to score it.

Andrew:  Intriguingly, Pinball Showdown has players keeping track of two attributes that their ball has at any given time – speed and control.  These two values, depicted by tokens, are on a natural balance – when you increase in speed, you lose control, and vice-versa.  You will track this by flipping tokens over to their appropriate side whenever a change is called for.

Jess:  So the whole speed/control thing is pretty simple, but it took us a little bit to wrap our heads around it.  Control tokens are used as currency when bidding on cards – after all, the more control your (telekinetic, sentient) pinball has, the easier it will be for it to aim at the targets it wants.  But in order to score targets, your ball will need to be going at the appropriate speed, matching the conditions on the target card. 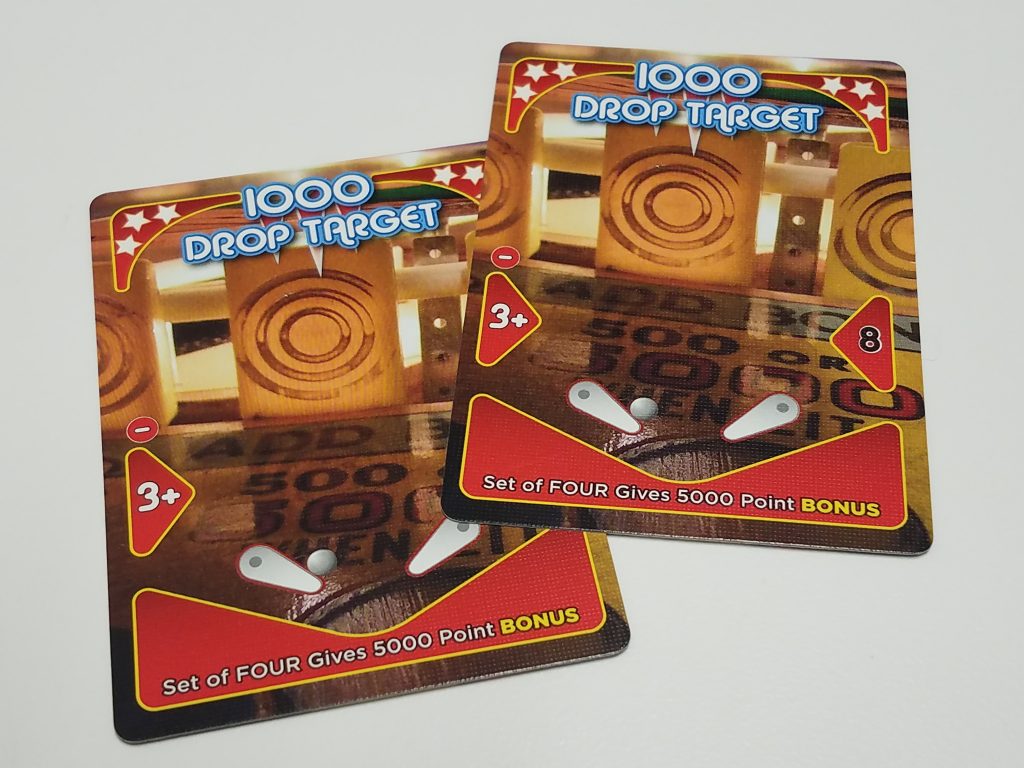 After the auction round is complete, players claim the cards they bid on and won.  If at that moment they meet the card’s speed prerequisite, they add that card to their scoring pile, and adjust their speed according to the symbols on the card; green cards, for example, increase a player’s speed (and thereby lower their available control tokens).  Red cards to the opposite, etc.

Once players have all resolved the effect of their scored cards (or loses speed because they didn’t meet the speed requirements of the card they got), the next round of auctioning begins.  Between rounds, players will check to see if they can claim one of the Combo cards, based on having claimed certain (you guessed it) combinations of cards.

If any Combo cards do get claimed, get the jukebox queued up with The Who because Wizard mode gets activated the following round.  All players will score double points for cards claimed during Wizard rounds.

This pattern of auction/resolution continues for either 10 turns or until a player ends their turn with zero speed, though this will only end the game after the 6th round.

Jess:  So, what did you think of Pinball Showdown?

Andrew:  Honestly?  I’m almost completely unsure.  I mean, at the risk of repeating myself, this just wasn’t what I imagined a pinball game would be like.  It’s not fast-paced at all; instead, gameplay in Pinball Showdown is entirely focused entirely on being clever and effective in your bidding strategy so that you’re scoring cards to get lots of points.

Jess:  And trying to get those combos if you can, and capitalizing on Wizard mode when it gets activated.  I know it wasn’t what you expected, but does that mean you didn’t enjoy it?

Andrew:  Well, at first, I sorta didn’t, but mostly, I think, because of those missed expectations.  And the more I play it, the more I see the simple elegance in its design.

The cleverness of Pinball Showdown comes from the balance between control and speed tokens.  These two values push and pull on each other – you want a high control rating because that will give you lots of bidding power in the auction.  On the other hand, you need to be mindful of your speed, because without managing it, you won’t be scoring those cards that you work so hard to get.

So the interplay between these forces is the heart of the game – it will dictate which targets you aim for, but it will also inform your auction strategies; whenever someone out-bids you for a target, you get all your spent control tokens back – and can flip as many of them as you want over to speed (since another player essentially smashed your ball out of the way).  So sometimes you might even bid on a card you know your opponent wants in order to force them to give you the ability to tune your speed for future rounds.

Andrew:  Honestly, I think Pinball Showdown is more clever than it has any right to be.  I think the design is intriguing and unexpected, and very playable.

Andrew:  Yes!  Mostly.  I do wish there was something a little faster-paced about it, though the game itself doesn’t overstay its welcome at all, so long as you don’t have any AP-prone bidders.  And, though no fault of Pinball Showdown’s, auction games aren’t usually my favorites.  However, the way Pinball Showdown handles itself feels really tight, and despite the strange mismatch of mechanics and theme, I actually think it works quite well, and I’ve had fun every time I’ve played it.