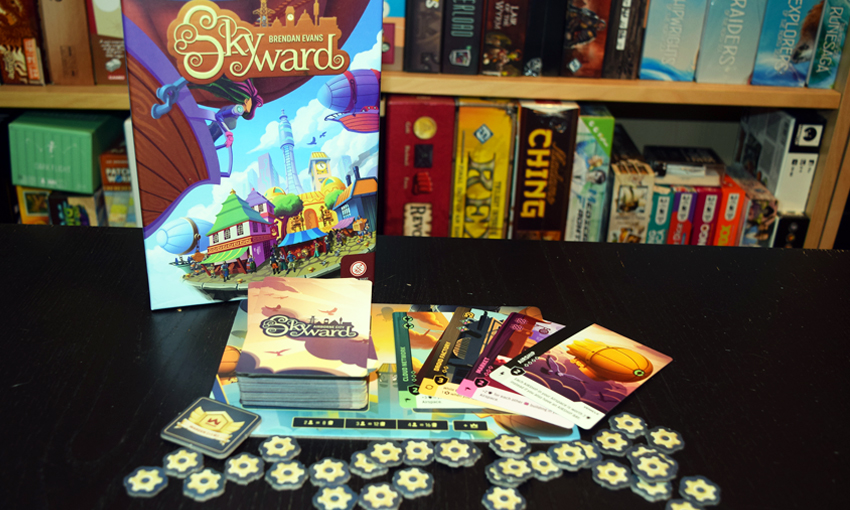 Skyward is a drafting/tableau building game that features great art, simple gameplay, and a unique theme.  But while it's perfectly playable at 2, it's not without some real issues at higher player counts.

Recently, we’ve played, reviewed, and enjoyed a lot of games that feature the ‘I cut, you choose’ method of card drafting.  A few great examples of this mechanic done well are New York Slice and Sundae Split, both of which are set collection games where the active player divides up the round’s take and then gets left with whatever pile their fellow players didn’t choose.  The strategy in these games tends to be elegant and simple, with quick turns and really accessible gameplay.

Andrew:  Skirting dangerously close to a pun, New York Slice and Sundae Split make for ideal fillers.  Anyone can play them, they work at every player count, and they’re really great games built around this ‘I cut, you choose’ style of drafting that works really well.  Skyward is another game in this genre, though it forsakes the oddly-consistent food theme in exchange for some really attractive sci-fi visuals.

Jess:  I sense an impending ‘but’.

Andrew:  Well, yeah.  But let’s do the overview thing first. 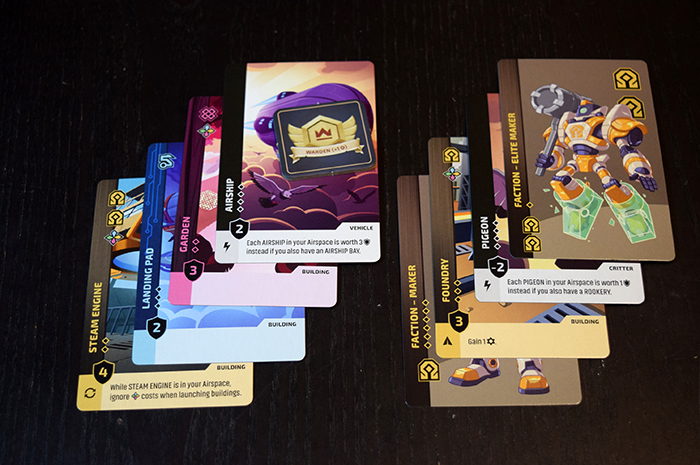 Skyward is also built upon this same drafting/splitting mechanism.  Thematically, players are working with the four factions of the city of Skyward, each trying to accrue the most points by building a tableau (their ‘airspace’) of flying structures and airships.  The art in Skyward is great, conveying a really cool futuristic aesthetic to go along with the theme.

Andrew:  Of course, the theme is quite pasted-on.  For as attractive as it is, it doesn’t do much to impact the gameplay at all.  Which is a shame, really, because there is some interesting set design going on here.  But it certainly doesn’t detract.

Each round of Skyward follows a simple structure.  The lead player (called the Warden) will draw a number of cards based on the player count.  These cards come in several different types:

Jess:  Ok, I don’t care what sort of academic critique you’re about to make of Skyward – jetpack cats are forever brilliant and I won’t hear another word on the subject.

The Warden will sort these cards into a number of piles equal to the number of players (also adding the Warden token to the mix), and then each player will take a pile.  This is where the strategy of the game lies – the warden must anticipate which cards players might want and how best to divide them up, while keeping in mind that they will likely end up with the least desirable pile.

Once players have taken their cards, they will have the opportunity to spend faction cards to launch buildings, as well as add creatures and vehicles to their airspace.  Players can also discard cards they don’t need in order to get cog tokens, which act as wild currency for launching structures (whoever picks up the Warden token also gets a free cog).

Once everyone has resolved their cards, the draft begins again with whomever took the pile with the warden token acting as the new lead player.  Gameplay continues until either the structures deck has been milled through or any player ends their turn with 6 structures in their airspace.  At that point, scores are tallied and a winner declared.

Jess:  The mechanics in Skyward work pretty well.  The draft lets you amass cards for building out your airspace, and even if you end up with a handful of cards you don’t care about, you can always toss them for cogs.

Andrew:  And the structures themselves often have simple, satisfying synergies, like how the the Cloud Network card is worth more points if you also have a Data Node, or that the Airship Bay both increases the values of your airships and lets you steal an airship from an opponent.

Jess:  There’s even a structure that will let you turn those annoying pigeons into positive points!  Though I still think the Rocket Cats rule.

Andrew:  Totally!  It’s really satisfying when a combo works out, and your strategy nets you a boatload (rocketload?) of points.  Skyward can have a nice, smooth arc of gameplay with lots of little victories along the way to the game’s conclusion.

Andrew:  But it’s not without some real issues.

First and foremost, the drafting mechanism works really well with two players, which is a rarity.  Those other games we mentioned at the top of our review work best at higher player counts, and drafting games rarely play well (if at all) with just two players.  Skyward  manages to bypass this typical limitation.

Jess:  Which is, of course, a mark in the game’s favor!…However, once you add more players beyond two, things get kinda awful.

As we mentioned before, the number of cards being drafted each round varies by player count.  At two players, the warden will have to sort through and split 8 cards – in order to do this effectively, they will need to keep an eye on their own burgeoning strategy, their current airspace, the airspace of their opponent, and a sense of what cards both players might be holding and might still want.  Sure, there’s some downtime, but it’s 8 cards – that valuation process might take a minute or two, but it’s not that bad.

However, at three players, the card count jumps to 12, and at four players, 16 cards per round.  This is, simply, way, way too much to process.  To keep track of all player tableaus and scoring strategies, to evaluate all those cards against your own needs as well as the wants of your opponents, to divide them in such a way that no one player manages to get a disproportionate value and to somehow also do all that so that you manage to get the cards you need as well is a simply untenable task.  Above the two player mark, Skyward becomes a miserable slog, losing the brevity and simplicity that make it perfectly playable at 2.

Andrew:  It’s not just the time lost and the strategic mire the warden finds themselves in every turn.  At higher player counts, you are going to mill through the deck much faster, meaning you’ll have fewer opportunities to actually enact any of the strategies you might be working towards, not that you’ll have much control over anything in the game at that point.

Jess:  For real.  The game is an unplayable mess at max players, and not much better at 3.  The rules even have an optional 5th player variant, which features absurd 20 card drafts.  No thanks.

Andrew:  Yeah, I think Skyward really needs to be relegated to the 2-player pile.  More than that, not so much.

Taken as it is, Skyward is an attractive, playable game.  Its theme makes it unique and at 2 players, it has a fairly good balance of strategy and randomness (the luck of the draw will definitely factor into your whole game – some strategies hinge on getting a particular structure in the air and it’s possible you’ll simply never see it).  With its weaknesses in mind, it can certainly still be enjoyed.

Skyward comes with two small in-box expansions.  The Allegiances expansion adds cards to the deck which are potentially worth lots of points, so long as you can meet their faction symbol requirement and are lucky enough to actually get your hands on them. 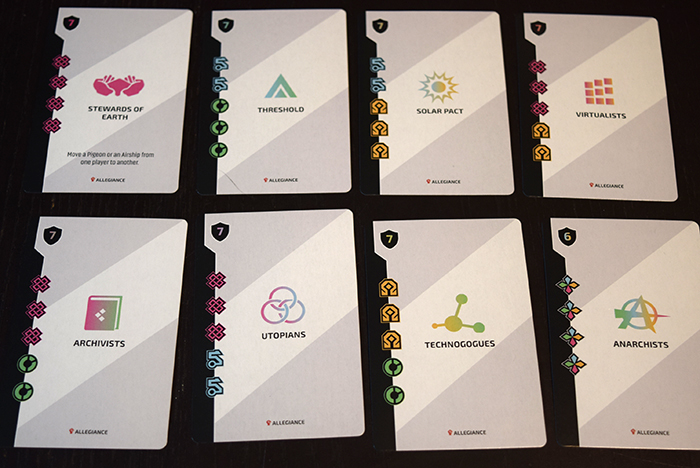 Jess: I found that Allegiances doesn’t do much for the game.  It adds one more scoring opportunity, which is cool, I guess.

The second expansion, Discord, adds a handful of powerful cards to the structures deck.  These cards all provide immediate benefits to the player who drafts them, but the player with the most Discord cards at the end of the game takes a scoring penalty.

Andrew:  For me, the Discord expansion was definitely the more interesting of the two, adding a little more cost-benefit strategy to the splitting up of cards each round.  But, again, that means a lot less at higher player counts.

Overall, we did enjoy Skyward when we played it with two.  While there isn’t a lot of strategic depth, it can be entertaining and is certainly incredibly well presented.  Keep this one away from higher player counts (or, warden help you, AP-prone players), and it could make a neat addition to your library.