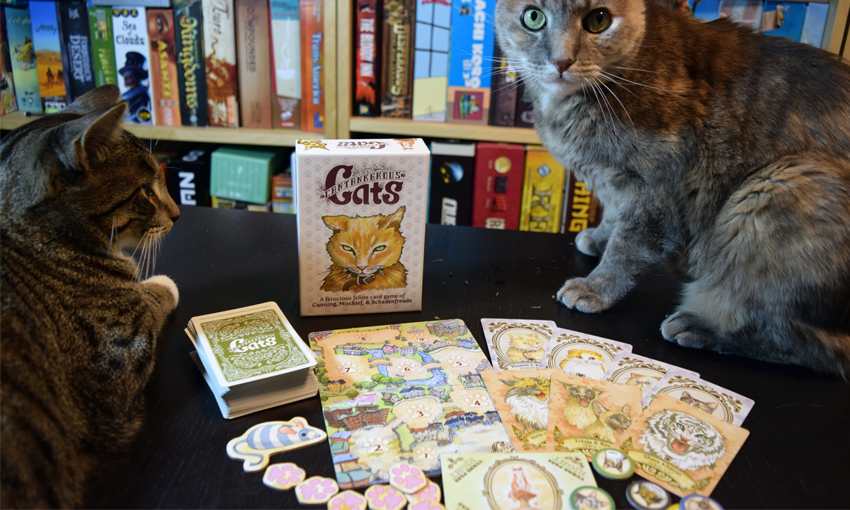 They are warm, cuddly piles of purring sweetness, mischief, claws, teeth, and a killing instinct that is the bane of all tiny and pounce-able creatures. Cantankerous Cats encapsulates the cat experience in a hand management, take that game where the players become devious cats looking to cause as much mayhem as possible without having their “hoomin” kick them out of the house.

Andrew: So, it’s basically a game about cats competing to get away with being little jerks by also being as adorable as possible.

Andrew: Sure, that checks out. 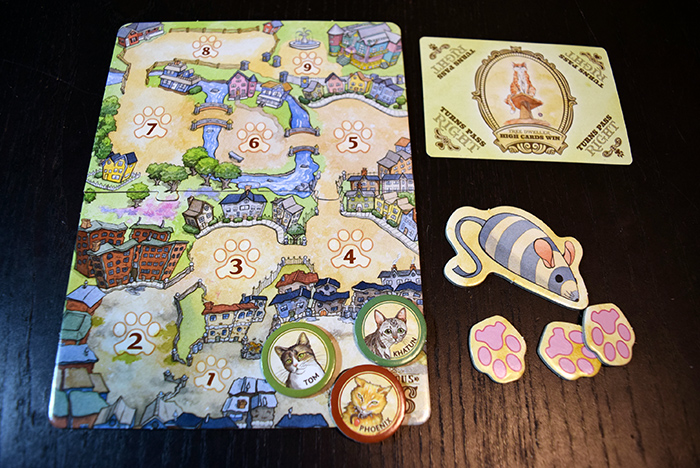 The goal of asdf is to collect 9 mischief points while holding the cat toy (the first player marker). Players will start as a domestic cat with a house (your tableau) and a hand of 6 cards.  A turn consists of drawing 3 cards, taking 2 actions, and then discarding down to five cards.

The actions you can take are: 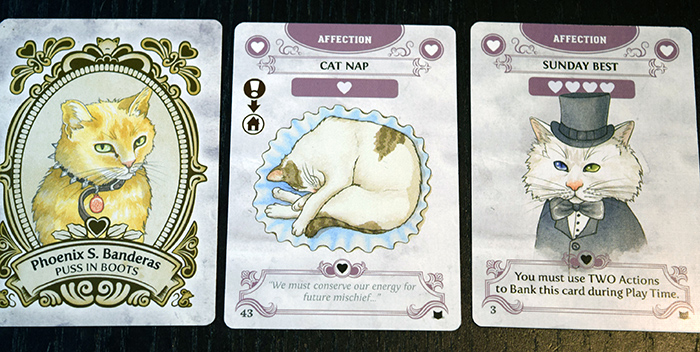 Affection cards are the currency of Cantankerous Cats. You need to convince your “hoomin” that keeping you around is worth all the trouble you cause. 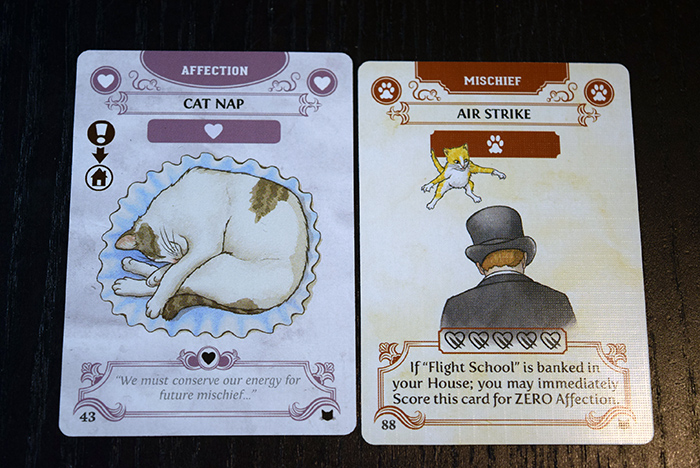 To score mischief cards you must pay for the card in affection. If you do not have enough affection to pay for a card then your “hoomin” will kick you out and you will go feral! We’ll get back to feral cats in a second, but first, let’s talk about where the action happens: Pouncing!

Pouncing is your primary method of messing with the other cats – after all, if everybody just banks affection and scores mischief, asdf would be little more than a luck-driven race.  By pouncing, you stand a chance of slowing down your rivals’ progress to that 9 points for victory, though there’s a bit of risk involved.  There are 2 methods to pounce: 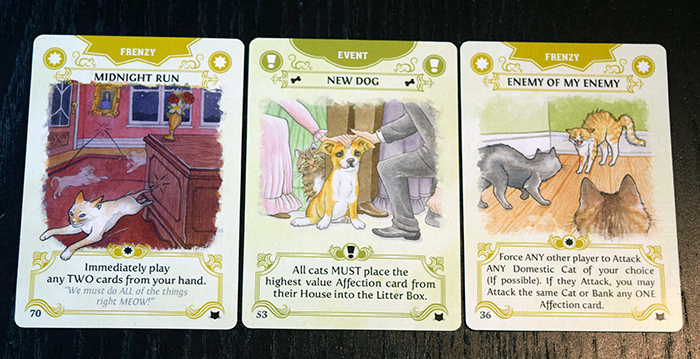 With incident cards, you just do what the card says. Some cards will have you stealing affection or cards from other players, canceling card actions, blaming mischief on the dog (thus nullifying its worth), and so on.

Andrew: A well-timed Incident can seriously derail another player’s plans – knowing when to pounce is the key to maximizing the effect of these cards.

If you attack with a mischief card, you can only target the cat holding the cat toy. Your opponent must play enough affection to pay for the card. If they cannot, they go feral. If they can, then they will score 1/2 the cards value rounded down. It a gamble as you never know which cards your opponent is holding, but making your opponent go feral can delay their win. 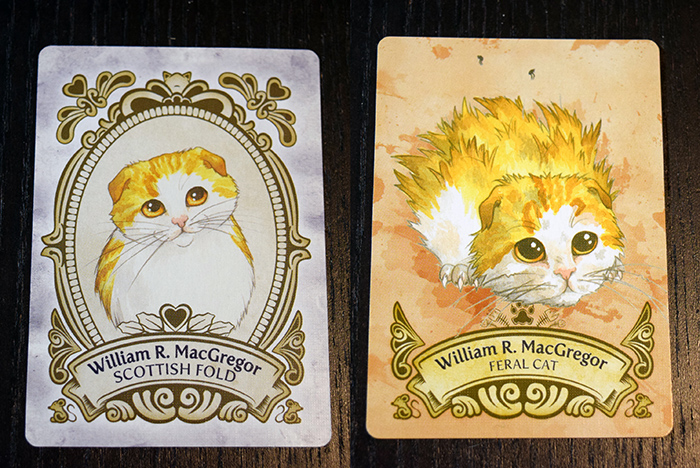 Feral cats lose all of their banked affection, can only draw 2 cards each turn, they cannot score mischief points, and now pounce tokens cost 3 cards for them to purchase. It’s not all bad news for these homeless kitties though. Ferals cannot be targeted with mischief cards and you can pounce any domestic cat for free. To get adopted and put those feral days behind you, you only need to bank four affection points.

As I said before, if you manage to score 9 mischief points while holding the cat toy, you win!

Jess: Well, I definitely love the theme – you know kitties are my jam, and I love the idea of them needing to bank affection in order to compensate for being little fuzzy jerks to their “hoomins”.  But the gameplay is where Cantankerous Cats loses me. 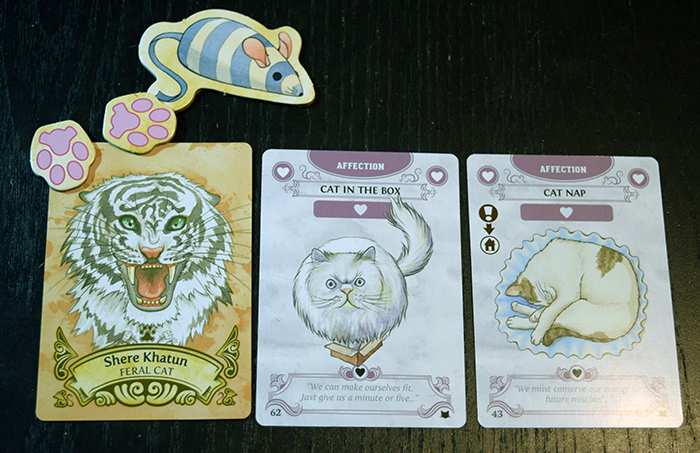 A critical part of Cantankerous Cats’s strategy is attacking other players.  If no one bothers to do so, the game is short and mostly meaningless.  Instead, what asdf really wants you to do is to claw your way past the other cats, shanking them whenever possible on your way up the score ladder.  Games have the potential to get vicious, not to mention the obvious leader-bashing as one player finally manages to get to 9 points and must fend off pounce after pounce by players until they manage to get the cat toy and win.

Jess: Yeah, it bums me out, but Cantankerous Cats just isn’t for me.  It’s a mean game about cats, and while the tagline reads ‘A Ferocious Feline Card game of Cunning, Mischief, and Schadenfreude’, well, it’s a little too much of the third for my tastes.

Andrew: I agree.  On the other hand, for players who like a take-that game, Cantankerous Cats is certainly charming in its theme and presentation.  It’s just important that you know what kind of game you get before you adopt. 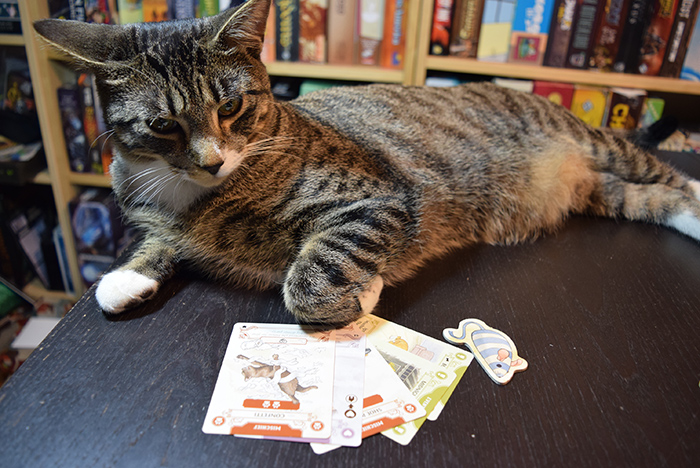